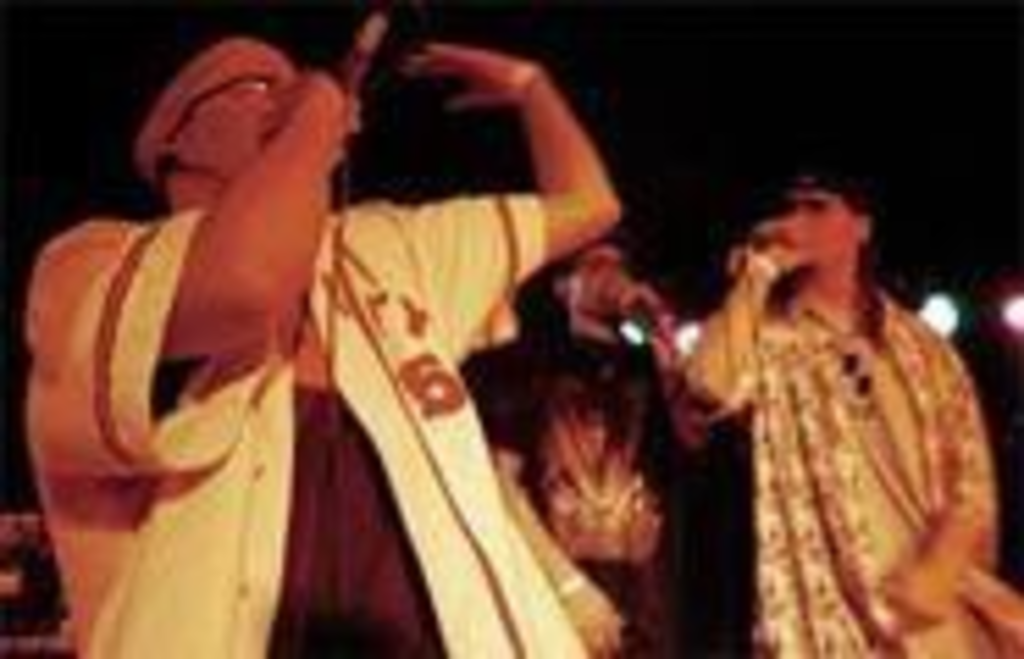 Any time you shell out more than $10 to see bands at The Bottleneck and you know only one or two of the four groups on the bill, you’re taking your chances. A $12 hip-hop show, given that this is a genre in which national acts rarely devote more than 45 minutes of stage time to the Midwest, is even riskier. Luckily, a solid opening performance by last summer’s winner and runner-up of the local MC competition provided much-needed reassurance. There was no animosity between the victor (Mac Lethal) and the silver medallist (Approach), who are partners in another local group, and the duo put on a surprisingly tight set of intelligent hip-hop. The smooth beats moved at a sloth’s pace underneath the charged lyrics, which ranged from quasipolitical to quasicomical (you couldn’t see me if you bought two I’s from Pat Sajak), suggesting the two MCs and one DJ had spent some quality time together since last summer. This was the first hip-hop show I’ve attended since Eminem hit the streets where not one single person bothered to compare the white MC (Lethal) to Dre’s prodigal son, who is currently a 7 to Vanilla Ice’s 10 on the hip-hop dis chain. That alone speaks volumes about the crowd’s response to this promising local duo.

After records and people spun (breakdancers were out in full force), it was time for Seven Fold Symphony to try to pick up where Lethal and Approach left off, but lyrically they couldn’t. Seven Fold Symphony has taken on the ambitious and unenviable task of rapping over live instrumentation and one turntable, à la the Roots, but that’s where comparisons to Philly’s first family ended tonight. Seven Fold struggled to keep all of its elements together. While the band would be hitting its stride (which they did often) and laying down some dirty grooves (which they did even more often), the DJ and MCs were constantly hustling to keep up. All in all, Seven Fold’s freestyle was somewhat disappointing, but only because flashes of brilliance revealed the group’s unrealized potential to become a hip-hop force.

DVS Mindz didn’t let Seven Fold’s trials keep them down, as the now-veteran crew from Top City threw down its usual set of intense rhymes laid over a few simple beats. There are two schools of thought on the Mindz: those who think DVS Mindz is the area’s tightest rap group and those who think their rhymes are unoriginal and their beats add nothing to the songs. There’s some merit to both arguments. Lyrically, DVS Mindz rarely venture into uncharted territory, but few people have covered these topics with the same level of ferocity and emotion. As for the beats, not everyone wants to sound like the Fresh Prince when they take the stage, and the raw edge DVS Mindz possesses when it takes the stage proves more than parents just don’t understand.

By the time the Arsonists started their set, some three and a half hours after the show got under way, the stifling heat in The Bottleneck was starting to affect everyone, including the b-boys who typically cut a rug in front of the stage between sets. However, this New York hip-hop collective’s inspired performance brought even the most blunted fans to their feet. In what was both an homage and a ploy to get the crowd involved, the Arsonists embarked on a hip-hop time-traveling extravaganza. Starting with one foot on Sugar Hill and the other on Cypress Hill, the Arsonists hit almost every b-boy and Tribe before they ended with a nod to the man considered by many to be rap’s next KRS-One: Mos Def. The Arsonists’ little game worked like a charm, as not even the most devout hip-hop purists can hold a grudge when the floor and everyone them is bouncing with the beats. With that hourlong set, the Arsonists lived up to their billing as one of the best live bands in hip-hop, and they didn’t even have to play their own songs.