The Appleseed Cast’s Chris Crisci on The Fleeting Light of Impermanence, out Friday 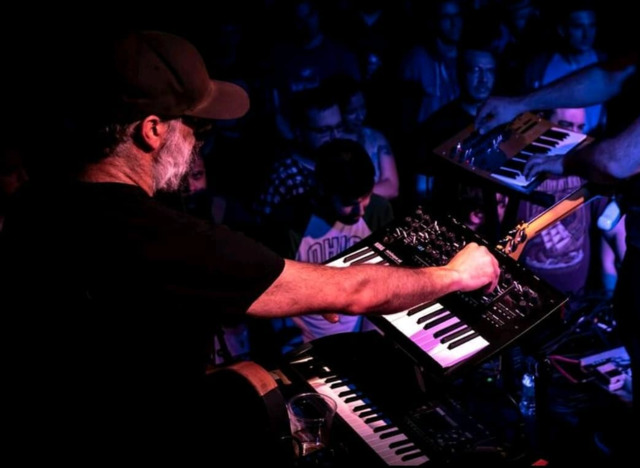 Twenty years ago, the Appleseed Cast relocated from California to Lawrence, Kansas. In the decades since, the band has released seven stunning full-length albums, exploring the world of post-rock with an ear toward beauty and soaring, epic songs. The Appleseed Cast has seen a number of line-up changes, label switches, and sonic divergences over the course of its existence, and it’s been six years since the band’s last album, 2013’s Illumination Ritual.

Given that lengthy hiatus, it seemed unlikely that a new album would be forthcoming anytime soon. But a new song was posted back in January, with the band — with a lineup now featuring Crisci on vocals and guitar, Sean Bergman on guitar, Ben Kimball on bass, and Nick Fredrickson on drums — promising a return to the studio for more. A scant six months later, the Appleseed Cast’s latest, The Fleeting Light of Impermanence, has arrived, due out this Friday on Graveface Records. I recently spoke with Chris Crisci while he was on a break from his day job doing sound engineering and video production for the Carlsen Center at Johnson County Community College.

The Pitch: The concept of putting together this album from a series of vignettes is fascinating to me. Could you explain that in more detail?

Chris Crisci: It’s been about five years, I think, that I’ve been slowly working on writing songs. It’s been about 70 songs, I’d say, that I’ve written that were just partial. How do I put this? [pauses, laughs] So, basically, after about four years, I started getting serious about wanting to put something out, and I had all these parts, and I just kind of started throwing away parts I didn’t like, keeping parts of songs I did like, and then rearranging them into complete songs.

It seems as though certain tracks have an instrumental emphasis: the drums on “Petition,” bass on “Last Words,” along with several cuts that are synth-heavy.

That’s interesting, because from the very beginning, I’ve gone through a lot of phases of what I wanted to do, just in general, and one of those phases was very much wanting to do an instrumental record. I would still love to do an instrumental record at some point, but another phase was where I wanted to do tons of synth. I actually wanted to not do any guitar and try to do a record with just drums, bass, synth, and vocals, and a lot of parts I wrote during that time, we did use.

But, I think the point where I made the most progress writing was where I had to admit to myself that we’re a guitar band [laughs]. It’s fun to try those ideas, and I’m not saying those ideas couldn’t be viable at some point, but at this point, I just had to be honest about the fact that if I wanted to get a record made — if I wanted to finish a record — I had to admit that we’re a guitar band at heart.

I love the way that The Fleeting Light of Impermanence kicks off with all the synth in “Chaotic Waves,” then comes back to it almost dead-smack in the middle with “Collision,” and then right there toward the end on “Reaching the Forest.” It really provides a sturdy, yet different, framework on which to hang those chiming guitars, which are The Appleseed Cast hallmark.

We’ve been using synths the last three records, at least, and on every record — maybe not the first one — we’ve had keys. Organ and piano. I’ve always loved playing those parts and, honestly, when I was in that phase of wanting to do that record with live drums, bass, and synth together, it was because I was tired of playing guitar. I was more enthusiastic about playing synths. Just the kind of power you can get from those instruments.

Then, I came back around and realized there was tons of power in guitars, as well. But at the time, that was my thinking and how I was feeling about those instruments.

The first song released from the album, “Time the Destroyer,” really plays with open space. It really breathes, in a way that led it to being the song I kept returning to over and over. Having listened to the Appleseed Cast over the years, it seems as though the new material isn’t as filigreed as your past work.

The drums let a lot happen. It’s such a half-time kind of a feel, whereas really busy drums can make a song sound kind of claustrophobic.

Even the guitars have a certain amount of space, as well, letting the sound naturally decay. I think the press release puts it as you wanting a natural room feel, and I think that’s the song on which it best comes through.

Yeah, absolutely. I don’t know exactly what the press release says, but most of the songs, with very few exceptions, there’s no reverb on them. [laughs] It’s all just the room, and we set up the drums, and used four room mics, in addition to close-mic’ing it. Then we positioned the amplifiers in the room in proximity to those four room mics and got all of our reverb from those room mics.

The reverbs are all really cohesive. What I mean is, since it’s all in the same room, it kind of brings out that live feel to it. It was a little experiment we wanted to try, and I think it worked out pretty well, and I’m really happy with how that sounded.

You recorded all of your vocals at home. Was that out of necessity or do you like that intimacy of being alone?

Yes, that’s it. I have done maybe three or four records, just doing the vocals at home, and it’s just so much easier. Let me put it this way: Sometimes, I don’t know if I like a part until I’ve heard it back. I’ll sing something in practices, and I’ll think I like it, and then we record it, and I hear it, and I think, “Oh my God, that’s the cheesiest thing. I have to change it.”

When I record at home, I can go though lines, and record different words, and it’s really easy to go back, and be like, “I like that,” or “I don’t like that,” and it makes the whole process faster. Plus, I’m very shy about my voice, so not having to sing in front of an audience and try ideas in front of people — I prefer that. It gets embarrassing, trying ideas, because it’s your voice. It’s not playing an instrument with your fingers.

Your voice can do a lot of really ugly things, especially when you’re trying something for the first time. It’s more like trying to do a backflip than to play a sequence of notes. If you’ve never done it before, it can end up really bad.

The Fleeting Light of Impermanence is out Friday, June 28, on Graveface Records. You can pre-order it in a variety of formats on Bandcamp.