The American Outlaws loyally follow the USMNT through it all 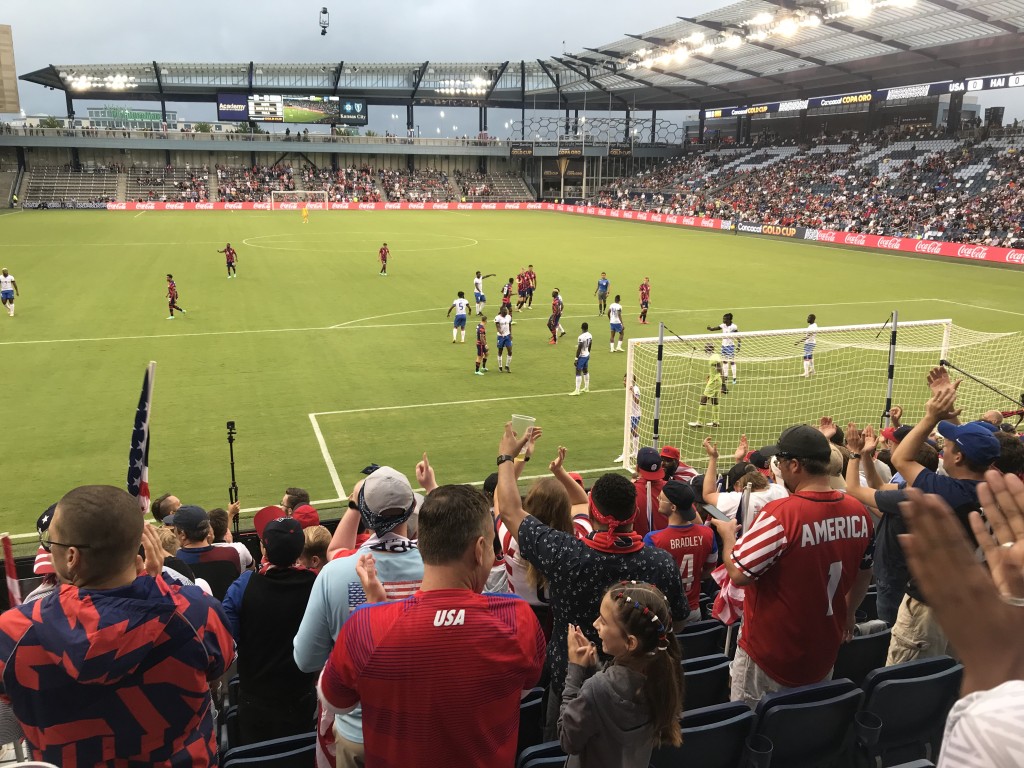 Team USA’s first foray into the 2021 Gold Cup has unique roots in common with the supporters group following them around: a home in the Midwest. The United States Men’s Soccer Team (USMNT) settled in to Kansas City this July to labor through a week of group stage matches in the Gold Cup. Bolstering them from behind goal was the American Outlaws, that dedicated contingent of soccer aficionados born out of a bar in Lincoln, Nebraska.

Drawing together a kaleidoscope of America—ages, regions, generations all show up here—the American Outlaws (AO) took to their Kansas City chapter house to watch a week’s worth of soccer backing the red, white, and blue. They also came to unite the roots of the past, to restart a long-paused continuum, and to greet the era coming next. The festivities were reunion, rejuvenation, and status review in equal part.

There’s a familiarity among the frequent faces that have been on the road together before. There’s AO San Diego, AO DC, AO Dallas, and the president of AO Kansas City. There are the fans distinct for the costumes they wear or the roles they play in the stands. There’s the crew that dresses up like continental soldiers. The guy that dresses up like George Washington and plays drums. The couple that dresses like Wonder Woman and Captain America. They count their attendance at national team matches in the language of national team call-ups. “How many caps is this for you? Oh honey welcome, this is my 49th!”

The USMNT took to the field July 11 opposite Haiti to launch a fresh battle that charts uphill. And the Outlaws took to Johnny’s Tavern on Grand Boulevard the evening prior to commence a battle of their own. They’re on a mission, together but separate, a parallel mission with tandem ends. 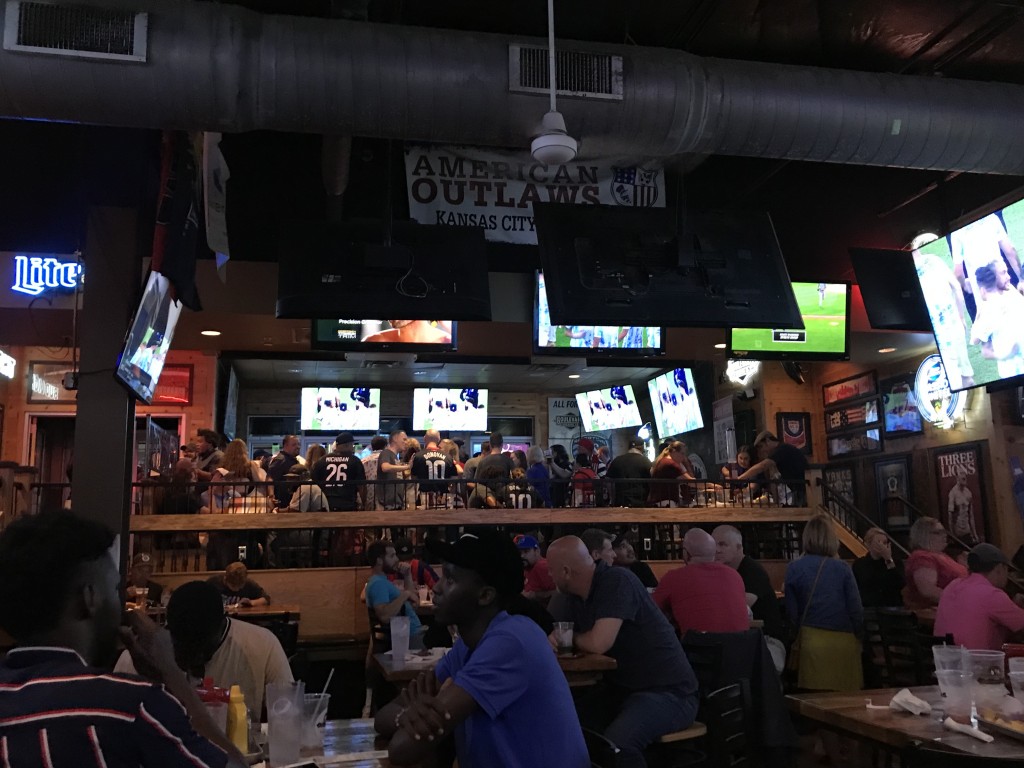 The American Outlaws cheering on the USMNT. // Courtesy Megan Swanick

Now, I’m not the first person to cry the desperate call for American soccer in the balance. Since the USMNT first re-introduced themselves to the World Cup in 1990 (Their last appearance, their third ever, was in 1950) seemingly every generation has been playing with the weight of American soccer hanging heavily upon their cleats.

But the ghosts of failures past and potentials future looms largest over this generation most of all. The hurdles they climb over and march forward from have World Cup failure, Olympic failure, and pandemic stagnation hanging around their necks.

For the players, it’s a paradox. Failing to qualify for the previous World Cup (The first since 1986) or the present Olympics, it’s hard to argue they’re not underperforming on the global stage. But it’s not because of skill. Never mind the external failures, the players at the U.S.’s disposal have never been more skilled, have never played in higher leagues. What’s wrong is something else.

That something else is a meandering malice. Its tentacles grasp eras in transition, tactics falling apart, harsh conditions in opposing countries, players unavailable or flying in from very far off, and not to be underestimated, a lingering inability to define and solidify an ethos or style that makes us whole.

For the fans, the climb is elsewhere, but contingent upon the players’ progress. In a country notoriously and historically reluctant to care, failure and then failure and then a pandemic slid the ‘casuals’ into nonexistence and heated vehemence from stubborn haters straight up. The men’s soccer team? Didn’t they fail to qualify for X? Don’t we always lose to Y? Isn’t that the sport where everyone falls and rolls around? We suck. Why watch?

But the U.S. is changing, and the potential for people to fall in love with our men’s soccer team is higher than ever before. All we need is for the men on the field, and the fans in the stands, to capitalize.

And it is here, straddling eras of disappointment with high potential, riding the high of the recent trophy at the Nations League, that we have the Gold Cup. 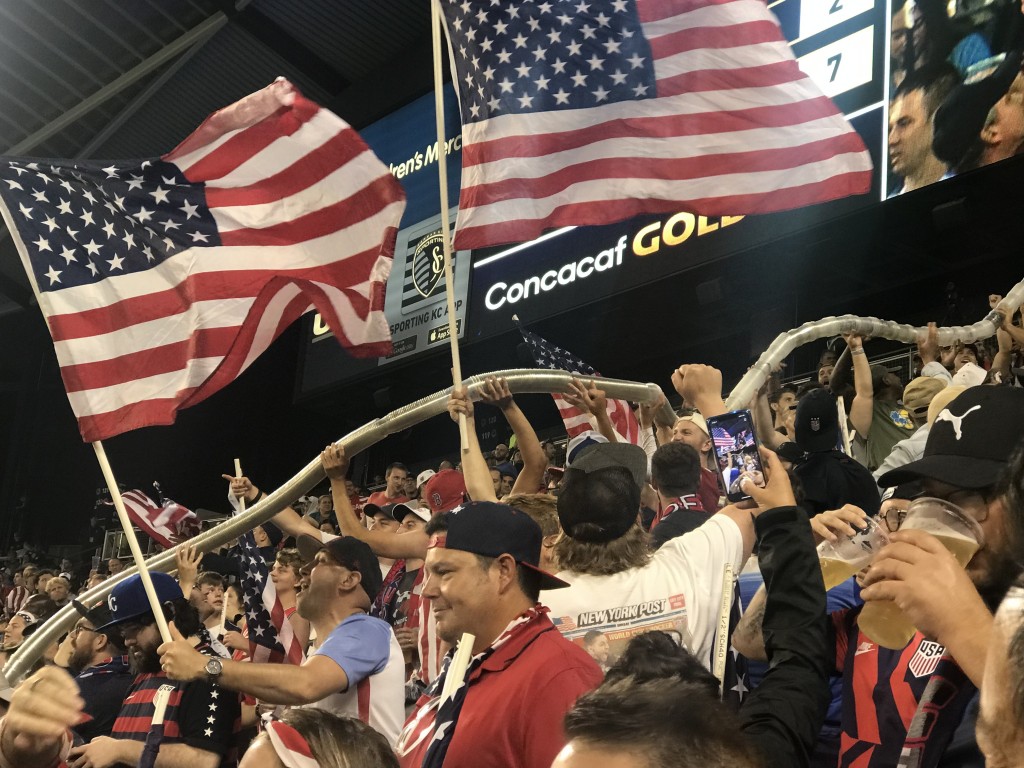 The Gold Cup is the biennial arena in which we pit the Americas North and Central alongside the Caribbean to test regional soccer prowess and crown one king. Now, coronation in CONCACAF is a messy, fickle thing. Never mind success statistics—Mexico smug at the top—the CONCACAF arena is slugfest soiree. Every match is a struggle, every survived struggle a success.

The beautiful game or the beleaguered one, a win is a win and a string is a trophy. And the USMNT is on the CONCACAF hunt for their second this year.

After a drought of packed stadiums through the pandemic, the U.S. caught steam (and a Nation’s League Trophy) defeating Mexico 3-2 in overtime before a sellout Denver crowd June 9. That victory over Mexico, and the drama of it, caught international headlines, not to mention the interest of America’s potential and growing fans. Since that moment, the excitement, attention, and success seem swelling back up. The USMNT and the American Outlaws plan to ride that wave. Ride it into this Gold Cup, into seven months of World Cup Qualification matches embarking from September, then to the world’s biggest stage for World Cup 2022.

The American Outlaws aren’t the only supporter group tracking faithfully behind the USMNT, and they aren’t the oldest, either. But they are currently the largest. They’re certainly the most influential. And like corn, grain, and soybeans, they hail proud roots from the Midwest.

The story goes that three soccer superfans sequestered by the national disinterest of early 2000s middle-America took to the moniker Outlaw, wearing bandanas old west style to signify their outcast state. It hasn’t always been easy to be a soccer fan in America. Not accepted by the people that call it football, not accepted by countrymen who call football something else.

They took their passion on the road and to the bar, to the stadiums from sea to sea. And they saw that in American soccer fandom, a certain something was lacking. Coordination and definition, and a few home bases, were in dire need. Traveling to attend the 2007 Gold Cup, they officially launched the American Outlaws as a non-profit organization to meet that need.

What they provide, in severely simplified terms, is four-fold: in-stadium energy and cheering, leading the stands in chants; in the days surrounding they host official parties and tailgates; across the USA and beyond it they run local chapters with elected leaders; and last but not least, they run philanthropy. Their philanthropy mission, AO Impact, aims to change the nature of soccer in America to be more inclusive and accessible. From donating soccer balls to cleats to nets for communities to play, “We will keep going until soccer in America, looks like America.” 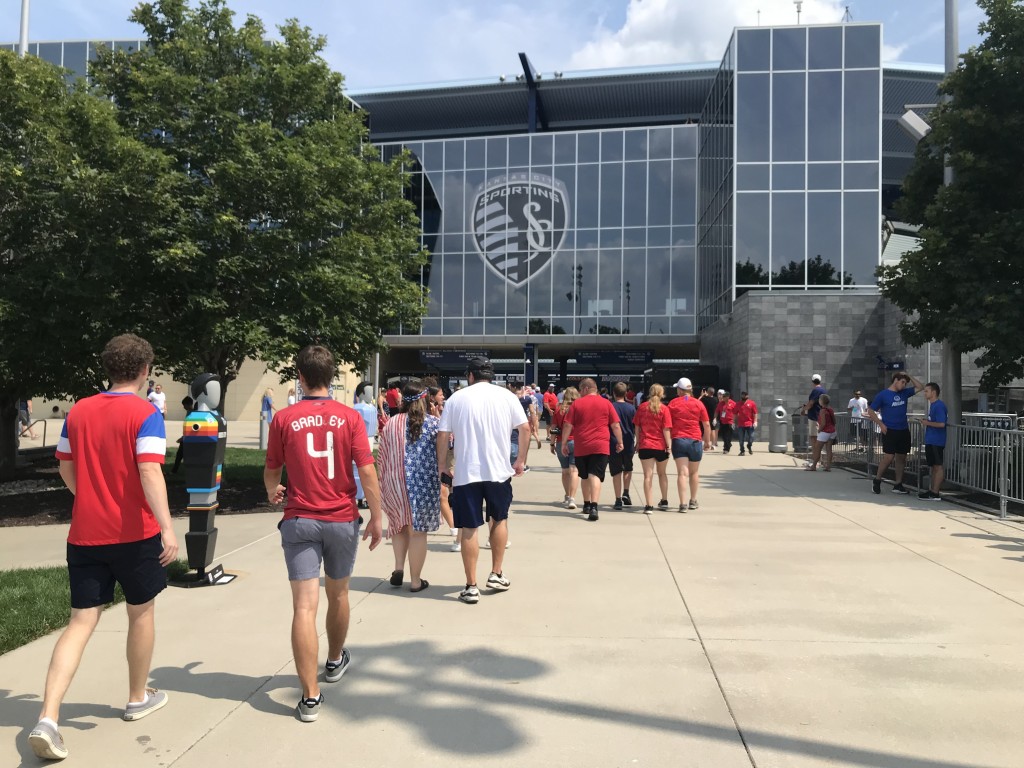 They travel around the world, to World Cups in South Africa and Brazil, to Gold Cups and World Cup Qualification and friendlies across the Americas and Caribbean. They meet in the wee hours and late hours on weekends and weekdays at local chapter houses to watch games. And they do what they set out to; they provide a structure and a convening space for fans to come together and grow. 14 years, 2 World Cups, and 8 Gold Cups later, the Outlaws are 30,000 members and 200 chapters strong. And throughout a week’s small space in a Kansas City July, the American Outlaws formally gathered six times.

Three “night before” parties and three tailgates leading into three game days, the Outlaws cheered on the USMNT as they came out first place in their group. Just past Haiti, convincingly against Martinique, then victorious over Canada in a game we might have lost. With much left to go, the team departed Kansas City for Texas to combat what’s next. The Outlaws will follow them south. If successful in the Lone Star, the team will end their bout in Las Vegas. The Outlaws will be there too.

One of the most exciting generations of U.S. Men’s Soccer is upon us. The potential is high and it’s growing. This summer is one of building momentum, a momentum that charts into a looming World Cup, that’s hopeful to include another trophy in Las Vegas by the time it’s done. Regardless of the outcome, one thing is certain: the American Outlaws will cheer them from the stands.