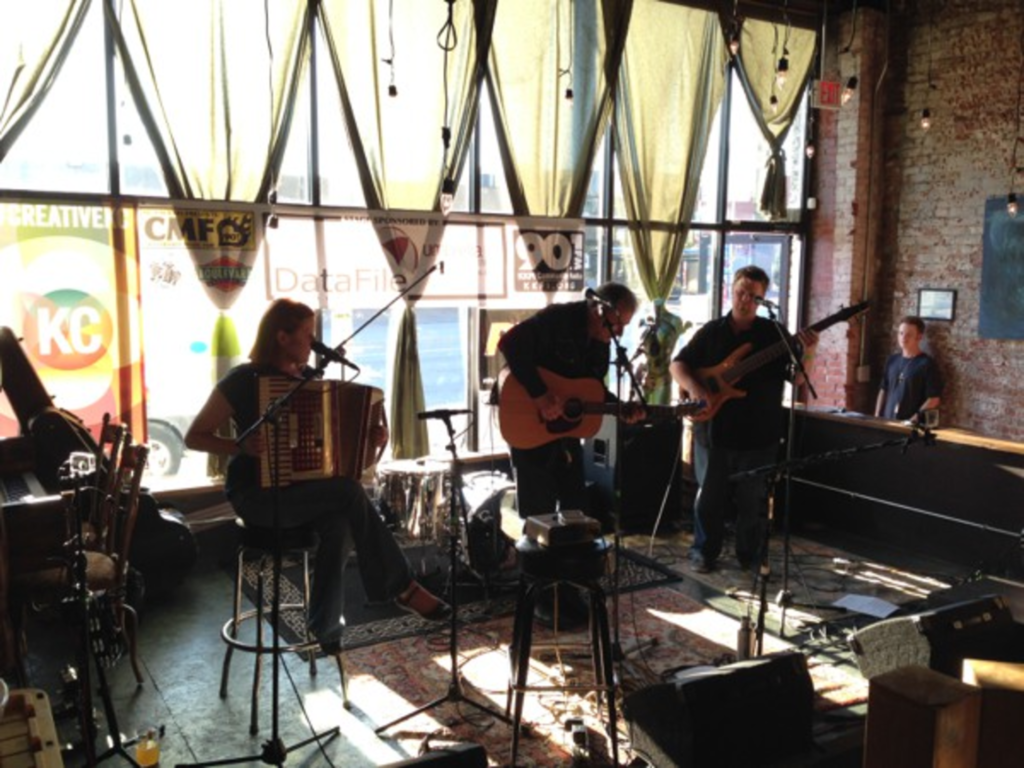 Kansas City music lovers could not have asked for a more perfect Saturday – prime pickings for a music festival. With blue skies, a cool breeze, mild temperature and light jacket, yesterday’s 10th Annual Crossroads Music Festival was off to a suberb start.

Spread out over multiple venues in the Crossroads District and all within comfortable walking distance of the main stage at Crossroads KC, there was plenty to pick from in terms of entertainment. In all, yesterday’s lineup consisted of over 30 local acts, with an eclectic mix ranging from country, hip-hop, electronica and bluegrass.

With sunlight filtering through the Tank Room’s westward windows and lighting up the stage, Scott Hrabko & the Rabbits handily delivered a set of rustic, old-timey country tunes to the warm festival audience. Hrabko finger-picked his acoustic guitar and sang cowboy ballads of travel, love, horses and the end of the world, while his fellow bandmates on bass and accordion provided spot on vocal harmonies. As the first act in a night of many, Hrabko and his Rabbits’ feel-good tunes seemed the ideal way to kick things off. 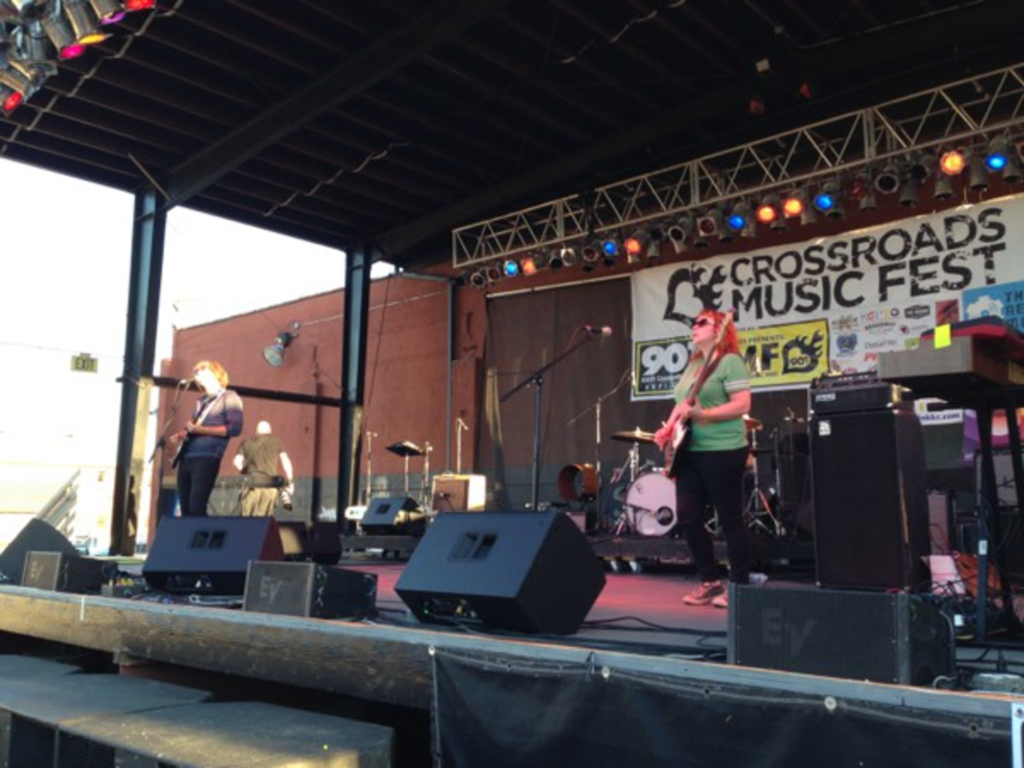 It was a short walk from the Tank Room to the main stage, where Loose Park’s high energy guitar rock was blasting throughout the neighborhood. The sound system was crisp, rich and loud all night, and even in the early hours, Loose Park used it to full advantage. The band’s variety of fuzzy rock and roll is kind of hard to pinpoint – a bit like an updated version of 1990s alt rock, somewhere between Pavement and Nirvana. Around the middle of the set, with a modest but appreciative audience dancing and pulling down beers, the sun hit the horizon and lead singer Matthew Dunehoo announced it as the first official sweatshirt day of the year. 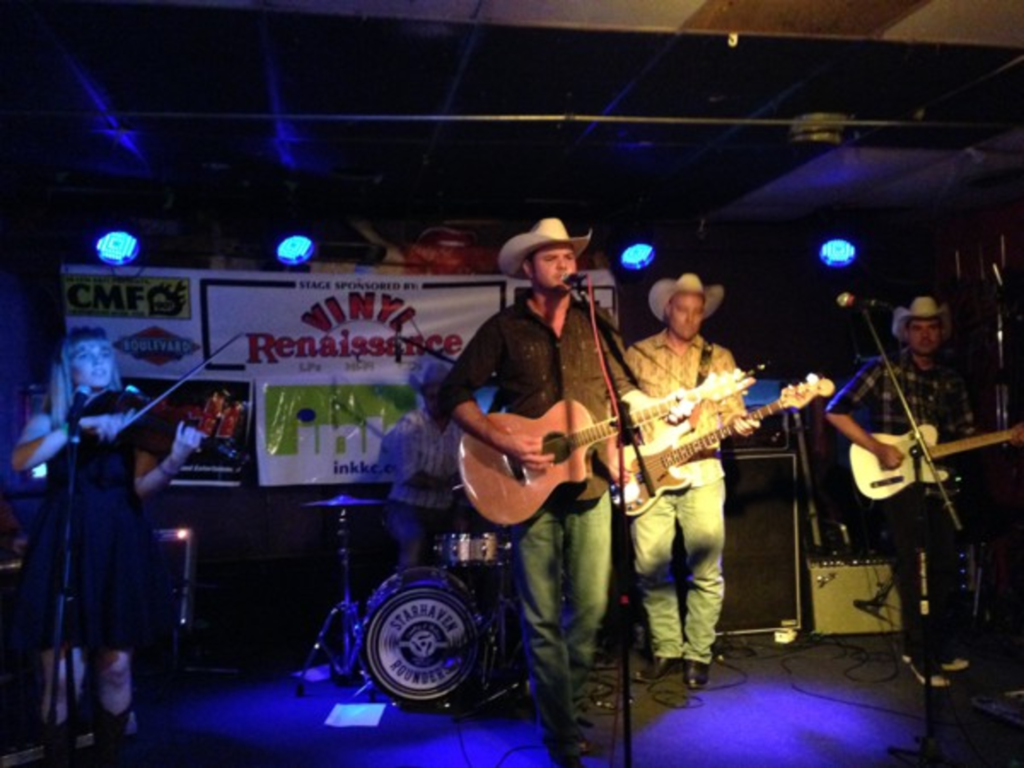 He was right, and after zipping up a hoodie, it was off to the Brick for another serving of rustic tunes. Starhaven Rounders is about as country music as it gets, and as it should be – none of that commodified bubblegum that seems to dominate popular country radio. It was the stuff of was honky-tonking, beer-drinking, dirt-kicking dreams. With a heavy dose of fiddle, steel guitar, cowboy hats and telecaster licks, the band packed the venue and got the audience guzzling beers and dancing right along. 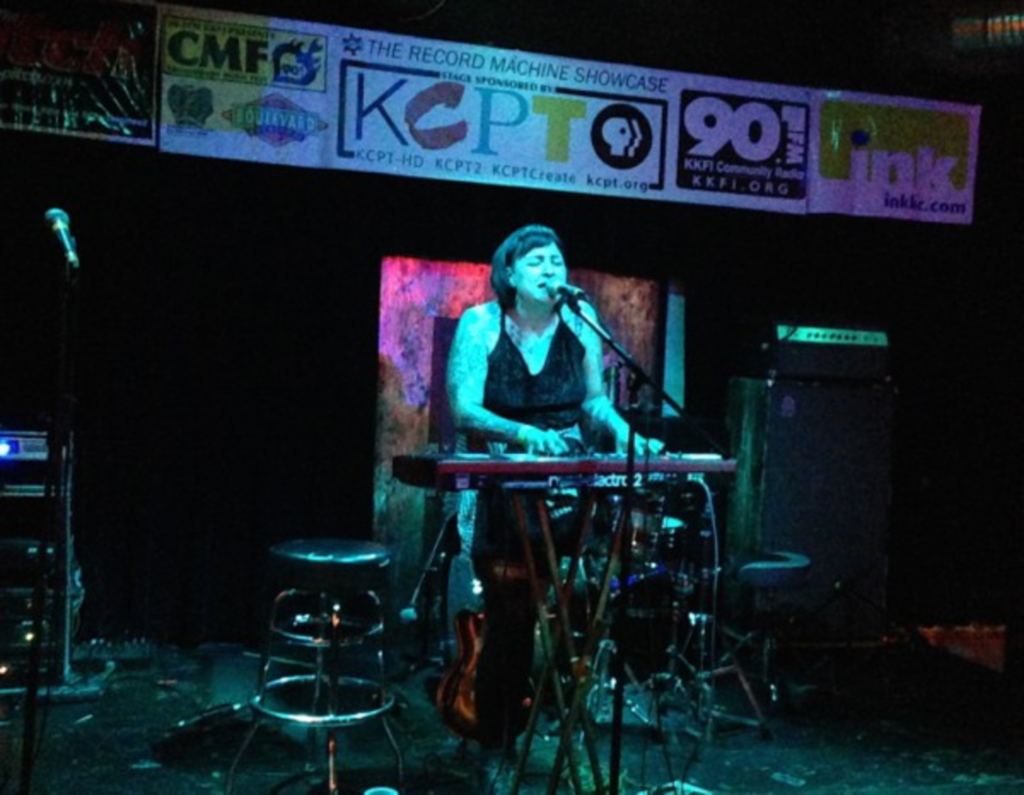 I migrated on to the Czar Bar, where singer-songwriter Katlyn Conroy offered quite the change of pace from the raucous country of the Starhaven Rounders. Performing as La Guerre, Conroy delivered a delicate, introspective set. After a couple of gorgeous, heartfelt numbers, I registered Conroy’s fragile, pretty voice. Standing on the stage solo behind her keyboard, she moved graciously through her original material, along with a lovely cover of The Weeknd’s “Wicked Games.” There were some problems mid-set, as she awkwardly fumbled through a new song on her admittedly out-of-tune electric guitar. “I should just tell you right now, I’m drunk,” she announced somewhat apologetically. It was a pretty cute moment. 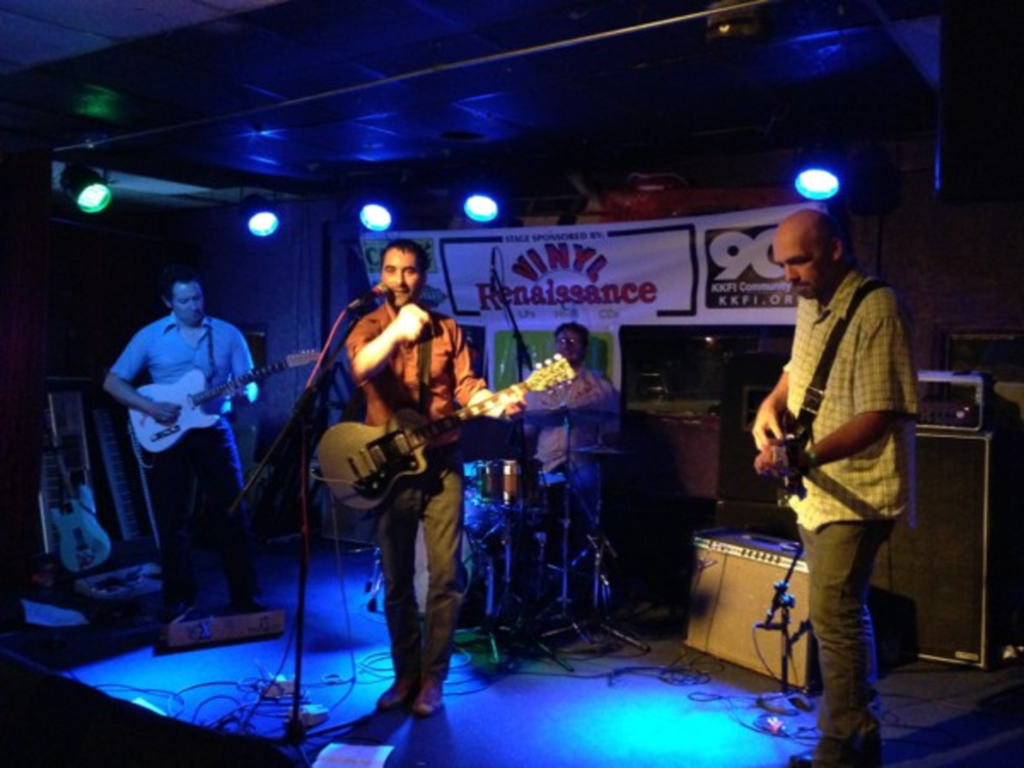 Back over to the Brick, a far rowdier – and likely drunker – crowd packed in around the bar and the front of the stage. Dead Voices started in on a set of rambuctious rock and roll and blistering 12-bar blues. With a heavy helping of Americana and roots, filtered through unpretentious classic rock, you really couldn’t ask for a better bar band. 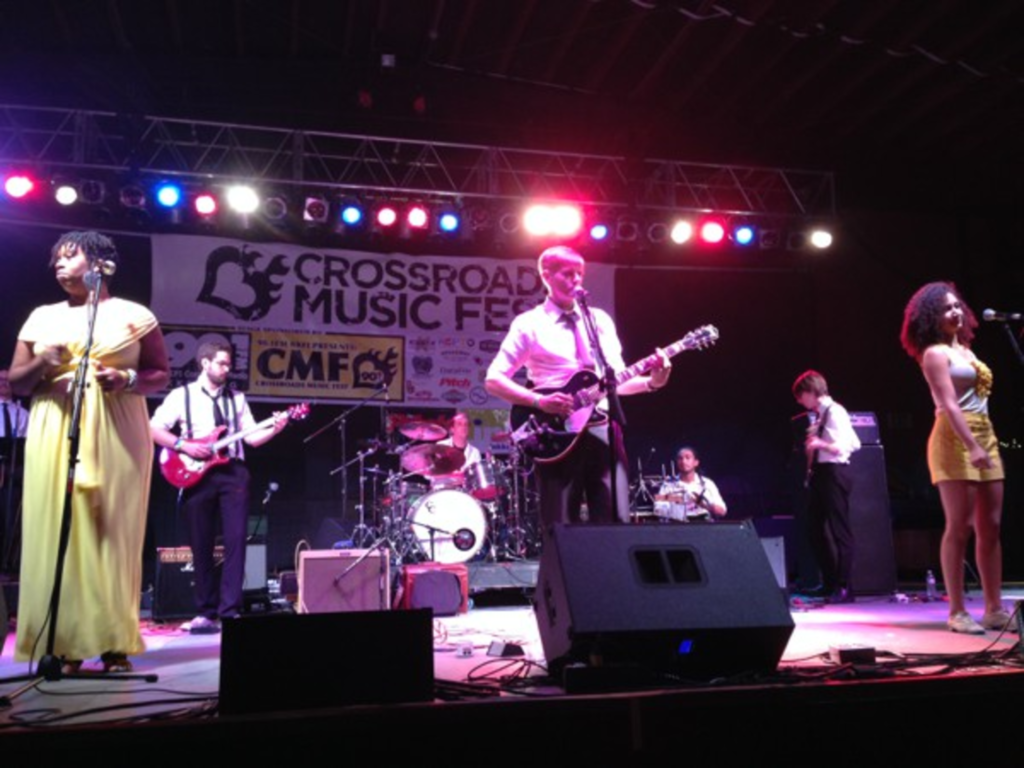 My Brothers & Sisters is fast becoming one of the more recognized acts around town, and it’s easy to see why. For starters, the band is huge – 14 members in total. Complete with a horn section, string section, duel drummers and not one, not two, but four female backup vocalists. It’s clear that the band is very well-rehearsed – an exceptional feat for such an act, packed as it is with performers. The true star of this ensemble, though, came in the form of charismatic lead singe and band conductor Jamie Searle, whose presence shined on the main stage. He led My Brothers & Sisters in a big, swooping Motown-influenced rock set, which seemed like it would fit right in as a party band at a Vegas casino. The set was heavy on crowd-pleasing covers, including a funky version of Peter Gabriel’s “Sledgehammer,” and a grandiose, soulful take on Diana Ross’ “Someday We’ll Be Together.” 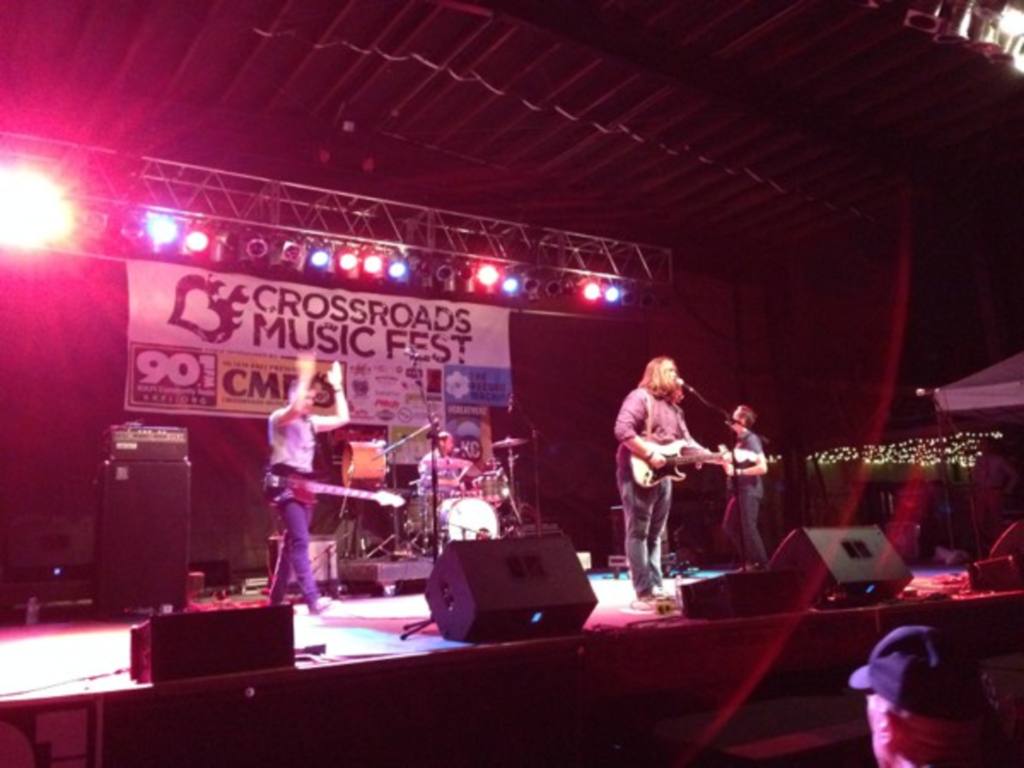 Just before 11 p.m., headliners Me Like Bees took the main stage to a delighted audience that spanned from the soundboard to the front of the band. The four-piece group rifled through one tight, funky rock tune after another, with a sound and swagger reminiscent of Arctic Monkeys or Modest Mouse. The lead singer belted out tunes with exceptional ferocity in his bluesy, beer-soaked voice. But it was hard to keep your eyes off the guitarist and bassist at the sides of the stage, who, aside from churning out the licks, worked over the audience with some killer dance moves. The highlight of the night was a fantastically executed mashup of M.IA.’s “Paper Planes” and Modest Mouse’s “Missed the Boat.” By the time Me Like Bees finished their headlining set, it was time to move indoors and warm up a bit.

The CMF lineup was packed with some of the best in local talent, one of those late-summer things you can always count on for a fun, easy time of bar-hopping and good music. And judging from this year’s 10th annual event, the Crossroads Music Fest should easily carry on for another decade.