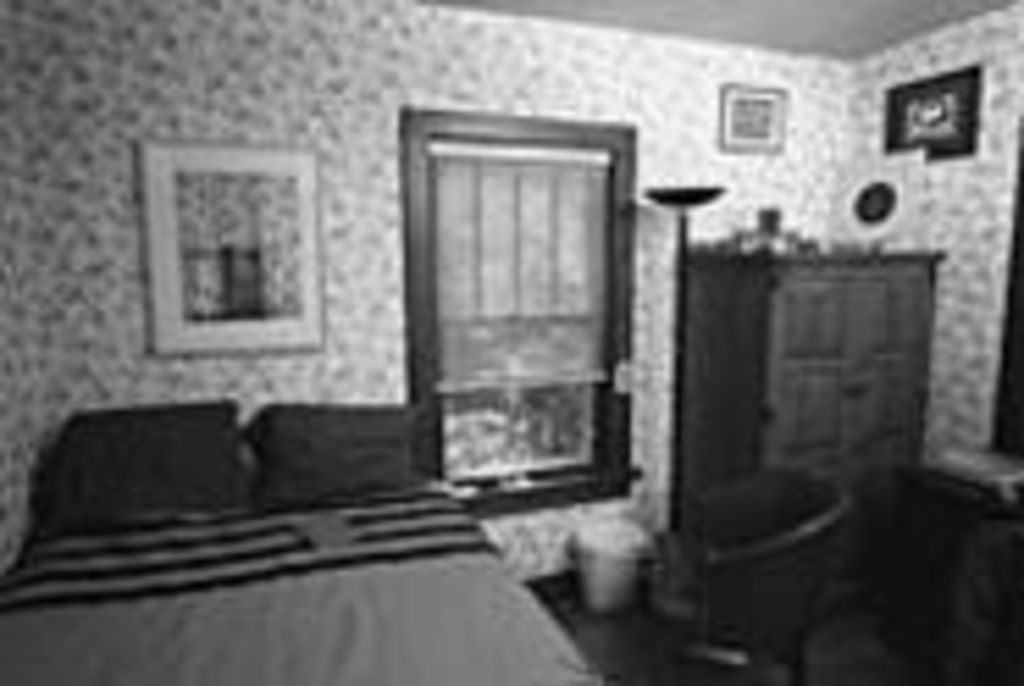 Anyone who ever called on Burroughs — one of the twentieth century’s most notorious literary figures — saw that quote. It was inscribed on a small stone plaque in the living room of the red bungalow in a leafy East Lawrence neighborhood where Burroughs lived for the last fifteen years of his life.

The plaque was surrounded by mementos of the writer’s fabled travels: swordsticks, puzzle boxes, skeleton dolls, knee drums, scorpions suspended in glass, assorted switchblades, a shrunken head. Blowguns and animal skulls aside, the bungalow, which Burroughs believed to be a kit house from the Montgomery Ward catalog, reflected a domesticity that belied its owner’s reputation.

Burroughs wrote Naked Lunch, a seminal — and scatological — text of the Beat Movement. He arrived in Lawrence at age 68, a controversial figure whose frank writing about drug use (particularly his own heroin addiction) and sex (of almost every imaginable variety) had made him an éminence grise of the counterculture. Famously lauded by Norman Mailer as “the only living American novelist conceivably possessed by genius,” Burroughs was damned by many for the death of his wife, Joan Vollmer, whom he shot during a William Tell stunt in a Mexico City apartment in 1951. (The shooting was later ruled to be accidental.) Burroughs seemed an unlikely Lawrencian.

His attachment to the city also mystified many of his hipster contemporaries, especially those from New York, where he lived for many years in a Lower East Side apartment called the Bunker and hosted the likes of Patti Smith, Lou Reed and Easy Rider writer Terry Southern. The New Yorkers’ attitude was summarized by the composer and pianist Philip Glass as he looked over the Saturday-night sprawl of scrubbed, corn-fed young people on Massachusetts Street following a performance with the Kronos Quartet at the Lied Center not long after Burroughs’ death. “I will never understand what brought William here,” he told a reporter. “It always mystified me.”

But Burroughs turned out to be a model citizen in Lawrence — a polite old man who wrote letters to the editor about the importance of leash laws. He lived quietly, making art and writing The Cat Inside Me, a love letter to his cats disguised as a book; and My Education, an account of his late-life dreams and the ruminations they sparked. By 1996, when the Los Angeles County Museum of Art mounted a show of Burroughs’ paintings, his stature in the community was such that The Lawrence Journal-World sent a reporter to California for the opening and ran a front-page story every day for a week.

James Grauerholz, Burroughs’ long-time manager and trustee of the writer’s estate, knows what brought him to the house on Learnard Avenue. “He poeticized it as ‘Learn Hard Avenue,’ the place where he would make his life-review and face all the postponed lessons of his long life, and face as well the unknowable mystery of his death, which he knew he would meet here,” Grauerholz wrote in a recent e-mail to a group of the writer’s local friends and associates. Grauerholz is preparing an application to add the bungalow to the National Register of Historic Places.

“Learnard Avenue was his home address longer than any other in his long, widely traveled existence,” Grauerholz tells the Pitch. He notes that the Beat Hotel in Paris, where Burroughs finished Naked Lunch, and the writer’s former London flat have already been graced with historical markers. The Bunker was designated a New York City landmark in 1998.

Visitors to the Lawrence house — there were many, ranging from Hunter S. Thompson to Kurt Cobain to scruffy punk bands from the sticks — were often surprised by the simplicity of Burroughs’ daily life. (The man considered by many to be the father of the Cybernetic Age did not have a computer in his house.) Burroughs favored bare-wood floors and functional furniture. The only obsession on obvious display was his passion for art. On the walls hung a changing collection of paintings by artists such as Robert LeCoco and Brion Gysin. Occasionally he hung his own work; Burroughs created some of his best-known visual art during his years in Lawrence. He spent much of his time in his bedroom, where the art was in the form of recently perforated pistol targets, and where he wrote at a desk beside a window overlooking a tree-lined creek and the graves of his beloved cats, eight of which were interred next to the creek under individual stones. A pond in the big backyard was home to fat, gold koi, which Burroughs fed by hand every day at cocktail hour.

The house was emptied after Burroughs’ 1997 death, the books and paintings and scorpions carefully inventoried and stored. They may one day be returned to the house, however. A group of people met for the first time last month to explore the possibility of restoring the house to its original condition as part of a proposed visitor’s center devoted to the writer and his work. Among the attendees was Julie Mulvihill of the Kansas Humanities Council.

“I didn’t know William, and that’s one of the reasons I think this is a good idea,” Mulvihill says. “My involvement in this is from personal interest and not because of my work with the Humanities Council. It’s a chance to share William’s work and William’s story with everyone who never had a chance to get to know him. It’s important in Lawrence, but it’s also important to the larger literary community and music community around the world…. We’re in the very early stages of developing some sort of foundation that will let us get money channeled to where it needs to be.”

The Lawrence City Commission recently announced its support for a year-old proposal by the Brook Creek Neighborhood Association to rename the creek beside the house Burroughs Creek. What official maps now call the AT&SF Tributary runs alongside an abandoned railroad right-of-way which the association hopes to convert to a biking-and-hiking path to be called Burroughs Trail.

The neighborhood association first proposed renaming the creek in February 2002, but federal rules prevent such a commemorative renaming until five years after the person’s death. That requirement now fulfilled, the effort is under way — just as the creek becomes a major focus of the city’s attention for reasons utterly unrelated to the author of Junky.

The creek is a major terminus of the city’s stormwater drainage system. City engineers are in the middle of a $2 million drainage-improvement project that originally proposed to fell all the trees, widen the creek and build a wide grass swale over part of the cat cemetery.

“I completely understand the need to improve stormwater drainage,” Grauerholz says. “The house’s basement flooded twice while William lived there.” He was nonetheless concerned about the project’s possible impact on the property. But its engineers, he says, have indicated they will sequester the cat graves and save many of the trees that so delighted the writer.

The city’s cordiality suggests that Lawrence is making peace with its intimate association with the man who was for years its most famous resident. “He’s dead now,” Grauerholz says. “They know he won’t do anything bad.”