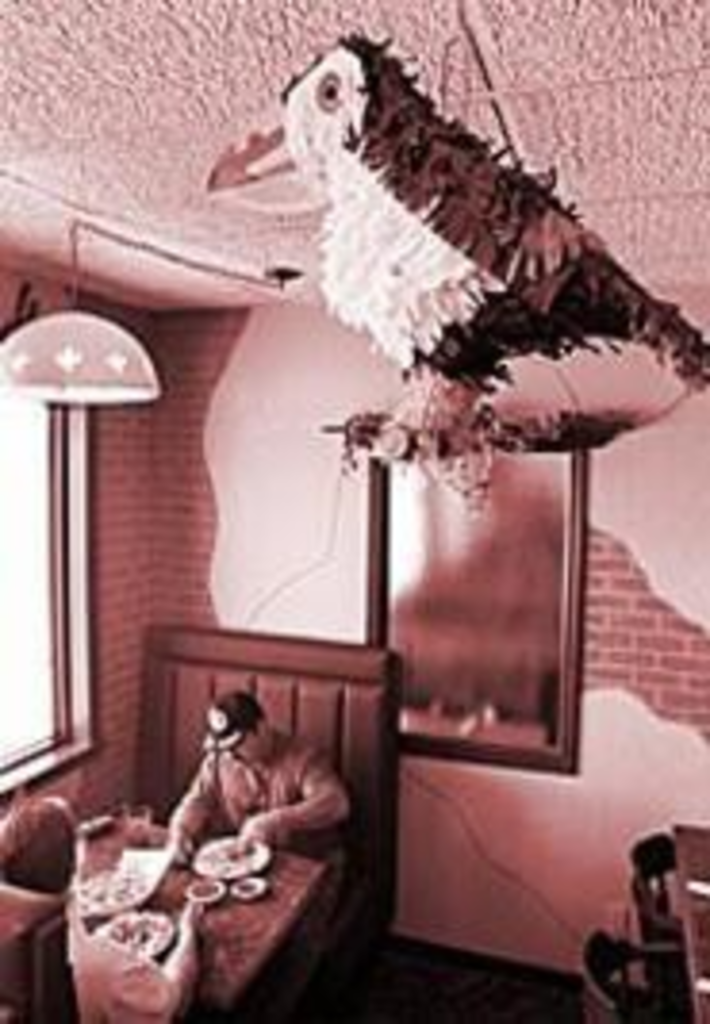 American cooks love to tinker with tradition — but mixing up cultures in ethnic cooking is dangerous. I consider “pizza rolls” (pizza toppings baked inside wonton wrappers) to be as insulting as that cockeyed invention called an “Oriental salad” (salad greens with water chestnuts, canned mandarin oranges, and fried rice noodles) or, worse yet, the recipe dreamed up in the 1960s by the makers of 7-Up: For a new spin on “French” cuisine, they recommended peas Provençal served in a hot but delicate sauce flavored with, yes, a splash of fizzy 7-Up.

The 1999 Recipe Hall of Fame Cookbook includes recipes for a Lasagna Pie (made with packaged biscuit mix) and Mexican Lasagna (made with cooked beef, refried beans, lasagna noodles, and salsa). But neither of those inventions can hold a sparkler to the cheesy slab of cross-cultural creativity served by Alvarado’s Casa de Tacos in Kansas City, Kansas. When our server brought out the restaurant’s Taco Lasagna, steaming and quivering next to a pool of bubbling refried beans and a glob of pale orange Mexican rice, my friend Bob announced: “My mother used to make that recipe. She found it in a magazine, but it was called Mexican Mess.”

Mexican Mess? The concoction — ground beef and chili sauce layered between corn tortillas, sitting on a foundation of a corn tamale, and blanketed with a layer of molten orange cheese — wasn’t messy, and it wasn’t quite authentically Mexican or truly Italian. It was an all-American innovation. This unpretentious restaurant’s name suggests that it’s a cozy little taco joint, but in addition to providing all the dishes you’d expect to find in a Mexican-style restaurant (tacos, chimichangas, burritos), Casa de Tacos decently prepares a few Italian dishes. There’s Nana’s Lasagna, which is a traditional version made with meat sauce, and a breaded chicken Parmesan served with spaghetti. And on Sundays, the place serves breakfast, including a heaping plate of biscuits and sausage gravy.

“Yeah, one of the owners is Italian,” the waitress told us on one visit. “But don’t ask me which one.”

The restaurant’s owners are Bob and Jill Alvarado and, making an educated guess, I figured Jill was the one with the Italian family history. I was correct: The former Jill Biondi uses her family’s recipes for the cheesy Italian lasagna and the hearty manicotti. Bob Alvarado, who grew up working in his father’s restaurant — the original Casa de Tacos at 18th and Central, which has been there for 36 years now — has expanded the menu at his seven-month-old establishment to include his own innovations.

Located in a building that decades ago was a chain steakhouse, the new Casa de Tacos is gleaming and family friendly. Aside from the foam-rubber cactus at the front door and the handful of paper piñatas hanging listlessly from the ceiling, there’s not much in the way of décor. The flatware is wrapped in paper napkins, and the youthful servers wear matching T-shirts (tie-dyed Chiefs shirts on one occasion) over their jeans.

As you might expect in a no-frills Mexican restaurant, the service ranges from friendly and attentive to sullen teen zombie, depending on where the control-freak hostess chooses to seat you (“I’m sorry,” she snapped at me, “you cannot have a booth”). On my first visit, our server was a hulking kid who moved as slowly and deliberately as if he were underwater. His knowledge of the menu was practically nonexistent, as was his serving style: His introduction to the table was, “Ya know what you want yet?”

I’m happy to report that this was the exception to the rule. On subsequent visits the service was snappy, informative, and attentive. But not perfect. Not once did anyone suggest that there was an alternative to the little bowls of watery, ketchupy sauces offered as dips for the basket of house-made tortilla chips.

“This is the mild sauce,” each server said like a mantra, setting down a little blue china bowl. “And the hot sauce is in the yellow dish.” But neither sauce, made from a tomato-juice base, was very hot, spicy, or remotely interesting. I must have the minority opinion, however. “We’ve tried to change the sauces to something chunkier and spicier, but our customers throw a fit,” Bob Alvarado told me later. “They love those sauces.” There is, apparently, a third kind of dipping sauce, the more fiery, habanero-based Bob’s Sauce, but our servers never offered it to us.

Luckily, just looking at the menu turns up snazzier choices, such as a fresh-tasting guacamole (I suggest ordering the large version, since the “small” is microscopic) or a good-size bowl of melted cheese, refried beans, and chili, called the Nacho Grande Dip. I was hooked on the high-octane appetizer.

Other appetizers were disappointing, including the festively titled but dull-tasting Spicy Tortilla Jumpin’ Jacks, triangles of pepper cheese wrapped in a tortilla, rolled in something crunchy (perhaps crushed corn flakes?) and deep-fried. They had an artificial, prepackaged flavor that we couldn’t shake even by dipping them in a ramekin of the restaurant’s own Mexican chili. Bob thought the cheese wedge “had the aroma of smelly feet” and tossed it aside after one bite. Only slightly better was that Chinese-Mexican innovation, the Santa Fe Chicken Egg Roll, which had melted cheese, corn, chicken, and a dash of cilantro wrapped in a fried tortilla.

As I was nibbling on my giant portion of Taco Lasagna, Bob was fuming that his heaping plate of steak and chicken fajitas hadn’t arrived on a sizzling platter “like they do everywhere else.” Sautéed with onions and green peppers in a bland tomato sauce, the chicken was tender enough, but the beef was on the chewy side. And the dinner entrées were served with either a basic house salad (iceberg lettuce, shredded cheese, and fried croutons) or a cup of noodle soup in a watery, tasteless tomato broth flecked with bits of cilantro.

Things were much tastier on a second visit. I was satisfied with my Taco Fest, a plate of four crunchy, seasoned ground beef tacos served with refried beans and that gloppy Mexican rice. Bob had the day’s vegetarian special (a cheese enchilada and a tostada piled with guacamole and lettuce), and the uncomplicated dish was far superior to the more expensive fajita.

On this same visit, the perky server brought over a big metal dessert tray loaded with slices of cheesecake, a fat fried sopapilla, a slab of iced chocolate cake, and something called a Chango, which was a tube of cheesecake rolled in a tortilla, deep-fried, and slathered with cinnamon and sugar. This dessert, under an assortment of different names, is getting a lot of play at area restaurants (even Applebee’s has a version) and looks a lot more interesting than it tastes: It’s teeth-gratingly sweet and slightly chewy. The chocolate marble or banana-caramel versions probably would have been better choices.

The Chango was another hybrid of culinary cultures (in this case, part Mexican-American and part Jewish delicatessen). Except for such weird hybrids, Alvarado’s Casa de Tacos would be just like any other Mexican restaurant. Instead, it’s a United Nations of possibilities.