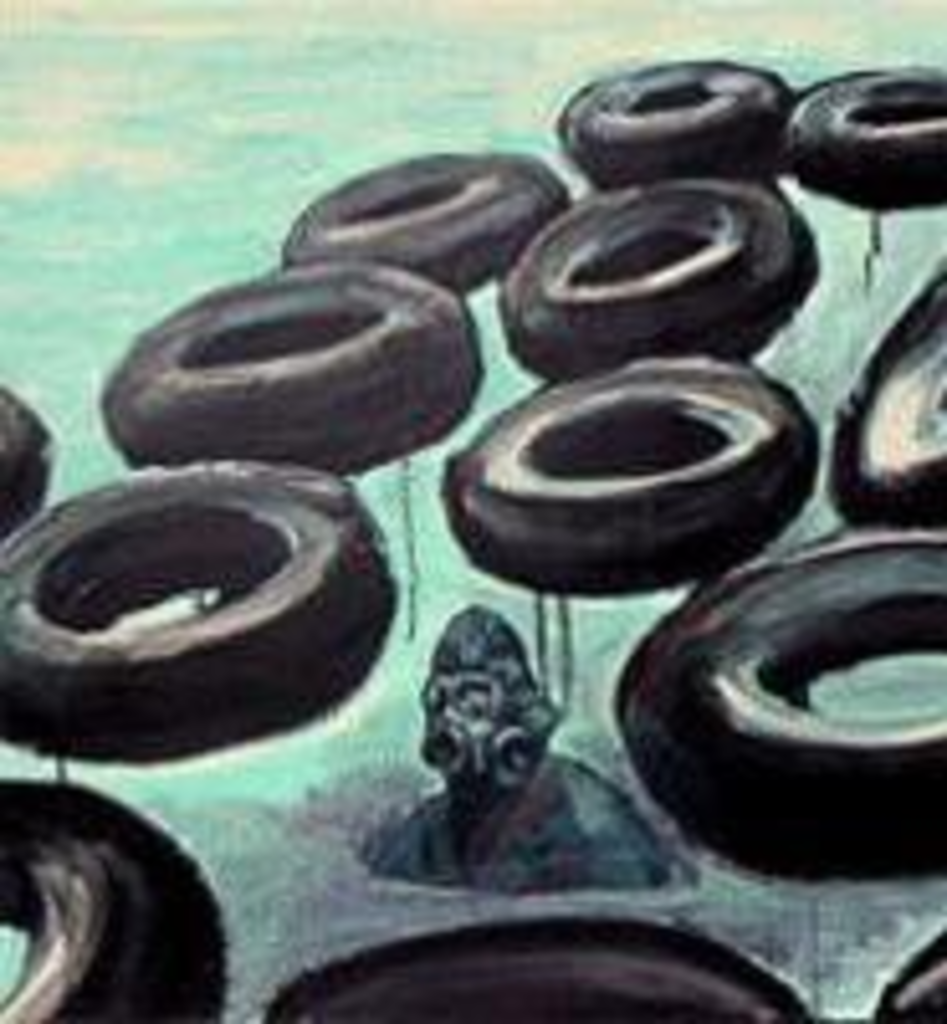 After the terrorist bombings in London in July 2005, Eric Kaiser began painting. It was summertime, when people are supposed to be on holiday, enjoying themselves, and Kaiser paired people on vacation with the stark images after the bombings.

A year later, Kaiser created a series of paintings titled We Know but Don’t Want to Believe What We Know, now at Pi Gallery. Kaiser used the paintings to convey the difficulty of grappling with the absurdity of terrorist attacks. In “Rubber Pool: Summer Bath in London,” a figure wearing a gas mask floats on a light-blue canvas with tires surrounding him. Kaiser explains that tires, detached from their automobiles, are stark images to him. In “Oxygen Men: London Crowd Summer ’05,” we see a group of tourists with gas masks on instead of sunglasses.

Kaiser’s paintings are unsettling; not because they are laden with stark images, but because they are like the convenience store you pass by every morning on your way to work. The images have become deeply embedded in our psyches. We pass them by, filter them out; taken out of context, we see them anew — and the result is chilling. In “Her,” a Rwandan woman surrounded by Kurds recalls the murder of thousands. “Him” is a painting of a Kurdish man, with a deep scar on his face, surrounded by figures in gas masks. Traces of another painting are visible beneath the surface, and if you look closely, you can see more masked figures.

Kaiser, a French native currently living in Switzerland, is a self-described nervous person who is much like the figures he paints. He appears unsettled and seems to enjoy creating dichotomies with subject matter and by literally dividing his work, as in his previous showing at Pi, titled The Prisoner of Light.

Some pieces from the previous show remain upstairs from the main gallery. The images include nude males and were inspired by photographs taken of abused prisoners at Abu Ghraib. The contorted figures appear trapped in their square frames; their faces are hidden. Within the frame, the paintings are divided into two parts, the nude man on one side and a color on the other (red, blue, green). The color is static, and the figure beside it is either writhing in pain or undulating with pleasure —we’re not sure which.

By recontextualizing what the news media have given us, Kaiser has temporarily brought us out of our trance, and we see things that we do not want to see, which reminds us that we know a lot more than we want to believe.