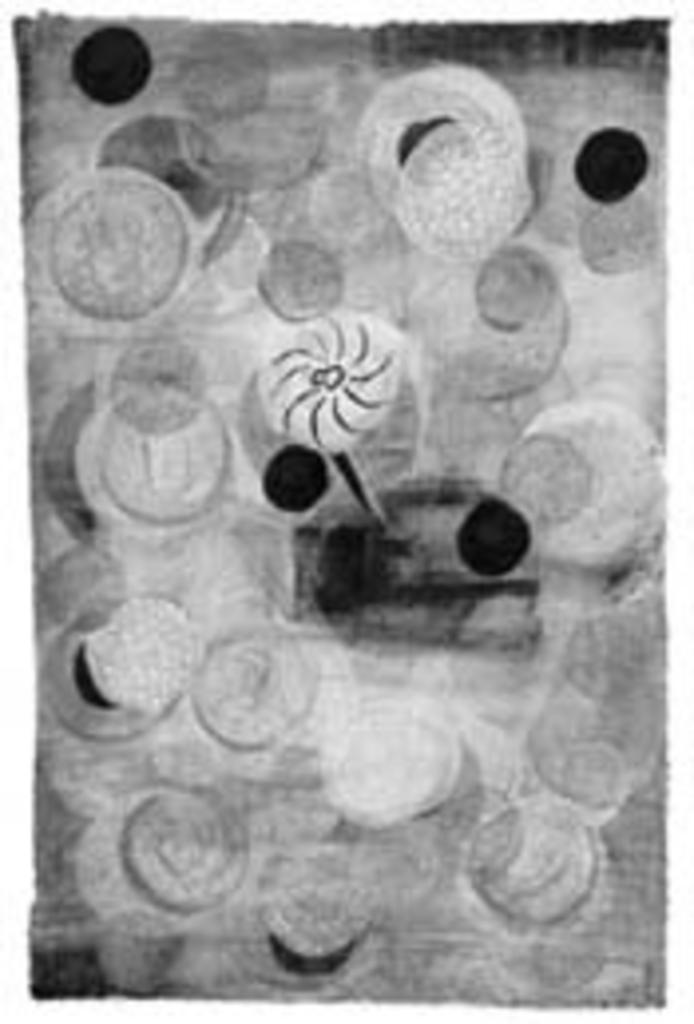 Ke-Sook Lee is a mother. She’s a gardener, a woman, and a domestic doyenne. When her sons were grown, she decided to get back to being an artist, a pursuit that languished while she was busy nurturing everyone else in the house — but one that was strengthened by her experience as a caregiver.

Unlike many women artists who set out to document their lives from a gender perspective, Lee does not portray women as victims of body image, sexism, or strict behavioral expectations. Rather, she recognizes the varied facets of womanhood; her art centers on her own life, which is a life that happens to ring as close to any universal (domestically speaking) the sisterhood has. And she seems to relish the power and the care that has made her life what it is. Like any good artist, she nurtures her work in the way a mother would tend a child or a gardener would care for a scratch of dirt, resulting in a balanced and methodical finished product. Lee’s work, in both craft and intent, comes from experience.

Lee’s newest works on paper, From the Garden, are on view at Celsius Smith through March 31.

From the Garden is an apt title for this show on a literal level because most of the paintings incorporate clay and plant pigment. On a more philosophical plane, the images can be interpreted as coming from the garden of the spirit, of one’s experience, of the soul or life or history. And the images can be straight from the traditional garden; spiders and twigs float around Gregor Mendel’s splitting plant cells, yet simple as the images are, they are pressed with the task of carrying the weight of centuries of symbolism. To read Lee’s work as a simple essay of her backyard garden would be to miss the point entirely.

Many of the works on paper have a textile feel to them, not entirely because of the stitching found along the edges or the dashed lines drawn that resemble simple hand-basting. The paper is painted and layered, giving it a tactile appearance. “Journey” is constructed of many sheets of painted rice paper sewn together to resemble a delicate quilt. The various colors of thread (blue, white, silver, gold, metallic red) are subtle, yet they are meant to be noticed not as a means of construction but as a presence unto themselves. Lee left some edges frayed, and, using a seamstress’ care, she placed other, more deliberate lines, pulling some seams out and tucking some in but pressing or folding all in their intended direction.

The tiny images in “Journey” establish the piece as a feminine journal, perhaps a history of Lee herself or a treatise on women’s cultural and biological condition. Sewing has traditionally been a feminine task, but on a more contemporary feminist level the stitches seem to represent scars on the body, either from an episiotomy or Caesarean procedure during childbirth. The work’s small embryonic figures set a tone of critiquing women’s reproductive biology.

“Garden Flower #01,” another quiltlike work, steps more overtly into the issue of gender and biology. Spiders, ovaries, an apple — these images have definite reproductive and historical connotations. The spider surfaces in many of Lee’s works, evoking the themes of home, weaving, and fertility.

Artist Louise Bourgeois’ works of the last decade also heavily use the image of a spider; a comparison of Lee and Bourgeois is almost obvious, because both women focus on domesticity and the home, and both grew up in sewing families. (In fact, Lee cited Bourgeois as a favorite artist in a 1998 Kansas City Star interview.) The spider does not seem to be a coincidental image for Lee, and may be, perhaps, a point that lets her influences blindingly shine through. Likewise, the floating cells and clusters in the garden works carry a faint taste of Terry Winters, though they feel more ethereal and less painterly than his.

Interestingly, although the artist’s hand predominates throughout these works, a machine stitch is discovered near the top of the smaller framed works. With poetic titles, such as “Awakening in her garden #06” and “She waits in her garden #01”; the delicate gestural brushwork; and minimal renderings, the presence of the small but certain machine mark leaves one to wonder: Is it the mechanical work that holds this all together? Or has woman been removed from the tactile pleasures of sewing and gardening because of our desire for faster production? Such a reading is forced, really, and perhaps unnecessary, yet the tiny detail is puzzling. It does not feel correct to assume that Lee’s message is that women confront the pleasures of home and garden like machines following a straight stitch.

Puzzles aside, Lee’s works on paper are a pleasure: beautiful, contemplative, and deeply personal. Ignore all of the memoirs surfacing in the bookstores detailing yet another screwball story; instead, visit Lee’s show and see the documentation of a woman who clearly made some sacrifices but thrives on the wisdom she received in turn.

Ke-Sook Lee: From the Garden: New Works on Paperthrough March 31