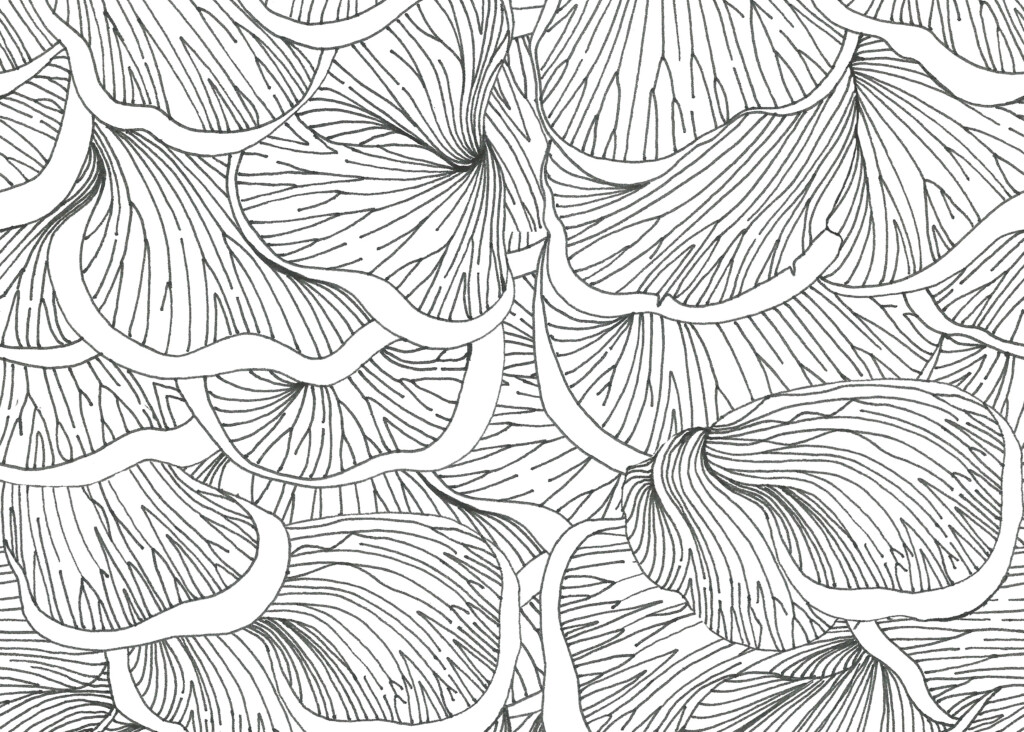 Like most genius ideas, MyCo Planet, an urban mushroom farm in North KC, emerged from a basement. Robin Moore’s basement, specifically. When Moore could not purchase the mushrooms she sought to cook and consume, she resorted to growing them on her own.

“I’ve always loved digging in the dirt, although I’m a rare breed—I love to clean, too,” says Moore.

Perhaps she embodies the antidote to the post-pandemic immune system. She delicately balances exposure and prevention—a parallel to the sterilization-inoculation dance of mushroom farming.

Moore’s academic background is in biology, paleontology, and geology. While her former lab experience primed her for the sterilization components of mushroom growing, her upbringing in northern Missouri primed her for digging through the dirt. She grew up foraging for mushrooms and growing fresh food, so she’s been inoculating herself for years. She admits that it took her some time to recognize that not everyone has been raised with the same grasp of sustainability. 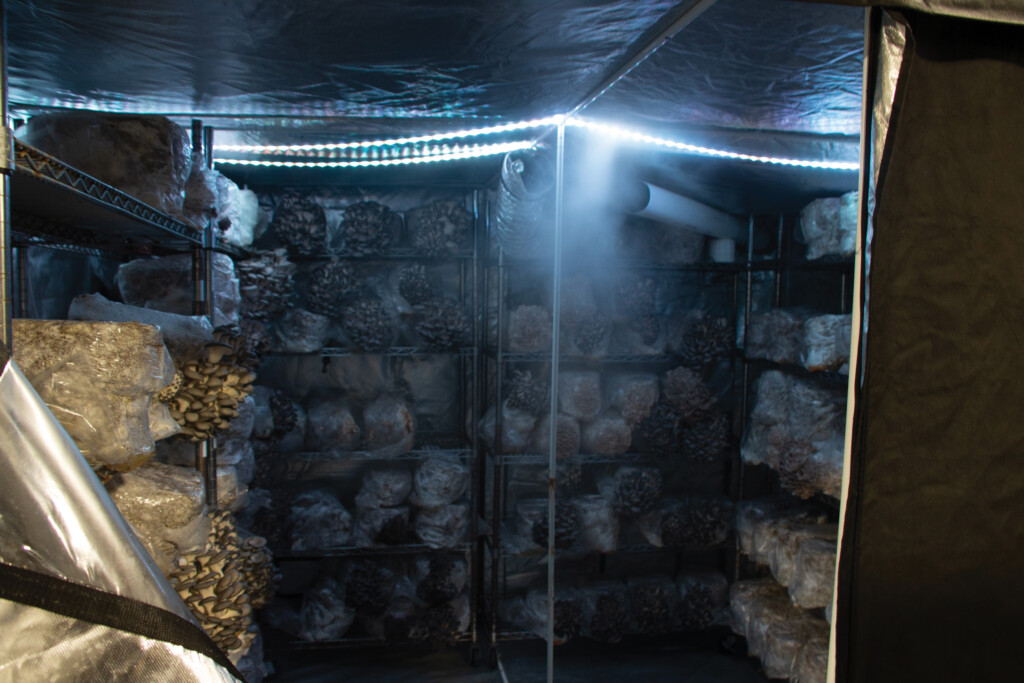 The “nightclub.” // Photo by Grace Wilmot

Moore currently lives within the Kansas City limits, where she and her children garden indoors and outdoors. Coincidentally, her yard has a morel patch, which she insists she did not plant. Maybe there is a divine plan, after all… and maybe it’s directly tied to mycelium.

When Moore outgrew her basement grow space in January 2022, she moved into a warehouse in North KC. Upon entrance of the space, tape demarcates future walls for a storefront. Beyond the taped area, the warehouse is clad with metal shelves stocked with plastic bags of inoculated substrate at different levels of growth.

Moore focuses on four strains: lion’s mane, blue oyster, chestnut oyster, and shiitake. Depending on the variety, the inoculated substrates require two to three weeks until they are ready to fruit. Some bags are polka dotted with white fungus, some are fully carpeted, and some are actively fruiting. 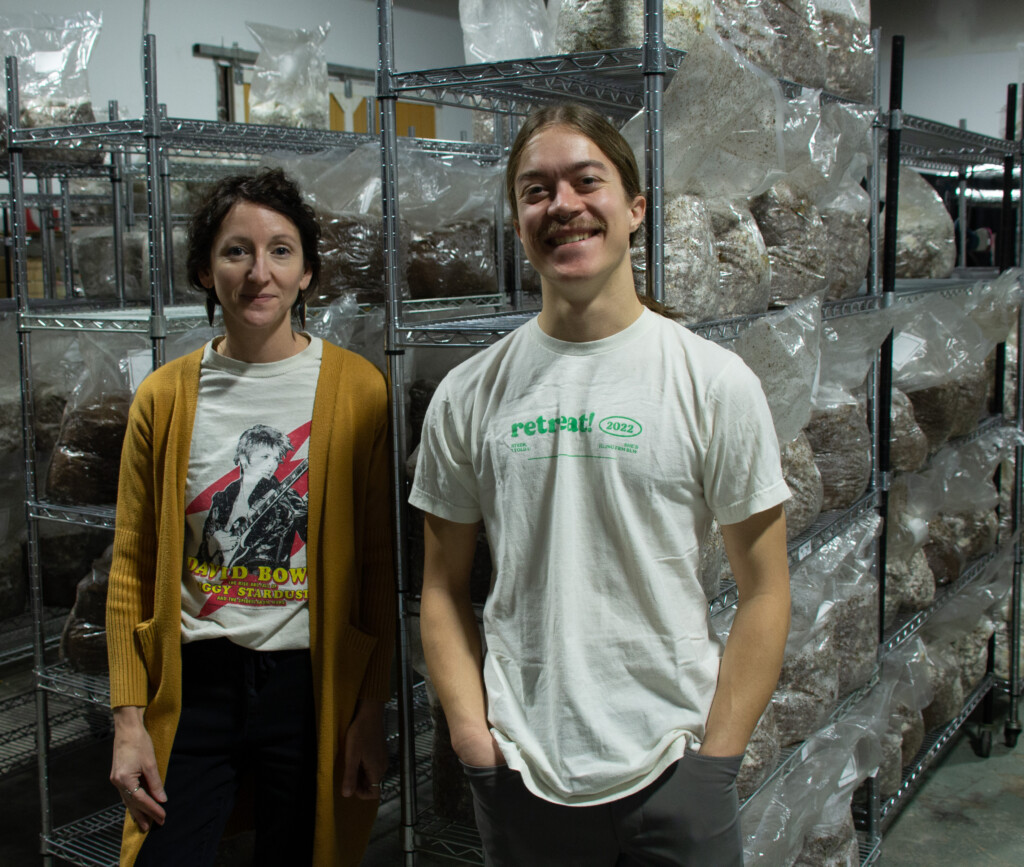 Jake Hilger, a recent UMKC graduate in environmental science who assists Moore with product management, mists a few clusters of blue oyster mushrooms as he walks past.

Most growth occurs in the black tents at the north end of the space. A string of blue LED lights illuminates the otherwise dark room, and fog billows and bends over bouquets of fruiting oysters. It’s almost reminiscent of a nightclub, except not at all—the air is clean and automated humidifiers regulate the moisture levels.

“We try to be conscious of the resources we are using,” Moore says. She giggles as she reveals that her walk-in refrigerator came from Joe’s Crab Shack.

Moore’s substrates are recycled, too. The sawdust soy hull blends are byproducts of sawdust milling and soybean farming. Following their catalyst of mushroom growth, the compost blocks are returned to urban and rural farmers throughout the area. 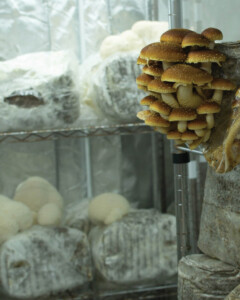 Furthermore, Moore maximizes her space with vertical growth, which she believes will become increasingly valuable, particularly within the context of climate change, for food production in urban spaces. She claims she produces about 500 pounds of mushrooms per week within 2600 square feet of grow space.

So what the hell is Moore doing with this fungal invasion?

You may have seen an ensemble of white, warm brown, and deep blue mushrooms at the City Market (and soon-to-be the Brookside Farmers’ Market). Moore also distributes to the Local Pig, Green Acres, and URBAVORE farm.

Many local restaurants utilize MyCo Planet’s products, including Voltaire, The Russell, Des Amis, and Room 39. Room 39 features a goat cheese gnocchi and a Filet Au Poivre with blue oyster mushrooms, which are in the highest demand amongst Moore’s restaurant clientele due to their mild flavor and versatility.

A few bags of dehydrated lion’s mane powder rest on Moore’s desk. She takes a mushroom blend—which includes lion’s mane, amongst others—every day in the form of capsules and often as additions to coffee or tea.

“I dove into mycology first, and then I quickly switched to mushroom cultivation, which is completely different. Someone could decide to grow mushrooms without any mycology experience, although they might not do it as well,” Moore says. “I sometimes wish I could return to mycology, but as of now, there’s not enough time in the day.”

She’s generous with her time, nonetheless. MyCo Planet’s website features blog posts about the medicinal properties of mushrooms, as well as cultivation techniques. 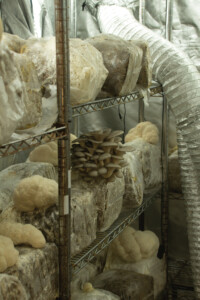 In the spirit of regeneration and rebirth of a new year, mushrooms grow on death and decay and even shit—and they’re anything but. They’ve absorbed oil spills and deteriorated plastics, and the latter have somehow remained edible. They’ve been used as reparations for horrific corporate ethics (cough Adidas cough). And if we’re talking Psilocybin, they’ve been used to treat addiction.

To ignore the potential of mushrooms would be to ignore nearly 800 years of adaptive wisdom. There’s a fungus among us, and it will be here long after we’re gone.