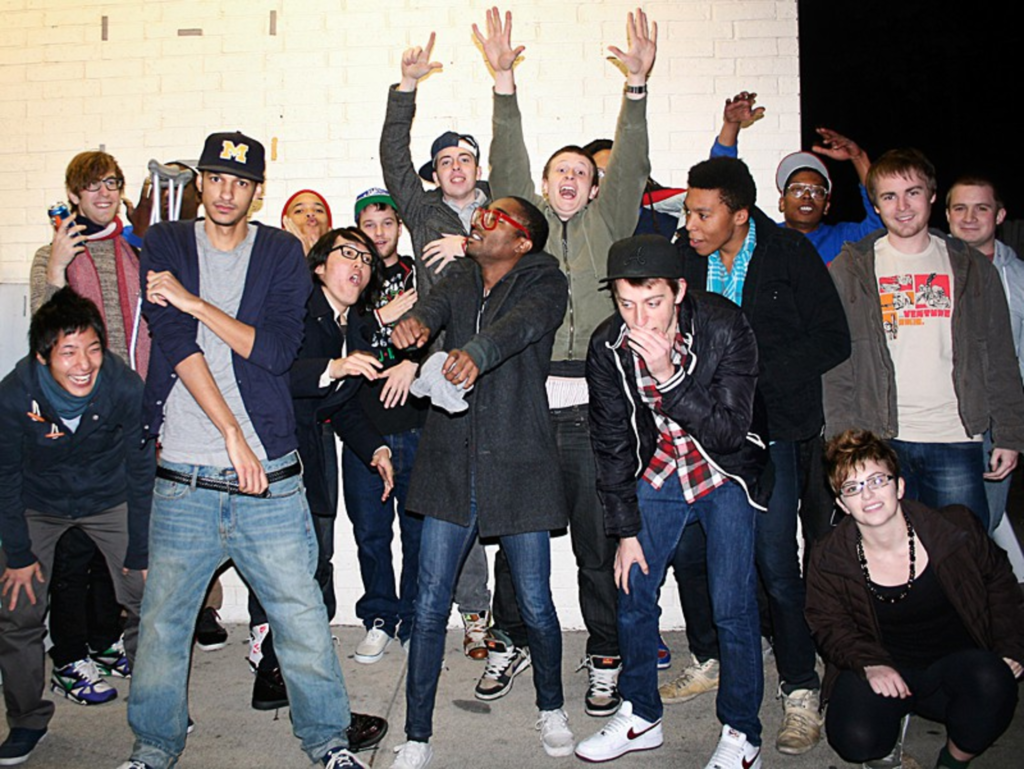 Phil Canty, one of four men behind the Lawrence music collective Team Bear Club, is cultivating an unsuspecting virtual audience.

“With the help of the Internet, we’ll be reaching out and touching everyone,” Canty says. “Whether they like it or not.”

It’s not as creepy as it sounds. Canty has spent the past two years navigating the tricky terrain of social networking to slather the Midwest with his beat-driven brand of hip-hop. The Team Bear Club sound — innovative beats and samples layered under MCs with strong pop sensibilities — has blasted through the ripped speakers of downtown bars and clubs all over
Massachusetts Street. (It’s even the theme
music to Lawrence’s popular Asteroid Head Art Club podcast.)

Now a functioning record label with personal studio space, Team Bear Club — helmed by Canty (who operates under the moniker Morri$), Tyler Waugh, Jamaal Rashad and Tom Richman — is a full-fledged company, hosting weekly hip-hop acts, dance parties and a blog where they drop remixes and original releases for the beat-hungry. But the physical studio, in downtown Lawrence, is the least important fixture of the operation, Canty says.

Team Bear Club is a club only in the abstract. According to Canty, it’s about the music, not the space. “[The collective] functions more like a revolving door for relevant local artists,” he explains. One such relevant local artist is Marty Hillard of Cowboy Indian Bear; that partnership dates back to the days of the Jen Say Kwahs, a now-defunct indie-pop band that formed in 2006.

Team Bear Club’s concept may sound pretentious, but sitting down with the crew reveals a group of charming, genuine men who smile easily and mind their manners. Canty, who works at The Toy Store in Lawrence by day, named the collective after his childhood nickname, Bear. It’s a fitting reference because his rich musical filter comes from his childhood experiences in a house devoted to music.

“My dad is a DJ and a radio personality, so I got a full dose of music and entertainment at home,” Canty says. “I’d like to think I do things in the lineage of what he’s already done, but I also think I’ve improved upon that blueprint because of the Internet.

“I had turntables when I was a child,” he continues. “The same Technic 1200 decks I use to DJ today are the same I practiced on with my dad 20 years ago. It’s sentimental.”

With influences that range from J Dilla and Diplo to Soulja Boy and, Canty says, “Topeka grittiness,” Team Bear Club’s sound is hip-hop as only well-educated Midwesterners could fashion it. The crew relentlessly layers sounds and samples until it creates an aural spectrum, adding lights and other visual components to keep audience senses awake. It’s a reflection of the group’s tireless efforts to host collaborative shows that have fans on their feet, drunk and sweaty — in other words, just as it should be. The most popular event so far is the Bear Club Rave, a team party that’s tearing through Lawrence’s college scene.

Last fall, Team Bear Club released its first physical record, a four-song EP by New Suede called Nothing But Nectar. After the first 100 pressings sold quickly, Team Bear Club followed up with its most successful release to date: “Womyn” by Rashad. Now the most downloaded release on the Team Bear Club site, “Womyn” also has been distributed at its team DJ nights in St. Louis and Columbia, Missouri.

But Canty admits that promoting Team Bear Club releases is difficult. The collective has an unyielding interest in seeking out new sounds. It’s also hesitant to define itself by any specific genre.

“We’re really influenced by the Internet and by people who spend time tracking down ‘riddims,’ rather than by genres,” he says, referring to rhythms and beats that are spontaneously, organically rooted in African history and not mechanically generated. “When I try to make music, I really want to challenge myself and other people. That’s the only underlying theme that binds all of the various things we do at Team Bear Club. We want to confront people with originality.”

Right now, the club is working on an exchange with its sister company, Tiger Fever, out of New York City. So far, the two companies have collaborated on three releases, which they’ve accomplished, rather predictably, through the Internet. They hope to host their East Coast friends in Lawrence soon and to test their Midwestern sound in New York waters eventually. They’re also hosting a special all-ages version of the Bear Club Rave party, SWAG, which affords Lawrence youngsters a chance to throw down to the collective’s beats.

But big-city adventures — and braving the treacherous all-ages realm — aren’t likely to spoil Team Bear Club’s charm. The group remains firmly rooted in the nostalgia of its musical roots and continues to hone its knack for honest lyrics and beats.

A little dose of modesty helps, too. As the interview wraps up, Canty has one request: “Will you let me know when this is going to come out in print, so I can call my grandma?”