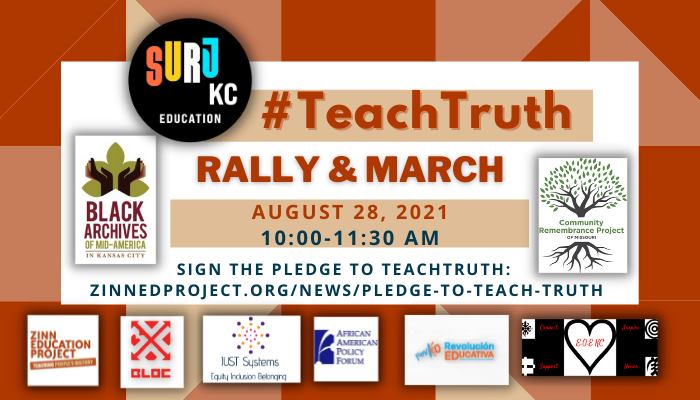 On Saturday, August 28, from 10-11:30 a.m., Showing Up for Racial Justice Kansas City will march from Lincoln College Preparatory Academy to the Black Archives of Mid-America at 18th and Vine.

SURJ KC’s mission is to stand up for people of color as a “local network organizing white people for racial justice.”

The group operates according to a set of seven shared values, some of which call for the reversal of current economic and social structures preventing the advancement of historically marginalized groups.

“We commit ourselves to taking action for racial justice and making an impact from our own situatedness,” reads a statement on the SURJ KC website. “We encourage white people to take risks in their own networks of relationships to build an anti-racist culture.”

Another pillar of belief discusses intersectionality: “Racism is interconnected with classism, patriarchy, homophobia, imperialism, ageism, ableism. We are committed to using an intersectional analysis of these oppressions and promote behaviors that confront all of them.”

The march and rally on Saturday are examples of this type of confrontation—SURJ KC invites the community to stand against legislation recently introduced across the country that would “require educators to lie to their students about the prominent role of racism, sexism, heterosexism, and oppression throughout U.S. history.”

“A good example is when, in the 1930s, government officials literally drew lines around areas deemed poor financial risks, often explicitly due to the racial composition of inhabitants,” explains edweek.org. “Banks subsequently refused to offer mortgages to Black people in those areas.”

After the murder of George Floyd in August 2020, many area school districts expressed interest in growing their equity practices. In response, SURJ KC, Racial Equity EdConnect, and JUST Systems sent a list of 12 Equity Demands meant to help them make positive changes in classrooms.

“We want the general public to be aware of the attacks on teaching the truth in our classrooms,” says Quinn White, SURJ KC Education Core Leader. “We want to invite educators, district leaders, and parents to join us in this mission to keep truth at the center of our classrooms. We want to stand in solidarity with those who have been marginalized by the troubling parts of our country’s history.”

Click here for additional information about Saturday’s march and rally.