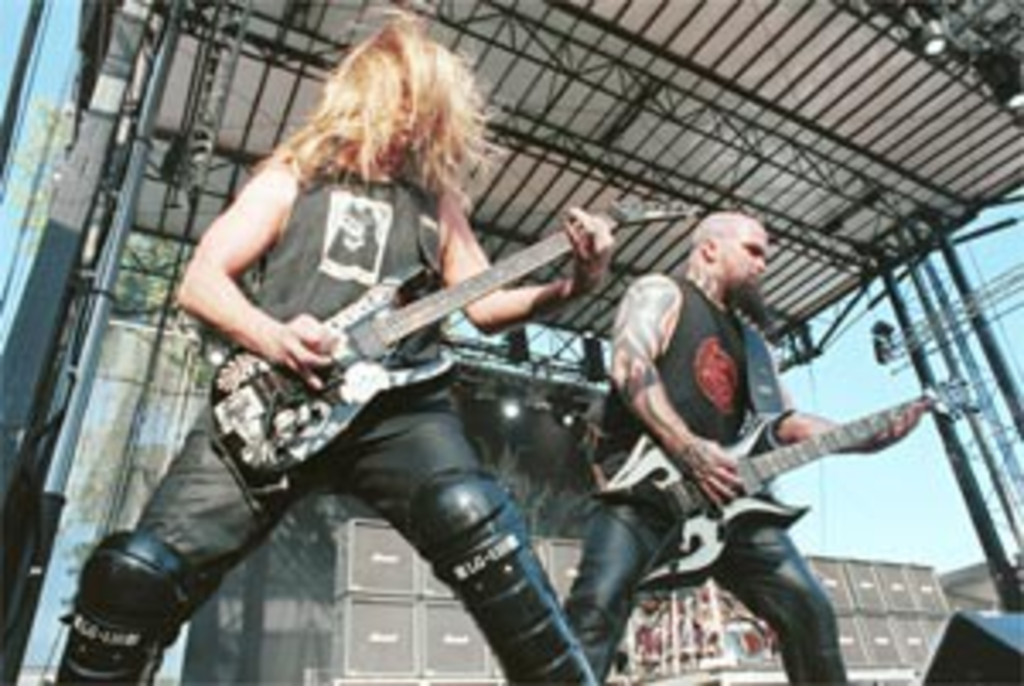 Tattoo the Earth? More like “poo-poo the earth.” This nine-plus-hour metalfest was filled with polluters and pollutants too numerous to count. Mutants were out in full force, flying their mullets with pride and dislodging any vegetation below their feet for use as a projectile during the headlining bands’ sets. The idyllic Burcham Park used to be a playground, complete with swings and such, but after Tuesday’s Satanfest it’ll probably be too contaminated for human usage, and as we speak, Governor Bill Graves is most likely considering classifying it as a natural disaster area and filing for federal assistance.

Poor park usage wasn’t the only problem, as many advertisements for the show implied the doors opened at 1 p.m., by which time as many as 3 bands had already come and gone. Even worse, two of the most credible bands on the bill, Nashville Pussy and Coal Chamber, left Tattoo the Earth before the Lawrence date, making a giant dent in the tour’s diversity by removing the day’s only three female musicians from the mix.

I was parking the car and seeking admission as Sepultura played, and it was probably just as well. The new-but-not-improved incarnation of Sepultura, with hardcore veteran Derrick Green in the place of now-Soulfly singer Max Cavalera, disappointed quite a few fans by focusing on tunes from a yet-to-be-released album instead of cranking out the complex, percussive noise that made the Brazilian group popular.

As Sepultura brought its lackluster set to a close, the nondescript grunge band U.P.O. began to perform, resulting in a two-song overlap that combined the groups’ forgettable output into an even more annoying cacophonous racket. Not that deciding which band to see caused much of a dilemma for concertgoers; most fans remained huddled in front of the main stage even after Sepultura departed, ignoring the faceless U.P.O. altogether. Finally, these patient new-metal aficionados were rewarded, as Sevendust took the main stage while U.P.O.’s last few numbers were greeted by an empty field.

Sevendust smartly turned up its metal quotient, going from the Urge-like soul/rock combo it appeared to be in Lawrence last winter to a thundering double-bass-drum-rumbling, two-geetar metal band. This transformation won the group some support from the crowd, but not much. It being July and all, Sevendust’s show was at the height of the afternoon’s cooking time, and most fans had been stewing in their own juices for hours. It took a lot of coaxing from singer Lajon Witherspoon just to get the fans out from under the shade trees near the back. Nearly every song was punctuated by orders to get up and/or to please make some noise. As the set wore on, this constant cajoling became rather pathetic.

Full Devil Jacket, the final second-stage act, played its one radio hit halfway through its set, allowing everybody to leave early and find those shady spots again, or to wander into the vendor areas, where they could get honest-to-goodness tattoos from world-famous body artists, piercings, or (for the ladies) chest airbrushings that made it possible for female fans to walk around shirtless with such aesthetically pleasing designs as miniature marijuana leaves covering their camouflaged breasts.

The last two bands of the day, Slayer and Slipknot, were clearly the fans’ favorites. In fact, nearly all of those in attendance probably would have coughed up the $30 ticket price just to see these groups without the added “incentive” of the other dozen or so. By the time Slayer opened its airtight set, the sun had fallen enough that a majority of the area in front of the stage was shady, much like the audience members. The cool but far from calm crowd responded to such aggressive tunes as “War Ensemble” and “Bitter Peace” by tossing large quantities of wet sod at the band. At first, Slayer was amused, but later, singer/bassist Tom Araya caught a nasty clump of soil in the face, though to his credit he continued playing at full speed despite having to take a break from his vocals to wipe the mud from his eyes. After tearing through early favorites, such as “Hell Awaits” and “Chemical Warfare,” Slayer ended, as always, with the classic “Angel of Death.” Araya preceded his exit by criticizing the fans’ dirt-throwing abilities in an obscure manner, but his intended targets seemed to shrug it off.

After Slayer’s set, a large group of older metal fans headed for the parking lot, choosing to forgo the Iowa-bred new-metal sounds of Slipknot. This was fortunate for the young fans that remained, as they might have had trouble scrapping in the pit with the beefy adult Slayer followers. As always, Slipknot delivered a healthy dose of theatrical antics and profane stage banter. The night’s surprise special attraction was a pyrotechnic mishap, which caught the left side of the stage on fire. When lead singer Corey Taylor followed this incident by saying, “You never know if you are going to live or die at our shows,” he wasn’t kidding.

Slipknot covered most of the material from its popular self-titled release, including the hidden track, and entertained the audience throughout with innovative crowd control tactics, such as getting all fans to take a seat during a lull in the song before having them spring back to their feet during the hectic chorus. Still, by the time Slipknot began playing its hit single, “Wait And Bleed,” many off us had had enough, and I for one went for the exit before the mad rush of mentally impaired and physically drained audience members got behind the wheel and threatened my life with their lack of driving skills. Amusingly, the band sounded even better from a distance, as the interference from the pushed-to-the-limit sound system was filtered out. So much for crowding around the stage and getting crushed — next time, I’m listening from the parking lot.