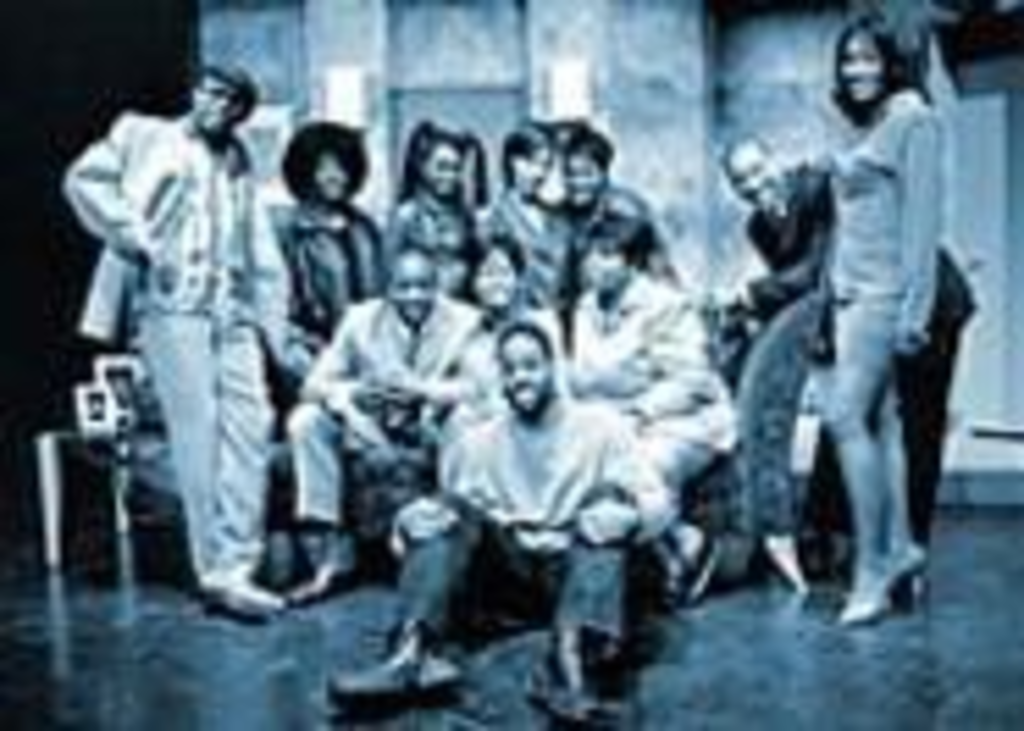 God used to provide inspiration through dreams, but now, in the wireless era, he’ll occasionally just holler at his children on their cell phones. Ask gospel playwright/director David E. Talbert, who received his latest inspiration from such an ordained phone call. Okay, so the voice on the other line wasn’t booming down from heaven — it was his friend, gospel artist Donald Lawrence — but the Lord works in mysterious ways, and in this case divine intervention struck in that holiest of settings: an Urban Outfitters in Chicago.

“He told me to put out a record,'” recalls the 34-year-old Washington, D.C., native of the fateful call. “He said that with all the people who come see my plays, it’s sure to be a hit.” Convinced, Talbert, a former radio personality, used his connections in the music industry to recruit some of the hottest names in R&B and contemporary gospel to drop songs on the soundtrack for his latest play, His Woman, His Wife. As Lawrence predicted, Talbert’s album currently is rocketing up the Billboard gospel charts, causing even music-business insiders of little faith to take note of his innovative marketing scheme.

“The music industry is wondering where this came from,” says Talbert, who earned a degree in marketing at Morgan State University in Baltimore. “It did come out of the blue, but it’s being received very well,” he says. Spurred by the warm reception, Talbert plans to release several songs as singles, shoot videos, and develop extensive marketing and promotional campaigns for the tracks.

Beyoncé and Kelly of Destiny’s Child, Kirk Franklin, Dave Hollister, Hezekiah Walker and Stephanie Mills appear on the His Woman, His Wife soundtrack, but this sort of A-list talent was not always associated with gospel plays. “For so long, gospel plays had been episodes of Where Are They Now,” Talbert says. “I wanted to broaden the marketplace by bringing more current entertainers to the mix, but because of the stigma of gospel plays people were hesitant. But once I educated them, they wanted to be down.”

On the soundtrack, R&B and gospel collide to create joyous noise that is vaguely familiar yet intriguingly different. Beyoncé and Kelly sound surprisingly mature on “Have Your Way,” as they abandon Destiny’s Child’s trademark silly hooks and banal lyrics to drop some serious girlspeak about betrayal over a melodic and haunting loop. The women of Destiny’s Child grew up singing in the church, and the emotional depth they demonstrate in this song suggests they didn’t sleep through the services. Major Figgas Kirk Franklin and Dave Hollister also appear; Franklin rants with One Nation Crew on “Don’t Worry,” while Hollister croons the Motownish “Old Fashioned Way.” Both Franklin, who has become gospel’s biggest name, and Hollister, a critically acclaimed soul singer, are veterans of Talbert productions. Franklin sang and acted in the 1996 production He Say … She Say … But What Does God Say? which was turned into the horrendous UPN sitcom Good News, and Hollister starred in 1997’s A Fool and His Money.

Although the hip contemporary gospel crowd is well represented, Talbert didn’t ignore traditional artists such as Dawkins & Dawkins, Hezekiah Walker, and Lawrence, the prophet of the project’s success. These performers heighten the intensity of the onstage drama with their powerful music. Talbert also scores a coup by enlisting Mills, a seasoned singer who displays her gospel talents in “Power of God.”

Save for soul balladeers Maxwell and Eric Benet, who declined his requests, Talbert landed every artist he wanted for his initial venture into soundtrack compilation. Perhaps Maxwell and Benet will be lured in by his next project, What Your Man Won’t Do, and if not, there shouldn’t be much of a wait until yet another play and accompanying soundtrack. This self-taught writer has had eight plays produced in the last eight years, and during that period more than 2.5 million people have attended his productions. Each play usually swings through more than 30 cities, with eight shows a week — nearly all of them sold out.

Like his previous efforts, His Woman, His Wife is an adult comedy dealing with relationships. Talbert often interviews friends about their exploits in the dating game, then uses these anecdotes to develop characters. His storylines and set designs are simple, as he places emphasis on sitcom-style comedy and fast-paced drama. In His Woman, His Wife a young couple (Denise, played by Stephanie Mills, and Stuart, played by Tony Terry) who have been shacking contemplate getting married (she’s for it, he’s against). In one scene, Denise’s mother (LeCresia Campbell) quips, “A man will never buy the cow as long as he’s getting the milk free. And with all the free milk he’s been getting, he should be lactose intolerant.” As this exchange indicates, gospel plays are often scolding fables, but the energetic mix of acting and singing often overshadows the preachy tone.

These plays have become to working-class blacks what Broadway shows are to high-society whites. Popular with black folk in culturally rich cities such as New York, Los Angeles, and Chicago, Talbert’s productions also fare well on the chitlin circuit in cities such as Kansas City; Charlotte, North Carolina; Augusta, Georgia; and Birmingham, Alabama. But despite such success, Talbert’s plays have drawn little mainstream attention. “Gospel plays are ignored because the plays don’t fit into their mold of what theater should be,” he says. “Mainstream has made theater for the elite and those who believe they have arrived. What we have done is made theater accessible for the everyday man by creating stories that are relevant to their lifestyle.”

Ironically, gospel plays also have received stiff criticism from black journalists, who accuse productions such as His Woman, His Wife of “ghettoizing theater” and bringing the art form down to a lower level. Talbert defends his art, saying, “My philosophy is similar to the O’Jays — I give the people what they want. Theater is not just for people who have college degrees, drive Benzes and can afford $90 tickets. I can do Rent, I can do Beauty and the Beast, I can do Ma Rainey’s Black Bottom. I can do all that stuff, but my people don’t want that.”

Instead, Talbert reasons, his people want to see representations of themselves and of their family members on stage. “African Americans live on an emotional plain,” he explains. “We are a tribal people, and we’re people who are filled with the music and dance and praise and worship. That’s why at black churches they talk back to the preacher. You go to a movie, black people talk back to the screen. When you go to a gospel play, we talk back to the actors and actresses — that’s how we are; we are emotionally charged people.”

Talbert contends that while Broadway sells aesthetics, he sells emotion. “Mainstream theater thinks that because gospel plays aren’t as aesthetically pleasing that we are subpar,” he says. “It doesn’t matter that we don’t have a million-dollar budget to make helicopters fly over the stage like in Miss Saigon. Black folks could care less about a helicopter. We hear a helicopter and start running for cover because we associate helicopters with the police and a drug bust. We have a different experience. We have a different appreciation.”

Often, the art forms for which African Americans feel such a unique appreciation are co-opted by white America, but thus far gospel plays represent an undiscovered source of creative culture. With Talbert’s success, that might be about to change. Again, his phone might be about to herald good news, but this time it will be Hollywood on the other end, spreading the Lord’s rewards in the form of a lucrative development deal.