Take me out to the ball game, take me out of the crowd 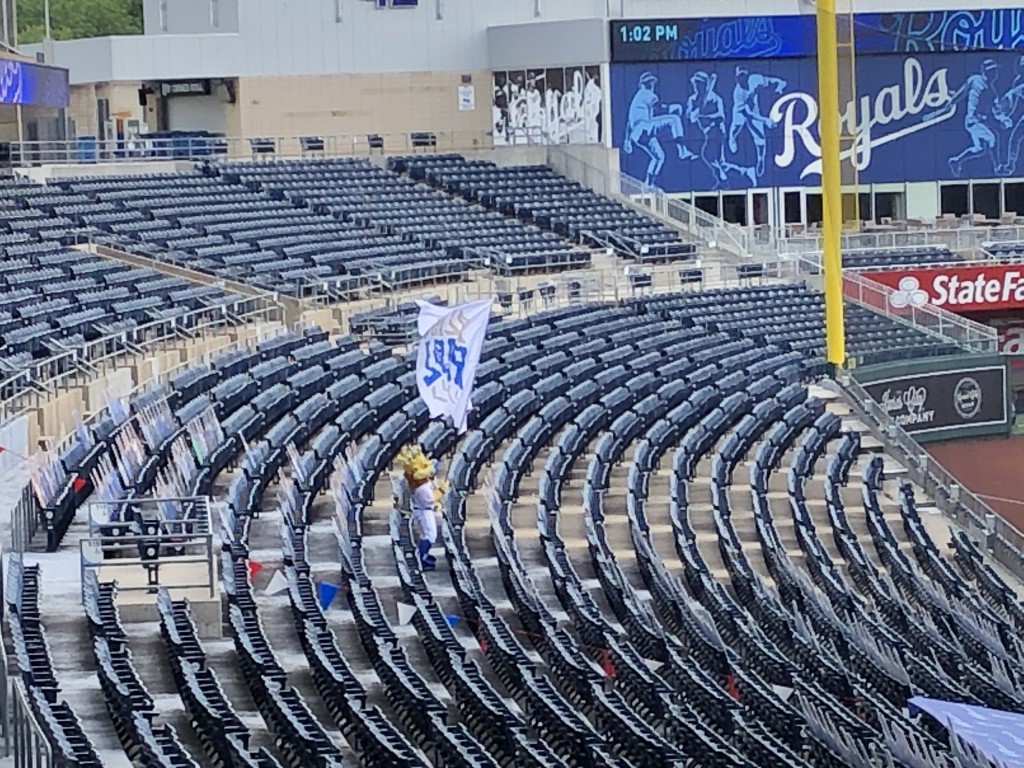 Empty on the inside. // Photo by Joseph Hernandez

The last time I went to a Kansas City Royals game, I saw an absolute moonshot come off the bat of the opposing team’s player. The time before that, I was blessed to see my friend destroy himself with $13 Boulevard beers. Before that, I won a bet for free ice cream that I later lost because I went double-or-nothing on Jeopardy’s Greatest of All-Time tournament (thanks a lot, Brad).

Imagining going to a Royals game this year was similar to previous years: hanging out with friends, enjoying the atmosphere, and the same expensive beer in a big souvenir cup. The outcome of the game is the last thing on my mind.

I didn’t think the next time I’d be here, a football player would have partial ownership of the team. I also didn’t think I’d be in press row with sportswriters more experienced and much better at this than I am.

I didn’t think it’d be during a pandemic with an empty stadium. It almost feels like this shouldn’t be happening.

But all of this is happening. In the year 2020, on the second day of August, I covered a Major League Baseball game. The great American poet Meek Mill once said, “Seen my dreams unfold, nightmares come true,” and this day was the only time I can relate to a hip-hop artist.

On this day’s plate was a duel between the Chicago White Sox and our boys in blue. Two teams loaded with potential. 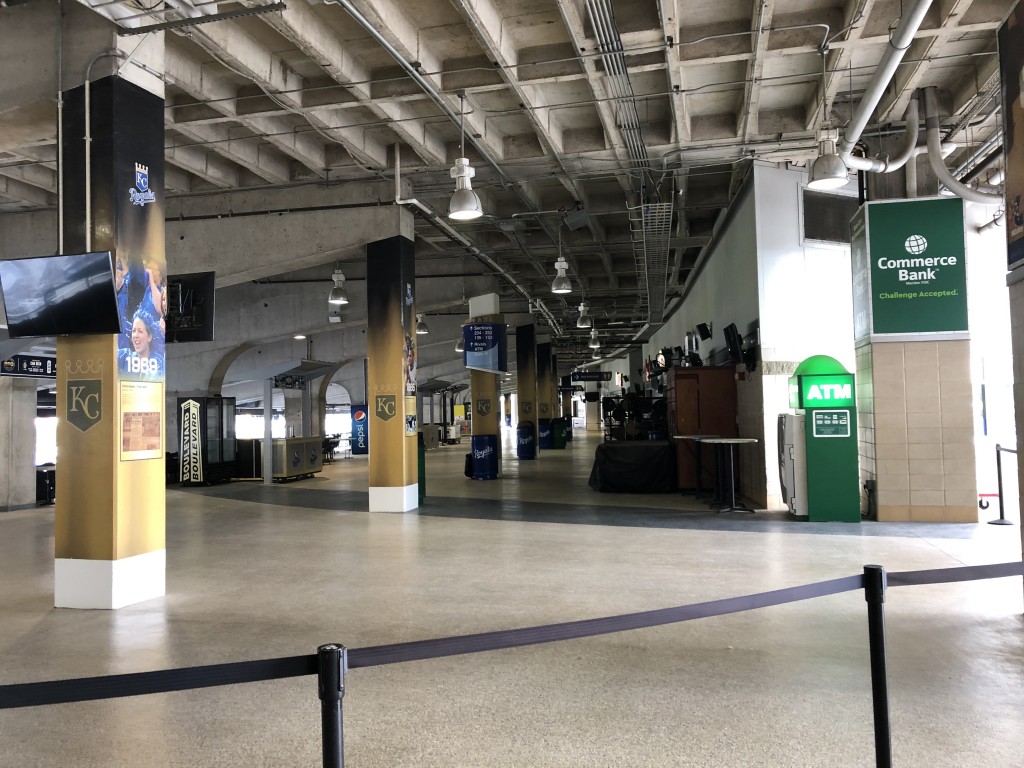 I’ve covered sports before. My eventual degree from the University of Missouri’s School of Journalism will have a sports journalism emphasis. I’ve reported on high school football, basketball, softball, and wrestling.

On the collegiate level, I had stories on Missouri’s men’s basketball and swim and dive teams. I even had media access for the Tigers’ two games in the Hall of Fame Classic at the Sprint T-Mobile Center in November.

Absolutely nothing could prepare me for this.

Each of those events had crowds there. Every single one, I could go up and talk to a coach or player after the game and ask them about what transpired during the contest. I could interact with other reporters. I usually didn’t because I’m a scared baby who fears talking just as much as I fear spiders. It’s not illegal, but now it’s somewhat of a safety hazard.

The fact that live sports are happening is mindboggling. I’m here for a good time, not a long time.

The entrance closest to Lot B is the only one open. A familiar entrance for myself as it’s usually the way I’ve entered into past Royals games after taking the long trek from the parking lot to the gates.

Before I entered, I had to receive my media credentials at one of two open ticket booths. The other box checked in security.

The person at the booth handed me a waiver stating that MLB nor the Royals are responsible if I contract the virus while at the stadium. It took me by surprise, but I should’ve expected something like this. I skimmed through it and signed my life away

Security at the entrance gates took my temperature a couple of times to verify that I didn’t have a fever and checked my bag. I’m positive the sight of my Powerpuff Girls lanyard and my tattered wallet threw them for a loop.

The first thing you see when you enter the stadium is an “Always Royal” banner featuring Alex Gordon, Salvador Perez, and Adalberto Mondesi. It’s haunting seeing this place empty. It feels like the start of a horror movie with how quiet it was.

I get my first look at the field as I walk to the Diamond Club. The organization puts the media here instead of the usual location as they keep everyone in one spot. Ropes lead media members into the section. It’s the only way in and it’ll be the only way to exit the stadium when the game ends. Another safety measure to ensure as little physical contact as possible.

The sight of empty seats throughout the stadium is weird and it’s even weirder that I’m here. It’s also strange knowing this is the first (and most likely only) time I’ll have a seat in the Diamond Club.

Masks are required and they’re practicing social distancing by making sure everyone has a table of their own to work on. One thing I didn’t know about the Diamond Club until now is that the tables have electrical outlets for people to plug their chargers into. While us commoners fight at charging kiosks located in the stadium, the elite can plug in and out at will.

This is my spot for the next three hours. It’s time to play ball. 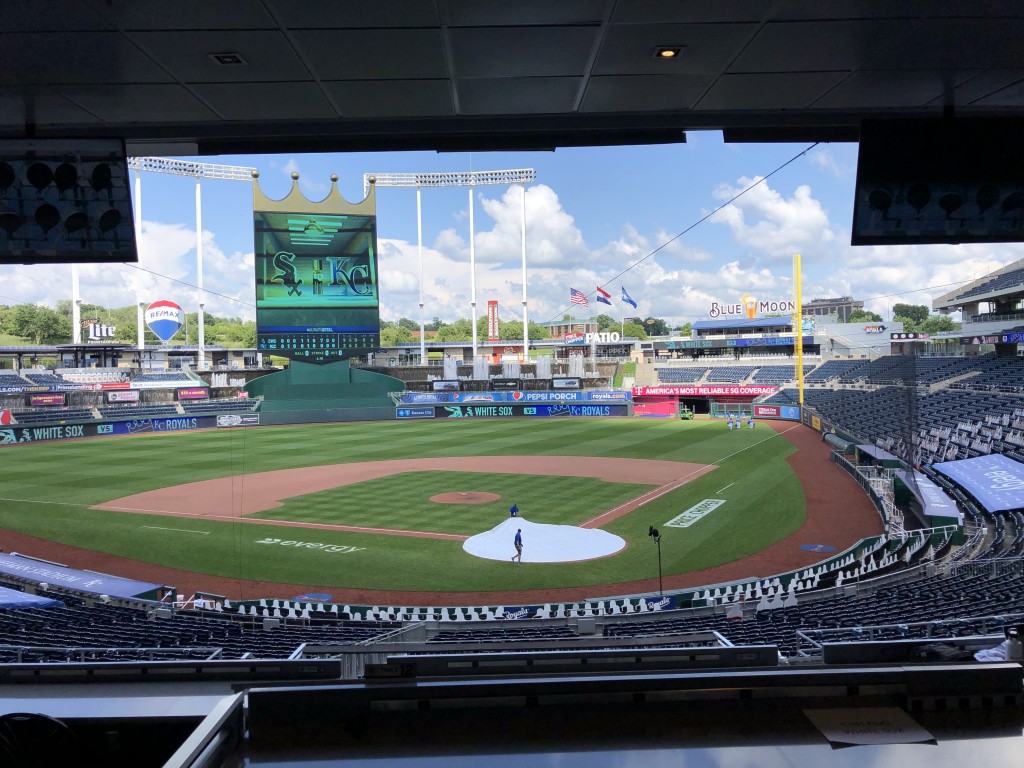 Time to Play the Game

Seeing Sluggerrr wave the flag in the left field foul section not how I envisioned starting the game, but it happened. As cute as it was to see our lovable mascot continuing his routine, it was depressing to see. It made me wish that we were in a different timeline where there’s a cure for the virus and Kobe Bryant is alive.

A young boy throws the virtual first pitch as Sluggerr does his thing, signaling for the game to start. Nothing has changed from the last time I was here. They use the same old songs to introduce the away and home lineups.

The game goes on as usual. Nine innings happen. Pitchers pitch and batters bat. Players substitute for each other when the situation calls for it and managers challenge umpire rulings. The defense makes great plays and the offense scores runs.

The music selection is everywhere. Where else can I hear the sounds of the Beastie Boys, Daft Punk, Lenny Kravitz, Red Hot Chili Peppers, Jason Derulo, The White Stripes, The Sugarhill Gang, *NSYNC, The Beatles, and Hootie and the Blowfish? All normal artists for a Gen-Z kid to grow up listening to.

Another great part about going to a live baseball game is looking at the video board and learning about the players. On this day I learned about White Sox second basemen Nick Madrigal. He made his professional debut on July 31 and is the same height as me, while I’m one year younger. There’s nothing more humbling than seeing someone in your age range do the thing you dreamed about doing as a child. 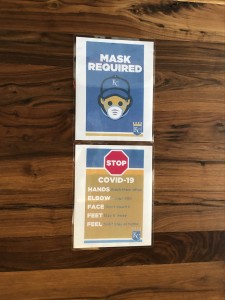 Learning that made me wish to be one of the fountains blowing in the wind in the outfield without a care in the world. Or the two World Series championship flags above the Royals Hall of Fame.

I can imagine standing behind the fountains as the wind blows water in my direction. Gordon’s home run in the second inning had the fountains shoot up like it usual when the Royals perform well. When the fountains are just vibing, it’s an incredible ambient sound and sets the mood. It’s calm, peaceful, and tranquil, all things we need to feel eventually.

Classic fan interaction soundbites, such as the Addams’ Family theme song or the calvary charge, can be heard. The “Lets Go Royals” soundbite is also in the mix, with authentic crowd noise to replicate the feeling. Some of these sounds I recognize from the beatings my college roommate handed me in MLB: The Show, including a perfect game our freshman year.

The piped-in cheers when a Royals player does a good thing is just as weird as having cardboard cutouts of fans sitting behind home plate and around the lower bowl. The piped-in groans when the White Sox do something well is how I feel when I see someone in public not wearing a mask.

All of this happens in 3 hours and 1 minute, as the White Sox defeat the Royals 9-2. Chicago put seven runs on the board in the seventh inning. After it scored the fifth run,  “I Got 5 On It,” by Luniz began to play through the arena speakers. 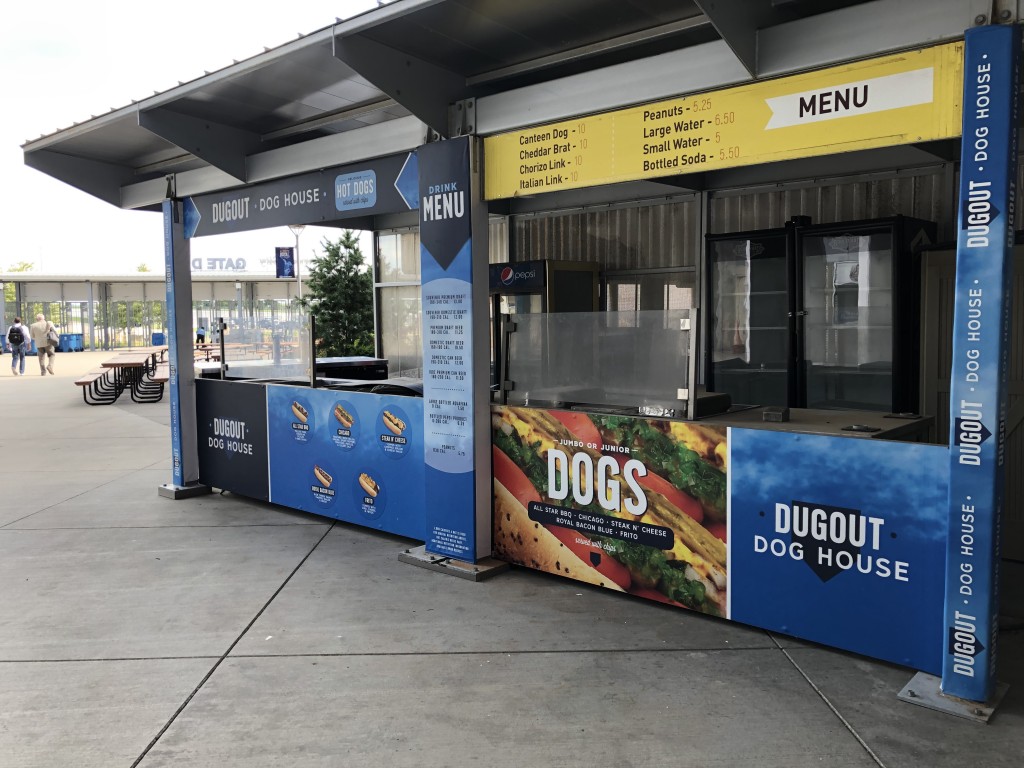 The press conference for the Royals came to an end and so did my time at Kauffman Stadium. I sat there for 10 minutes, looking into the field as the groundcrew cleaned up and made it look nice. All of the thoughts running through my smooth brain consisted of “I can’t believe this happened” or “what the f*** did I just participate in.” I also had to wait for my friend to pick me up.

Walking through the parking lot felt like the boneyard in The Lion King. A barren wasteland just sitting off I-70. I’ve never seen the lot as empty as it was and I’ve been (un)fortunate enough to stay in this lot 3-4 hours after Chiefs’ games ended in victory, as my family wanted to celebrate with more drinking.

This is one of the weirdest things I’ve ever done. I don’t know if it’s good to add an MLB credential to my wall of press badges or disgusting that I was there. For years I’ve dreamt about covering the Chiefs or the Royals for a publication. The people that I care about know that my perfect life consists of writing about the teams that have been apart of my life for as long as I could remember.

I don’t know if this will happen again. If it does, I’m hoping it’s full-time and I’ll be able to go into the locker rooms and talk to the players about their performance. If it doesn’t, it makes for quite the story to tell my kids in the future. Not everyone goes from sitting in row XX in section 435 for a sold-out Game 1 of the 2014 World Series to covering an empty stadium game. 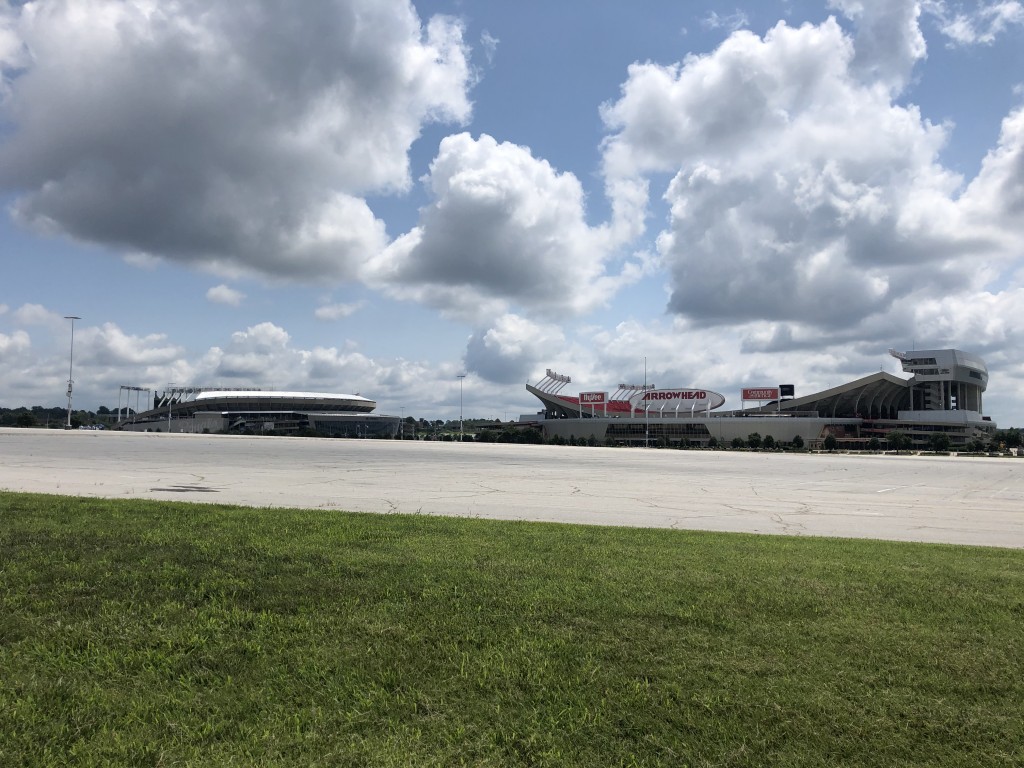 Women's professional soccer is headed back to Kansas City in 2021