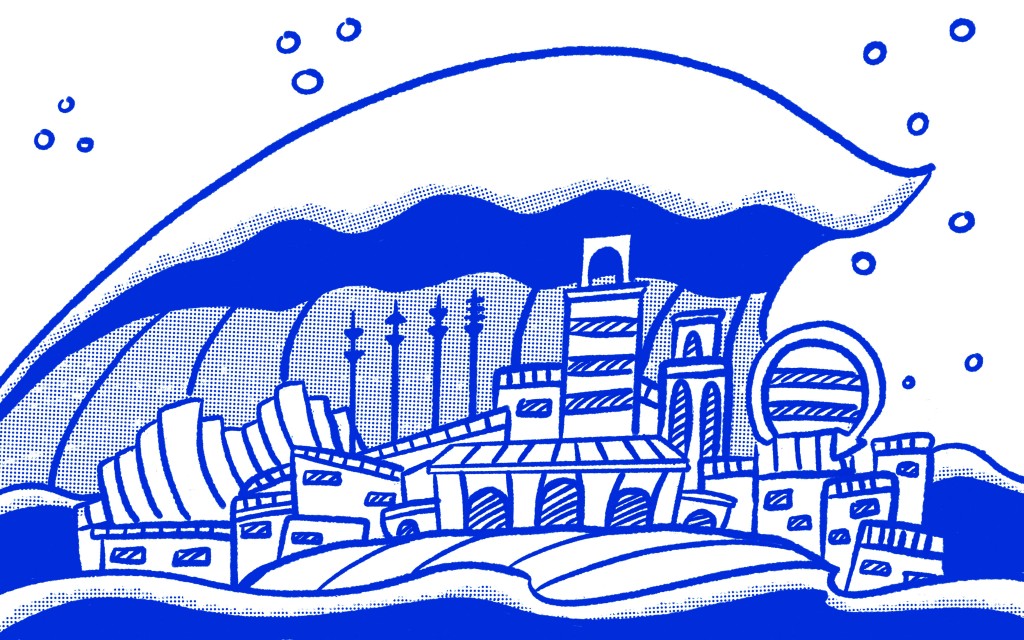 Editor’s Note: A version of this story appears in the October issue of The Pitch, on stands now, under the title “Praying For Tidal Wives.” The piece was updated by the original author to reflect the escalation of recent events.

As the history of this sad, calamitous, batshit-crazy year is being written moment by moment, Kansas City needs to claim its place in the narrative.

Let the record reflect that we joined the resistance. That we were not fooled by a chain of fools.

That when the COVID-breathing fraud stood maskless this week at the White House entrance and told us we had nothing to fear from the virus, we told him to stuff it. And then we voted.

Just turned 18? Great. Your first election is epic. You have until tomorrow to get yourself registered. Just turned 90? Wonderful. Let’s make certain you get a ballot and that it gets counted on Nov. 3. We in the Kansas City area need to create our own blue wave, one so big and beautiful it gets noticed in Jefferson City, Topeka, even as far as Washington.

It sucks that, when the votes in the presidential election are counted, Missouri and Kansas are nearly certain to be counted for Trump in the Electoral College. These are red states, and we probably can’t change that between now and Election Day (although at least one poll shows Trump with only a five-point lead in Missouri). But don’t let the shade of red discourage you. This is about us making a statement. And electing a Democratic governor in Missouri. And a U.S. senator in Kansas.

Four years ago, 60% of registered voters in Kansas City—about 130,000 people—went to the polls, and 75% of them voted for Hillary Clinton and her Democratic running mate, Tim Kaine. Not. Good. Enough. We need more voters and more Democratic votes. Same with our suburbs.

Why vote for Joe Biden, a 77-year-old gaffe-prone white guy? We have a million reasons.

Because he has Kamala Harris, the face of a better, emerging America, as his running mate. Because he understands the threat posed by COVID-19. Because Biden will restore our standing among other nations. Because he won’t consort with tyrants. Because he’s a decent human being—and right now, that’s enough.

The so-called debate last week was awful to watch, with Trump snarling and yapping like a barely restrained attack dog. But one hour and 39 minutes into the horror show, Biden gave us a glimpse of what our nation’s better angels could look like.

Trump had launched into a hate-filled tirade about Biden’s son, Hunter, raising a past history of drug use. It was an act of cruelty, pure and simple, designed to drag Biden into the murky bog where Trump dwells.

But Biden didn’t go there. He took a couple of deep breaths and turned a deeply personal attack into a moment of grace.

Maybe Joe Biden wasn’t your first choice to be the nominee. Mine either. But he is a person of strength and fundamental goodness.

And this. This above all. Joe Biden is not Donald Trump.

Who out there is not exhausted by the daily outrages this man inflicts on our citizens, our psyche, on our notion of what America is supposed to be? If you raised your hand, you either have the stamina of Atlas or you are a Trump voter and we don’t even know why you’re still reading this piece.

There is no place even to begin. The man lies about everything. He blatantly seeks to divide us along the lines of race and religion. He says white supremacists are “very fine people.” His administration rips children from the arms of parents who come to our southern border seeking nothing but safety. He wants to occupy cities with federal troops, not because he gives a damn about us, but because he despises our diverse communities, our tolerance, and our ideals.

Also, he suggested that we drink bleach.

Need more motivation? Vote because Donald Trump is trying to stop you from doing so. He’s trying to scare us from voting by mail. He wants to put security forces at the polls in swing states—but only in the places likely to vote Democratic. Let’s hoist the man on his own oversized petard and run the score up against him.

The same goes for the governor and secretary of state in Missouri. Mike Parson and Jay Ashcroft want to make voting as difficult as possible in the cities and Democrat-friendly suburbs. With the pandemic in full swing, they had to be browbeaten into easing up on restrictions against mail-in voting, and even now they want people to pay a notary to stamp their ballots.

This is the duo, remember, that wants to all but outlaw abortions in Missouri. Parson signed the legislature’s 2019 bill banning abortions after eight weeks of gestation, with no exceptions for rape and incest. Ashcroft nixed any hope of overturning the law with a citizens’ petition by delaying approval of the ballot language until it was too late to gather enough signatures.

With outrages pouring out of Washington in an endless spigot, it’s easy to lose sight of the damage that Trump’s clones are wreaking in our states. (All of the Republican party is Trumpian now.) Missouri’s governor’s race is winnable with a big Democratic turnout. And how great would it be if Kansans elected Democrat Barbara Bollier to the U.S. Senate?

Let’s do this, people. The deadline to register to vote is tomorrow. Absentee ballots are available now. You need to print out a mail-in application from the secretary of state’s website and mail it to your local election board. Or walk the application into your election board’s office or satellite office. Or just show up on Nov. 3 and vote.

We have a chance to show Donald Trump and his wannabes in Washington and the state capitals that this region is a force to be reckoned with. Vote for a city and a country where Black lives matter, where immigrants are valued, where we lift people up instead of stomping them down. Vote big and vote Democratic, and let that be our shining line in 2020’s tumultuous story.