Taco of the town 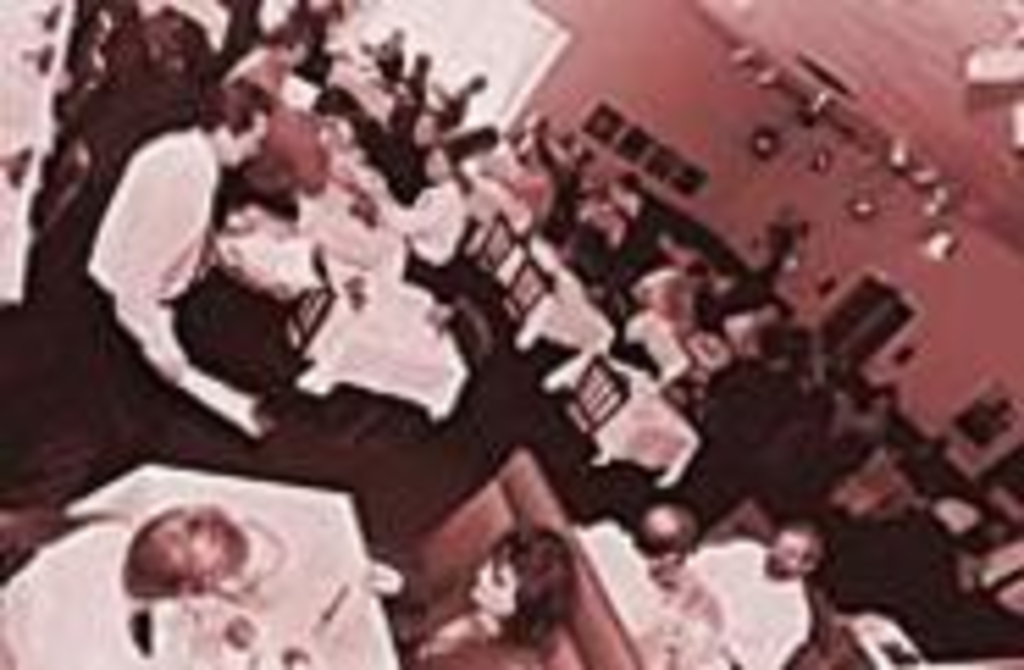 In the heart of a very Midwestern strip mall sits a Spanish-Mexican restaurant that, by local Mexican-restaurant standards, has more in common with the tony Café Allegro or Hannah Bistro than its bustling downtown cousins, with their neon beer signs and unabashedly casual service style. In fact, while sitting at Guadalajara Café (1144 W. 103rd Street), I wondered whether the clientele — mostly middle-class, middle-age, and white — sets the tone for this surprisingly elegant ambience or is simply drawn to it.

What makes the restaurant truly different from its better-known contemporaries down on Southwest Boulevard is the service — slick and formal — and the serious, even demure atmosphere. On a busy Saturday night, the main dining room was cool, collected, and composed. The tables were draped in white linens and a sheath of white butcher paper, the votive candles were twinkling, and there were fresh purple flowers in glass vases. It was pretty fancy, although the crowd wasn’t exactly the glam set. There were a couple of families and one table of giggling single women, but most of the diners had probably driven over a few blocks from their south Kansas City or Prairie Village neighborhoods. I suspected that most of them were retired or nearly so. In an adjacent booth, a 60-something suburban couple ate their dinner in absolute silence. I felt embarrassed to be watching them, but I was fascinated that not a word passed between them for an entire meal. At one point, the woman, probably a grandmother, shyly sipped at her salt-rimmed margarita through a tiny straw, then looked blankly across the dining room and uttered a lonely sigh.

I thought it was one of the most poignant things I had ever seen.

“Oh, God,” shuddered my cynical dining companion, snapping up a warm, crispy tortilla chip from a green plastic mesh basket and sloppily dipping it into the accompanying salsa (fresh-tasting and peppery, with lots of cooling chopped cilantro). “It’s Heartbreak Hotel. Is this what I have to look forward to in my old age? Tense, silent dinners and wistful moments over a cocktail?”

“You should be so lucky,” I reminded her. “The alternatives are worse.”

On the whole, the Guadalajara itself is a pretty happy dining alternative. Tucked between a Waid’s restaurant and an Applebee’s, the pumpkin-color Guadalajara Cafe building practically screams for attention from its less stylish, all-American neighbors. It’s the showiest venue on the block, inside and out.

The interior of the dining room, painted in shades of lemon and melon green, may look festive enough, but this is no raucous, rowdy joint. The well-scrubbed servers are dressed in freshly starched white cotton shirts, ties, and neatly pressed black pants. Polite and shy, they proudly sweep over to a table with a taco combination plate as if it were the most extraordinary and expensive dish on the menu (it is neither, by the way).

But if the service is formal and the music is played at a discreet level, the food more than makes up for it with fire and bite. An appetizer of fat, juicy shrimp sautéed in a sauce of garlic and fresh red peppers ($8) comes in three degrees of hotness (the medium hot is more than sufficient, trust me) and arrives at the table steaming and dappled with sautéed fresh mushrooms and four cool wedges of avocado. One could easily make a meal out of this dish alone, dipping tortilla chips into the sauce to lift out a succulent mushroom. But be careful: The sauce easily spatters on light-colored clothing, especially if you’re even a slightly messy eater, as I am.

There’s an adequate wine list and the usual suspects in the imported and domestic beer categories. But I ordered a glass of club soda so I could clean my shirt (looking blankly across the dining room and uttering a lonely, embarrassed sigh as I scrubbed) and cool my palate at the same time. It was a wise choice because my dinner, one of the “especialides de la casa” was fiercely hot — in temperature, not spiciness — and the plate (“Don’t touch it!” warned the waitress, too late) felt like it had just been removed from a nuclear reactor.

This meal, the Guadalajara Dinner ($13.95), had a nice-size cut of charcoal-broiled steak (it could have been more tender), a chile relleno, an enchilada, and rice and beans (the latter bubbling and popping on the plate like freshly erupted lava). It was very good, although my companion’s choice, Steak Guadalajara ($10.95), a nice cut of tenderloin sautéed with onions and peppers and smothered in a fiery tomatilla sauce, was better.

There are eight steak dinners on the menu, a culinary reminder that the actual Guadalajara was one of the “New Spain” cities, created after Cortes and his fellow Europeans arrived in Mexico in the 16th century. The seafood and beef dishes here are distinctly Spanish in flavor, especially a dish of shrimp and mushrooms sautéed in garlic and butter ($11.95) or a variation on that theme in a white wine and oregano sauce ($11.95).

There’s plenty of the familiar fare we’ve come to love as “Mexican,” including the lovable taco (nice and crunchy with fat wedges of tomatoes and shredded Monterey Jack cheese), tostadas, enchiladas, and the like, served in different combinations (ranging in price from $7.95 to $9.75, all with rice and beans). That inspired American creation, the taco salad, is served five ways, including topped with cooked pork in a spicy green pepper sauce ($6.75). And for vegetarians, there are five creative possibilities, two of which boast cooked, tender cactus as a primary ingredient.

And, being wary of any dish boasting a “special” sauce or a “secret” sauce (there should be no secrets when it comes to my stomach), I passed up two chicken dishes with those very ingredients — Arroz Con Pollo and Polla A La Ranchera — in favor of Polle en Mole ($10.50), a luscious chicken in a rich, sweet cacao-flavored mole sauce.

I wish there had been some rich, sweet chocolate dessert to end the meal. On one occasion, my server (a young lady from Yugoslavia) suggested the flan, which had a pasty texture I found more coarse than silky. Much worse was the so-called “fried” ice cream. This dessert is traditionally served hot, the crumb coating (typically crushed cornflakes) around the hard-frozen ball of ice cream having been freshly deep-fried so the exterior is crusty, crispy, and warm, the interior creamy and cold. At the Guadalajara Cafe, the baseball-size scoop of ice cream is brought out icy cold, its crumb crust (which may indeed have been fried, days earlier) dripping with chocolate syrup and honey, now just another frozen texture to awkwardly try to poke a spoon into. By the time the dessert was thawed enough to eat, it was a gooey mess. This time it was me who had the sad, wistful sigh as I watched my dessert melt in front of me.