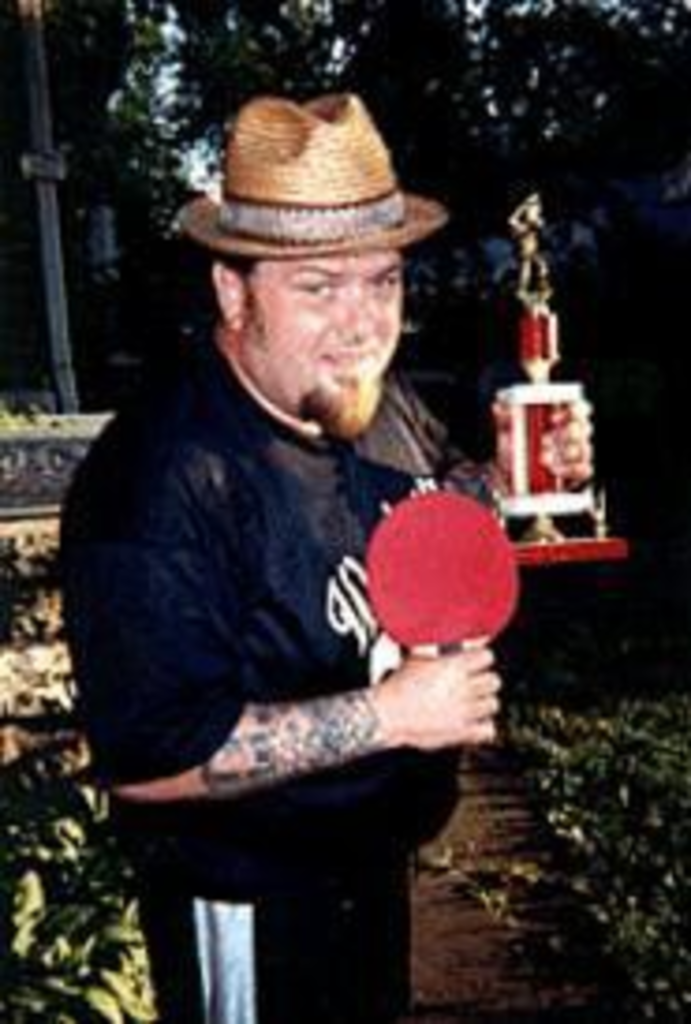 In the mid-’90s, the infernal MTV Sports and its future-Burger-King-shill host Dan Cortese treated an unsuspecting MTV audience hoping to see actual videos to Rock and Jock specials instead: Talented but irritating athletes mixed it up on the basketball court or the baseball diamond with the likes of Coolio and Marky Mark. Pingpong was nowhere to be found on the music channel, leaving Recycled Sounds to take on the decidedly non-extreme sport for its own ultracompetitive tournament pitting area rock stars (and, sometimes, the paddlers who love them) against each other.

“We realized we could not haul pool tables outside,” says Recycled Sounds manager Anne Winter, explaining why the store eschewed a game with a stronger rock and roll tradition (e.g. George Thorogood’s “Bad to the Bone” video). And so the tournament originated in 1995, celebrating the release of the Kansas City Misery compilation. The table tennis resumed the next year, but when some out-of-towners took the trophy and went home, the tournament, coincidentally or not, went on hiatus.

“A band from L.A., Atomic Boy, got in the tournament, won the trophy and hauled it off to California,” Winter says. “I’m going to get ahold of them and challenge them to come back out here and give us a chance to win it back.”

Atomic Boy fended off some strong local talent. “There was one exchange student from the Art Institute who actually called his mom up in Malaysia and had her send his pingpong paddle,” Winter recalls. “He was amazing.”

Such wild-card participants are again welcome to square off against local rockers for fun and prizes. Entering the competition is free, as will be snacks from cosponsors The Pub. (The day’s entertainment also comes courtesy of Rocko Records, The Hurricane, El Torreon, Owned and Operated Records, Bloodshot Records, and Recycled Sounds.)

So far, no local musicians have made a side career out of the professional pingpong circuit, so it’s to be assumed that as pingpong players, most are great rockers. And rock they shall. Scheduled to perform at the store are well-dressed mod-style punks Go Generation, blistering post-hardcore veterans Season to Risk, the deeply soulful Gadjits and teary-eyed country troubadour Rex Hobart and the Misery Boys — all but one of whom has a new disc to celebrate. (That’s one of the reasons Winter gives for reviving the tourney.) As for the one group not supplying a party favor, Winter says, “The Gadjits don’t have a new release per se, but we’re all behind them one hundred percent in hoping that they get something together real soon.”

It seems as if Season to Risk’s The Shattering has been in the works since the previous tournament in 1996, though it’s actually been only about two and a half years. Band members’ coming and going led to many false starts, but now that the album’s done, frontman Steve Tulipana labels it S2R’s best yet.

“We’re a live band, and trying to translate that onto an album is always really difficult,” he explains. “I think with this new album we got it. It just sounds large. You can hear all the elements, you can hear the vocals for once, you can hear everything. It’s crisp, but it’s not sterile.”

The night before the tournament, Season to Risk will perform at its CD release party at The Hurricane alongside Wretch Like Me and Someday I. Will such revelry affect the band’s athletic performance the next day? “Probably,” Tulipana admits, immediately switching gears to talk up the group’s resident pingpong all-star Duane Trower. “He’s a martial-arts guy, and he’s got that ninja hand-eye coordination,” he raves.

Winter concurs. “He’s incredible,” she says. “But the funnest to watch has got to be Ernie Locke, and he’s pretty darn good. He has a certain style, that Kansas City style.”

“It’s probably because of my fat,” Locke counters, noting that in recent years he’s let his pingpong abilities deteriorate. “I used to be pretty hot, but I’m going to have to brush up.”

Locke’s current band, Parlay, which is gearing up for a tour in October and preparing to record a new album soon after, commands much of the leisure time he once devoted to the paddling arts. But on tournament day he’ll be representing his old squad Sin City Disciples, which will be releasing Layla Deluxe, an ex-panded version of its four-song cassette Layla that adds singles and live tracks.

“What it is, basically, is the article on record of Sin City, Mach II,” Locke says, noting that Layla Deluxe features the Disciples’ second lineup: Locke, John Paul, Bret Engel and David Hogerty. “Sin City was never a really good recorded band,” he continues. “We were always a better live band, so it’s cool to get out some live recordings.”

Layla Deluxe will serve as a soundtrack for the pingpong action, but Locke won’t be among the afternoon’s live performers. “There’s not going to be a reunion,” he says. “I wish there was, but there’s just not going to be one.”

While Sin City Disciples has a new disc but no live set to accompany it, Go Generation experienced the opposite scenario at its alleged CD release party for Upturn at El Torreon, which offered no discs for sale. However, drummer Jon Cagle promises the discs will be in by tournament time and that they will also be available for Go Generation’s Friday, August 24, gig at El Torreon with Kosher, The Dukes and Sense of Self. Former high school baseball star Cagle also vows that the sports-minded trio (he claims that vocalist/guitarist Patrick Butaky is an avid naked-touch-football player and bassist Devin Blair is a weightlifter who likes to stare in the mirror) will dominate at least one other team. “[El Torreon manager] Brian Saunders has been talking trash to us,” he reports. “He says they’re going to kick our asses.” In the spirit of friendly competition, he adds his own reluctantly cocky prediction: “I guess we’re going to kick their asses.”

With Rex Hobart and the Misery Boys (whose new single Wasted Days and Wasted Nights features a heartbreaking take on Poison’s “Every Rose Has Its Thorn”) playing the role of uncategorizable dark horses, late additions to the bill Mr. Marco’s V7s adding an air of mystery and The Gadjits waiting in the wings with youthful exuberance, it’s difficult to predict who the overall ass kickers will be. But Winter says that regardless of who takes top honors (as of yet, no L.A.-based teams have entered), the tournament’s goal will still be fulfilled. “We really want this to be a Kansas City event,” she says. “People get down on the scene, and we’re out to prove that’s not true.”