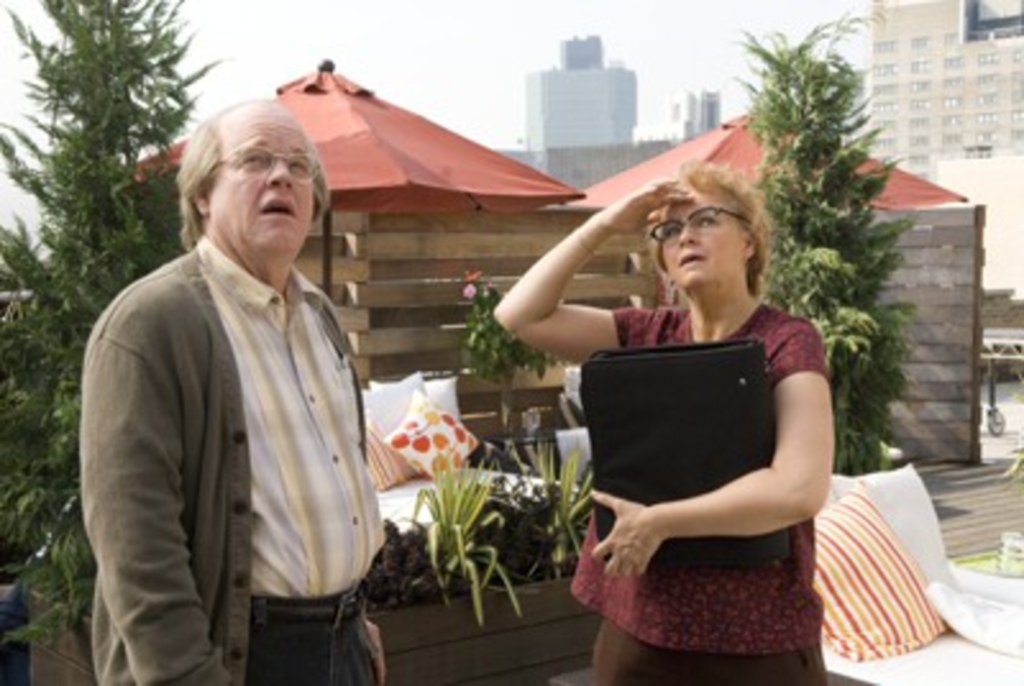 If you traveled the length of John Malkovich’s medulla oblongata, hung a sharp left at the desk where Samuel Beckett’s Krapp recorded his last tape and walked through the adjoining door of the interstellar hotel room at the end of 2001, you might end up in the vicinity of Charlie Kaufman’s Synecdoche, New York — a two-hour loop-de-loop thrill ride so deep into the eternal gloom of its writer and (first-time) director’s spotted mind that his Adaptation seems, by comparison, a sun-drenched landscape epic. Like that film, Synecdoche is a part confessional, part satirical investigation into the creative process and the notion — or the absurdity thereof — that art can lead to understanding.

Time clearly isn’t on the side of regional theater director Caden Cotard (a typically excellent Philip Seymour Hoffman), the obvious Kaufman surrogate who, in the opening scene, wakes up on the first day of fall only to hear a poetry professor pontificating on the radio about the season’s symbolic value as “the beginning of the end.” Pay close attention to things like newspaper headlines and the expiration dates on milk cartons: You’ll notice that by the time Caden sits down to a chaotic family breakfast with his wife, Adele (Catherine Keener), and daughter, Olive, nearly two months seem to have elapsed. If it’s true that on the calendar of the universe, humankind doesn’t show up until sometime around 11 p.m. on December 31, Caden Cotard is a man gripped by the sensation that at any moment, he will hear the chimes of midnight. Little wonder, then, that he has cast his latest production, a revival of Arthur Miller’s Death of a Salesman, with actors in their twenties and thirties. The tragedy, he tells them, comes from the fact that they, too, will someday be old.

Caden is so deeply self-absorbed, he scarcely notices that his own marriage is fraying at the seams, until Adele absconds to Germany with Olive and a chain-smoking lesbian friend (hilariously played by Jennifer Jason Leigh) to pursue her art career, while Caden finds solace in the arms of his younger leading lady (Michelle Williams). But the real turning point comes when Caden receives one of the MacArthur Foundation’s $500,000 “genius grants” and rents a cavernous New York City warehouse to stage his magnum opus — a play about “everything,” modeled on his own life and the world around him.

There’s no script, per se — only scraps of paper handed to actors, scribbled with motivations like “you lost your job today” and “you were raped last night.” Eventually, Caden even casts an actor (Tom Noonan) to play himself directing the play, who in turn casts yet another actor to play himself. In the name of yet more “brutal truth,” the sets are given literal fourth walls. At one point, it’s revealed that Caden’s literal living theater has been rehearsing without an audience for nearly two decades. Yet the truth, as is its way, remains just out of reach.

Given creative carte blanche, Kaufman seems to have crammed every idea he’s ever had about life, art and women into a single, totemic work. He’s willing to try anything, like giving the ditzy box-office girl (Samantha Morton), who fears “dying in the fire,” a house perpetually ablaze with orange flame. That makes for a sometimes unruly affair but one that’s as audacious as anything I’ve seen on a movie screen this year.

Time is only one of several abiding obsessions here. Hypochondria dominates the early scenes as does an indulgence of homophonous wordplay. Even Kaufman’s title is a verbal pun.

At Cannes, Synecdoche, New York premiered to a chorus of mostly withering reviews, which branded Kaufman something of a surrealist one-trick pony. That last accusation may be valid, but the trick — and the intensity with which Kaufman’s actors devote themselves to it — is nonetheless dazzling. Like most of Kaufman’s work as a writer, Synecdoche, New York is a head trip that returns to a place of real human emotion — in this case, to the idea that no matter how brilliant we may be or think we are, we’re all looking for a little guidance (or, yes, direction) in life.

When I interviewed Kaufman after the release of Eternal Sunshine of the Spotless Mind, he spoke candidly that he felt he had run dry of ideas. That was also around the time that he was said to be writing an original horror screenplay for Spike Jonze, and Synecdoche, New York is the movie that reportedly materialized out of that process. The result is a horror show, all right, albeit one in which the bogeymen are the twin specters of physical and creative death, with Kaufman trying to sort out which of the two is preferable to the other. So it’s only fitting that Synecdoche, New York ends not with a fade to black but rather to white — the light at the end of the tunnel, perhaps, or that far more terrifying prospect of the blank page and its infinite possibilities.