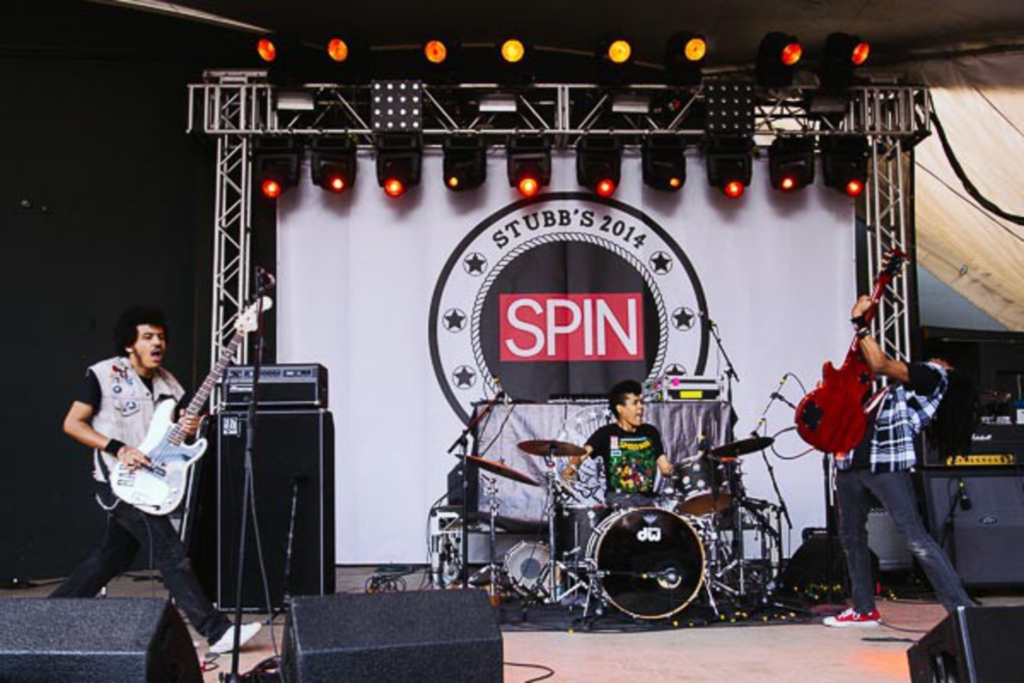 Friday started with a bang – a really fucking loud bang, in the form of local rock heroes Radkey. The nearly legal trio of brothers kicked off the Spin Day Party at Stubb’s outdoors on the main stage around noon, and seeing the boys repping KC on such a prestigious stage brought a little blooming flower of pride to my heart. For their part, the brothers Radke took the unassuming crowd by surprise.

Some dude next to me turned to his friend in the middle of Radkey’s first song. “Who is this?” he asked.

I decided to help them out. “This is Radkey,” I said, restraining myself from overloading these strangers with information (“… .and they’re all brothers, and they’ve been home-schooled and raised on rock and roll, and the oldest one is only 20, and that’s their dad, Matt, over there – he manages them – and they have the coolest relationship ever, and they’re from St. Joseph, Missouri, and you should know who they are,” are all things I wanted to say, but didn’t.)

“Radkey? This is tight, man. I like it.” I spelled the name for them, and the dudes moved up closer. 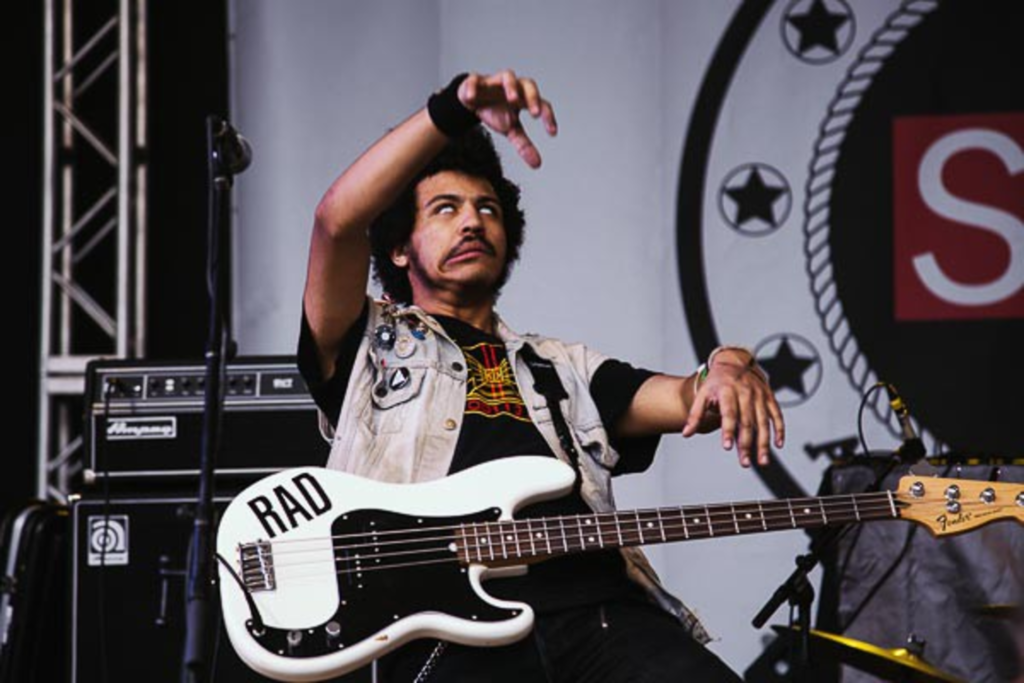 As the 18-year-old bassist and middle bro, Isaiah, attacked his strings, he approached the pit and pulled wacky rock faces, surely giving the dozen or so photographers something for their portfolios. As usual, Isaiah took the lead in crowd banter, something he pulls off with a coarse kind of charm.

“Fuck yeah, SXSW and shit. It’s awesome playing in Austin,” he said, somewhat breathlessly, after the first song. “It’s hot as fuck, though. Not as hot as last year. Last year was a motherfucker. This song is a motherfucker. It’s called ‘Cat and Mouse.'” 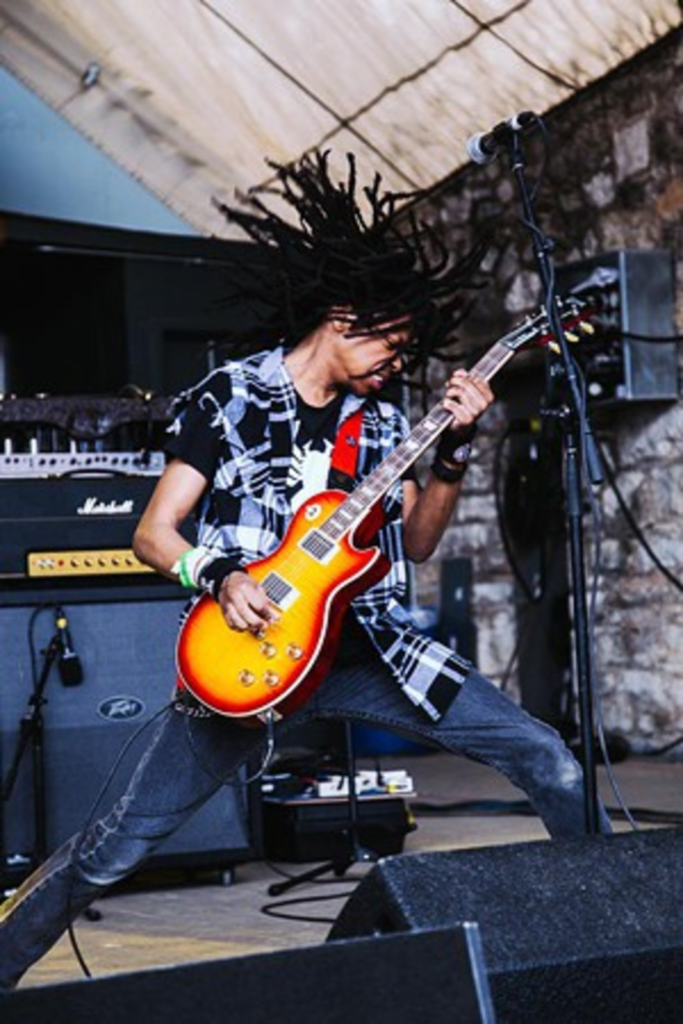 This was the first time I’d seen Radkey on a large stage in front of an audience that wasn’t full of locals. It was revelatory. The band was on point, the vocals stacked precisely. Radkey’s brand of rock and roll is designed to look messy and sound unrehearsed, a front that the brothers accomplish well, but there’s a firmly controlled musicianship underneath – one of the biggest things that set Radkey apart from, well, bands that are messy and don’t rehearse. 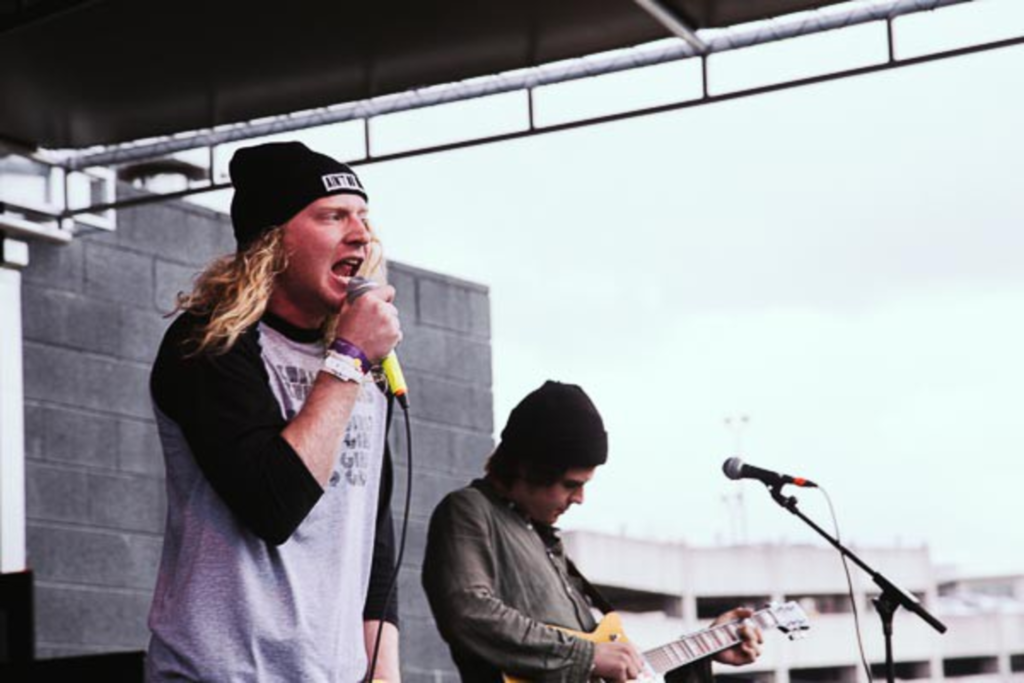 The Orwells followed Radkey on the smaller outdoor stage almost immediately, and I had been wanting to see them all week. But Radkey proved a hard act to follow, and although the Orwells had some dynamic chord progressions, I couldn’t really find much else to hold my attention. They sounded like rock-lite following the blistering set from Radkey, and I heard others in the crowd around me remarking similarly.
[page]
Baltimore’s Future Islands were up on the main stage right after the Orwells – Stubb’s and Spin kept things tight – and they might have been the highlight of SXSW for me. That might be in part because I didn’t expect too much from them – I’d seen them years before, opening for someone at First Avenue, and vaguely remembered not really liking the whole synth-driven strange-pop thing they were doing. But their performance was nothing short of magical. 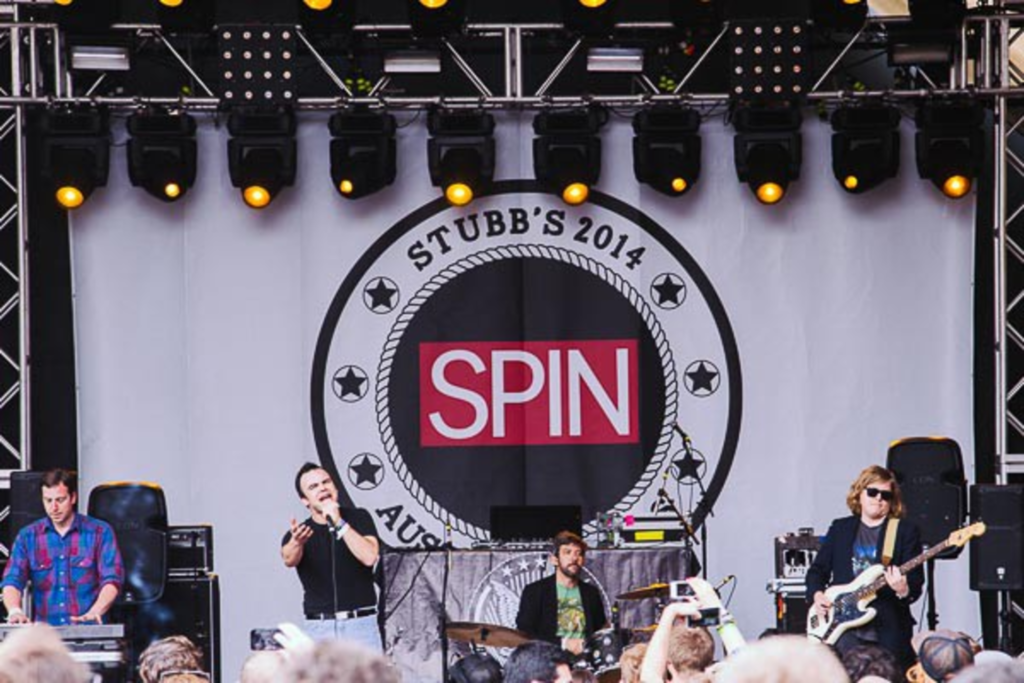 Lead singer Samuel T. Herring walked onstage with a cigarette dangling from his lips, holding a cup of what he later explained was tequila, wearing a black T-shirt tucked into belted, light-washed dad jeans. He looked like a Guido version of a 1980s icon, or maybe like he might have been on Jersey Shore at one point. He said this Spin show was the band’s seventh at SXSW. I was a little worried about what was about to happen onstage – the members all seemed to be some combination of fatigued or hungover beyond all remedy.

But one verse into “Spirit,” the first song on Future Islands’ set, and everything faded away. There is no finer showman than Herring; he gives his performances everything he has. And he’s got a lot of something wild. With the Elvis sneer and lip curl, the incredible pelvic thrusts, hip rotations and other enviable dance moves, his deep-throated Gollum-bellow vocals and the way Herring’s windows-to-the-soul blue eyes seemed to pierce the heart of every single audience member, there was no escaping the masterful artistry that was happening onstage. Herring’s black shirt was visibly slick with sweat by the middle of the set.

Early on, Herring had mentioned that the band was playing a different set for every SXSW show. They wouldn’t get away without playing “Seasons,” though – the excellent first single off their upcoming full-length, Singles, and the song they played on Letterman last week, which got the Internet salivating.

And Herring had a heartfelt introduction for “Long Flight” as the set closer: “Sometimes when you’re on the road, you lose things,” he said. “It starts small at first – your favorite shirt, a pair of pants. But then you lose the one you love or the house you bought. This song is dedicated to all the bands performing today, and all the bands at SXSW who are on the road and away from the things they love.”

I was captivated, and most of the audience responded similarly to Future Islands, save for the spare comment here and there from those unfamiliar with, or unprepared for, Herring’s particular personality.

“That really weirded me out,” I overheard a fellow concertgoer say after Future Islands’ set. I felt bad that the transcendental experience I’d had wasn’t a universal one. 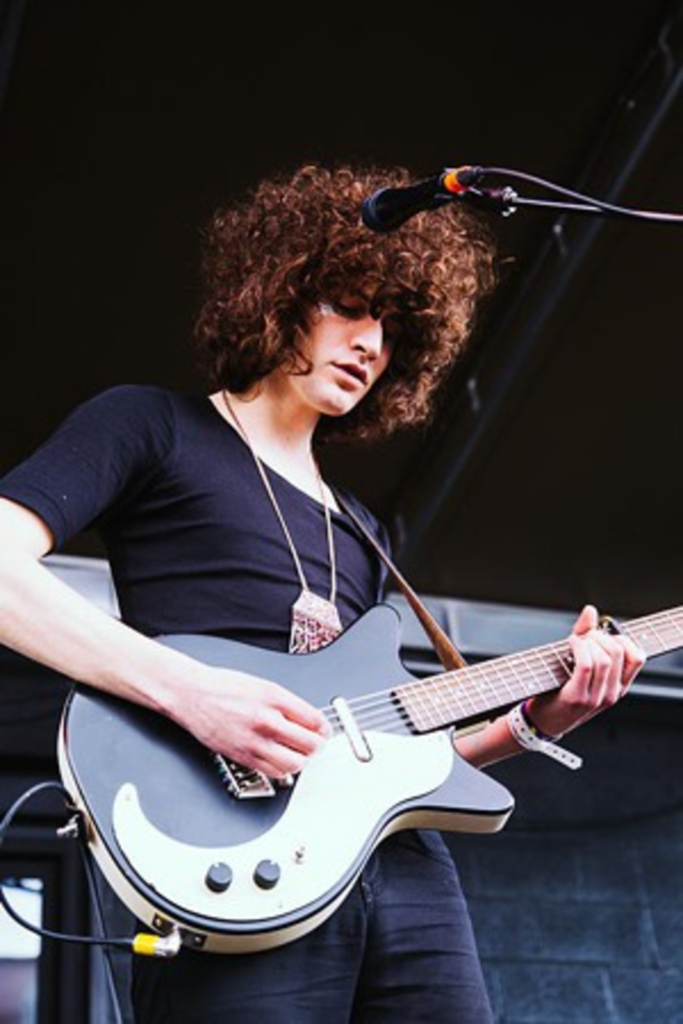 Temples followed Future Islands on the small stage. The Brit four-piece received a lot of buzz prior to SXSW, and I was eager to see if they would live up to their reputation for vibe-y 1960s-era rock. They did, and I enjoyed them, and other people seemed to as well, but as with the Orwells, I felt like I might have liked them better if I hadn’t had such an incomparably amazing music experience with Future Islands five minutes prior. The sound was great, and the accolades earned for the band’s February full-length debut, Sun Structures, is well-deserved, but Temples – though they looked like Woodstock reincarnated – had a pretty unexciting stage presence. I remembered the Strypes from Thursday  – is there something about U.K. bands that bars them from looking like they are having any fun at all onstage?

[page]By midafternoon, Stubb’s was swelling. Warpaint was on the main stage after Temples, but there was nearly a half-hour delay as some technical sound issues cropped up, and I wandered off shortly before they began their set, opting for a change of scenery – and perhaps a less-crowded show. 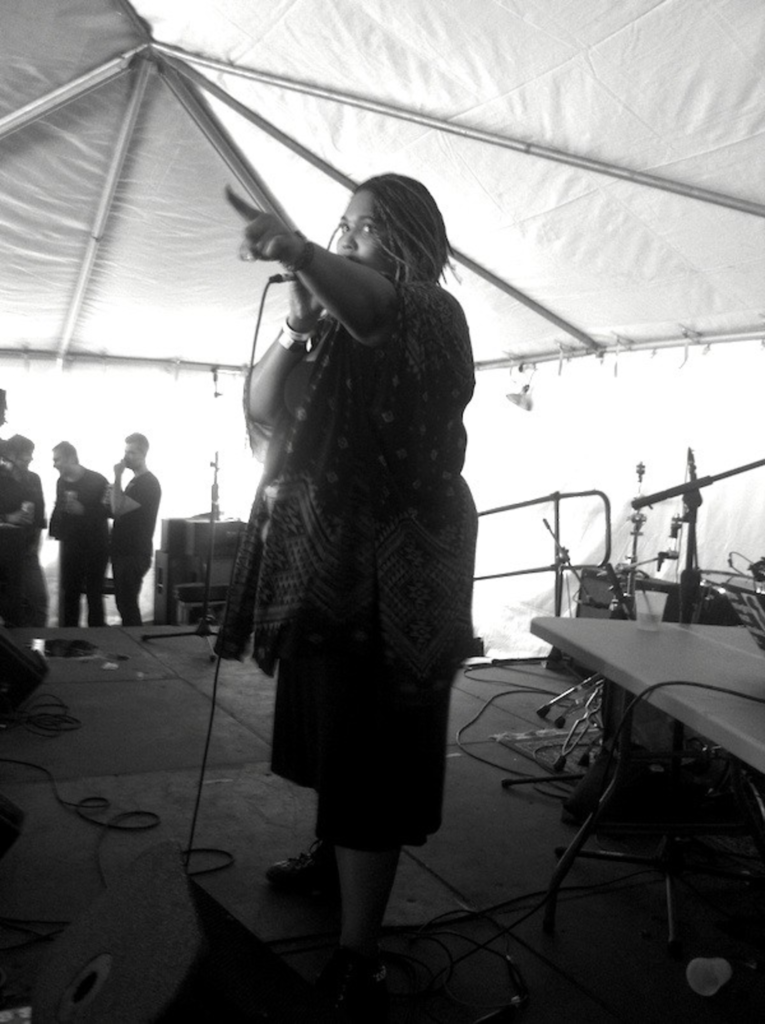 Over at Holy Mountain, Minneapolis rapper Lizzo was owning the outdoor stage. The last time I saw Lizzo, she was opening for Har Mar Superstar at the Riot Room back in October. I loved seeing her, but I know that she was exhausted for that gig, and hints of that slipped out in her too-short set. This time, though, Lizzo was in charge and loving the moment. She’s a fierce MC, all confidence and swagger and with the mad vocal chops to back it up. She’s the kind of girl you want in your corner, your best bet in any kind of fight – like a rap battle, or maybe a Fight Club-style showdown. 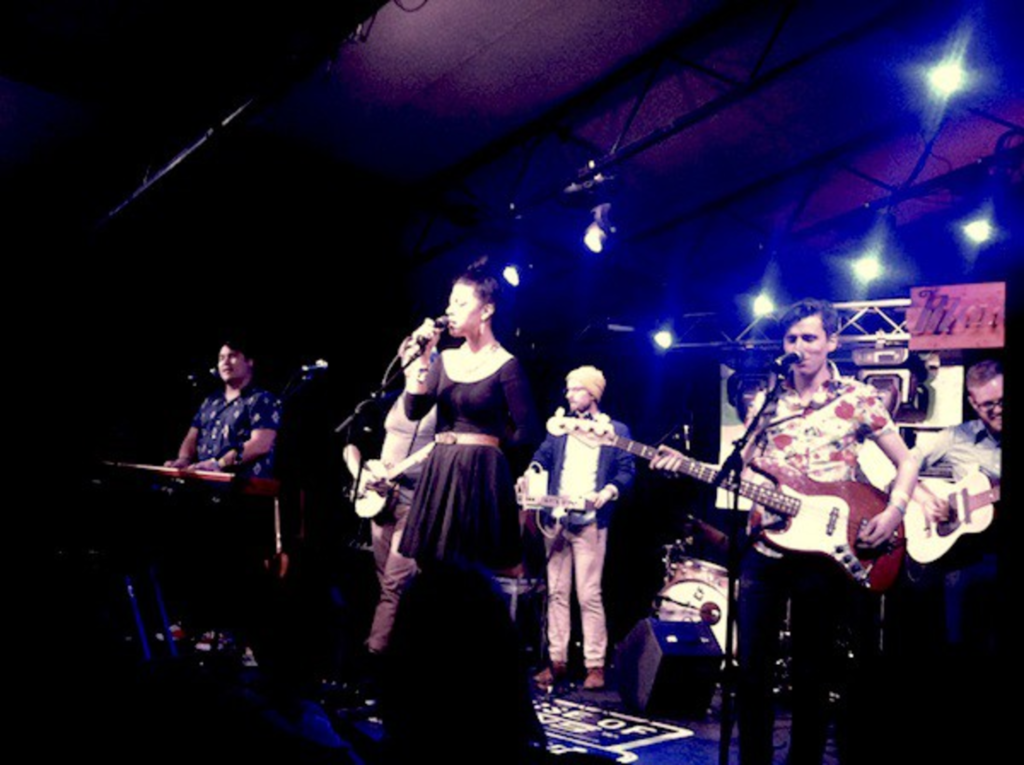 Later that evening, I hopped over to Mohawk to catch Phox, a seven-piece band from Baraboo, Wisconsin, of all places. Phox has recently signed to Brooklyn label Partisan Records, and before the band took the outdoor stage, I did a quick interview with lead singer Monica Martin and drummer Matt Holmen. (Read the interview here.) Offstage, Martin is a flurry of nerves, still unsure how to receive the attention she’s recently receiving as the husky-voiced woman fronting for a bunch of dudes. Onstage, though, those nerves were quelled – a shot of vodka might have helped – and Martin was bubbly and warm for Phox’s shimmering folk-pop set. She’s got a certain Lianne La Havas charm to her, with vocals that can be breathy, raspy or jazz-diva huge at the flip of a switch. 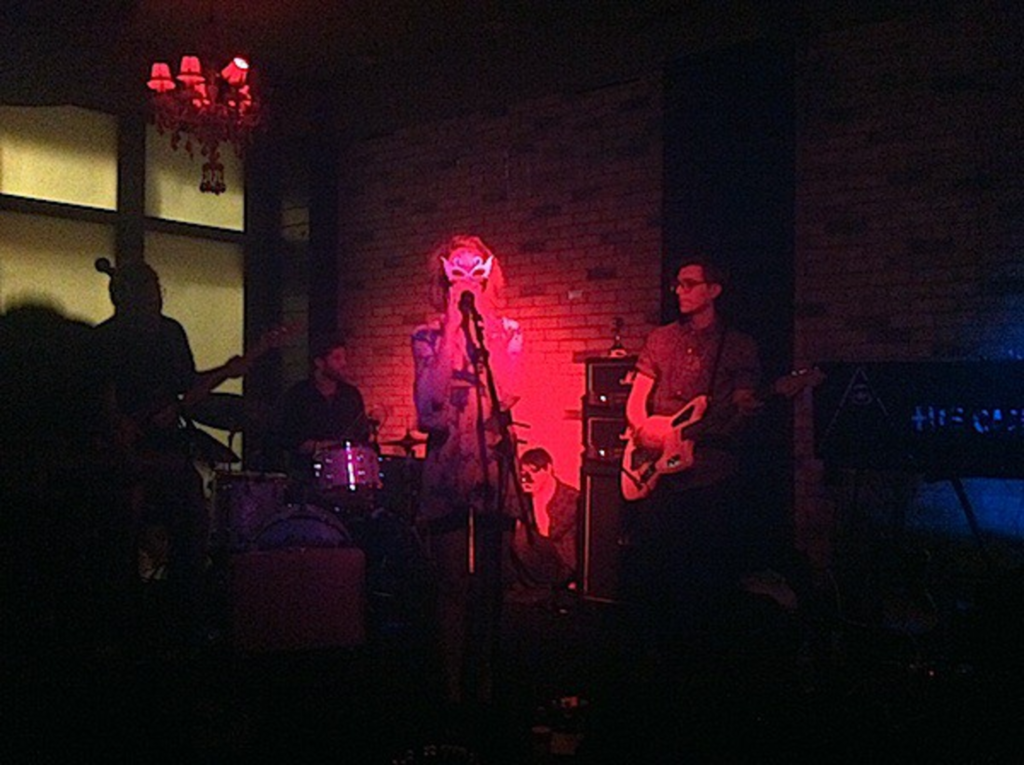 Far on the other side of downtown, I found myself in the backroom at Ten Oaks for Gramma’s Boyfriend, Haley Bonar’s punk-rock project. I’d seen Bonar the night before, performing her singer-songwriter stuff, which most know her for first and I am definitely a fan of. Gramma’s Boyfriend is the furthest possible thing from Bonar’s emotive, stunning self-titled work. It is loud, abrasive and absolutely fearless. Bonar screams, whoops and pushes her powerful voice to its breaking point, throwing her body around and dancing like she was possessed. Gramma’s Boyfriend is as legit as any other punk outfit playing, but knowing about Bonar’s other side and then really seeing her let loose makes for a jaw-dropping experience. 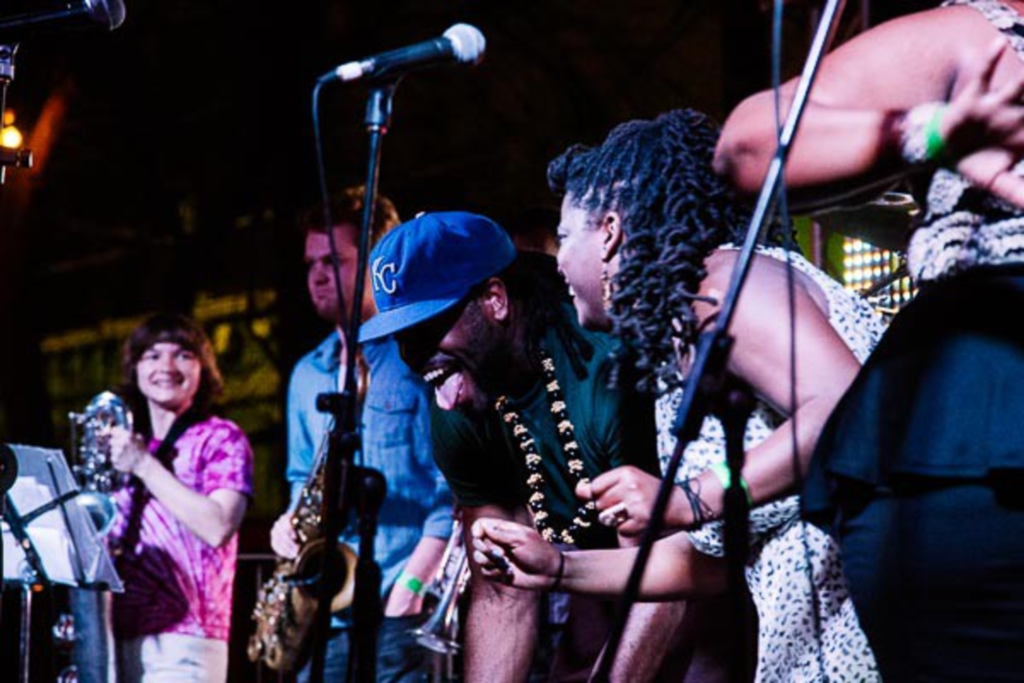 Somehow, I mustered the energy to drag myself back across town to Shangri-La for Hearts of Darkness‘ midnight set. Les Izmore, Rachel Christia, Erica Townshend and the other HoD members are a fail-proof way to end any night, and they were on-point for SXSW. Seeing all those creative kids crammed up onstage, having a joyful, funky time – that’s infectious, and the packed Shangri-La crowd was feeling it thoroughly. Though I missed a bunch of big names apparently bringing roofs down all over Austin, there didn’t seem to be a better choice band to close out my first SXSW experience.