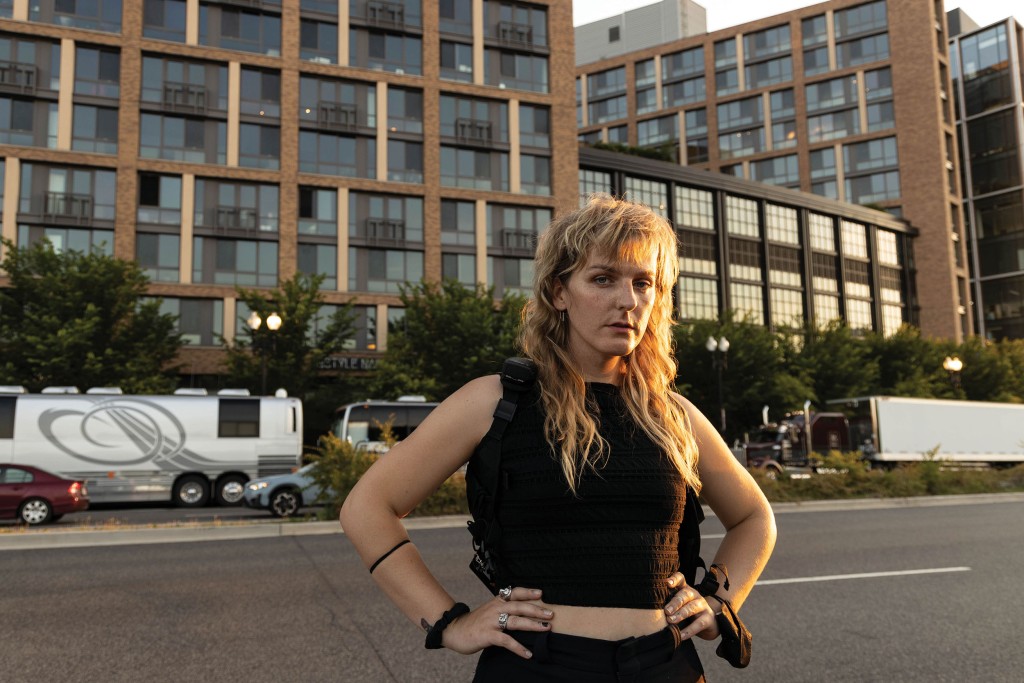 Imagine Phoebe Bridgers performing to a sold out crowd of screaming fans, shredding on her prized Danelectro ‘56 Baritone. Suddenly, there’s a crackle and a pop! as an amp blows. Who comes to the rescue? Kansas City’s own behind-the-scenes superhero, Ada Brumback.

A rockstar in her own right, Brumback has toured all over the U.S. with her own bands and while working with other professional musicians.

She joined local post-punk group Regret, the Informer as a drummer while she was still in art school and has played guitar for Chase the Horseman’s live band at venues such as recordBar and The Riot Room.

“I’ve been in a lot of situations where I’ve just learned all the songs on Spotify and flown in and joined the tour,” Brumback says.

If there’s one word to describe her, it’s versatile.

“It’s too much to say photographer, videographer, drummer, guitarist, lighting assistant, stage manager, tour manager, merch person, and 15 passenger van driver, you know what I mean?” she says. “I tell people sometimes that I want to be like the Swiss Army knife of people.”

Brumback even has a song named after her—“Ada” by The Greeting Committee, one of KC’s most beloved bands. She directed the accompanying music video and inspired the lyrics with her experience as a trans woman.

Although Brumback recently moved to LA, she was in KC for the May 31 Reunion tour date and spent two days resting on top of the local performance date. It made for a bittersweet experience.

“It was weird because we’re in this Covid lockdown where we’re not allowed to see anyone, or do anything, or go to public places. We’re limited to walking around outside the hotel or at the show,” Brumback says. “If we’re around any people that are not in our bubble, we have to wear masks. So, in KC we got a private session at Inner Space Yoga. It was the most beautiful place I’ve ever lived. It was so perfect. I left, and I touched my old apartment door, and then I kept going.”

Brumback spent her free time riding around on Bird scooters and showing her tour family around her favorite spots. After the show at Starlight, she was able to see her friends briefly.

“It was nuts to be there from the production standpoint,” she says. “I just never expected to be on the other side of that stage. And that was really cool. That felt like kind of a big deal to me. So, my mom was there, you know, and she was dancing, and clapping, and just really going hard on being excited about me. It felt cool to be like, ‘I’m here doing this thing. All my friends can see it.’”

At the time of this interview, Brumback is staying at Hotel X in Toronto as the guitar tech and backline manager of Bridgers’s Reunion tour. It’s her day off, but she’s still double-fisting two mini mugs of coffee. When room service knocks on her door, she orders more Nespresso, even though it makes her feel awkward to ask them for anything.

Her primary job on the tour is setting up and maintaining equipment. This can include tuning guitars, organizing equipment orders and manifests for international travel, and keeping inventory. 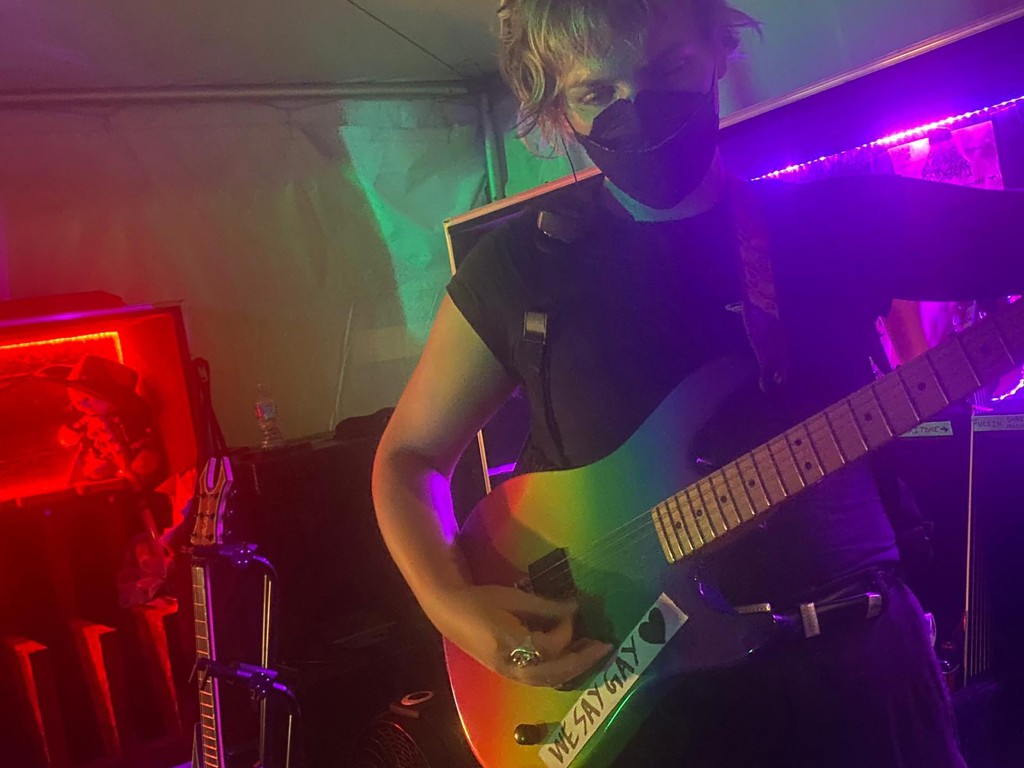 Life on tour isn’t especially glamorous. Brumback has a designated bunk on one of the three Reunion buses. She keeps a humidifier, three bags of clothes, and shoes at the foot of the bed. Her time on the road has taught her to pack light.

Still, it’s much comfier than where she started out.

Brumback found tour life exhilarating the first time around. Regret, the Informer traveled in a Hy-Vee catering van without any back seats or windows.

“We would sit on the floor in sleeping bags because it was so cold,” Brumback recalls. “Because there was no insulation, there was just sheet metal—like bare ass sheet metal. And we were broke, so we ate kidney beans, or whatever. Like, we were literally in Boston and went to the dollar store and bought all the canned vegetables. And then next door was an Asian market, so I got a bottle of Sriracha. We would, like, dump Sriracha in kidney beans, and that was a meal. A can of beans was a meal. We were broke as fuck, but living the dream.” 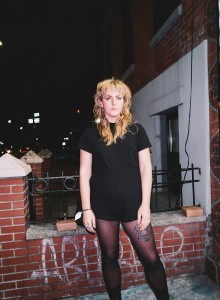 Brumback says she lost around 40 pounds on that tour. Now, she eats meals cooked by the team’s chef.

“It’s weird to have finally had something that’s recognizable as success,” Brumback says.

In 2021, her close friend Megan Mantia cashed in on a favor from Brumback. Mantia was working as the producer and production designer of Mitski’s “Love Me More” music video, and the budget was tight. Brumback worked as a behind-the-scenes photographer as a one-time freebie to help cut back on the team’s costs.

She took photos of everyone on the set, the day’s filming activities, and the crew’s individual experiences. A few months later, she was hired to do the same for the Yeah Yeah Yeahs—rockers she has admired for much of her life. Their 2004 MTV Movie Awards live performance of “Maps” was a turning point for her, and she can still recall much of the set design.

“I grew up in a quaint town called Wellsville, Kansas,” Brumback explains. “Wellsville is an hour south of Kansas City. It’s like 1,000 people. It’s pretty country. My parents separated when I was 13, and I moved to the suburbs [in Olathe]. I finished the end of middle school and all of high school there. It was the first time that I’d had cable television, which was nuts. It was so crazy that I could watch something that wasn’t public television. So, MTV was always on, and I remember sitting there and seeing this extremely beautiful performance.”

Working with the Yeah Yeah Yeahs was the first time Brumback felt that she had come full circle. While she says she doesn’t entirely understand the circumstances that brought her to this point, she attributes much of it to persistence and is enjoying the ride, despite how exhausting touring can be.

Brumback maintains a connection to KC by working full-time for Seen Merch throughout the year. When at home, she repairs guitars and works on photo and video projects. She rarely has a break but takes it all in stride.

Part of the reason for her tireless work is to fund her transition, which she began in 2015. The expense has posed additional challenges.

To help fundraise, Brumback raffled off a custom Gibson guitar that she stripped, painted, and finetuned. The winner was announced Jan. 1, 2022, and the guitar found its new home with the owner of Arizona Trading Company.

Brumback says she didn’t know her transition held significance for others until she was playing guitar with Potty Mouth in 2019 and was approached by a fan while plugging in her pedalboard.

“This girl came up to me and said, ‘Hey, my girlfriend thinks you’re really cool. Could she get a photo with you?’” Brumback says. “And I was like, ‘That’s weird. I’m just the hired guitarist. Like, I’m not even in this band. I’m not on the poster. Who am I?’ And I looked up and realized that her girlfriend was trans. She was so stoked to see me performing and representing who she was on stage.”

Amplify Lawrence, formerly Girls Rock Lawrence, is another avenue where Brumback has imparted her identity. She hosted beginner guitar workshops and supervised groups of femmes and marginalized gender identities aged 12-18 as they wrote an original song over a week and then performed on stage in a camp showcase. 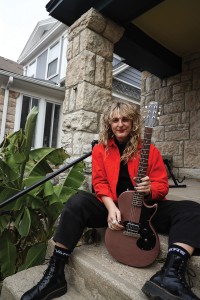 At the national Girls Rock Camp Alliance conference, she worked with committees on matters related to trans identity to ensure that the organization’s language is inclusive and creates a welcoming environment for all youth.

“As my visibility has increased, due to the achievements that I have made, or whatever, it just so happens to coincide with the fact that my identity intersects that,” Brumback says.

While Brumback is still getting used to her success, she’s already accumulating fans of her own. She has over 5,000 followers on her Instagram (@adabrumback), where she posts behind-the-scenes photos, her experiences as a trans woman, and personal snapshots from her life.

*Additional reporting for this story by Ellie Booton