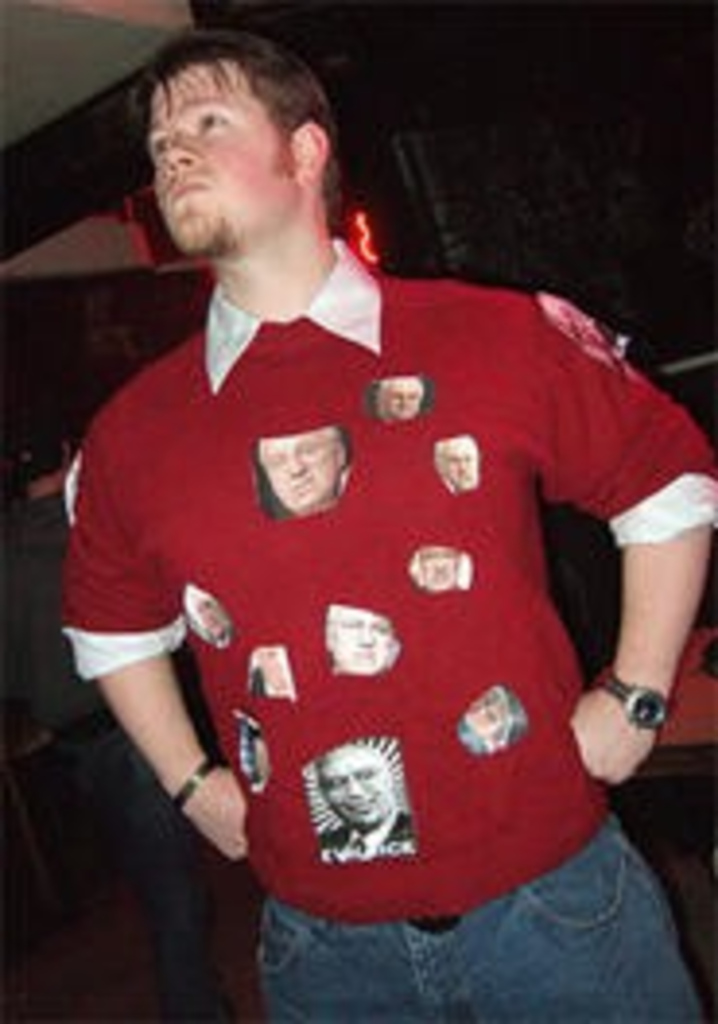 The Night Ranger needed to dress appropriately for the Ugly-Sweater Bash at Davey’s UptownSo she raided Night Ranger Mom’s closet and found a lovely red holiday number that depicted Dalmatian puppies frolicking in front of a fireplace. Adding to the “holy crap, my eyes!” factor were the poinsettia-shaped beads sticking up in bas-relief. Uh, sorry NR Mom, but your sweater now reeks of smoke and spilled stale beer.

The first-ever hideous-sweater shindig served as a fund-raiser for the Kansas City Roller Warriors. We’re all about theme parties, and we wanted to support the roller derby ladies, primarily because they kick ass. Less padding plus roller skates and a polished concrete track equals hardcore to us.

The bash, which featured four bands and cheap PBR, was a visual feast. According to skater Jade Lightning, who also doubled as door person and sweater inspector, standards for admittance included anything handmade, with depictions of farm animals, or with sequins or patterns. Yep, those categories were well-represented. The overall effect of the room was so bad that we thought 1980s-era Benetton had collided with a thrift shop and spawned an evil army of luridly colored fuzzy concoctions.

One of the first things we spotted was a whole lot of dick. The Cheney kind, that is. A guy had festooned his red sweater with a bunch of cut-out pictures of the vice president’s evil visage. “This isn’t a political statement,” said 28-year-old Joe, who had fashioned his garment with duct tape and downloaded photos. “It’s just a representation of ugly.”

We soon met a particularly fantastic sweater — and by fantastic, we mean fantastically tacky. Worn by 27-year-old Michael, this $4 thrift-store find showed a blue fish being fly-fished from a stream.

“Who have you lured in with that sweater, besides us?” we asked.

“Well, my girlfriend’s here. By the end of the night, I might lure her in,” he replied. He’s dating 26-year-old Sarah, who wore a turquoise heavy knit with bronze-colored sequins. She had bedazzled it and applied a flaming skate — the Roller Warriors’ logo — in sequins.

After getting drinks, we found our friend Tracey — aka Cherry Smash of the Dreadnought Dorothys, one of the teams that make up the Roller Warriors. Clad in a black-and-white top with lumpy shoulder pads and cryptic pseudo-Russian writing (“ROCK N,” with a backward N), she informed us that we had arrived just in time for the ugly-sweater contest. In the next room, a parade of awfulness competed for a blue ribbon, a small trophy and a shot. MCs Lois Payne and D’nouncer Duane Cunningham entertained the crowd with a duet of something that kind of resembled the Muppets’ “Manamana” (see video below). The spectacle of Cosbyness quickly ended when the audience cheered the loudest for a guy in a heavy yellow number that looked as if a harlequin had thrown up on it.

The winner, 26-year-old Justin, told us that he’d paid $5 at a thrift shop for a sweater with sequined clumps dotting the middle of a diamond pattern. “I almost didn’t buy it because it was way too … ” he trailed off, trying to come up with the right word. Unfortunately, we couldn’t help him out — after multiple screwdrivers, we had no poetry left in us. Justin had used his woolly thing of beauty to win another ugly-sweater party just a couple of weeks back. “It’s kind of like cheating, really,” he said, somewhat apologetically.

Another competitor, 29-year-old skater Dawna Destruction, didn’t seem too disappointed at her loss. Her sweater featured a bucolic farm scene, complete with black-and-white cows, giant sunflowers and cloudlike sheep. The kicker, though, were the fuzzy 3-D sheep buttons running down its front. She was chatting with her best friend, 33-year-old Kiki Yoasis, who had opted for a Roller Warriors baseball T-shirt. After admiring the sheep, we had to ask what it was like to get beaten up on the track.

“I’ve had two concussions, two black eyes and a torn rotator cuff,” Dawna said. Kiki has just been bruised. Later, 23-year-old Jade Lightning relayed a tale of hurtling into a spectator in a wheelchair during a bout in Wichita. “I hit the side of the chair,” she said. “We don’t discriminate who we fly into.”

We had to ask if hip-checking comes in handy in nonroller-derby activities, especially during that of the nocturnal persuasion, wink-wink, nudge-nudge. “Oh, definitely. Like when drinking at a bar, for sure,” she answered. Earlier that night, some guy had sprawled out across the bar, blocking access to the ordering process until some hip action wedged him out of the way. Another Warrior, 23-year-old Missile Toes, agreed. Some mosh-pitlike action erupted in the next room, and one guy got knocked into her. She gave him a bit of a shoulder check and bumped him back in. “I’m ready for it if it comes near me,” she said. “I learned to be stable.”

We headed toward the back of the main room, where one Warrior, 31-year-old Boobarella, sat at a table and offered to arm- or thumb-wrestle anyone for a buck. After our RA pinned her thumb, we figured it was time to head out.

The KC Roller Warriors start their third season on April 7 at Hale Arena. Bad sweaters are optional, but going is not. Don’t make us hip-check you.