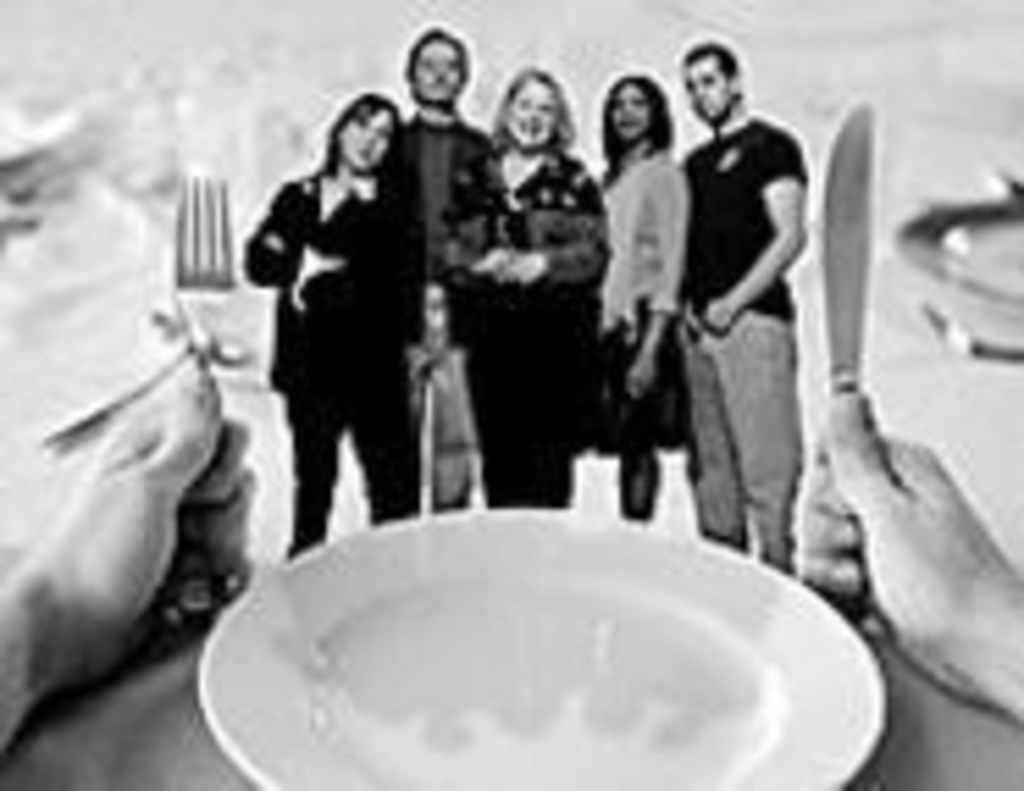 3/11-4/3
What would Martha Stewart do to deal with the fears and emotions stirred up by the trauma of September 11, 2001? We imagine she might throw a dinner party and invite Camille Paglia, Saddam Hussein, Martin Luther King Jr. and Tom Clancy to sort through things over haute cuisine. Playwrights Theresa Rebeck and Alexandra Gersten-Vassilaros serve the same simmering stew of wit, opinion and bias in Omnium Gatherum, their 2003 Humana Festival hit and 2004 Pulitzer Prize finalist. Trying to feed the hunger for understanding that has gnawed at many since 9/11, they’ve written rich, humor-laced dialogue for the fictional guests, including an unwavering feminist, an Arab critical of U.S. foreign policy, and a firefighter with an intimate connection to that fateful day. The diners devour not only each course but also each topic of discussion, including Star Trek, terrorism and infidelity.

It’s All in the Mix
Mike’s wants to sax you up.

ONGOING
The UMKC Jazz Mixers play from 6 to 9 p.m. every Thursday at Mike’s Tavern (5424 Troost). We’re not sure if they’re being graded on their performance, but we give them high marks. A quartet made up of students from the university’s Conservatory of Music, the Mixers groove their way through a number of jazz standards — and even a handful of originals — as bargoers sip beer and shed their daily frustrations. Their uncomplicated yet sophisticated interpretation of the music doesn’t require much active listening, and though they may not draw large crowds, the monotony of the day before the weekend seems much easier to endure when these guys are onstage. We also find it refreshing to see live jazz at Mike’s, a place known more for rock shows and DJs spinning funk and soul. Call 816-444-3399 for more information. — Todd Broockerd

Saul Good
The world’s most successful slam poet gets
a second go at The Granada.

SUN 3/13
At his best, slam-poetry idol Saul Williams fires off incantatory verse like Teflon-coated slugs, making self-proclaimed socially conscious rappers such as the Black-Eyed Peas look like runners-up in a third-grade limerick contest. And on his latest album, Williams chants over hip-hoppified industrial rock that fuels his message with urgency. Yet, disappointingly, in a solo spoken-word performance last year at The Granada (1020 Massachusetts in Lawrence, 785-838-9999) in support of the Mars Volta, Williams was more like a giggly Jay Leno than the black Walt Whitman of his generation. So this time around, we’re hoping that the presence of his backup band will keep him in fiery-prophet (rather than stoned-comedian) mode. — Jason Harper

FRI 3/11
Every St. Paddy’s, the Elders renew their title as Celt-rock patriarchs. But this year we’re giving the hardworking Kelihans the honor of our first drunken jig at the Elders Hoolie, Friday night at the Uptown Theater (3700 Broadway, 816-753-8665). The Kelihans might not have a huge following, but they’re tight, the fiddle player is hot, and the singer looks like Shane McGowan. Slainte! — Harper