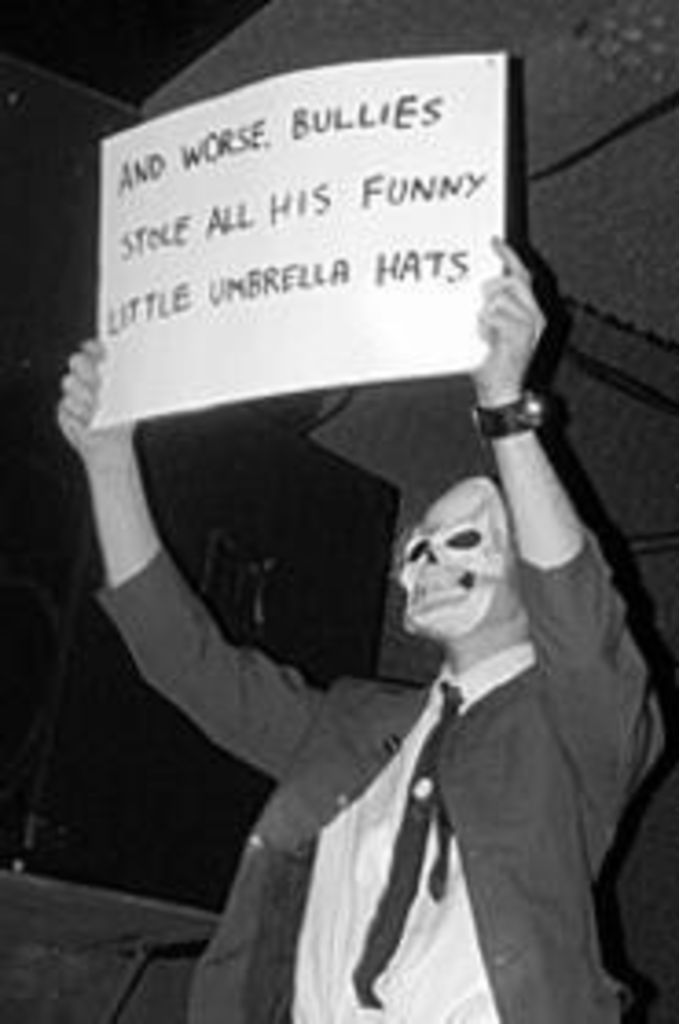 Adam “Superargo” Jeffers was having a tough night. Playing his first live show as a solo electronic artist, he had hauled his desktop computer to the venue, only to find that the sound wouldn’t translate from the hard drive to the stage. The drum tracks disappeared, and a buzzing noise swarmed over the songs. The slide projector, stocked with random oddities from his grandparents’ archives, stopped working early in the set, and soon after that the lights went out, shrouding him in complete darkness.

As nerve-racking as that experience was, watching a videotape of the concert was even more excruciating. Suffering through an awkward thirty-minute set that seemed to last at least twice that long, Jeffers had to face an unfortunate fact: His performance was painfully dull.

“That tape was basically the nail in the coffin,” Jeffers says. “I realized just how boring it was to watch somebody fuck with a computer. Watching it was like walking down the longest tunnel ever with no light anywhere. I mean, a guy with an acoustic guitar can silence a room, but a computer is so foreign as an instrument that people have no idea what’s going on up there, and it’s easy to lose interest. People can walk around the venue and listen, but in that case, why not just play a CD? If people pay to see me live, there should be something extra.”

Jeffers was prepared for his second gig two months later in July 2002. He’d shot film footage of a friend donning a skull mask and rolling through a fast-food drive-through. Skullface soon became a standard character in Superargo’s background videos, until Jeffers found himself without a functional projector in May 2003. That night, he invited Skullface to make an unprecedented live appearance; the funky-dancing Skeletor has been a fixture ever since.

An October gig at Balanca’s Pyro Room demonstrated the awesome power of a fully functional Superargo. The set opened with the crucial “Skullface finds his way to the venue” short, which depicts the character prowling nearby streets and adds a customized feel to every performance. The show also contained a story that used a robotic voice and closed-captioning cue cards to reveal the mysterious origins of Superargo. And it showcased Jeffers’ engaging instrumental compositions, which combine electronic rattles with robust rhythms and minimalist melodies.

Jeffers’ work hasn’t always been so accessible. As a preteen in Fredonia, Kansas, he pieced together sound collages using television and radio snippets, old comedy records, a Casio keyboard and an antiquated Atari 800 computer. Alas, there’s little chance that these early sonic scribbles will appear on a future Superargo basement-tapes collection.

“I don’t have any of that crap anymore,” Jeffers says. “Sound collage can be really good, but if you don’t have direction, there’s really no point. They were experiments, and most of mine failed miserably. It was punk-rock sound collage, short bursts of stupidity.”

Jeffers became inspired to revise his approach by the layered sounds of groups such as Compton’s Most Wanted.

“West Coast gangsta rap was a huge influence on the way my songs were written,” he says. “I’d been listening to movie soundtracks and the Beatles, and I never considered that I could take bits and pieces of music and structure cut-up compositions into a whole new valid piece of music. Admittedly, I don’t really do that anymore, but that’s how those early songs started out.”

Superargo first emerged in 1995 as a collaborative effort between Jeffers and guitarist Mike Mitchell. The pair released a ten-song album called Radio Has a Future, which Jeffers now dismisses as “really dumb space rock.” An EP called The Plex Ode, which blended acoustic guitars with electronic elements in a manner similar to current alt-radio favorites Postal Service, followed in 1998. After that, Mitchell left the project. “Mike lost interest after electronic production became paramount to the writing process,” Jeffers explains.

Rudimentary as these early efforts were, they established the blueprint for this year’s enchanting self-titled Superargo release. Though he has strayed from standard song structure, Jeffers still makes his songs as catchy as sing-along pop ditties. The underlying hooks remain prominent, no matter how many overlapping clangs and squiggles enter the mix.

With hummable hooks and dance-dynamite beats, Superargo defies stiff, esoteric performance-art stereotypes. Skullface isn’t an existentially challenging statement on the nature of mortality; he’s just Skullface, an amusing cohort, like a hip-hop hype man, only funnier. And though Jeffers’ tunes might subtly communicate emotions — Superargo is a breakup record — he doesn’t hold listeners captive to the songs’ origins.

“A lot of performance art is concept over substance,” Jeffers says. “It’s important that any art be at least a little bit entertaining, or else it won’t reach past you and maybe a few friends. I hope people understand that none of this is to be taken seriously. The whole show is completely ridiculous, and that’s the point.”

Helping to reinforce that point is Superargo’s crowd-pleasing cover of the Olsen Twins’ “Gimme Pizza,” a baffling number in which the then-tweens pile their pie with guacamole, meatballs, whip cream pouring like waterfalls, salsa, ice cream and chicken tongue, finally drawing the line by requesting that the chef hold the eyeballs. While the tune plays, Jeffers and Skullface execute a choreographed dance more absurd than anything ever concocted at boy-band camp. The routine represents the culmination of Superargo’s evolution from dude-with-laptop tedium to a best-live-show-in-town zenith. And, Jeffers promises, the best is yet to come.

“It can only go up from ‘Gimme Pizza,'” he says. “We can only grow more respected as artists from there.”