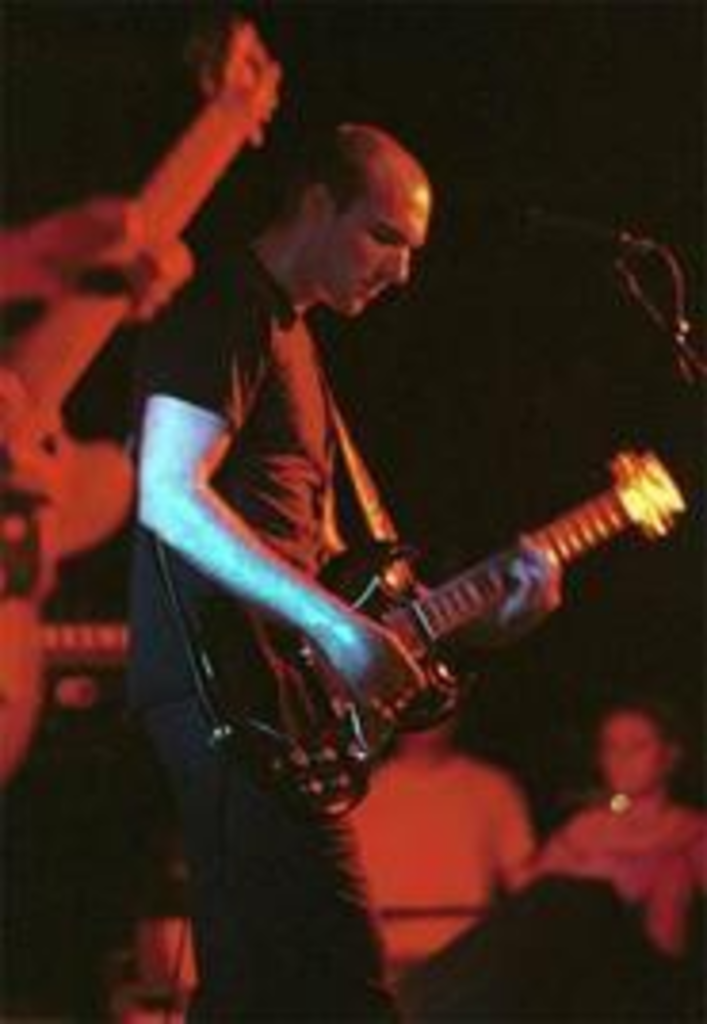 Taking the stage in front of the eerily devoted cult that attends Sunny Day Real Estate concerts is no easy task for an opening act. These fickle fans, who have gathered close to the stage more to reserve their spots for the headliners’ set than because of any affection for the band currently playing, waits patiently (if the group is lucky) in hopes that the time will pass quickly. San Diego’s No Knife, the chosen sidekick for this tour, provided the ideal complement for SDRE, although the crowd response might not have indicated as much.

Perky while keeping a realistically jaded foot planted firmly on the ground, No Knife blends the Police’s new wave, the agitated guitar sounds of newer Fugazi, and the rhythmic sensibilities of mid-’70s Yes. Running through a fast-paced 10-song, 45-minute set, No Knife gave the oblivious audience something to chew on, showcasing a well-selected array of material from its three albums and a few as-yet-unreleased gems. The band is capable of writing swelling, oceanic tidal waves (the dark and churning “The Spy”) as well as hyperactive bursts of staccato chaos wrapped up in a blanket of soothing melody (the undeniable hook of “Secret Handshake”). While the group didn’t manage to lead the crowd, which was betrothed to Sunny Day Real Estate, into lo-fi infidelity, No Knife did avoid the heckling that clouded the sets by the past two Sunny Day openers.

Before No Knife had even finished the last note of “Mission Control,” Sunny Day’s frantic followers surged forward to get as close as possible to their modern-day emo-core messiahs, who have inspired thousands of bands of which no one has ever heard. Imagine the excitement and idol worship that emanates from an arena full of Cure fans concentrated into a room of 400 kids. Adding to the intrigue is the band’s Behind the Music-ready story, which includes breakups, spiritual awakenings, solo projects, side projects, and constant instability. Yet for all the religious reverence that Sunny Day inspires, its performances are notoriously hit-and-miss.

This concert was no exception. Playing a set that drew heavily from its new epic arena-rock inspired LP, The Rising Tide, the band seemed at once friendly and coldly calculated. A group once known for its cathartic, sweaty, and spastic live shows has weathered breakups, lineup changes, and label switches, and now its world-weary members exude the “calm, cool, and collected” demeanor of professional musicians. The original band members (accompanied by a keyboardist/guitarist and a bass player) still do their parts, with guitarist Dan Hoerner giddily falling about the stage, drummer William Goldsmith relentlessly bashing his drum kit, and singer Jeremy Enigk wailing as if his skull would jump right out of his agape mouth. However, all of this seems a bit tame compared with the undiluted fire of its early shows.

The current album has some wonderful moments on it, but most of it either falls flat or ends up sounding like a SDRE cover band, as the group borrows heavily from its own bag of previously original tricks. While the band does pump some intensity and vigor into the live renditions of its songs, the epic nature of its newer tunes too often becomes monotonous. Sunny Day did play “47” and “In Circles” from its first album, Diary, but it didn’t sample enough from its impressive back catalog to counteract the stale nature of its recent material. Its fans might label any such criticism as heresy, but on this night, No Knife was sharper.