Suneaters are back with a brand-new album and music video, and you can stream both right here, right now 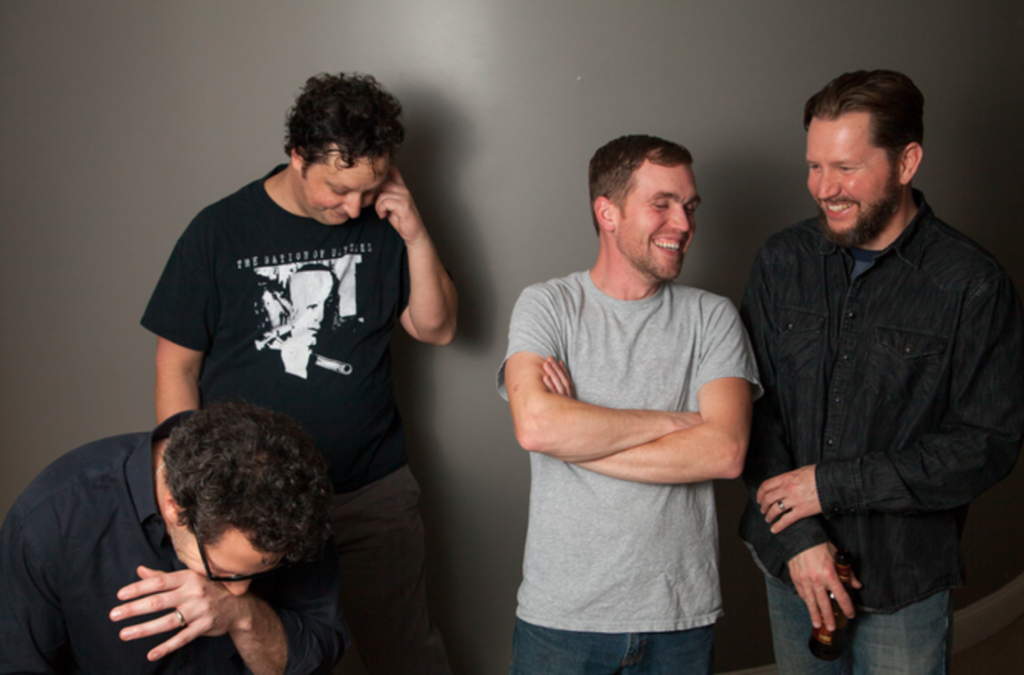 It’s been a few years since we’ve heard from local psych-rock weirdos Suneaters. The band – formed by Lotuspool Records co-founder Chris Garibaldi and Scott Hartley – stepped out of the spotlight after the release of 2012’s Suneaters XIII, an off-shoot record that they didn’t really over-hype. Now, we finally know what the four-piece has been up to: The group’s latest full-length, Suneaters II: Loving Relationship, is due out tomorrow, Tuesday, June 2, via Lotuspool.

We’ve got the exclusive album stream a day ahead of schedule, though, along with the premiere of Suneaters’ delightfully bizarre music video for “Hai Karate.” We chatted with Garibaldi and Hartley about the songs on Loving Relationship and the drive behind the band’s eccentricity.

The Pitch: You last put out an album in 2011, called One, so Suneaters II comes after kind of a time lapse. Fill me in a little bit on the band has been up to.

Garibaldi: Recently, the last couple years, we stopped playing shows because they were impeding our ability to put out more records. We have a goal to put out 13 records [as a band], and we actually put out Suneaters XVIII in 2012 – that was a soundtrack for my brother in law’s film, Charlie 13. We then played a couple Lotuspool showcases up in Chicago [around that time].

We try to play unique local shows. But we felt like that was slowing down the process and focused on recording Suneaters II. We finished the album six or seven months ago, but just in the process of trying to market it and release it, it took us until tomorrow to actually get the album out.

Tell me a little bit about the album. There’s such a weird collection of songs on here: “Hey Bros!” is hilarious, “Help” is kind of beautiful, “Walk Around” has a really tense energy. I don’t even know what “Bodrum” means.

Garibaldi: [Laughs] That’s a Turkish folk song by a band named MFÖ. It’s a song about a guy who goes on vacation for a month, as they do in Turkey, and he goes to this beautiful bay town called Bodrum, and he meets a woman and falls in love with her, and he feels like that’s the answer to his life, and then when he goes back to his day job, it’s as if that woman never existed and the whole experience was just a dream. So it’s this weird, quirky thing.

The thing you’re pointing out – and I’m really happy to hear you talk about the album in those terms – is that Scott and I have always felt that weird is great, weird is good, confusing the listener is a great idea. And we truly believe in that. And “Bodrum” is just another weird thing, people are kind of thrown by this Turkish love song.

Garibaldi: I think that a lot of people refuse to acknowledge love songs, or just think they’re hokey and corny and there’s no intention to them. I think we tried to have a different angle. Love is not that easy. There’s anger and friendship and long distance love. There’s so many different directions that love can go that it’s not as simple as writing a Valentine’s song for your lover.

I love the video for “Hai Karate.” It looks like you guys had such a blast making it. What can you tell me about it?

Garibaldi: Scott floated this idea by me a couple years ago, he was like we should do an album on the Sybaris Hotel.

Garibaldi: Yes, it’s a hotel chain that was started in Chicago by this this married couple, and it’s kind of a fantasy hotel for married couples to get away to and just really enjoy a sensual experience with hot tubs and etcetera. It’s a crazy, weird place.

And we’re obsessive people, and we started doing a lot of research around the place and we found the owner, Ken Knudson, was a 5th degree karate black belt who knew Chuck Norris and Bruce Lee. So we’re writing this album of ironic love songs that are inspired by this couples hotel, and we found this story about the owner being this karate expert who, at one point, thwarted the robbery of his boat by kicking in the windshield of the people who were trying to steal it. Then it turns out he actually thwarted an FBI sting, because the FBI were actually monitoring these guys who were stealing his boat. So it’s just a really bizarre side story.

So “Hai Karate” is essentially the story of Ken beating up the guys who took his boat, tucked into our album of songs, because it was thematically connected to the Sybaris Hotel.

You guys mentioned that you had a goal of releasing 13 albums. That sounds ambitious.

Garibaldi: Scott and I are not afraid of ambition, or odd ambition. One of the goals of this record is to do a video for every song on record. If you haven’t seen them, you should check them out – I think they’re pretty funny, but they certainly don’t help to explain [our music]. If anything, they’ll further confuse you, but in a good way.

But to give you some background: When my brother-in-law gave us the offer to do the soundtrack for his film, Charlie 13, and PBS – who was sponsoring the film – told us we weren’t allowed to do an official soundtrack for the film, but we were allowed to release the songs under a different moniker. We released it under the name Suneaters XIII, and they were songs that were used in the movie.

At that point, we realized that Scott – who had turned out those songs in such a short period of time – and he’s got so much other stuff that he does that sometimes works with what we’re trying to do with the main albums but sometimes it hits left field, and something he just needs to get out of his system. So we’ve realized that we can produce a counter album for every primary album that we release. So Suneaters I and Suneaters II and Suneaters III, which we’re currently writing with the band, are full albums, but then we also have Suneaters XII and XI in the can, ready to be released. Scott did those, and I made minor contributions, but they’re ready to go and they’re really interesting, odd collections of songs. And when we get to seven albums, we’ll stop – we’ve kind of given ourselves a finite amount of time to when this band will end.

Hartley: It’s more than me being prolific, though, it’s me being really ADHD and creating these songs and turning them over the Chris. It’s very much two dudes in a kitchen, cooking up something no one else can really get.

Be on the lookout for a local show with Suneaters and a few other Lotuspool labelmates in August. For more on Suneaters, go here.