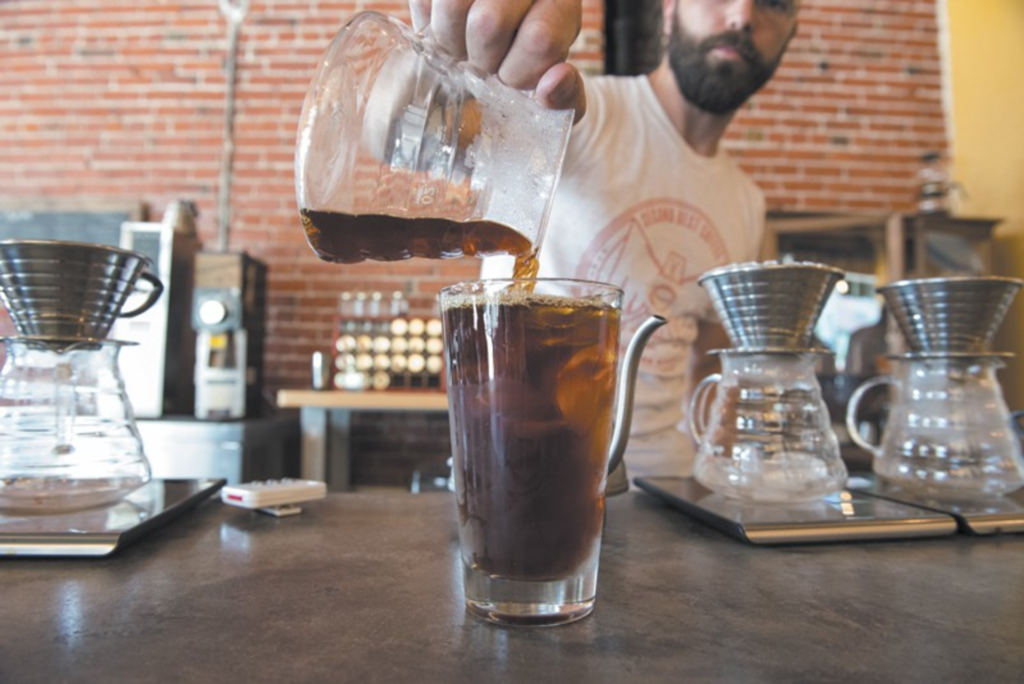 There is no way to put this nicely: Anyone who pours hot coffee over a glass of ice should be smacked upside the head with a big bag of beans. The resulting beverage is bitter and watery. Adding milk just makes it worse.

But lately, it has been too damn hot to order scalding liquid in a mug, so we went looking for iced coffee done right. Here are five that are just as delicious cold as the stuff you drink at 160 degrees.

I stopped by the Roasterie on a Saturday, when the popular Brookside café was packed — as usual. The barista seemed like she needed a nap or an espresso — perhaps both, with a hug in the middle. I ordered a toddy.

Cream-o-meter: I love everything from the Roasterie, but this day the normally nutty, refreshing toddy was somewhat bitter. I added a splash of cream and righted my drink.

The barista at Quay Coffee wore a glorious handlebar mustache that fit right in alongside the shop’s elegant wood espresso bar and old-timey bank vault, which displays the coffee mugs and other merchandise for sale here.

Mr. Mustache happily explained Quay’s Kyoto-style brew process, which involves a tower of three glass beakers connected by narrow tubes. (Cold water goes on top, and coffee grounds in the middle; drop by drop, gravity does the rest.) He said the coffee had a “liqueur-ish mouthfeel.” Perfect.

Cream-o-meter: I did not even consider putting cream in this beverage. The coffee was smooth and impossibly refreshing. Quay’s may be my new favorite iced coffee.

Crows Coffee opened in July, returning to this neighborhood the lifesaving nectar of the gods that had been missing since Muddy’s left, more than three years ago. The new shop’s offerings, more sophisticated than the menu of its predecessor, include a delightful toddy. Made by steeping coarse-ground beans in cool water for a half-day or longer, the toddy is sweeter and less acidic than hot coffee.

Cream-o-meter: The coffee was so smooth and easy to drink that adding cream would have felt sinful. “I feel like it’s extra good today,” the barista said.

Because of its no-nonsense approach to caffeine delivery, Oddly Correct can be somewhat intimidating. Flavored lattes? Not here. And the shop doesn’t offer cream. But there’s good reason for this: The coffee is excellent, like art that would be defiled if you tried to augment it.

The barista suggested that I try the shop’s Hop Toddy, a cold brew flavored with hop tea that takes multiple days to extract. Wait, you mean there’s coffee that tastes like beer? Yes, please.

Cream-o-meter: The Hop Toddy comes in a brown glass bottle. The one I tried had a pleasantly crisp flavor. It was so good that I wanted to high-five myself for drinking it. I went back the next day and got another. Bonus: I’m pretty sure the Hop Toddy contains most of the world’s supply of caffeine.

The cold brew at Second Best, Waldo’s newest neighborhood hangout, is also made using the Kyoto method. “It looks like a science experiment,” I told the barista, noting that the tube leading to the bottom beaker resembled a curly straw.

“The swirly part isn’t related to anything,” he told me. “It just looks cool.” Second Best is that kind of place.

Cream-o-meter: The coffee I drank here was smooth and rich, with a hint of cocoa. No cream required — just a refill.