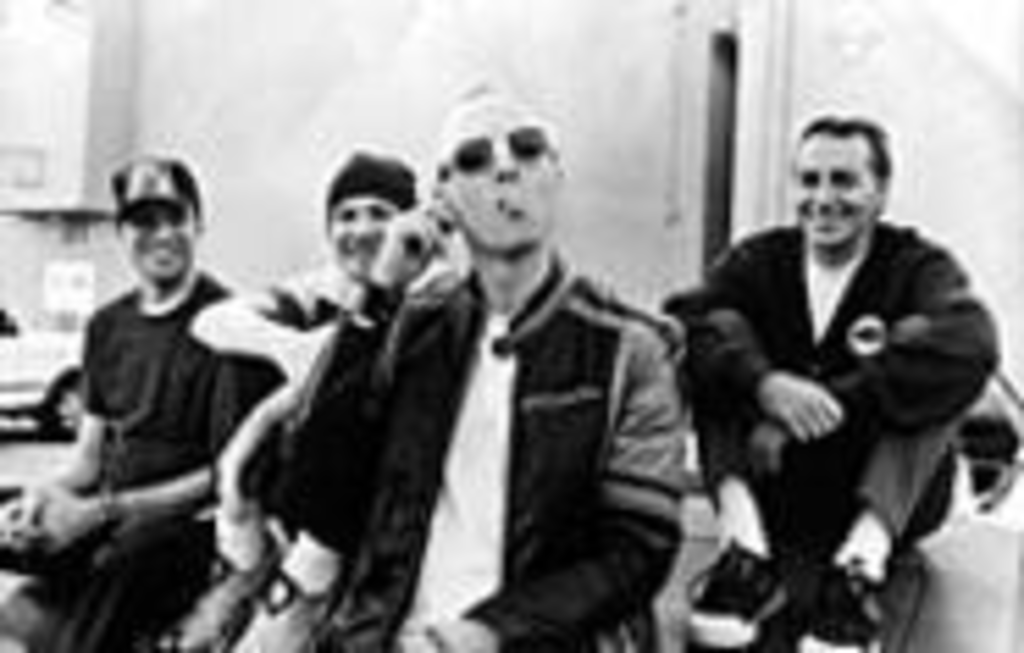 Joe Escalante, head of Kung Fu Records, remembers the first time he spotted the Kansas City/Lawrence-based quartet mi6’s demo lying on his wife’s desk. It made an instant impression, albeit not one the band might prefer. “I said, ‘That looks kinda funny — I bet it sucks. We should throw it away right now,'” Escalante recalls. “My wife came into my office later and said, ‘You know that one you were making fun of? It’s pretty good. You should listen to it.’ I listened to them and said, ‘This is amazing. How could this happen? How could they come from The Get Up Kids’ land and play music that must be the most uncool style of music in Lawrence right now?'”

Escalante promptly flew into town, caught a show and a rehearsal, and signed the group to his label. It’s a standard story these days: fun-loving punk group attracts a hometown following, packages its material to independent labels, catches someone’s ear and gets a deal. But in the early ’80s, when Escalante’s band The Vandals released such witty melodic nuggets as “Anarchy Burger,” “Wanna Be Manor” and “Urban Struggle,” underground groups had no such hope of making a breakthrough. Today, with Blink-182 having cleared the path for lighthearted guitar pop played by bad-boy types, a group shaped like the early Vandals — young, photogenic, witty, rebellious — might incite a major-label feeding frenzy. Instead, the original band fizzled out after a few seminal releases and a pivotal cameo in Wayne’s World director Penelope Scheeris’ tragicomic Suburbia.

“We got into a style of music where there was no hope for any of that kind of success, so we never tried,” Escalante says. “Today, there is hope for that kind of success, so the bands have to keep it at least in the back of their minds, even if they’re really punk. If you make a song like this or play a bunch of free radio shows, you could be huge. Today, it’s hard to tell who the real punk kids are and who are the kids who like punk but are really trying to become rock stars.”

When The Vandals resurfaced in the early ’90s, Escalante, formerly the band’s drummer, manned the bass as the initial lineup’s only holdover. Joining him were flamboyant guitarist Warren Fitzgerald, late of Oingo Boingo; Dave Quackenbush, a vocalist with a smug, talk-show-host-style delivery; and Josh Freese, an amazingly talented drummer who’s also recorded with Chris Cornell, Devo, Guns n’ Roses and dozens more. After testing the waters with Fear of a Punk Planet, a disc best known for a thrashy send-up of Grease‘s “Summer Lovin’,” The Vandals’ revamped squad assailed the work of its predecessors, more than doubling the already swift tempos of the band’s standards on the live disc Sweatin’ to the Oldies. Fitzgerald showcases his improv comedy skills on that disc, and even during abbreviated Warped Tour sets, he’ll riff for a good five minutes over a muted rhythm-section backdrop. (Three years ago in Lawrence, he transformed his shorts into a diaper-style thong, explaining, “I’m putting the ass in Kans-ass.”) However, old-school fans won’t hear a set list filled with early gems on this year’s Warped Tour. And they have only a rowdy segment of their own subsect to blame.

“Some people would come to our shows that wouldn’t buy any of our new stuff and weren’t interested in it,” Escalante explains. “If you’re a musician, you’re much more excited and inspired by an audience that cares about your newer music. When you see a guy who’s forty years old with a mohawk and a moustache punching kids in the slam pit, yelling ‘Pat Brown! Pat Brown!’ [the early Vandals’ signature song], you go, ‘Hey, I’ve got an idea, let’s not play the song that guy’s asking for, and maybe he’ll go away.'”

The newer Vandals played no part in creating those early tunes, which would seem to make it easier to eliminate the songs from consideration, but Escalante says he too feels no real attachment to the discarded material. “Distancing is an understatement,” he says. “We’re trying to build a giant wall in addition to the distancing. The stuff that we write now is a lot better than 99 percent of the old stuff, but the old stuff has memories attached to it for some people, which isn’t our problem.”

Under new membership, The Vandals underwent a massive stylistic change, rendering fruitless any real comparison of its output from the different time periods. The band’s early songs were vaguely melodic without harmonies or knockout hooks, embodying the essence of early West Coast punk. When the band resurfaced, The Vandals had injected a curious dose of country into their formula, weaving Western-style guitar lines over Freese’s hyperspeed bluegrass drumbeats to create an instantly recognizable bumpkin-punk hybrid. (The group released a straight country album titled Slippery When Ill in 1988. Out of print for several years, it reappeared on Kung Fu bearing the new title The Vandals Play Really Bad Original Country Tunes in 1999.)

The group’s wit remained constant, although its targets grew more specific. Early numbers poked fun at wanna-be cowboys and eccentric pedophile photographers — esoteric subjects to be sure, but no proper names were used. By contrast, later works included “N.I.M.B.Y.,” the amusing fictional tale about how concerned citizens rallied to keep Saturday Night Live vet and “Hall and Oates reject” G.E. Smith from moving into their neighborhood, and “Aging Orange,” a viciously funny song directed at the band Agent Orange, which accused The Offspring of swiping one of its riffs. (The Offspring’s Dexter Holland co-owns Nitro Records, The Vandals’ current home). Recent favorites include “My Girlfriend’s Dead,” in which Quackenbush claims his ex passed on from “leukemia, or sometimes bulimia” to avoid talking about their breakup, and last year’s “The New You,” in which he laments, Whatever happened to the girl I knew/She was just like you, but way more into me.

The Vandals also veer to the other side of the emotional spectrum, pondering the grim prospect of human achievement’s nonpermanence on deceptively perky tunes such as “It’s a Fact” and “Flowers Are Pretty.” There was a caveman who did some amazing things/but nobody here gives a fuck, Fitzgerald writes in the latter tune. But rather than revealing that these jesters have a philosophical underbelly, such sentiments are, Escalante assures, part of the joke.

“That comes from our brushes with gothic people along the way,” he says. “Doom-and-gloom kids with absolutely no problems in the world compared to other times and places. Still, they think the world is going to end and nothing’s worth it. We think that’s kind of funny, so we just write about it and join in, not very seriously.”

The group’s inability to take much of anything seriously has resulted in criticism from the punk factions who maintain that underground songs should unanimously deliver a socially conscious message. “We get that all the time,” Escalante admits. His standard response: “That’s what the hippie movement was for. It’s still there. You can join it.

“People latch onto punk rock because there’s always a crowd,” he adds. “There’s always a high distribution for a punk fanzine, but if you put out a hippie fanzine, no one’s going to buy it. And if you do a hippie concert or a junior underground Limp Bizkit concert, no one’s going to go. They want either mainstream superstar Limp Bizkit or no Limp Bizkit. So the new groups end up on the Warped Tour looking for an audience. Two years ago, Limp Bizkit was there, and they don’t have anything to do with punk rock. I watched them every day at 12:15 because it was so ridiculous.”

There’s no obvious impostor on the 2001 Warped Tour lineup to rival Limp Bizkit in 1998 or Papa Roach last year, but groups such as Fenix TX and Good Charlotte represent a questionable breed of punk band — “underground” acts that started with real hope of becoming commercially successful. “That’s the biggest thing to look for when signing a new band,” Escalante says. “‘What kind of punk band is this?’ The Goldfingers of the world — total opportunists — there’s many of those now. The last real punk band to break into this world is [Warped Tour-mate] Sum 41. They’ve been around, they’ve got the right attitude, they’re very good at what they do, and they’re getting mainstream success. I think that’s the last one. There will be no more.”

Certainly, though, as the talent scout for Kung Fu, Escalante hopes this prediction proves false. In bands such as mi6, groups bold enough to play a style of music that differs from the region’s most popular sound and goofy enough to title an album Alcoholiday, he sees a reflection of his early Vandals. The climate has certainly become more punk-friendly since the era depicted in Suburbia — see Hot Topic, the Warped Tour, the co-opting of punk slang and fashion by countless corporate campaigns — but the music remains, as Escalante once dubbed it, “fast music written by guys with short hair.” The stakes are just higher now, with platinum success a remote but real possibility. Escalante considers The Offspring and Green Day, acts that spent years recording for indie labels and playing tiny clubs, to be real punks who beat lottery-style odds. He’s resigned to the fact that The Vandals aren’t going to hit the jackpot, but with mi6 and its Kung Fu ilk, Escalante can still dream.