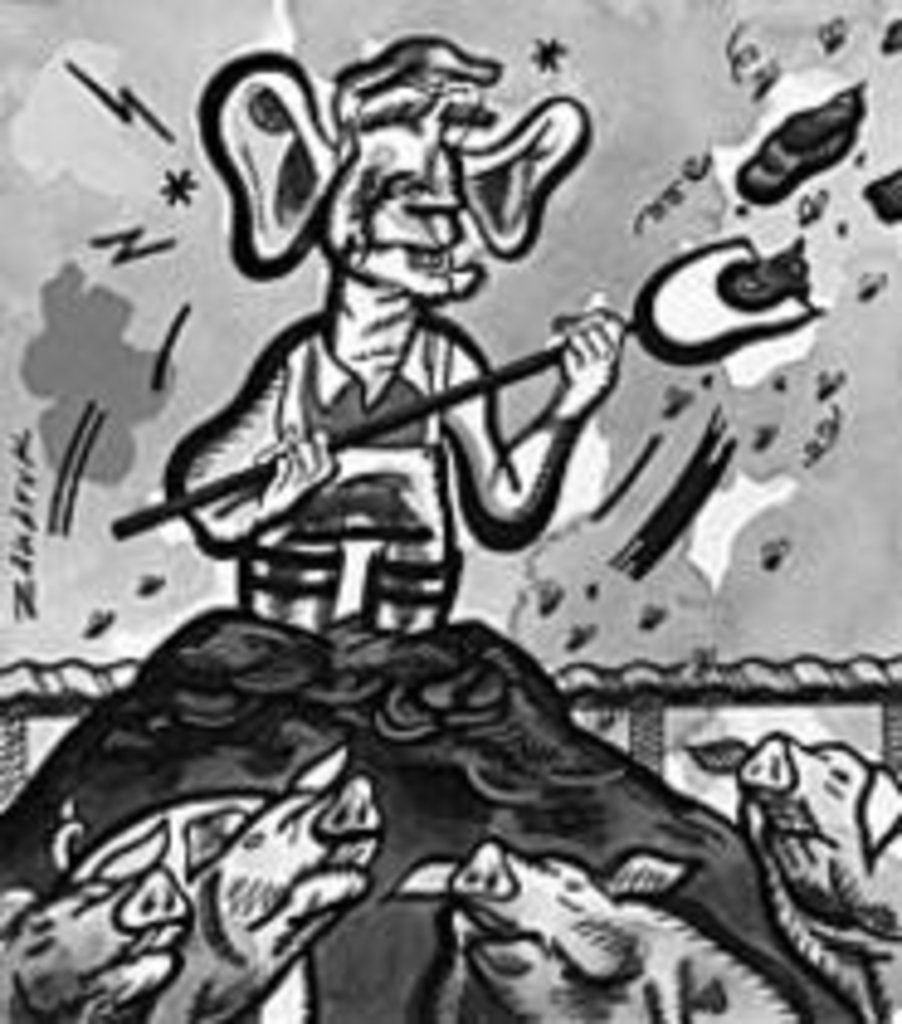 Air Force One sat on the runway at the downtown airport, and we sat in traffic stopped on the Broadway Extension.

The gigantic plane looked all peaceful and quiet in the Labor Day sunset, but on the highway no one was going anywhere. One guy got out of his car and climbed up on the concrete divider. We rolled down our windows in time to hear some older lady yell “George W. Bush is in town.”

From the tone of her voice, it was impossible to tell whether she was happy about it. She sounded oddly impassive — like a Missourian besieged by the endless campaign summer and, after nine presidential visits since the first of the year, entirely unimpressed by the sight of his plane on her hometown runway.

I’d been out of town, so I’d missed the e-mails from Bush-Cheney ’04 alerting me to the president’s visit. The sight of Air Force One was my welcome home from a long, peaceful weekend far away from my battleground state.

As it turned out, though, I wouldn’t need press credentials to hear the president’s speeches the next day. By 11:17 on Tuesday morning, Bush-Cheney ’04 had e-mailed a transcript of the president’s 8:30 a.m. remarks — complete with audience responses — to an invited audience at Lee’s Summit High School.

Most Kansas Citians probably only read about it in The Kansas City Star or caught a few seconds on the local TV news or heard the sound bite of the day picked up by the cable networks. (“My opponent … woke up yesterday morning with yet another new position. And this one is not even his own. It is that of his one-time rival, Howard Dean.”) But it’s the Pitch‘s responsibility to let readers feel the full effect of the experience themselves.

To wit, some crucial exerpts:

I’m going to give you some reasons to put me back in, but perhaps the most important one of all is so that Laura has four more years as the First Lady. (Applause) Which is an endearing aw-shucksy crowd-warmer, but c’mon. The most important reason to re-elect Bush is so his freakin’ wife can stay in the White House? Even Bush couldn’t possibly believe this, so from the very beginning he was lying.

Madame Mayor is with us today, Mayor Karen Messerli. I appreciate her coming. Madame Mayor, I’m honored you’re here. Thanks for taking time to be here today. Appreciate your support. Fill the potholes. (Laughter)

At 11:19 a.m., while the president was cracking pothole jokes, another e-mail arrived at the Pitch. This one clearly wasn’t from Bush-Cheney ’04. Its subject line: “34 Killed, Including an American in Sadr City.”

See, it’s really important in this country to vote. I want the high school kids who are here to understand, if you live in a free country, I believe you need to vote. (Applause)

Lee’s Summit High School spokeswoman Janice Phelan tells the Pitch that around a quarter of this year’s senior class of approximately 600 students will be 18 by November — and hey, 150 votes for George Bush just might make the difference in Missouri. Nonetheless, 200 angry suburbanites immediately sent the school board a letter wondering why their school had been hijacked for a Republican pep rally and demanding equal time for John Kerry.

And when you register people to vote, remember that example Zell Miller set the other night.

Would that be the one when the lunatic senator from Georgia furiously told MSNBC’s Chris Matthews: “I wish we lived in the day when you could challenge a person to a duel”?

You know, I like to say this economy is strong and getting stronger.

He likes to say that, but saying something doesn’t make it true, no matter how many times Bush repeats it.

If America shows weakness or uncertainty in this decade, the world will drift toward tragedy.

So, kids, voting for John Kerry expresses uncertainty. This is only a kinder, gentler way of saying what Dick Cheney said up in Des Moines the same day, which amounted to: A vote for John Kerry will get you killed by terrorists.

The Bushit at Lee’s Summit continued, but the president’s friendly audience ate it up.

[John Kerry says] Oh, don’t worry, we’ll tax the rich. Well, that’s why the rich hire accountants and lawyers. They dodge, you pay, but we’re not going to let him tax you, because we’re going to win this election in November. (Applause)

Huh? I think that what he’s saying is, it’s OK for his rich pals — the haves and the have-mores whom he likes to call his base — to avoid paying their taxes.

We stand for a culture of life, in which every person matters and every being counts. By the time Bush left Missouri that day, more news would break: 1,000 U.S. soldiers had died in Iraq.

We stand for marriage and family, which are the foundations of our society. Unless you’re Dick Cheney’s lesbian daughter, in which case you don’t get to hang out on the podium with the rest of his kids and grandkids at the Republican National Convention.

When a President says something, he must mean it.

Is this a promise for his second term, or does Bush really think we believe him? Actually, he has no reason not to believe his own schtick.

None of the handpicked 15,000 people at Lee’s Summit High School were likely to disbelieve or disagree with him — their job was merely to applaud. Obviously, the only reason for Bush’s stop in Missouri was so he could address a friendly crowd while TV networks gathered fresh video for that night’s news. There’s no chance he’s going to change anyone’s mind or gain any new votes at these events. The media pretend this is a campaign, though Bush’s trips to Missouri aren’t a campaign at all but rather a series of infomercials — in effect, more Bush lies. Even the next day, when the Star‘s political correspondent Steve Kraske reported on the president’s trip across Missouri, two of the regular joes he quoted — Wayne Lamb and Steve Platt of Sedalia Steel Supply Inc. — had been supplied to the media by the Bush-Cheney campaign. The e-mail slugged “Background on Participants in ‘Ask President Bush’,” with biographical information on Lamb and Platt, arrived from BC ’04 at 1:10 p.m.

“For the last two or three cycles, my sense has been that we’ve moved very clearly in the direction you’re describing, not only for the Republicans but for the Democrats as well,” Kraske says when I pose the canned-campaign question to him. “You could make a case that the Republicans go to that extent more so than the Democrats do by a slight margin. On the train trip across Missouri that Kerry/Edwards took a month ago, there were a lot of pro-Bush people in the crowd. It wasn’t a pure pro-Kerry rally and that struck me as interesting. You don’t see that anymore by either party, that sort of ‘Hey, we’re going to stop and anyone who wants to see us can come.'”

Kraske thinks that’s a “slight margin” of difference between the two campaigns, but I think it’s huge. One candidate has the guts to let everyone come hear what he has to say. The other does everything he can to make sure no one challenges his perverted version of reality — and hopes the American public is gullible enough to buy it.

I want to believe the president. Especially when he says, I’m looking forward to continuing to travel your state and all across the country. I’m going to tell people where I stand, what I believe, and where I’ll lead this country.

So here’s a note to Bush-Cheney ’04. If George W. Bush is really so interested in “promoting freedom at home and abroad,” next time he comes to Missouri, hold the rally in Swope Park. Let in all the people, regardless of their views. Since Bush is so strong and courageous, that shouldn’t be a problem, right?