Stuff You Should Know’s Josh Clark talks the podcast’s history, ahead of Wednesday’s Liberty Hall show 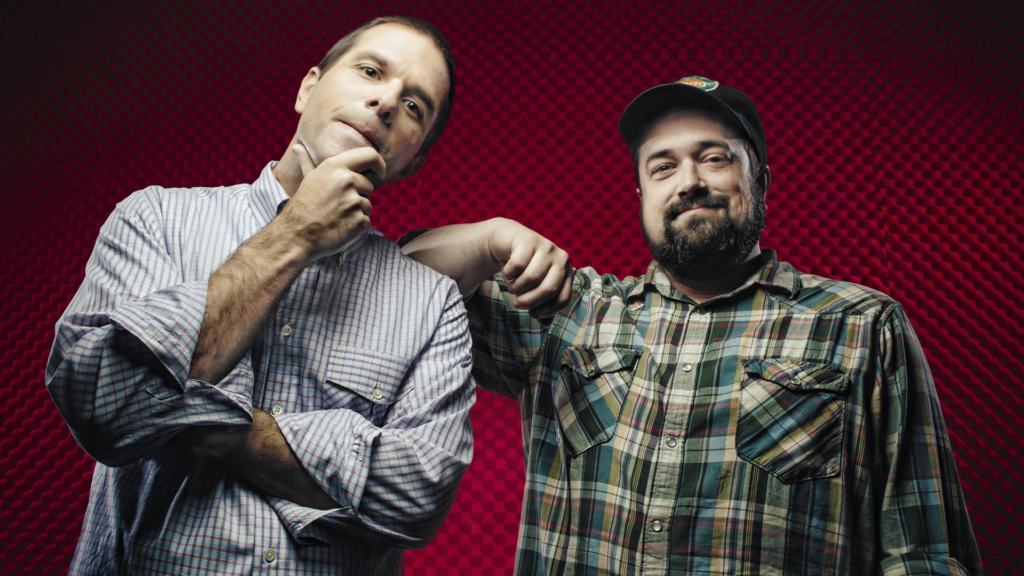 The Stuff You Should Know podcast, with hosts Josh Clark and Chuck Bryant, launched nearly 10 years ago and has spawned a formidable fanbase, a spinoff TV series and a live tour. At the heart of it all: two guys who have an insatiable curiosity, a marvelously easygoing manner, and the ability to entertainingly break down difficult subjects.

Be it puberty or publicists, hangovers or history’s greatest traitors, Clark and Bryant’s at-ease banter is balanced with strong research and a real desire for everyone to learn along with them. The pair’s live tours have become a popular attraction, as well, frequently selling out as they travel across the country. The latest tour brings them to the area for the first time, and I recently called Clark at the How Stuff Works offices, in Atlanta.

The Pitch: I think it’s really cool that Stuff You Should Know is coming to a college town.

Josh Clark: Well, yeah: We’ve got a lot of listeners who are right in that wheelhouse, who are of college age. We figured that out at one of our first shows, actually. Some of the first shows that we did were in Toronto, and then Vancouver. The topic was “How Bars Work,” which is really interesting.

We did two shows each night. We don’t do that now, but these were early, and we hadn’t figured that out yet. The second show — the late show — they showed up, and they’d clearly been drinking for a while, and they were really loud and rowdy. Just a lot of college-age [kids], ready to throw down and party while sitting and listening to a live podcast. [laughs]

It seems like you and Chuck Bryant have gotten a lot more comfortable with live shows as they’ve gone on. Is that due to the fact that the recorded version that goes up is after you’ve done the episode a couple of times?

There’s always that first time that we’re doing a show on a tour and we know the stuff not so well — or, at least, not as well as we will by the fifth show — and there’s definitely a little anxiety on that first or second show, but overall, just having done more and more shows over time has really calmed us down, especially me.

Chuck might’ve had the normal set of nerves that any normal person would have, getting onstage in front of people, but I had an almost debilitating stage fright at first, that I worked out by just immersing myself in it — just doing it again and again, and just finding out that screwing up onstage in the middle of a podcast isn’t the worst thing that could happen. It’s like immersive therapy, and I can attest. 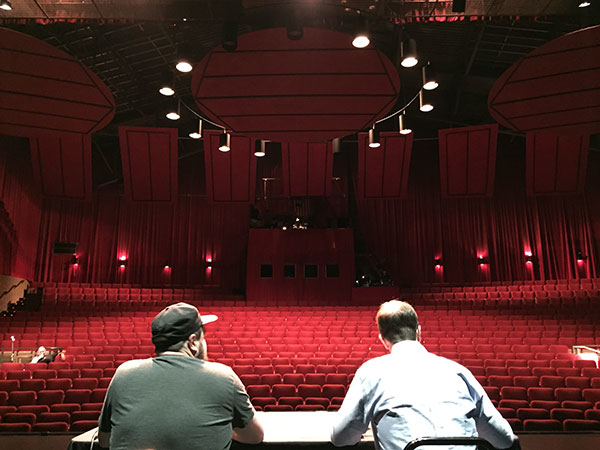 Does it help that you do the podcast in one take as a matter of course?

Out stuff is so unpolished — even the produced stuff that is released and people listen to as a podcast — it’s so unpolished and just conversational that messing up in the middle of a live podcast, most people come kind of half-expecting that. At the very least, when they witness that, it’s not like there’s going to be much surprise. I think knowing that we have such a forgiving audience, it allows us to relax a little more and kind of fly by the seat of our pants more.

I would think that anyone attending a Stuff You Should Know live event would expect not only the occasional mistake, but digression, tangent-following and the like, right?

Oh, yeah. For sure. I think they’d be mad if they didn’t get one or two of those in a live show, you know? That’s just such a part of the podcast — and an unintentional part, too. It’s not manufactured in any way. We don’t say, “Oh, we need to go off on a tangent,” right about the 13-minute mark of any given episode or anything like that. We just kind of let our minds wander and we don’t stop ourselves. It’s just such a part of the podcast that it would have to be part of the live show, or it would just be weird.

What’s sort of been the arc of the show, be it in terms of listener response or how you feel about it?

For me, in particular, it’s grown in a couple of ways. First, it’s grown in production quality, which has made a tremendous difference, especially if you go back and listen to the earliest ones. [Producer] Jeri [Rowland] was obviously learning how to do this, as we were. They were, like, five minutes long, and I had this weird, almost hostile, aggressive persona. I’m as baffled by it as much as anyone when I go back and listen to some of those older episodes.

But, I think that the growth has also taken place just in that we know what we’re doing. I think that there’s just been a growth in confidence, you know? For a long time, both of us were just like, “I can’t believe this many people just want to hear us talk about something. Surely, somebody’s going to stand up and be like, ‘These two are idiots!’”

And, many people have, especially if you go read the iTunes reviews. There’s a few people who say that sort of thing, and are clearly disgruntled about whatever our jam is, but for the most part, people like it, and the more relaxed we’ve gotten and the more confident we’ve gotten, is the fact that the thing that we do, only the two of us can do and put out.

When presenting information, it seems that you’re just as interested and excited to learn about these topics as the listener. Is that the case?

For the most part. Every once in a while, there’ll be a topic that’s like, “This topic is awful. It’s terrible.” I would direct you to jackhammers. It was a thin topic. Not just the topic article on How Stuff Works was thin, but thin because there’s just very little to talk about with jackhammers. They’re a very straightforward tool. They have a very unremarkable history. They haven’t been involved in anything majorly impactful. You can do the same with with a hammer or with dynamite. It was just a loser topic.

But whenever we come across a topic like that, we just do it anyway. People ask, “Why would you do that topic?” We do it anyway because we’ve just got this mission where everything is worth explaining or knowing about, even if it is a little boring. That represents probably — over the thousand or so episodes we’ve done so far — a tenth of a tenth of a percent of them. Just such a small, minute fraction of episodes are the ones where we were like, “Ugh. This is a dog.”

When I set up this interview, my wife wanted me to be sure to mention the fact that Stuff You Should Know helped her get through several years of a solitary gig taking care of research animals.

That’s really great. I’m glad to hear that. Actually, we hear that from a lot of people who have solitary jobs. I get listening to a podcast, doing something where a lot of the time, you don’t have to have a lot of intense mental concentration on what you’re doing, where you can just kind of go through the routine.

What I’ve never understood are the people who listen to us while they’re working out, especially if you’re doing something like jogging. I would think that requires something upbeat. We’re so on-the-floor mellow and laid back, that I just don’t understand how somebody could possibly get pumped to us, you know? Walks, sure.

I also get falling asleep. A lot of people listen to us falling asleep and have to go back and listen to the episode three or four times before they make it through the whole thing. I get that. It’s the workouts that baffle me.

How has learning all of this information affected you in your life?

I think the same thing has happened to me, as well. I’ve just become a more expansive thinker, I guess. I think if there has been any big change — and I’m sure there has been, with the growth of this over 10 years, almost — it’s been to see how undeniable it is that everything is interconnected, somehow, some way.

Something is related to something else: This guy who comes up in this episode actually was mentioned in another episode. So, now you’ve made that connection, you understand this whole history even more. Seeing how everything is expansive and huge, and just the breadth and scope of life, and seeing that it’s all connected and if it seems unconnected, it just means that I just haven’t found the thing that connects them yet.

What’s the preparation for difficult topics? Not the scientifically complicated ones, but ones which might be considered political or otherwise?

You have to understand how people — in the corporate world, you call them stakeholders, the people who have strong opinions on it — will be affected by it. How they view it, how it affects them, how it hurts their life, or why they’re upset about it. You have to understand why people are famous supporters of it.

You have to understand both sides of it, and while you’re doing that, it’s kind of impossible not to say, “Hey, I sympathize with this side’s point of view,” but just try to not approach the episode like that. You have to approach the episode as objectively as possible, with the understanding that complete and unadulterated objectivity is impossible.

But, you still want to be as objective as possible, which can be difficult to do when you’re familiarizing yourself with all sides and all opinions of a specific topic. So, those are a little tougher, and they take a little longer. There are weeks where we just don’t have time, because we can’t do them justice, and it’ll get bumped to a week where we have a little more time on our schedules, because, in addition to understanding the topic as you would any other topic, you have to understand how everyone feels about it.

There’s probably nothing dumber that you could do than to walk, Pollyanna-esque, into a hornets nest, because you’re going to offend everybody and you’re not going to educate anyone. If you understand both sides, then you can explain both sides to both sides, and who knows? Ideally, they’ll see both sides, and understand it better than had they heard it from one another.

Stuff You Should Know Live is at Liberty Hall on Wednesday, October 11. Details on that show here.