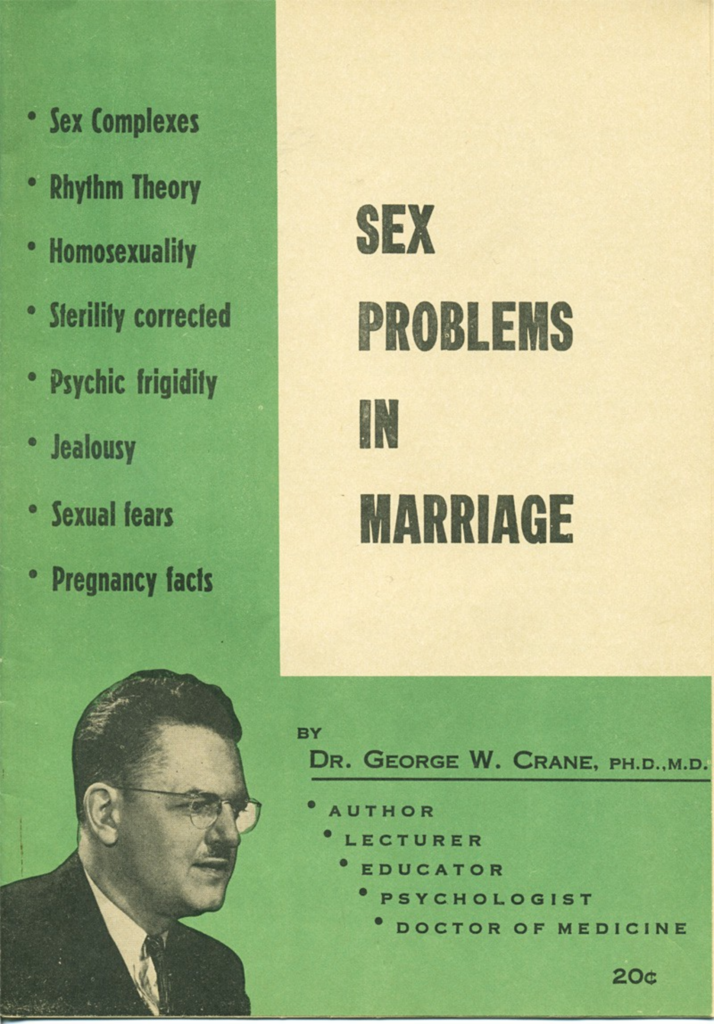 “An alkaline douche of a teaspoonful of ordinary baking soda to a quart of warm water, before each intercourse, seems to help produce pregnancy.”

“The male tempo is usually far too strenuous for women. If the husband wishes intercourse every night, the wife may cooperate, but not attempt to obtain her own orgasm but once or twice per week.”

“I am inclined to the viewpoint that a normal well adjusted wife, who sleeps beside her husband every night in a double bed, will not actively desire an orgasm more than three times per month.”

Pioneering psychologist, columnist and self-help titan George W. Crane built his empire two dimes at a time. Throughout the 1950s, 20 cents were all any troubled American had to spend to purchase peace of mind and sound advice from one of Crane’s many, many mail-order pamphlets. Your Crap Archivist has collected a batch of these, including How to Improve Your Personality, Sex Education From 2 to 20 Years and the immortal Sex Differences Between Men and Women & Nagging Wives.

Perhaps nowhere in the Crane canon does 20 cents’ worth of advice go further than Sex Problems in Marriage. What a healer he was, how soothing his words: “Remember, if you can thrill and excite your husband or wife completely, you will rarely enter the divorce court!” Even if you are a dedicated single, you can still savor the tart frankness of the doctor’s writing, especially in phrases such as “via the rectum.” (The trick seems to be making it all about him.) All of the categories below are Crane’s own.

“Men are especially concerned about their masculine virility. Never under any circumstances deflate their ego, or you may render them impotent because of psychological reasons!”

“Men are frequently sensitive about the size or length of their sex organs. Wives should be sure to inflate their husbands’ egos on these points.”

“Sometimes, if she will cease straining so hard to reach the desired goal, but relax and get the same mental attitude as when she attempts to urinate, this will accomplish the desired result. In short, she may actually try to urinate.”

“Little boys, too, often develop the same erroneous notion that the anus is the sex outlet in the female, which explains in part the widespread tendency on the part of husbands to desire intercourse with their wives at some time or another via the rectum.”

“I have never encountered a wife who didn’t retract her claim about multiple orgasms when she had finally learned how to obtain a real climax in marital relations.”

“Homosexuals seldom marry, but sometimes they do. They have become so accustomed to sexual pleasure from their own sex that they have little initial desire for the opposite sex. But they can be educated to like the opposite sex if their mates are careful to give them as satisfactory and as thrilling an experience as they have previously had with other homosexuals. It requires resolute and prolonged endeavor, however, but is not impossible.”

“Nothing irritates a husband more during intercourse … than for his wife to exclaim suddenly, ‘John, did you mail that letter I gave you this morning?’ One attractive wife came to my office not long ago with a black eye receivedduring intercourse, yet she said she had done nothing to provoke he husband’s ire! On later questioning, however, I learned she had asked him about mailing the letter, and his sudden resentment caused him to strike her before he could restrain himself.”