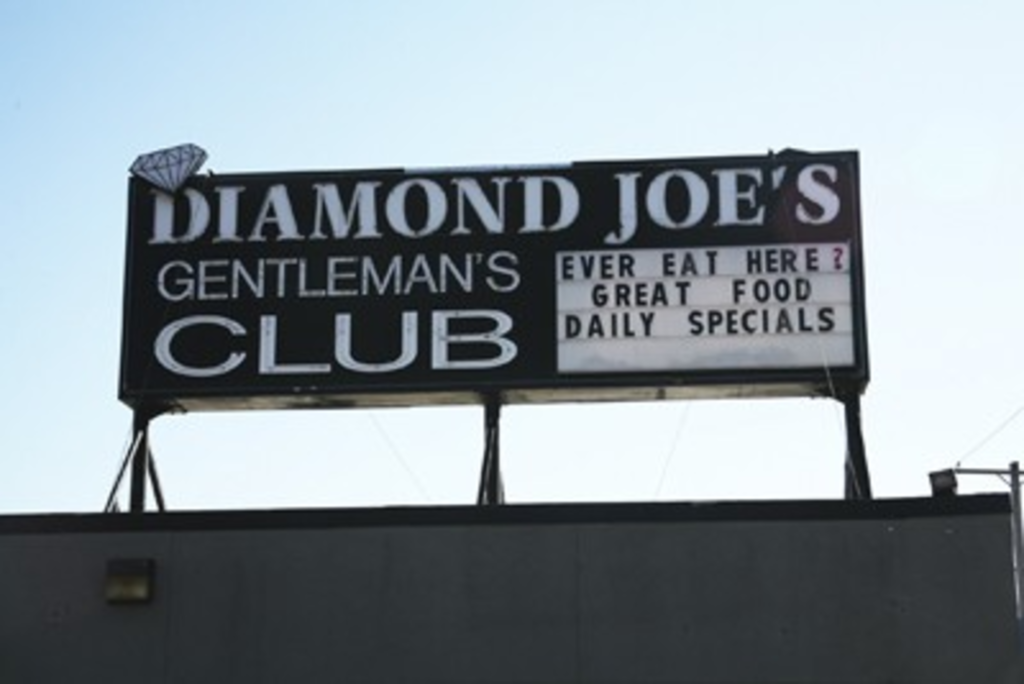 Dining in strip joints — or gentlemen’s clubs, as most prefer to be called — isn’t for every taste. I’m not sure it’s mine. I still get my nose out of joint if my server looks disheveled or dirty, so you can imagine how discombobulated I was while eating a cheeseburger at Diamond Joe’s Gentleman’s Club when Sassy sat down at the table and casually scratched some of the glitter off her nipple.

“Her areola was practically in my eye!” said my friend Truman, who had begrudgingly joined me on a north-of-the-river expedition to this offbeat form of dinner theater. But a pretty naked woman writhing around on a stage, clad only in panties and towering Lucite shoes, isn’t live theater to everyone. Like Truman, for example, who confessed to Sassy and Texas that he hadn’t been to a club like this before because he’s gay. (I’m not using their actual stage names here because, as one of the women told me, it’s one thing to be naked and another to share too many personal details.) They thought this revelation was hilarious. “We don’t get many gay men in here,” Texas said, “not even for the food!”

Diamond Joe’s is proud of its cuisine, though. The sign above the entrance boasts, “Ever eat here? Great food. Daily specials.”

Texas, a pretty, skinny woman (and surprisingly unvoluptuous — I’ve seen chickens with bigger breasts), insisted that the Diamond Joe’s steak special on Tuesdays and Fridays was the best meal deal in town. “You get a 16-ounce T-bone with Texas toast and a baked potato for $8.25.”

A meal and a show! While Sassy strutted and posed on the raised stage in the center of the room, Texas raved about the food at Joe’s. “We eat here every day,” she said.

I had ordered that day’s special, a big fat cheeseburger and fries. Truman nibbled on a grilled Reuben sandwich and chips. He was overwhelmed by the nudity and some of the dancers’ agility. And Texas had a lot of interesting things to say.

“Some of the regulars who come in here don’t want a lap dance,” she told us. “They kind of see me as their therapist. They come in and tell me all their problems.”

I later asked Sassy if she had similar fans. You know, the kind of man who wants a therapy session? She rolled her eyes. “I don’t hang on to those too long. I’m too blunt.”

Sassy is only 5 feet 1 inch in her bare feet, but those sexy clear-plastic heels add another 7 inches to her stature. “They can be a little wobbly,” she told me, “but only if you’re not careful.”

It was a modest lunch crowd, maybe a handful of men, including one in an expensive suit. “He’s a surgeon,” one of the dancers whispered. This horrible economy has hurt even the gent’s-club business: The lunch crowd is smaller and the tips not nearly so good. Weekend nights are still rocking, though. Even laid-off workers need to blow off some steam. “Is it an all-male crowd?” I asked Texas. “Do women come in here?”

“Every woman must be escorted by a gentleman,” she said primly. “And most of the women who come here are straight.”

Diamond Joe’s is a club for gentlemen, don’t you know — and not for cheapskates. The place doesn’t take credit cards, and the ATM at the entrance charges a $10 banking fee. After tipping many of the dancers, I wasn’t nearly as flush as I was when I walked in. But the burger was good.

The food is much better at the Shady Lady Lounge on the city’s East Side. Back in the 1960s, this venue was a music club called Genova’s Chestnut Inn, which is still the name on the discreet credit-card receipts; photos of many of its blues and country artists are now displayed at Harry’s Country Club in the River Market.

Like Diamond Joe’s, the Shady Lady is as dark as a cavern inside. Both clubs have a central stage — the Shady Lady has a dance floor like the one in Saturday Night Fever — and airport-lounge-style chairs on casters, lots of mirrors and shiny metal trim.

The afternoon that I ate lunch at the Shady Lady, I wisely took along two heterosexual friends: Justin and Oliver, who eagerly tipped the dancers and lustily ate all the food I ordered. We ate at the bar where Joe, the handsome bartender, impressed all of us. “He’s the best bartender in Kansas City,” Justin said.

The big appetizer platter here may be the best array of fried delicacies anywhere. For $12 we got a mountain of deep-fried poppers, tater tots, waffle fries, chicken tenders, mushrooms and mozzarella sticks. And spicy chicken wings!

“You could feed everyone in the place with this,” Ollie said as he dipped a popper into a cup of honey-mustard dressing. It probably wasn’t so good for my cholesterol. Except for the salads, there wasn’t much in the way of low-cal fare here.

Because the Shady Lady took credit cards, I ordered a lot of food. I considered the cheap daily special, an impressive-looking “Mexican Fiesta” plate, but instead settled on a pretty authentic-tasting Philly cheese steak sandwich. Justin ordered the steak dinner, a big slab of beef that was, he said, “mostly very good — there were a couple of chewy spots.” He proclaimed the baked spud first-rate, served with lots of butter and sour cream. Ollie’s Italian steak dinner, one of Shady Lady’s signature dishes, was tender all the way through, even if he had to dig under a thick blanket of melted provolone to find it.

Ollie and Justin were intrigued by a pretty blonde, Steffy, who looked like Chloe Sevigny and danced like Salome. After Justin tipped her, he said, “She looks like the girl next door from far away, but a little tougher up close.”

These dancers, I informed him, may not be Jewel Ball debutantes, but they’re hardworking young women trying to make a living.

Like my new best friend Edyth, a perfectly charming gal in a leatherette bustier, who told me all about raising pit bulls (“Don’t believe everything you read — they’re very gentle”) and a personal life touched with heartbreak. I couldn’t pull out my wallet fast enough. “Here,” I said, handing her a ten-spot. “Buy your dogs a treat.”

“This is like a Eugene O’Neill play,” Ollie whispered. “I feel like we just walked into The Iceman Cometh.”

The door opened, and some burly, tattooed blue-collar workers came — or cometh — into the place. They must have been regulars because they were greeted warmly by Joe and the ladies. It was all so congenial that I could understand why these clubs were so popular. It’s like Cheers, only naked.