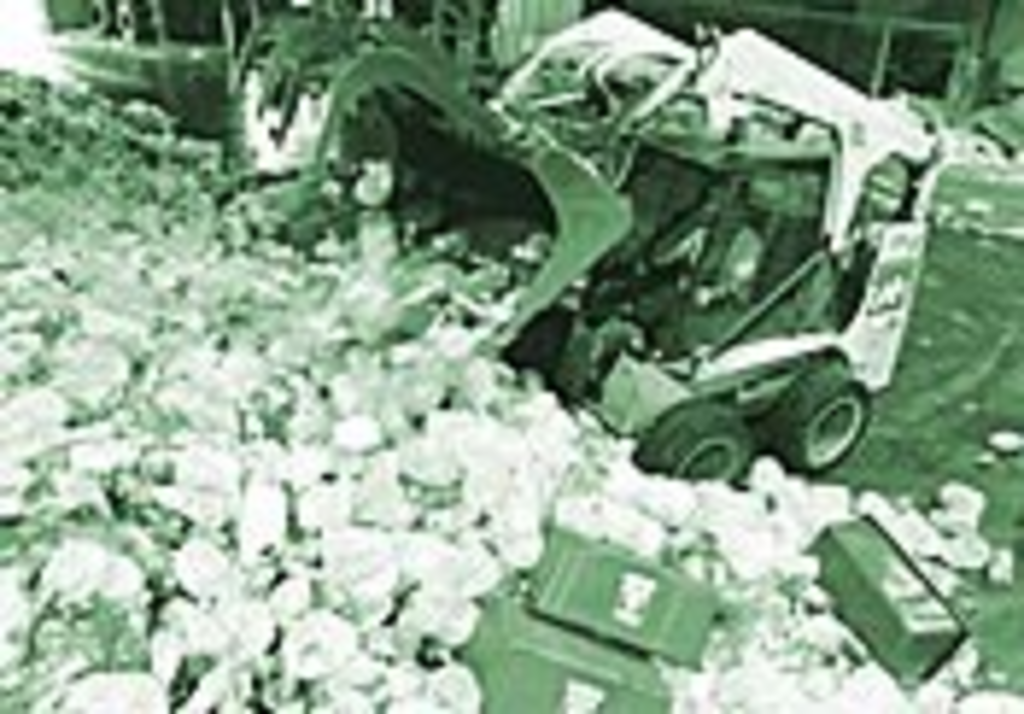 If voters approve curbside recycling, they won’t be doing anything radical. If it’s anything, Kansas City is mainstream. This burg is a consciously conservative town that mostly copies trends instead of creating them: Latest examples include a big-ticket downtown renovation project (the Power & Light District), suburban style urban redevelopment (Midtown Marketplace), and kitsch public-art charity fundraising (Cows on Parade). One mainstream ingredient missing from the urban mix is curbside recycling.

“Kansas City is one of the slower ones,” says Jerry Powell, editor of the Oregon-based Resource Recycling Magazine. “Only a handful of other big cities — Indianapolis is one — don’t have it. Kansas City is way behind the curve.”

But if voters approve Question 2 on August 8, Kansas City will join some 10,000 other U.S. communities with curbside recycling.

Back in 1990, when recycling advocates presented their first proposal and KC voters defeated it, curbside pickup wasn’t common — much less considered a basic city service. The surge for curbside was still building — Powell says the intense growth in recycling ran from 1988 to 1993, “first suburban, urban, and then rural.”

In Kansas, voters never had to face the issue at the polls. While Missouri’s Hancock Amendment requires voters to approve any increase in fees, in Johnson County curbside recycling was passed by the various city councils. The result has been high citizen involvement and little controversy.

Overland Park and Prairie Village started curbside recycling in 1989. Officials in Prairie Village say that 65 percent of the households participate (the $8-a-month charge appears as a special assessment on residents’ property tax bills). In Overland Park, households contract directly with waste haulers for curbside pickup; the average cost is $1.75 a month and participation is said to be 80 percent. “As far as recycling, residents are pretty knowledgeable, pretty receptive,” says Jim Twigg, special projects coordinator for Overland Park’s Health and Environment Division. The city sends out a quarterly newsletter that includes recycling information.

And the fact that neighborhoods are filled with green bins doesn’t hurt the cause. “It’s a most popular thing to do. A lot of it is peer pressure, which, ironically, is very high in this business,” says Powell.

That hasn’t swayed Missouri voters, however.

Though the 1990 effort was run by professionals in the marketing and public-relations fields, landlords and real-estate-management firms helped shoot it down — they didn’t like having multifamily residential units included in the proposal. Two years later, grassroots organizers tried another curbside proposal. It, too, failed: Voters were apparently turned off because the measure was too complicated, especially in how it limited the pickup of nonrecyclable trash.

The August 8 question is more straightforward: Each Kansas City household (one- and two-family dwellings, not including apartments) will be charged $1.95 (and, in the event of market fluctuations, never more than $2.50) for curbside pickup. Residents will get two bins: one for paper, the other for plastic bottles and metal and aluminum cans. Recycling trucks will pick up either the paper bin or the container bin on alternate weeks.

Despite the proposal’s simplicity, some people view curbside recycling as a nonessential city service promoted by big-government celebrants of Earth Day. Also, people who live in low-income neighborhoods that tussle with city hall for basic city services — police and fire protection, curbs, sidewalks, and sewer and water maintenance — aren’t likely to support something so low on their survival list.

“It’s still viewed in the manner of budget choices,” says Powell, “taking (money) away from other budget items, like police.”

Low landfill costs have traditionally contributed to recycling resistance, but those costs are rising. And as the recycling industry matures — as current markets for recycled products expand and a wider range of products can be recycled — insiders say landfill costs figure less into the economics anyway.

“It’s a service,” says Joe Truini, a reporter with Waste News, published out of Akron, Ohio. “If it’s worth it or not is not really the point.” Trash needs to be hauled away, and that costs money, he says, adding that private waste haulers are beginning to consider recycling a profit center.

Deffenbaugh Industries understands those possibilities. The locally owned, privately held waste hauler and recycler will score a five-year contract with the city if voters approve the new measure. Deffenbaugh got into the industry because of a government mandate: In 1989, Lenexa required its trash haulers to include curbside recycling. Since then, Deffenbaugh has expanded its reach and now controls the majority of recycling contracts in the metropolitan area, including 11 out of the 12 communities in Johnson County. With its expansion, the company continued to look for ways to turn a profit on the service.

“Curbside is difficult at best to make money at because it costs so much (to handle),” says Michael Clagett, Deffenbaugh’s recycling coordinator. If voters pass Question 2, he says, “Kansas City would offer a model in not doing a ‘curb sort'” — and if Deffenbaugh employees didn’t have to sort paper, plastic, and metal at the curb, the company “could move more material and hit more houses.” In response to the fluctuating market for recyclables, Deffenbaugh continues to invest in a material recovery facility (which it began operating in 1992, partly in response to Lenexa’s mandate), which Clagett describes as a system of conveyors and balers to process the materials. He says his company’s willingness to agree to a five-year contract with a floor price of $1.95 — to ensure at least a minimum level of revenue — and a ceiling price of $2.50 is a sign that Deffenbaugh senses a coming stability in recycling markets. “We want the markets to be strong, and we’re committed to that,” he says. As for renegotiating the charges in the event of wide price swings in the market, Clagett says, “We don’t intend to be back beating on (Kansas City’s) door.”

Deffenbaugh isn’t the only waste hauler seeking a market stabilization. Waste Management Inc., the country’s largest waste hauler (with $10 billion in annual revenues), recently announced its commitment to stick with recycling, despite speculation that the corporation, facing financial difficulties, would abandon it altogether.

But industry specifics matter little to the average voter contemplating whether to pay for curbside recycling.

Robert Mann, an attorney who heads Bridging the Gap (a local nonprofit environmental group partially funded with state and city money), is leading this year’s effort to pass the proposal. The campaign organization, Citizens for Recycling, recognizes the need to educate the public, but the strategy is to keep it simple and targeted. Industry standards suggest that 20 percent of Kansas Citians always recycles (using drop-off centers), 60 percent wants to but needs it to be more convenient, and 20 percent never will recycle. The Citizens campaign is aiming for frequent voters within that middle 60 percent. That approach and limited financial resources, Mann says, have kept the recycling issue away from broad public view.

Another factor is Pat Gray.

Gray, Kansas City’s most successful political strategist (having spearheaded voter approval of the Richards-Gebaur conversion to an intermodal facility and the downtown Power & Light District project) has his handprint on the campaign. Mann says he approached his friend Gray back in January. “Pat recognizes a need for recycling at this point in time,” says Mann. “It’s a basic issue.” Gray’s specialty is targeting voters who likely will cast their ballots for an issue or particular candidate, and timing a big push just days before the election. Gray’s trademark is phonebanks, and Mann says environmentally conscious volunteers are already manning the Citizens’ telephones, talking with what Gray hopes are likeminded voters.

Gray says he’s accepted a reduced fee to help in the campaign, which is budgeted at around $100,000. He says he got involved because Mann asked him to, and he admits that recycling lacks the flash and controversy of his other campaigns. “It’s kind of mundane,” he says. “The issue itself has some pros and cons, but in terms of a concept, anymore it’s mainstream.”

For Kansas City, it may be just a matter of doing what other cities do.