Streetside: Uber is user-friendly. That doesn’t mean Uber respects you 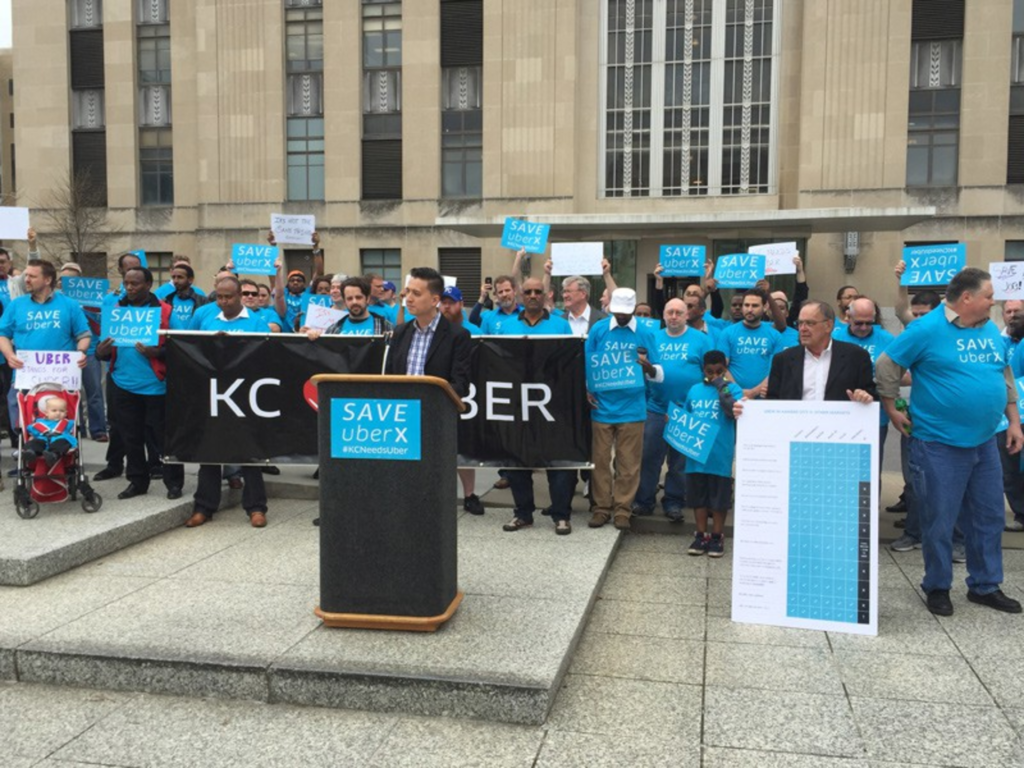 A retired schoolteacher named Tom Alexander told me recently that he makes more than a thousand dollars a week driving for Uber. He wakes up at 6 a.m. on weekdays and is logged in and ready to shuttle folks around Kansas City until about 4:45 p.m., when his wife gets home from work. Occasionally, he also does weekend pickups and drop-offs for a few hours.

“I tried for a long time to find a part-time job,” Alexander said. “I sent out 40 to 50 résumés and heard nothing back. With Uber, I applied, I had a new-enough car, and I was ready to go. Been doing it since September. I’ve made $800 since Monday.”

This was on a Thursday. We were standing in the lobby at City Hall, waiting to pass through the metal detectors. Alexander and about 50 other Uber drivers were there to protest a City Council ordinance that Uber insisted would place such an excessive regulatory burden on its business model that it would be forced to cease operations in Kansas City.

“I’ve been in Kansas City 22 years, and it’s just now starting to wake up from a long, dead sleep,” Alexander said. “But stuff like this, when you have the City Council preventing a company like Uber from operating in the city, that’s going backwards. It screws everything up.”

Alexander’s frustration is misdirected. The reason that Uber may leave town is not because Mayor Sly James and the members of the City Council — who unanimously approved revisions to the ride-sharing ordinance on Thursday — seek to stifle new competition to traditional taxis. It’s because Uber is making unreasonable demands on the municipalities in which it seeks to do business. The problem is Uber.

I wish that weren’t true. According to a quick scan of my e-mail receipts, I’ve taken roughly 40 Uber rides since the San Francisco–based company rolled into Kansas City last May. I summon Uber drivers to take me home from bars, and its services were especially convenient during the week this winter when my car was in the shop. Uber is almost always faster and cheaper than calling a cab. I’m a fan, and I found Alexander’s tale of newfound employment uplifting.

But there is simply no way for a reasonable person to review the facts and not conclude that Uber is in the wrong, both here in Kansas City and elsewhere.

Uber is a company that screens and hires people to drive other people to places they need to go, then takes a cut of the drivers’ fares. It is plainly a taxi company. But Uber proclaims that it is not a taxi company, and its entire business model is predicated on the company’s ability to convince people that what it does is so different from what taxi companies do, a whole new set of rules and regulations applies. That is, no rules and no regulations.

Uber did not respond to requests for comment for this article, but across the street from City Hall on that Thursday, Uber’s Kansas City general manager, Andy Hung, told a crowd of reporters that Uber is “not a taxi company; we’re not a transportation company; we’re a technology company.” He later compared Uber with Orbitz, arguing that just as Orbitz connects travelers with airlines, Uber connects riders with drivers.

It sounded good when Hung said it, but the analogy doesn’t withstand scrutiny. For one, Orbitz doesn’t hire airlines as Uber hires drivers. And airlines are regulated by the Federal Aviation Administration, in the interest of public safety; pilots are required to be properly licensed and trained and to undergo background checks.

Uber doesn’t believe that cities and states should conduct background checks on its drivers and says it conducts its own rigorous background checks on its drivers. But these checks go back only seven years, and several instances point to insufficient rigor. In January, a Houston Uber driver who sexually assaulted a passenger was found to have previously served 14 years in federal prison for cocaine distribution. Late last year, the district attorney in San Francisco filed a civil suit against Uber, alleging that the company misled consumers about its background checks.

“If I have a cab driver that commits a crime, Regulated Industries is notified immediately,” says Bill George, owner of Kansas City Transportation Group, which operates Yellow Cab Co. in town. “Every permit holder is notified. That driver can’t hop in another taxi tomorrow because a notice goes out saying his or her license is suspended. When the city is the central clearinghouse, you can get rid of bad actors. With Uber, none of that is in place.”

Another plank of Uber’s PR campaign is to characterize the city’s up-front costs for new drivers as overly burdensome. Let’s have a look at that.

Prior to the revision of the ordinance last week, a new Uber driver had to pay $300 for a permit; $50 for a driver’s certificate; $12.50 for an occupational license; and $22 apiece for two inspections — a little more than $400. At Uber’s urging, the city agreed to reassess those costs and went back with a proposal dropping the permit fee to $250 and eliminating the inspection costs if the company paid $10,000 up front to the city.

The city then offered an alternative. If Uber paid $40,000 up front, the city would drop individual drivers’ permit fees to $100. In this scenario, a new Uber driver would have to pay only $178.50 to get up and running.

Uber, a company recently valued at $40 billion, deems that amount too high for its drivers to pay.

There are some likely reasons for Uber’s preposterously rigid stance. One has to do with insurance. As taxi companies know, it is very expensive to insure a fleet of commercial vehicles. If Uber indeed has 1,000 drivers working in Kansas City, as it has said in press releases, the cost of insuring their cars would be astronomical. Instead, Uber shifts that burden onto the drivers and calls them independent contractors, which gives Uber an enormous competitive advantage over traditional taxi companies. A recent BuzzFeed investigation found that Uber encourages its drivers not to get commercial insurance and instead to buy cheaper personal insurance, which leaves them, according to that report, “uncovered and in some cases leads them to incorrectly register their cars in violation of the law.”

Although some insurance companies, including Geico, have created new policies for ride-share drivers, most Uber drivers either can’t afford commercial policies or simply don’t purchase them. And many insurance companies are canceling the regular policies of individuals whom they discover to be driving for Uber or its ride-share competitor, Lyft. One reason that Uber may be so resistant to sharing its drivers’ information with cities, then, is that insurance companies with access to that information might cancel the policies of contractors driving for Uber without commercial insurance. This would dramatically reduce the number of available Uber drivers, limiting the company’s business.

James indicated at the council vote that Uber was stalling in Kansas City while awaiting the passage of Missouri legislation that could allow it to disregard civic ordinances. The company has hired eight lobbyists to work in Jefferson City this session, according to filings with the Missouri Ethics Commission. In Kansas, a bill regarding background checks and insurance coverage awaits Gov. Sam Brownback’s signature; Uber is threatening to pull out if the bill becomes law.

That tactic worked in Idaho. After the city of Boise passed regulations for Uber, the company took the fight to the state Legislature and recently got a bill passed that allows it to bypass city ordinances.

It would be a mistake for lawmakers to yield to Uber in Missouri or Kansas. Uber is not above the law. When I order a pizza from an app on my iPhone, the city still regulates the health and safety of the pizza place making my pie. There is no good reason that ordering a ride should be any different. The standards that the city is asking Uber to meet are consistent with what it asks of any other company operating in the city — and, in many ways, the demands are fewer, thanks to recent amendments.

After the council vote, I found myself in an elevator with seven Uber drivers, all wearing blue shirts that read, “Save Uber.” The fact that their jobs with Uber were probably about to disappear was dawning on them.