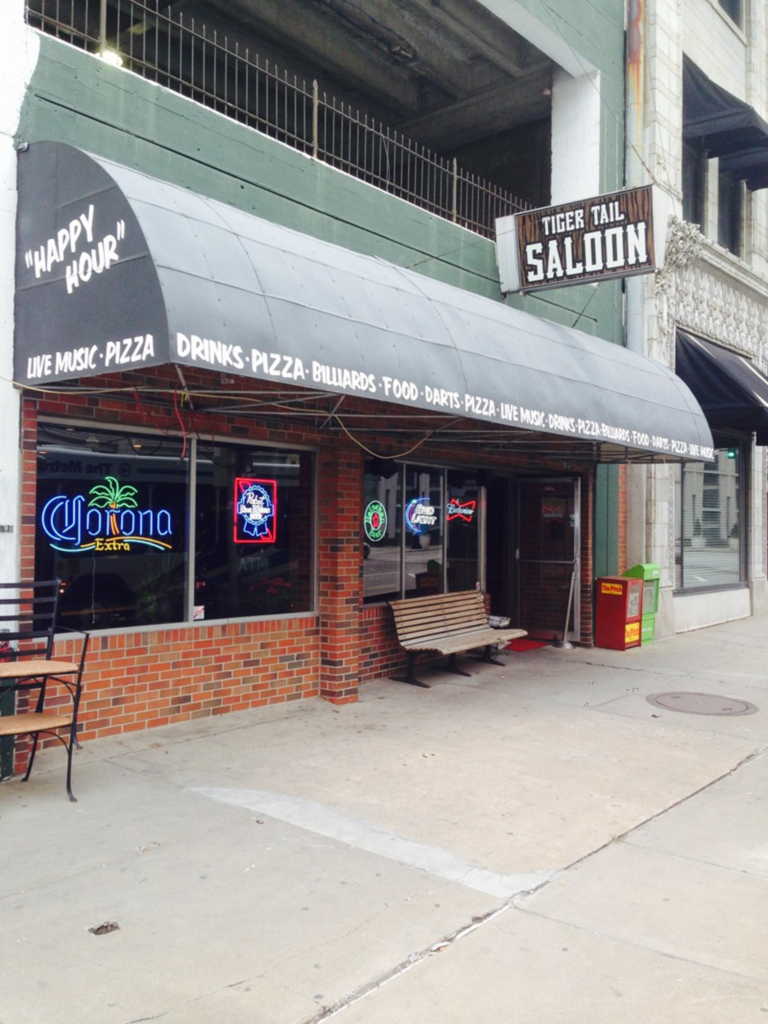 The Tiger Tail Saloon is nestled among eyesore parking lots and tall, bland buildings in the gray corner of downtown that is sometimes referred to as the financial district. The sleepy and cute River Market neighborhood, the corporate and shiny Power & Light District, and the artsy and gentrifying Crossroads District are close by. The Tiger Tail Saloon, at 813 Walnut, belongs to none of these worlds.

There is a vague air of lawlessness about the joint — if you were looking for trouble, maybe you’d find it here — and a scrappiness in its approach to business. The Tiger Tail is a DIY place. I don’t mean DIY like “knit a cowl and sell it on Etsy,” but DIY as in “let’s turn the bottom level of the attached parking garage into a music venue.” I mean DIY like “the guy who runs the place used to sleep on the floor in the bottom level of the attached parking garage.”

That guy is Jordan Weinberg. I met him on my second trip to the Tiger Tail, in October. My first visit, a couple of months after its April rechristening, wasn’t too special. The jukebox was too loud, the drink prices average, the decor forgettable. It felt at the time like a downgrade from the space’s previous tenant, a low-key, LGBT-friendly dive called the Stables Bar and Grill.

One day this fall, I happened to drive past and see that patio seating had been set up inside the parking garage adjacent to the Tiger Tail. Someone had turned the driveway to the parking garage into an outdoor smoking section for the bar. I am charmed by sights like these, which function completely unbothered by aesthetics. I pulled over and popped in for a few drinks. Before long, I’d met Weinberg, a voluble, 50-year-old former commercial-real-estate agent from California. “So you’re interested in the story of the Tiger Tail Saloon, are you?” he said, picking at a basket of burgers and fries. “Oh, it’s a whole mess. It’s a big, complicated mess.”

In 2005, Weinberg was, he told me, a millionaire living in Los Angeles. He met a woman from Kansas City and ended up buying her a house in North Kansas City. “She was supposedly an actress, but it ended up she was a Heidi Fleiss girl,” he said. “She was playing me.”

Before the relationship went south, though, he bought some property in downtown KC. “I saw that downtown here was like L.A. was 30 years ago,” Weinberg said. “You could buy buildings for next to nothing. And I knew to go after the garages, because without the garages, these historic buildings don’t have parking.”

So he purchased about an acre of property that included the Stables Bar and the attached 300-spot parking garage, but he stayed in California. “I was an absentee landlord,” he said. “Standard Parking was the third-party manager. I bought it with good intentions, but it never really cash-flowed. Then I hit a rough patch financially. Eventually, I put the property into Chapter 11 bankruptcy.”

That year, 2012, Weinberg moved to Kansas City to bring the property out of bankruptcy. He painted the place and did maintenance work, and he opened an outlet for post-office-box rentals on Grand. Because he was broke, Weinberg lived in the basement of the parking garage. There were no rooms, just thick curtains hung for privacy and protection from the elements, and a shower stall.

During that time, Weinberg began to suspect that the owner of the Stables, John Rizzo, was under-reporting profits in order to pay less rent to Weinberg. Their lease agreement was based on profit percentage. Lawsuits ensued. (Weinberg has also sued Standard Parking in federal court for breach of fiduciary duty.) Weinberg’s property was eventually foreclosed on. Then a wealthy friend of Weinberg’s from L.A. swooped in and purchased the building, allowing Weinberg to continue managing it. He booted the Stables and opened the Tiger Tail in April. “I’ve got about a year to start showing a profit, or else who knows,” Weinberg said of his arrangement with his California landlord.

Bringing in live music is one way that bars try to drum up business. In October, Weinberg kept referring to the music venue that he was building downstairs. I assumed that he was referring to a room in the basement of the bar. Finally, I asked to see it, and Weinberg led me out the side door into the parking garage. We walked down two ramps to the bottom. A half-built bar and a stage waited at the farthest end of the space, where the garage dead-ended — a literal underground music venue.

“I’ve got it all permitted and licensed for entertainment and alcohol,” he said.

The Tiger’s Den (as Weinberg calls the subterranean saloon) has now put on about 10 shows — mostly punk and hip-hop, genres less sensitive to the constraints of parking-garage acoustics. Weinberg told me that he was part owner, from 2000 to 2004, of an L.A. punk venue called the Cactus Club. He said he’d come up in Venice’s hardcore scene in the 1980s. “I was in a punk band when I was a teenager — just like a little garage band that played parties sometimes — but the guitarist was John Nelson, who went on to play guitar for Suicidal Tendencies. And then the bass player later formed Wasted Youth.” (Nelson and his new band, Nasty Habits, played a show at the Tiger Tail a few months ago.)

Lately, though, the shows have skewed more toward hip-hop. “We started doing more, whatever you want to call it, urban events about two months ago, and it’s gone very well for us so far,” Weinberg said. In November, the Tiger’s Den booked underground rappers Johnny Richter and Liquid Assassin, along with Potluck, a Humboldt County rap duo with 200,000 Facebook followers. One of Potluck’s MCs, 1 Ton, told me of the Tiger’s Den: “It has a real independent feel — a good venue for anything that is not mainstream. You can have a rave, a punk-rock show, an underground hip-hop show. It was a good fit for us.”

Last Friday, I went to the Tiger’s Den to see that night’s event: six hours of screeching dubstep and various other strains of electronic dance music, going till 3 a.m. All was not well when I stopped by around happy hour, though. The garage door to the bottom level — a cold-air barrier — had fallen off its hinges, and the 15-ton heat pump that Weinberg had installed wasn’t working. The promoter of the show was not pleased. “We’re four hours out and you can still see your breath down here,” he told Weinberg, who had a smudge of mud on his cheek.

Around midnight, at the bar upstairs, a black-and-yellow party bus called “The Beast” pulled up outside and emptied a crowd of 20- and 30-something black patrons into the Tiger Tail. The Waylon Jennings on the jukebox quickly gave way to Rae Sremmurd’s “No Type” and Bobby Shmurda’s “Hot Nigga” (sample lyric: I been selling crack since, like, the fifth grade). A dance party sprouted up by the pool table in the back.

Downstairs, the heat was pumping again, the laser lights were shining and a smoke machine was fogging up the place. The bar was open, and a server was walking around selling $2 kamikaze shots. A makeshift VIP area had been erected in the middle of the space ($250 per table, including seven admissions). Glowsticks were twirling. Crystals were for sale at a booth. There were white people with dreadlocks. A Kansas City rave.

Weinberg had even added a new restroom over the past two weeks. “Each time we have a show, I put a little of the money that comes in toward fixing things up down there,” he told me. “It’s taking awhile. But we’re getting there. For now, this place is pretty much held together with spit and glue.”