Streetside: Over a Barrel in Martini Corner 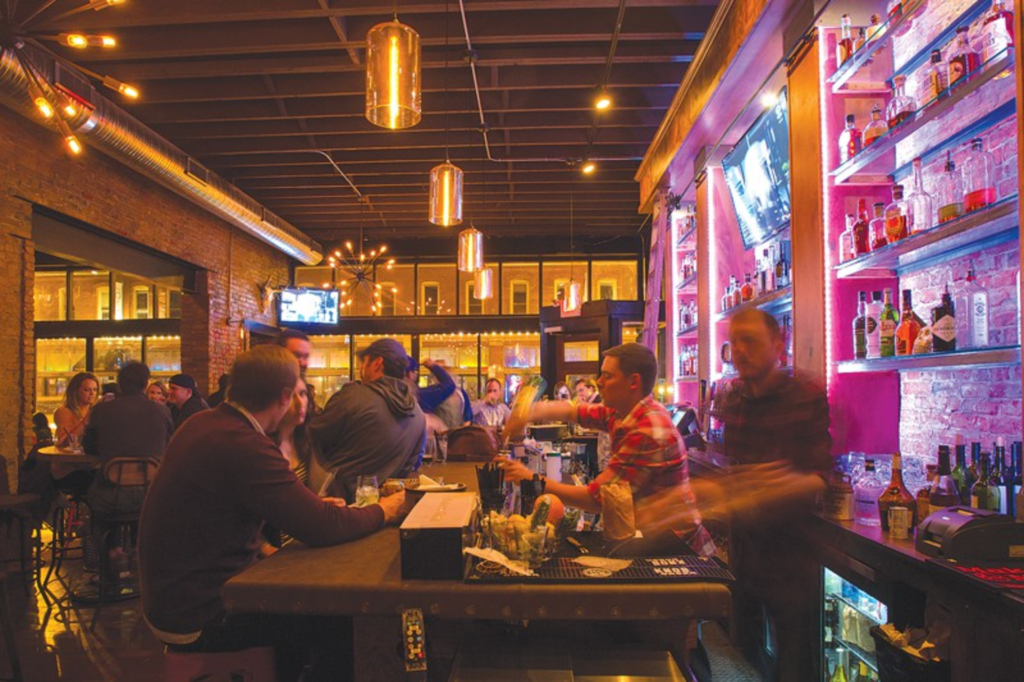 Martini Corner is not a pair of words I’m ever eager to pronounce. Not because I have a problem with the bars and restaurants along the Union Hill block that goes by that name. I don’t. I just find the name too aspirational, too contrived, too inaccurate — Red Bull being more essential than sweet vermouth to these establishments’ bottom lines.

Which, you know, whatever. Red Bull’s too fancy for me sometimes.

The name Martini Corner came from Chris Seferyn, who throughout the 1990s and early aughts pioneered a mini-nightlife district just east of the intersection of 31st Street and Gillham. It started with the Velvet Dog, in 1994. Then there was Empire Room. Buddha Bar. Dragonfly. Café Trocadero. Mint. All had different concepts, but if there was a through-line, it was about trying to emulate ostentatious nightlife ideas popular in Las Vegas, Los Angeles and New York during the go-go ’90s and pre-recession ’00s.

The Velvet Dog billed itself as a “martini lounge.” Empire Room started out as a “movie house/martini bar.” Mint, a successor to Empire Room before the space reverted to being Empire Room (it’s complicated), was a “fashion lounge.” (“People are going to enter through the back door like in L.A.,” Seferyn hilariously told Hearne Christopher Jr. of Mint, in a 2008 Kansas City Star gossip column.) I don’t think anybody ever knew what the fuck Dragonfly was.

Those concepts have aged about as well as a Sex and the City episode, which is why it was no huge blow when the Dog suddenly closed last October. Seferyn has apparently skipped town, though nobody wants to say so on the record. Six bars are now on the block: Besides Empire Room, there are the sportsy Tower Tavern, the German beer-and-sausage joint Haus, wine-and-martini bistro the Drop, and beachy Baja bar Sol Cantina.

Chris Ridler owns the Drop, Sol Cantina and Barrel 31. He is more or less the new Seferyn, but his territory isn’t Martini Corner. An effort is under way to rebrand the block and get away from that name. It’s a quiet effort, though — Ridler was a little evasive when I asked him directly about it. “There’s been some conversations about what Union Hill is and where our concepts fit into that,” is the most interesting thing I could get him to say on the topic.

I’m not sure how you get people to stop calling a nightlife district one thing and start calling it another — my vote would be to call this one simply “Union Hill” — but perhaps it starts with changing the tone of the places doing business within it. That seems to be Ridler’s goal with Barrel 31, a whiskey-centric gastropub that opened in the Velvet Dog space (400 East 31st Street) last week.

“I’ve done a lot of research over the last 12 to 18 months about whiskey,” Ridler told me. “And the more I read and tasted, the more enthused I got. So the concept for Barrel 31 kind of rose out of that.”

His new place offers something on the order of 80 whiskeys, including what the menu calls “Seldom Seen” rarities such as Jack Daniel’s Sinatra Select ($25 a pour), Elijah Craig 20-year Single Barrel ($23), and Aberfeldy 21-year Single Malt ($30). The food is reasonably priced pub fare, with dishes like duck-fat fried chicken and bourbon-barbecue pork sliders.

I stopped in twice during its first week, once for dinner and drinks, and once just for drinks. The remodel, at least, is impressive. Velvet Dog was just plain gross at the end — I remember, the last time I visited, not only vowing never to return but also questioning the life decisions that had led me through its doors.

I felt no such inner turmoil at Barrel 31, which has scrubbed off Velvet Dog’s broken dreams. Apart from a highly questionable painting of a dude smoking a joint that takes up a sizable chunk of wall in the bar area, the décor is smart: a lot of wood and exposed brick, and chandeliers with silver-dipped light bulbs. There’s one of those liquor ladders, like the one at Pierpont’s but probably less necessary in this room.

We wanted to taste some whiskeys, so our server (who was wearing, as all staff members must, a flannel shirt) recommended one of Barrel 31’s eight whiskey flights. Choosing the $11 Bootlegger was on me, but I didn’t put it together, until the tray arrived, that I had asked for moonshine. I ended up pouring all but a sip of the Backwoods Habanero shot into my water glass and pushing it to a far corner of the table. If I could do it over again and was flush, I’d go for the Stormin’ the Castle (Knappogue 12-year, 14-year and 16-year, $20).

The “Hand Crafted Heavy Pours” (a corresponding asterisk on the menu warns that “having more than one may lead to an unexpected loss of clothing” — groan) are serviceable. My Curl Up & Rye (Rittenhouse, absinthe moonshine, aromatic bitters, big ice cube) was superior to my companion’s “Down & Dirty Old Fashioned,” which was several notches below what you’d get at a place like Westport Café or Grünauer.

But that’s the end of my quibbling. Barrel 31 is a major improvement over the Velvet Dog, and I suspect it will be good for business everywhere else on the block — whatever everyone finally agrees to call the block.