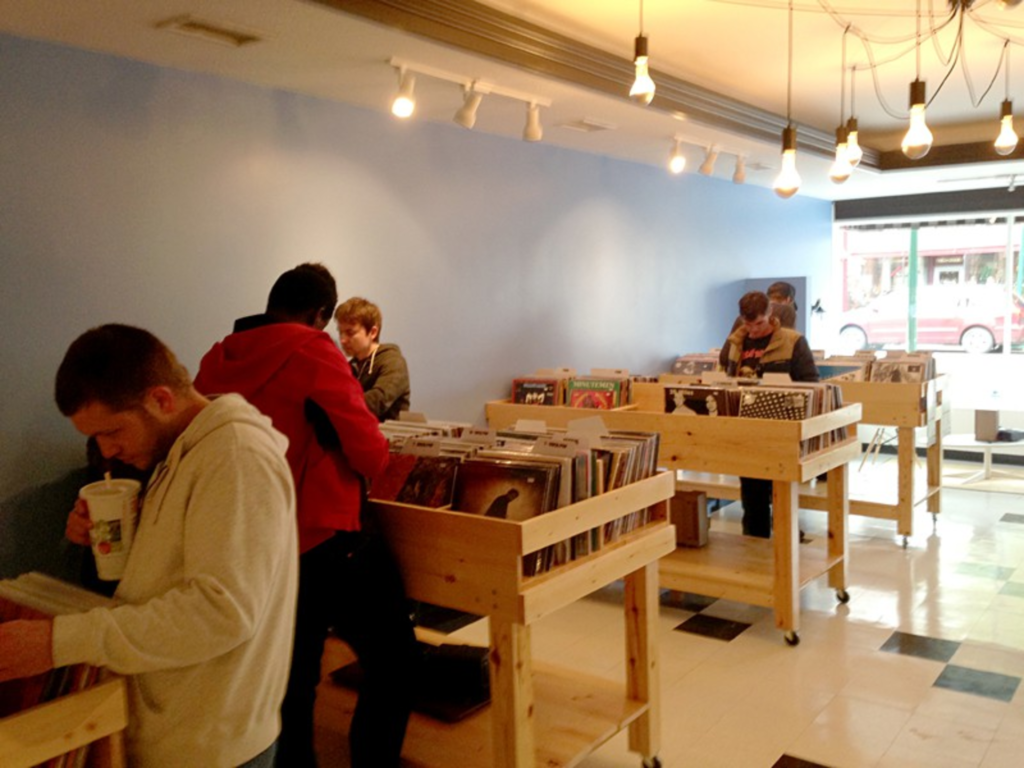 If you pay even glancing attention to the movements of the music business, you’re by now familiar with at least a few narratives. Nobody buys CDs anymore. Everybody downloads music from the Internet, usually illegally. Record stores are dying. But also: Vinyl is resurgent! (Sales are up 17 percent over last year, when more new records were sold than in any year since 1997.) What can be gleaned from this conflicting information?

For Judy Mills and Chris DeLine, the conclusion was fairly simple: Open a shop that specializes in new vinyl.

Neither had any experience running a record store. Mills, a local, has a background in retail but has worked a corporate gig in recent years. When the company went belly up, she recruited her friend DeLine, who was living in Nashville at the time, to come to Kansas City and help her open Mills Record Co. They settled on a Westport space — 314 Westport Road, next door to Dave’s Stagecoach Inn — and, May 3, opened for business.

“Judy’s lived here a long time and was in a situation where she felt like she could try something new,” DeLine says. “The pieces just seemed to fit. The shop is basically this partnership between Judy and me. We’re rookies, but we’re longtime music fans and we thought it’d be fun to try a little adventure here.”

Browse the racks at Mills Record Co. and you notice a few things right off the bat. One is that they’re peddling almost entirely new records, heavy on Stereogum-style indie rock. Other spots in town, like Vinyl Renaissance and Zebedee’s, offer new LPs, but a big chunk of their real estate is occupied by used records and CDs.

“We’re definitely going hard on the new stuff,” DeLine says. “That’s a huge part of our plan here. We think it offers a nice complement to working with the existing record stores in town, because that’s where they’re kind of lacking. So if we can keep pushing it and keep up sales, I think it’ll add a good piece to this city that’s missing.”

The store is also surprisingly cheap. If you’re like me, you want to support our local brick-and-mortars but have a hard time shelling out $19.99 for a new record when you can get it for more like $15 online. I still occasionally pay the premium, either out of a sense of civic charity or because I happen to want some instant gratification. But I tend to leave record stores wishing that buying new records was just a little less costly.

I did not feel that way when I visited Mills Record Co. on Saturday. I picked up a deluxe edition of the new Kurt Vile for $24.99 ($29.98 on Insound); Christopher Owens’ new-ish solo album for $10.99 ($12.14 on Amazon); and an old Walkmen album, You & Me, also for $10.99. The store’s system for pricing seems to be that recent releases are marked around $16-$17, but albums that have been around a few years — Smith Westerns’ Dye It Blonde, the War on Drugs’ Slave Ambient — are tagged in the $12-$13 range. As it turns out, that price drop is basically the difference between my leaving a record store empty-handed and my leaving $50 lighter. (How long they can sustain those prices while keeping the lights on is another matter, but I’m rooting for them.)

In Nashville, DeLine ran a music blog called Culture Bully, and part of his aspiration for Mills Record Co. is to establish an online presence. Not just online sales but also a newsletter; a local directory of venues, labels and bands; and a blog, on which he publishes a daily roundup of local-music news bites. He has spent the last few months brushing up on local music, and he hopes that Mills Record Co. can become a sort of hub for the KC scene.

“All of our racks are on wheels, so we’re set up to do in-stores and events like that,” DeLine says. “We’re really trying to work on that community aspect. I’ve talked to a lot of people — a lot of people in punk bands lately — who don’t feel there’s a home for them in town. We want to be that spot.”

Vinyl is the focus at Mills Record Co., but DeLine and Mills are making an exception for local acts. “It’s sort of unfair of us to expect everyone to have the means to print up their own vinyl,” DeLine says. “So we’re buying CDs and cassettes from local bands, in addition to buying vinyl from local bands. We also want to do some Etsy type of stuff — sell pottery and art in the store.

“It’s not easy selling records in general,” he adds. “But for us, the flip side to that is we’ve spent a lot of time making sure that if we’re selling new records, we’re not going to do it half-assed. It can be done — double-digit vinyl-sales increases across the board for the last three years. We think we can make it work.”