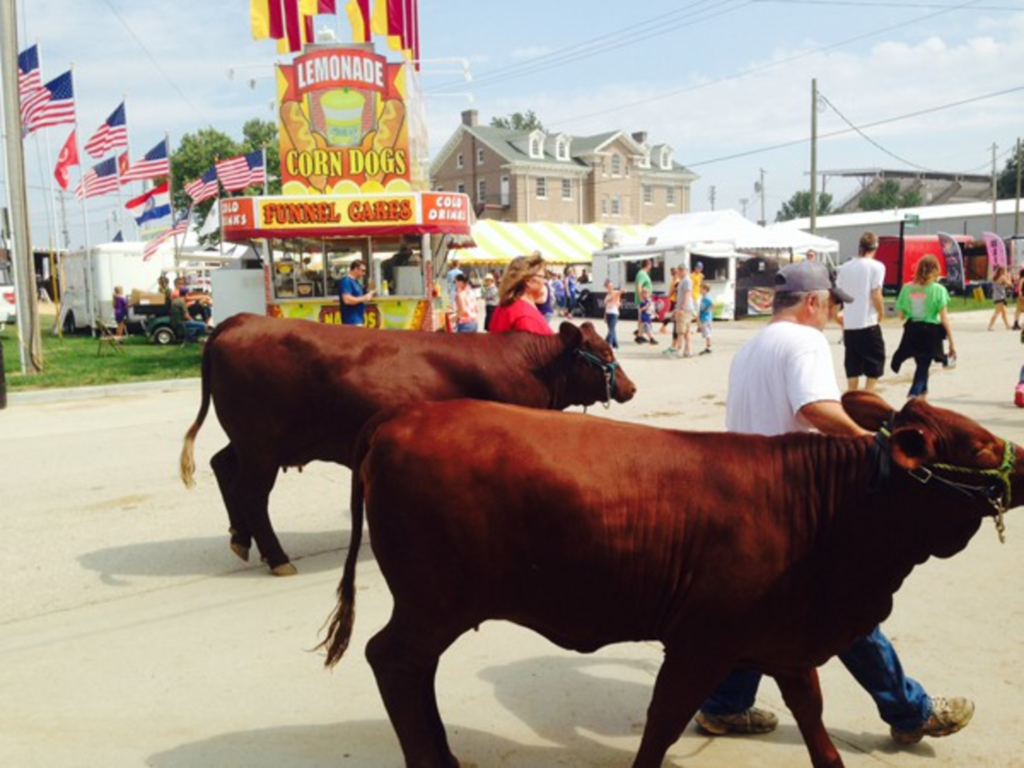 It’s possibly the worst month in the history of the state to proclaim this, but I love Missouri. In particular, I love the middle part of Missouri during the summer. I love the old towns — river towns the most — with their Civil War plaques and deserted downtown squares and highway signposts boasting of homegrown painters and politicians. I love the rolling hills, all tan and green. I love the cows huddled together in the shade under a grove of trees. I love the cicadas screaming at dusk. I love Columbia at any time, but especially during those months when the college students have departed and a gentle camaraderie blooms among the residents who remain. I love the comforting continuity of the Katy Trail. I even love the Lake of the Ozarks, as long as I don’t get in the pissy, shitty, beery water.

Sedalia is harder to love. Overrun with strip malls and fast-food franchises, it is too large to be quaint. The traffic is usually bad on U.S. Highway 50, which bisects the town’s heart. Sedalia’s gross domestic products are impatience and heat.

Yet there is beauty in Sedalia, once you cut through the brush. I did just that on August 16, when I drove an hour and a half southeast from Kansas City for the second-to-last day of the 11-day Missouri State Fair.

I took no personal agenda to the Missouri State Fair, other than to walk around and look at things. By “look at things,” I mean, of course, I was there to look at things to eat, and then eat them.

I indulged in a wide variety of American dishes: a corn dog, an ear of corn, cheese-filled cornmeal on a stick, and several products containing high-fructose corn syrup. I highly recommend deep-fried Oreos with powdered sugar sprinkled on top.

In the agriculture building, I picked up from a vendor a loaf of chocolate-and-peanut-butter-chip bread. It cost $3. A few nights after I’d returned from Sedalia, I went to my neighborhood tavern and drank several beers. When I got home, I sliced up some of this smallish bread and put it in the toaster, where it got stuck. After flirtations with electrocution, I eventually turned the toaster upside-down and emptied all its contents — three years’ worth of bread residue — onto a plate. Onto that carnage I slathered some butter. Some of the bites I forked into my mouth were bad because they contained little bits of English muffins cooked during President Obama’s first term in office. But some of the bites were delicious, and I regret nothing.

In an exhibit hall for vendors, I saw a 4-H club “canstruction” in the shape of Missouri, built from yellow cans of Always Save pinto beans and green cans of corn. Nearby, the Missouri State Beekeepers Association sold bottles of fresh honey and many informative books, my favorite title of which was Hive Management. Also in that exhibit hall, I saw an award-winning, 300-pound pumpkin. It was yellow and had been grown in the Kansas City area — shout-out to Kameron Gall of Liberty!

I would not recommend that future fairgoers pay the dollar required to see the person billed “World’s Smallest Woman.” I am not sure what I thought I was going to see when I turned that corner, but it was not a 60-year-old Haitian woman under a blanket crammed inside a 3-foot-wide wooden box. Given that the sight of “Tiny Tina” — who was very nice, though operating through some kind of haze — still haunts my dreams more than a week later, I can only imagine what effect she had on the poor children who ventured back to her booth. Part of me respects that the Missouri State Fair, by every other measure a fun-loving and kid-friendly event, allowed such darkness into its midst. But mostly I think some kind of regulatory body needs to check and make sure that Tiny Tina is a willing participant in the sideshow.

Concerts closed out most nights of the fair. Some of them interested me: Florida-Georgia Line, Joan Jett, Beatlemania. It was nü-metal on the menu Saturday night, though — a one-two punch of Halestorm and Sevendust. I elected to depart and stay the night an hour away, in Columbia. On the way out, I saw rows and rows of campers and RVs, which stirred in me all kinds of emotions. I’ve been thinking lately about saving up for a mobile living unit of some kind. It also occurred to me that the fairgrounds probably turn into one hell of a party when the sun goes down. Well, maybe next year.