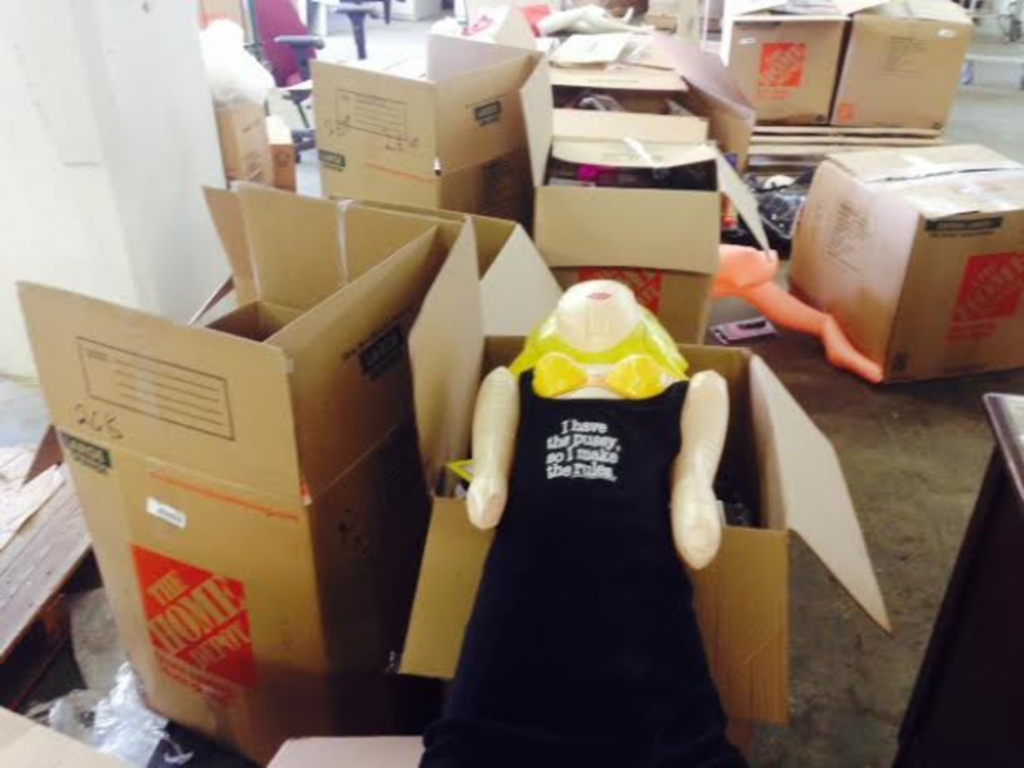 Look north from where the 12th Street Bridge dumps you into the West Bottoms, and you’ll see a trapezoidal brick warehouse. Its occupant is Equip-Bid Auctions, and according to its owner, Andy O’Hanlon, it’s the largest auction company in Kansas City. Equip-Bid typically holds online auctions for entities that are upsizing or downsizing — liquidating a dead restaurant’s kitchen supplies, say, or selling used vehicles for a construction company that’s updating its fleet.

It’s also one of a handful of local companies that has a contract with the Kansas Department of Revenue to auction off property seized by the state. So on Monday, September 29, Equip-Bid opened its warehouse to the public to let interested bidders inspect the recently seized inventory of a Kansas business: Bang, a chain of five adult sex shops whose owner, Larry Minkoff, failed to pay more than $163,000 in sales tax to the state.

That might be stretching things a bit. Kansas’ books are indeed an absolute mess, and there’s a decent chance that Gov. Sam Brownback, whose tax plan blew up the state’s budget, could lose his job next month because of it. But Bang’s tax dodge had nothing to do with Brownback or the freak-show economic experiment he has been conducting in the Sunflower State. A company didn’t pay sales tax, collected on the state’s behalf, so the state seized the company’s property and forced the owner to liquidate his assets in order to repay what was owed. A run-of-the-mill offense, handled sensibly.

I still wanted to get to the West Bottoms, though — not to add another voice to the what-this-says-about-Kansas chorus, but to see just how an auction of vibrators and cock rings even works.

An Equip-Bid employee named James was unloading nonsexual equipment at a dock when I arrived, around 10 a.m. He stopped what he was doing and led me upstairs, to where the porn stock has been kept for more than a month while the Kansas Department of Revenue and Minkoff negotiated. The Bang auction is the biggest that Equip-Bid has ever undertaken, and there were rows and rows of 3-foot-high boxes lining much of the space. Some of the merchandise would be sold in grab-bag fashion: You bid on a box (a “lot”), and the winner takes home a container holding a variety of products: condoms, DVDs, edible underwear, whatever.

Nobody had arrived yet, so I began poking around and flipping open the boxes and taking pictures. James hung around, and we chatted about the sale.

“The ‘sex mischief’ stuff is in high demand,” James told me. “A lot of people have called about it. There was a guy who called who wanted to get everything with an S&M label on it in a lump buy.” (Equip-Bid said no.)

I moved in closer with my phone to snap an artful close-up photo of a butt plug. “I saw a butt plug somewhere in here this big,” he said, and held his hands at the rough circumference of a softball.

I spotted a loose bag of about 20 items called Coco Licious Love Rings — “The Ring Every Girl Wants” — affixed with orange stickers that indicated they had retailed for $38.45 apiece. “Those will probably go for pennies on the dollar,” James said. “I bet somebody will get that whole bag for $40.”

O’Hanlon, a grinning, 40-ish guy, emerged from his office. “Did you see the HBO thing last night?” he asked me.

Equip-Bid’s contracts are commission-based, and O’Hanlon seemed pleased about the events of the past week. The auction had drawn more Web traffic — 24,000 unique visitors to the site in the last week — and more registered bidders than any in the business’s five-and-a-half-year history, thanks to the media’s coverage. Every lot had a bid on it except a few boxes of VHS tapes. Bids so far added up to about $40,000, and that number would rise sharply as the end of the auction neared.

There wasn’t much action, customerwise, so I departed. I swung back by around 3:30 p.m., as the open house was drawing to a close. “You just missed the retirement community,” James said as I entered the warehouse. He told me that 10 elderly people had come to scout out the stock. This was not uncommon, he said. “We talked to a guy who held a similar sex-toy auction down in Florida, and he said the old folks were all over it there, too.”

James estimated that about 40 visitors had come through that day. They’d left their mark. Several inflatable dolls were strewn across the room, and somebody had done a targeted search for MMTs: male masturbating toys. Various items made by a company called Pipedream Extreme Toyz had been exhumed and remained in the open; Pipedream, I can report based on recent observation, apparently specializes in fabricating products that resemble parts of the human body into which a man can stick his penis. The names are not subtle. The Fuck My Face Mega Masturbator is a mold of a woman’s face with an opening at the mouth. The Fuck Me Silly 3 Mega Masturbator (“This mega masturbator is the most realistic and lifelike lower half of a woman ever developed!” reads the box) was here. So was what it had apparently improved upon, the Fuck Me Silly 2 Mega Masturbator, which is basically a torso — no head, no arms, no legs, just two fake breasts and a fake vagina to unfeelingly accept your sad penis.

I asked O’Hanlon if Equip-Bid had ever auctioned another set of lots remotely as interesting as Bang’s supply.

“One time, we did a hospital liquidation, and we sold the cadaver racking, where you put the dead bodies,” he said. “That was kind of weird. But yeah — nothing compared to this week.”