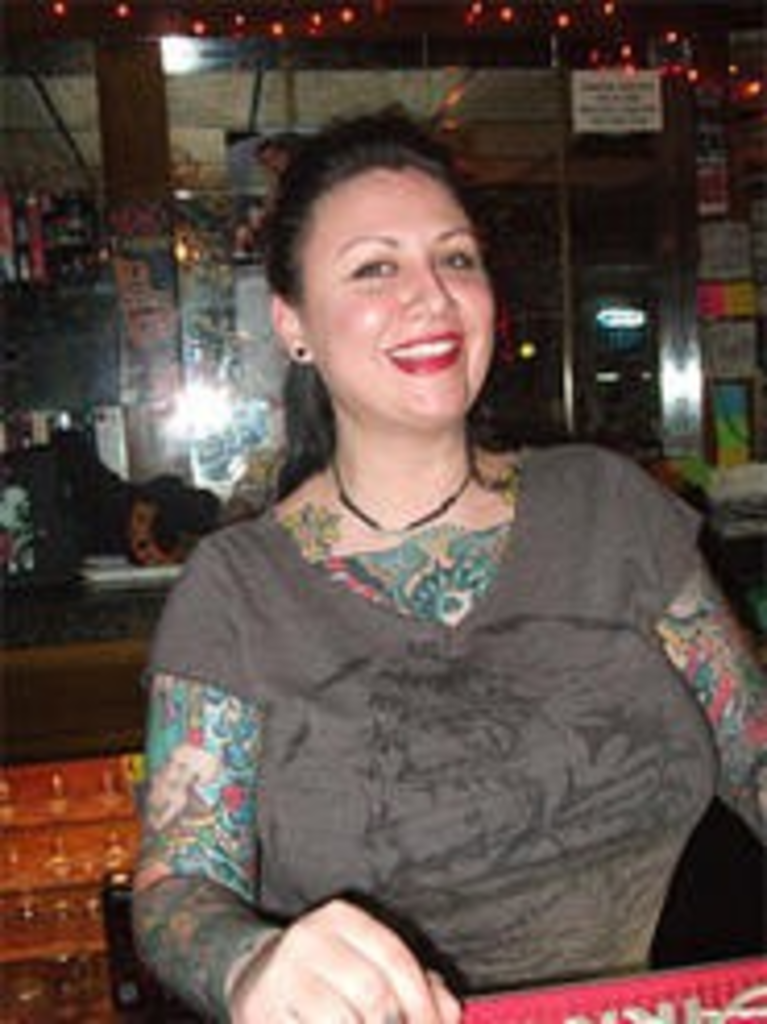 We weren’t sure whether Guitar Hero Night at the 403 Club would be competitive or laid-back, but we brought a ringer, just in case. Research Assistant John owns the PlayStation 2 game, which involves matching the buttons on a toy guitar to the color-coded highway of notes on a TV screen. On a recent Monday night at our new favorite KCK bar, John stepped up to the game console in the corner and slipped the strap of the plastic toy guitar over his shoulder. As the familiar opening of Guns N’ Roses’ “Sweet Child O’ Mine” rang out over the speakers, a grizzled guy at the bar gleefully cackled to no one in particular, “Saddle up, ranger!”

Oh, we saddled up, all right.

Located on Fifth Street in Strawberry Hill, 403 hosts Guitar Hero Night — the best bar game ever — at 8 p.m. every Monday and Wednesday. On Wednesdays, there’s the bonus of karaoke. We wondered whether the karaoke was accompanied by Guitar Hero, which would make for a fantastic — and fantastically annoying — hybrid game. But karaoke and GH coexist peacefully and separately at the 403.

This watering hole rocks. With its wood paneling and drop ceiling, the rectangular interior resembles a ’70s rec room — one with a maximum occupancy of 49. The bar itself is wonderfully padded with sparkly, dark-gold plastic. Smoky, gold-crackled mirrors adorn the wall behind the bar. The floor is covered with a thin, dark-red, leaf-patterned rug. A beefcake calendar and posters for Mercy Seat Tattoo hang behind the bar, as well as a black-and-white photo display of St. John’s Catholic Club.

According to Jessica Delich, the highly tattooed owner, the space has been a bar since the ’40s. Her grandfather was born in the purple house on the hill, and the Croatian flag on the wall proclaims her heritage. When the opportunity came up to buy the bar last summer, she jumped at it.

After ordering $2.50 Bud Light bottles (cash only) with RAs Cece, John and Lexie, we commandeered a high-top table off to the side. Another group, consisting of some heavily tattooed younger folks, gathered at the bar and were very friendly and welcoming. “Hey, did you practice in your bedroom?” they jokingly heckled RA John during his 403 debut performance. Our response: “How did you know?” Then, one guy with black glasses went up and attempted to play the Allman Brothers’ “Jessica” on the expert setting. He managed just a few seconds on the song before getting booed by the machine. On his third attempt, one of his friends shouted some advice.

“That’s what she said,” he responded, as he tried to focus on the notes flying across the screen. He got booed a third time and ended his run. “I hate this fucking song,” he said. Jessica then instituted a ban. “Don’t play it again,” she said. “It’s annoying even when it’s played right.”

Thankfully, the atmosphere of GH wasn’t competitive or assholic. No one hogged the two guitars. So the Night Ranger went up with RA John and attempted the Stray Cats’ “Rock This Town.” The NR took lead guitar, and John handled bass. We managed to get through the song, so we went up again later for Warrant’s “Cherry Pie.” And now we’re addicted.

We weren’t the only ones. We started chatting with 36-year-old Kyle, who sat at the bar and sported long sideburns and slicked-back hair. We asked if he’d rather be a guitar hero, be a jukebox hero or hold out for a hero till the end of the night.

“I’m pretty hooked on Guitar Hero right now,” he responded. He told us that he and Jessica became friends when they worked at the Shady Lady together. She was a waitress, and he was the MC. Because we’d made an anthropological field trip there last summer with some co-workers, we thought we recognized him. The sideburns gave him away. Anyway, speaking of grooming, both he and Jessica started laughing about how one of the dancers tried to shape her eyebrows but accidentally plucked them all and wouldn’t go onstage. “She drew them on for the next six months,” Kyle recalled. “I told her to paint them on at home — ‘Don’t walk in here like that. It freaks me out.'”

A few seats away from Kyle were three people speaking a different language. That’s rare in KC bars, so we were intrigued. We went over and met Scfik, Nada and Admira. They’re from Bosnia and have been friends for 10 years. All three live nearby in the same building.

Nada, an outgoing 34-year-old brunette, told us how she first stumbled across 403. “I had a bad night at work and needed a drink. I wasn’t in the mood to drive, so I came in here.” She and Jessica became good friends, and now, she says, “I’m almost part of the inventory!” She’s more about the Silver Strike Bowling than the Guitar Hero, though. “I’m afraid I’ll get addicted to it. I just cheer and go, Ahhh, you missed. I know every song on it.”

In the midst of all this Hero worship, we met 27-year-old Jim. He was clad in a green T-shirt that depicted a silver blade with a sharklike face and the message “Hey kids! Put me in your enemies!” He was playing the Luddite game of pool with his fiancée, Sarah. He had some strong views about electronic games. Oh, and he was slightly lit.

“I think video games are a tool of enslavement,” he proclaimed. “They’re pushed by the man to hold us down. We get Wii-tarded. It’s not acceptable.”

We feared he might get all Carrie Nation on us and start bashing consoles with an ax. We asked how we could resist the lure of a miniature plastic guitar.

“By not playing them,” he solemnly replied. “With hugs and sarcasm.”

We’re not sure what that last part means, but OK. We can do the sarcasm. But we can’t not play Guitar Hero anymore. It strikes a chord with us, and we’re holding out for it ’til the end of the night.