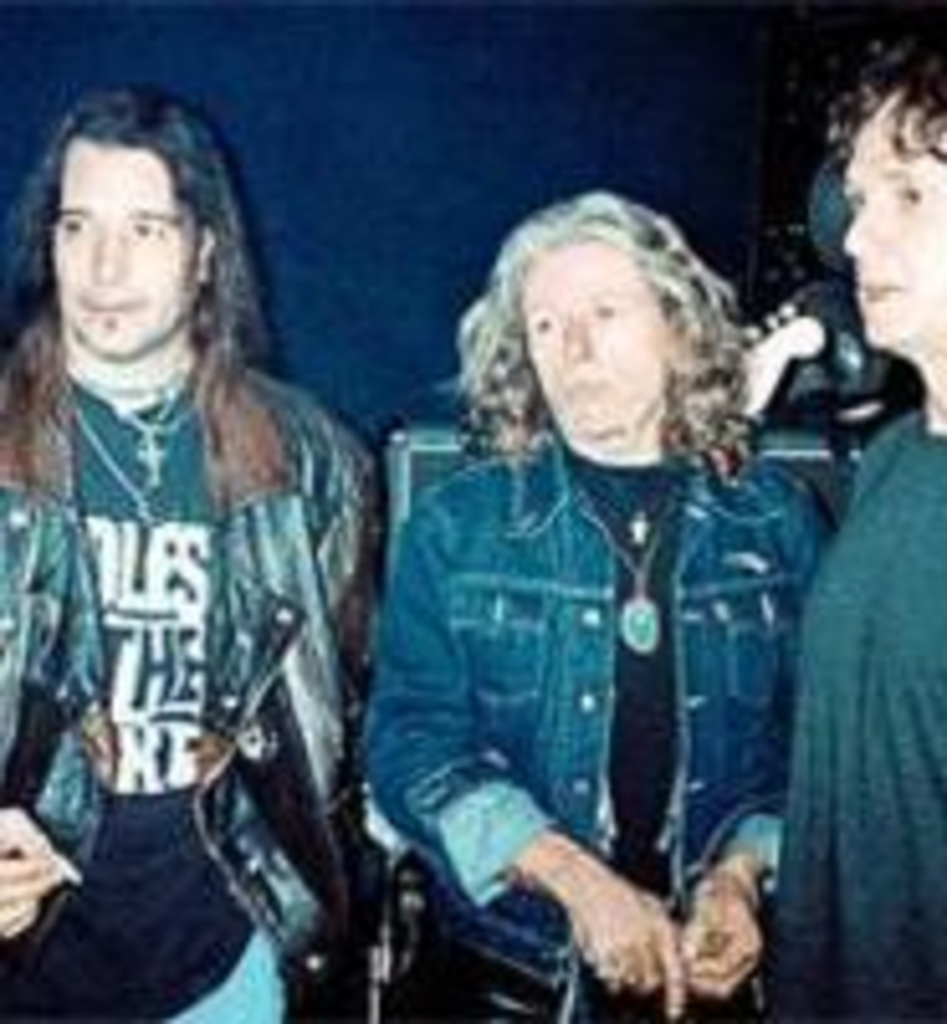 After a quick telephone introduction, the very first thing out of Blue Cheer singer and bassist Dickie Peterson‘s mouth is a song.

“Goin’ to Kansas City!” he bellows. “I love that song. That’s one of the first I learned as a young man.” There’s a pause.

“To be honest with you, my friend, I don’t remember the last time I was in Kansas City. I’m sure I drove through it. I’ve sung songs about it, but I never was there.”

Peterson’s voice, a content, energetic growl, is a natural match for his appearance. His mane of golden-gray locks makes him look positively leonine — dignified, quietly dangerous, ready to match up with younger lions bite for bite — and he makes no bones about his 60 years. “My brother was born in 1942, and he was the last thing my father did before he went to war,” he says matter-of-factly. “I was born in ’46, so I was the first thing he did when he got home. By the time I was 1, I was living on Stanyon and Eighth Street [at the edge of Golden Gate Park in San Francisco].”

Peterson grew up and co-founded the legendary Blue Cheer, a trio of young Haight-Ashbury regulars named after a particularly potent LSD formulation, the kind that even the most weathered souls didn’t mess with. Back then, if you’d been handicapping band futures, Blue Cheer wasn’t one you’d have picked to be blowing people away almost 40 years later. With only one Top 40 hit, a sprawling 1968 version of Eddie Cochran’s “Summertime Blues,” the band was known as huge, fuzzed-up, obnoxious … and louder than anybody else on the planet.

Peterson remembers those times with affection. “Big Brother and the Holding Company, the Jefferson Airplane, the Dead — [whom] we never got along with,” he says. “Quicksilver Messenger Service, the Indian Head Band, the New Salvation Army Band, Oxford Circle, Savage Resurrection, Iggy Pop, MC5,” he continues, counting off. “I’ve been on bills with all those bands many times.”

The key difference: Blue Cheer took the music to the distorted limits of its Marshall stacks — and the number of those amps to the limits of the stage girders. The band’s music was so weird, free-form and abrasive that in one famous San Francisco murder trial, the prosecutor used the fact that the defendant was a Blue Cheer fan to demonstrate the depravity of the accused.

“We got a lot of flak for what we were doing,” Peterson says unapologetically. “There were a lot of people that were angry at us because we were so young. They were older than us, and they’d been busting their chops for a while. Here come these three little dwarves, and we’d come up and shake the rafters.”

The band has been credited with helping to give birth to heavy metal, stoner rock and punk, all supportable claims. “Our whole strategy was — and still is — to make music a physical experience,” Peterson explains. “There’s only one way to experience this band, and that’s live. There’s nothing like feeling that stuff just punch your body.”

With that in mind, Peterson’s description of Blue Cheer’s method is a little surprising. “One of the secrets of our music is to not overplay,” he says. “We’re a power trio. One of the differences between us and heavy metal is the space between our notes.

“I once talked to Muddy Waters in a dressing room,” he recalls, “and for about 20 minutes, I didn’t dare approach him. It was like being in a dressing room with God. Finally, a friend kind of shoved me up there, and I introduced myself. I asked, ‘Could you give me some advice?’ He asks, ‘What you play, boy?’ I said, ‘I play bass.’ He says, ‘Play the spaces. Don’t play too much. You don’t leave the spaces, guitar players are going to hate you.’

“I took this very seriously,” Peterson continues. “Most of the time, guitar players are very happy with what I do because I don’t run over them. I’m part of the canvas. They’re part of the color.”

Blue Cheer’s decades together have been all about the loud, explosive color. “[Drummer] Paul Whaley and I have been together 40 years,” Peterson says. “Duck McDonald’s been with the band for 20 years, and they still call him the new guitar player. I’ve had people ask me, ‘Is [original guitarist] Leigh Stephens coming back?’ I say, ‘Did you just listen to my guitar player? No, he’s not coming back!'”

Their years together have allowed the band to turn old nuggets such as “Parchment Farm” or “Doctor Please,” from Blue Cheer’s classic first album, Vincebus Eruptum, into weird, wonderful 20-minute expanses. “We practice what we call lateral movement,” Peterson says. “When Duck’s going to launch, it’s OK. We’re there.”

Blue Cheer’s audiences, Peterson adds, “don’t expect people our age, from our generation, to get up and do what we do.”

“I see people my age come up, and when they go, ‘Dickie, Dickie!’ I’ll say, ‘You havin’ any flashbacks, man?’ It’s all we got to look forward to now.” He guffaws.

Still, Blue Cheer doesn’t simply redo old stuff for old fans. This tour included a recent stop at the Intonation Music Festival in Chicago, where the band shared the bill with veteran Roky Erickson and newer acts such as the Stills, the Streets and Bloc Party.

“It’s something I’m so proud of,” Peterson says. “I know there’s a generation gap today, just like there always has been, but I’ve seen us bring fathers and their sons, mothers and their daughters, together. Just the other night in New York, there were people of every race and gender, and they were dancing and laughing and having fun.

“This is what the President should be doing — bringing all these people together,” he says, chuckling again. Then he gets a little more serious. “To think that what you’ve always done really makes a difference in somebody’s life … makes me feel like I didn’t waste my life.”

Peterson goes on: “What I’ve learned is that the most important thing in the world is to be honest with yourself. That’s in our music. There’s no smoke and there’s no mirrors. We’re straight ahead honest about what we do. We also know there are people who don’t like what we do. Everybody knows where everybody stands, and that’s honest.”