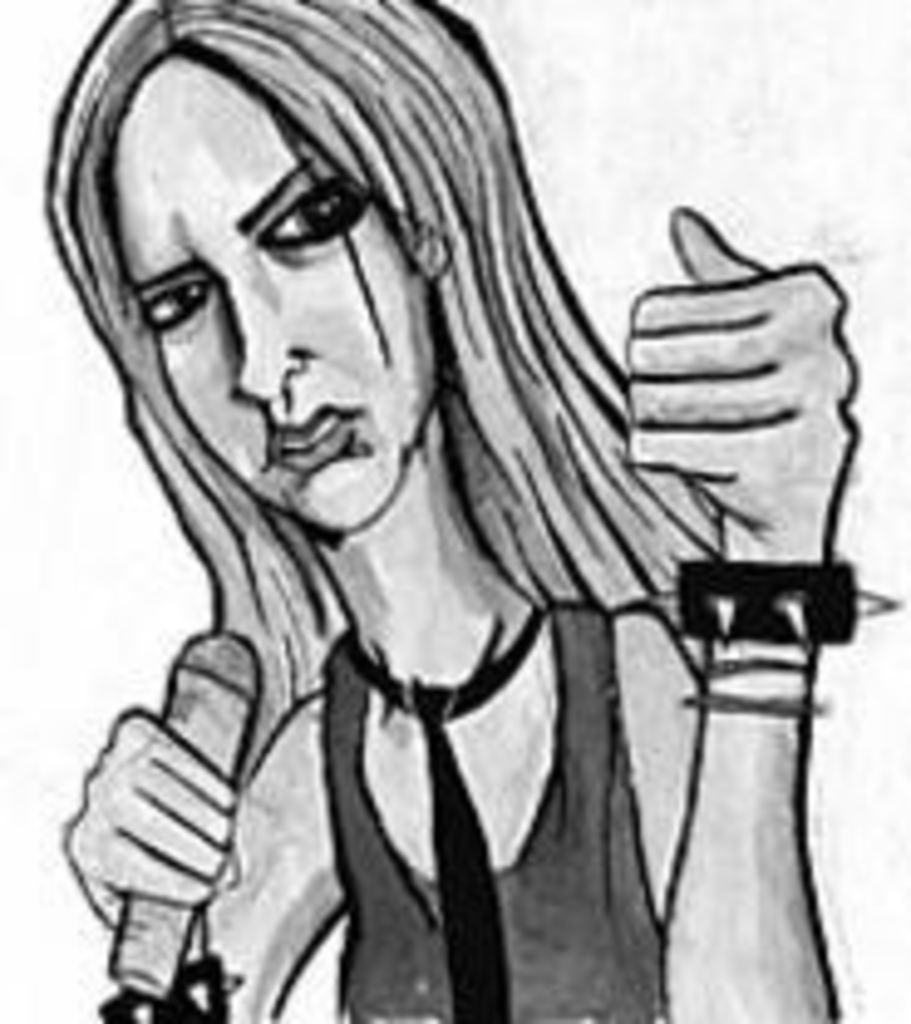 By any measure, Avril Lavigne had a great 2002. She sold millions of copies of Let Go, a clearly Canadian collection of mildly peeved kiss-offs that goes down like Alanis’ little pills without the jagged edges. Her slightly warped tours with a spiky-haired sk8er boi band drew capacity crowds largely composed of punky teen-age girls, like a Lilith Fair sponsored by Hot Topic. She inspired countless young women to raid their fathers’ tie racks and, more important, to pick up guitars and strum their own G-chords. Yet at every photo shoot, her expressions came in three flavors: tight-lipped rage, wide-mouthed mania or teeth-baring rabidity. Why can’t she chill out — what’s she yelling for? The answer is, well, complicated.

Onstage, Lavigne confidently riffs and shouts, a self-assured rock star playing simple but strikingly catchy songs she’s proud to have written herself. In interviews, though, she can be meek. She made the top five in VH-1’s list of the Top 20 women who rocked in 2002, but looked ill at ease during the accompanying interview segment. She made little eye contact, mumbled her replies and seemed remarkably uncomfortable, as though she were being forced to recount a steamy sex scene to her grandparents. Despite all her facial contortions and magazine-article f-bombs, she’s still an eighteen-year-old from a small town whose rise to superstardom was astonishingly quick. Unlike Britney Spears and Christina Aguilera, Lavigne wasn’t raised from Mousketeer age to be ready for her close-up — when the lens gets too close, she defensively shows her fangs or shrinks from its glare.

But just because her erratic composure and tomboy fashion separate her from Spears doesn’t mean she’s the “Anti-Britney,” a dubious tag that, to her credit, she shrugs off vigorously. “It’s stupid,” she told Entertainment Weekly (which nonetheless used the label incessantly in its Lavigne cover story). “She’s a human being,” Lavigne added. “God, leave her alone!” Later in the same piece, she showed peculiarly parental concern for Aguilera, four years her senior. “Poor girl,” she confided after expressing her uniquely precocious so-that’s-how-babies-are-made-yuck! disgust at Aguilera’s “Dirrty” video.

Lavigne doesn’t bare nearly as much flesh as the pop peers for whom she shows such compassion, but she regularly displays the plumber’s plenty — “My butt crack showing is like my trademark,” she told an Ultimate-Guitar.com reporter. In her case, this isn’t a flash for the boys’ benefit, though plenty of pubescent punks surely got their jollies from seeing Lavigne’s half-mast pants at the MuchMusic Awards. She just wears asexual baggy jeans, which immediately sag past her wispy waist and balance precariously on her hips. As for the rest of her uniform, white tank tops have become the upper-half attire of choice for assertive frontwomen — Garbage’s Shirley Manson, No Doubt’s Gwen Stefani, Pink and now Lavigne. The ties aren’t a complex, highly sexualized statement, like some of Madonna’s gender-bender antics, but rather a defiant, anything-boys-can-wear-girls-can-wear-better gesture. Lavigne explained her look in characteristic kidspeak to Rolling Stone: “I want people to watch my video and not be staring at my girl parts.”

Lavigne’s say-anything verve brings to mind Courtney Love, but there’s an important distinction between these quote mines: Love’s “candid” quips are often coldly calculated. And whereas Love displays a Dennis Miller-ish knack for flaunting her intelligence with obscure references, the bratty, chatty Lavigne pleads ignorance regularly. “I don’t like thinking,” she told Rolling Stone. Over the past few months, she’s also admitted that feminism is a foreign concept, requested a definition of inferiority complex and dismissed the Sex Pistols thusly: “Why would I know that stuff? That stuff’s old, right?” That quote, mixed with the fact that Lavigne is often called a “punk,” has wilted a few mohawks, but the problem is one of definition. Lavigne is a punk like Judd Nelson’s Breakfast Club character: a smart-mouthed, too-cool-for-school rebel who baits preps and jocks. She’s not like the T.R. kids in Suburbia, for whom punk is a music form and a lifestyle intertwined.

Lavigne’s music isn’t punk by any stretch of the imagination. At its most vibrant, as on “Sk8r Boi,” it’s propelled at a perky pace, sounding like a less dangerous Elastica or a spayed outtake from the Josie and the Pussycats soundtrack. For the most part, Let Go feels like a teen playing dress-up with adult-contemporary compositions. Lavigne combines jangling guitars and politely insistent choruses with coming-of-age expressions of confusion and outrage — she’s Sheryl Crow without the crow’s feet. A decent singer, serviceable guitarist and often goofy lyricist (I’m not the milk and Cheerios in your spoon, she raps memorably), Lavigne has plenty of potential, but she’ll probably never sound like her pictures look: angry and out-of-control. Instead, she might become the rare singer/songwriter with a built-in fanbase, penning power ballads for an unusual mix of screaming teens and content chaperones.

With Lavigne, Michelle Branch and Vanessa Carlton having broken through in 2002, the question becomes: Are teen-age tomboys singing often-mediocre gentle-rock tunes of their own making preferable to lusty Lolitas performing top-of-the-assembly-line dance-pop tunes? Well, songwriting and a sense of style are the only prerequisites for inclusion in the new class; becoming Britney requires a winning genetic lottery ticket and, possibly, some additional under-the-knife enhancement. And no amount of test marketing can allow middle-aged men to speak fluent teen talk as well as actual eighteen-year-old girls do: What sounds like a more natural statement from a high-school student in 2002: “See you later, skater boy,” or “Oops, I did it again”?

Lavigne might not be a distant younger cousin to Aimee Mann, but she speaks to her listeners as directly as Mann reaches music critics and art-film buffs. Concertgoers who check out Lavigne’s show at Memorial Hall will observe something strange: pop fans who really believe their idol is “one of us.” And on stage, they’ll see something they can witness only in person, where Lavigne is completely in her element: her rare yet winning smile.