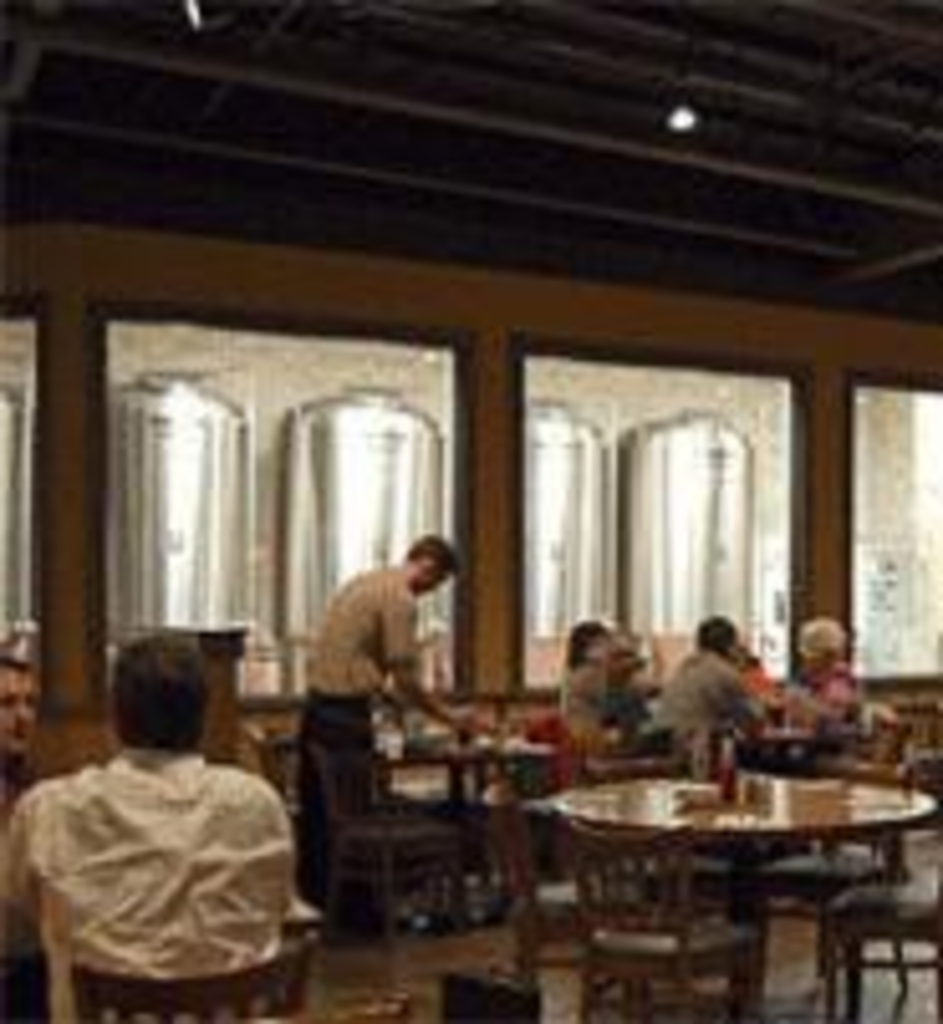 One of my favorite classic Saturday Night Live commercial parodies has two housewives arguing over a new consumer product called Shimmer. One woman insists that it’s a floor wax; the other screams that it’s a whipped dessert topping. Suddenly Dan Aykroyd appears as the product pitchman and answers the question by explaining, “Shimmer is a floor wax and a dessert topping.”

The loud and lively new Granite City Food & Brewery is the culinary version of Shimmer: Is it a brewery that also serves food? Or is it a noisy, casual restaurant with house-brewed beers and a modestly priced menu of bar food? If you think that I’m taking a wild leap comparing the newest outpost of the Minneapolis-based dining chain with a Saturday Night Live sketch, let me fill you in on Granite City’s patented brewing process, “Fermentus Interruptus.” No, I’m not making that up. It’s right there on the corporate Web site: “Fermentus Interruptus … will make micro brewing for multiple locations more efficient.”

But back to the shimmering Granite City. The four-month-old Northland location in Zona Rosa has been designed to look like an upscale lodge, with limestone pillars, tile floors and comfortable booths. It’s staffed with attractive young servers. Some are more attractive than others; one waiter looked like Jake Gyllenhaal, and another looked just like recent Oscar-winner Philip Seymour Hoffman. That wasn’t his fault, though, and he did say something really funny about the buffalo chicken wings that made my friend Lou Jane laugh.

I didn’t hear what he said, because the deafening, percussive beat of the sound system had rendered me temporarily stunned. It was so loud in the main dining room (where hard surfaces abound) that I couldn’t quite figure out what the hell was playing. Hip-hop? Hard rock? Heavy metal? At one point, I could have sworn that I heard the strains of Kool & the Gang’s 1983 hit “Get Down on It.”

“Well, it’s not a place for intimate conversation,” Lou Jane yelled across the table.

“A place for what?” asked Bob, pretending to cup a hand over his ear while he perused the menu.

The Granite City menu is far more interesting than the music … and easier to understand. Like most corporate casual-dining joints of recent vintage (the first Granite City operation opened in 1999), it’s a multinational collection of dishes: wontons and quesadillas, Asian chicken salad and Tuscan shrimp fettuccine, Cuban sandwiches and London broil. There’s even French onion soup.

Maybe because the clientele is strictly suburban, the servers have been trained to push the real common-denominator stuff. On both of my visits, the meal began with the same mantra: “So, would you like to start with some of our great spinach-and-artichoke dip?”

I’m so sick of that particular concoction, I’d eat Shimmer first. So Lou Jane decided that we should share the Monterey crab wontons and the Buffalo chicken wings. The six puffy triangles looked airy enough, but the fried wonton wrappers were chewy. Still, to my amazement, each was filled with plenty of crabmeat and barely any cream cheese or Monterey Jack. Lou Jane and Bob loved the meaty, spicy — but not fiery — chicken wings and slathered the crispy, saucey drumettes with blue-cheese dressing before devouring them.

While we waited for dinner, I regaled my companions with a story that a co-worker had told me about his visit to this very Granite City. He had stopped in for a quick lunch at the bar on the way to pick up someone at the airport, and he found himself surrounded by mostly older couples (“All getting completely sloshed and having a grand time,” he told me). He thought his burger tasted prepackaged but enjoyed the waffle-cut fries — until one little old lady came over to him, grabbed one of his fries and said, “You mind if I have one of these, sweetheart?” then dipped the waffle fry in his ketchup.

“That may be her right over there,” Lou Jane said, pointing a chicken wing in the direction of an animated geriatric in a nearby booth who was simultaneously gabbing, slugging a vodka stinger and stuffing ravioli into her mouth. I made a mental note to keep an eye on her. If she grabbed anything off my plate, I’d punch the old bitch.

No one could have touched my dinner plate, as it turned out, without losing a finger. I ate my fried walleye dinner so fast, even I was surprised. It was a delicious hunk of flaky freshwater fish hidden under a crunchy golden crust of fried batter and served with a big mound of those waffle fries (which I plunked into Granite City’s sour-cream-based dipping sauce). Bob gave thumbs up to his meal, a pair of moist, boneless pork chops glazed with a shiny, bourbon-splashed barbecue sauce. “They’re delicious,” he announced.

Poor Lou Jane had believed our server when he praised one of the brewery’s “signature selections,” a home-style meatloaf “charbroiled and served open-faced on grilled ciabatta,” according to the menu. It was a thick ol’ slice of well-done something (and clearly not baked in a loaf pan) with artful grill marks on the surface, but it was totally tasteless. “I’m not convinced it’s made of meat,” Lou Jane said as she poked the slab with her fork. I took my own taste of the spongy product; it was firm and flexible enough that I could have doused it with Comet and scrubbed my sink with it. It’s a cleansing tool. It’s a meatloaf. No, it’s both!

The caramel-apple crumble was a brighter note for a finale. It wasn’t really a “crumble” but rather an apple-filled, free-standing construction of flaky puff pastry drizzled with caramel syrup in a sort of Jackson Pollock motif. “I did the caramel sauce myself,” our waiter said proudly. You go, Picasso.

I returned on a Sunday afternoon with Bob and Ned. We arrived too late for the Sunday brunch, so instead we climbed into a booth in the busy lounge, facing the bar (which had a little hot pickup action going on). It was a cold day, so Bob and I warmed ourselves with Granite City’s fine, creamy ale-and-cheddar soup. Ned ordered the French onion, which came blanketed with melted provolone cheese. “But it’s served with saltine crackers,” Ned complained. “They serve decent bread and warm breadsticks with other dishes here. Why are they so stingy with the soups?”

The pasta dishes were sided with those very garlic-butter breadsticks that Ned coveted. Bob ordered the four-cheese sausage rigatoni — which was excellent — a portion so generous that by the time he ate the breadstick and half the pasta, he was full. Ned got over his saltine snit after lunching lavishly on a trio of puck-sized crabmeat-and-cheddar cakes, accompanied by a traditional cocktail sauce (with barely a hint of horseradish) and a tastier pesto concoction.

I was pleasantly surprised by Granite City’s version of a Cubano sandwich, made with thin-sliced pork loin and Swiss cheese but with smoked turkey in place of the traditional ham. Instead of the toasted, crusty roll that one associates with a Cuban sandwich, this restaurant piles the ingredients on a fluffy, flour-dusted slab of ciabatta — more like a fancy hoagie that anything one finds in Miami, but damned good.

Bob was miffed when, halfway through our lunch, the waitress started chatting up the dessert list. “It’s like we’re being rushed out of here,” he said. Still, her spiel about the triple-chocolate cake caught our attention. “It’s made right here,” she insisted.

I bet it isn’t. The layers of white and chocolate cake, each iced with a luscious butter-cream frosting and topped with chocolate fudge, had that factory-perfect appearance. “But it tastes wonderful,” Ned said. “There’s real whipped cream on top of it, not that fake commercial dessert topping.” And damned if it wasn’t.

OK, so the whipped cream is real, but I’m not sure that Granite City Food & Brewery isn’t trying to be too many things at once. The question is … what the hell is it?