Stockyards Brewing Co. opens in the former Golden Ox space; plus, a week of beer events 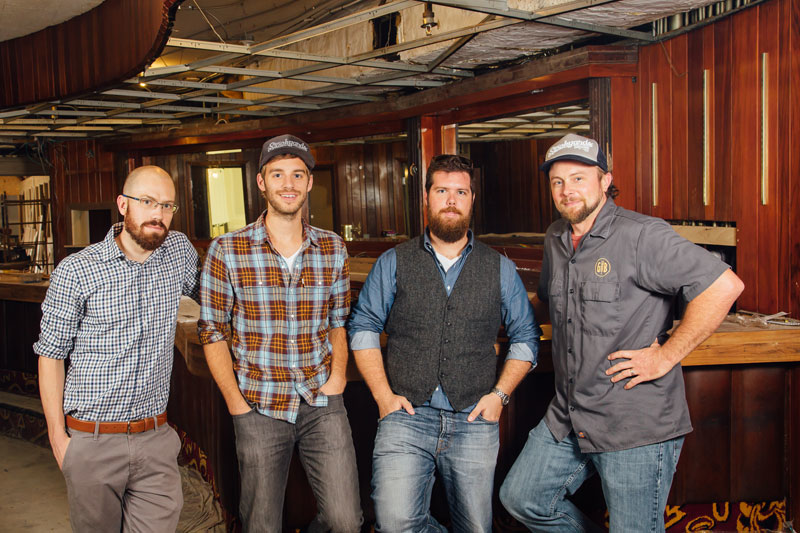 As one brewery starts its farewell tour, another opens its doors.

May 15, KC says goodbye to 75th Street Brewery, a starting point for several local brewers, after 23 years. But we already have a new brewery to frequent.

Stockyards Brewing Co. opened last Friday in the bar that once belonged to iconic West Bottoms steakhouse the Golden Ox, at 1600 Genessee. It arrives with a great atmosphere and three of its own beers:

Thunder Hef (4.8 percent ABV): This hefeweizen was the first beer brewed on Stockyards’ new system. It’s what you’d expect in a wheat beer, and the banana and clove characters aren’t overpowering.

“We didn’t do it on purpose, but we kind of led off with three golden pale beers,” says brewmaster Micah Weichert. “With the Golden Ox history, it seems appropriate. We will have beers of other color eventually.”

Stockyards owner Greg Bland says Stockyards is still deciding which beers will join Thunder Hef and Golden Alt as flagship beers. (The farmhouse may stick around, too, depending on how it sells.)

Coming soon to Stockyards’ taps will be a black IPA (maybe by this weekend), with New Zealand pacific jade hops, and a brunch stout. Bland says his vision is to have six to eight of his beers on tap at all times (four flagships and two to four rotating brews).

Stockyards opens Wednesdays and Thursdays from 4 to 11 p.m. Fridays and Saturdays the brewery opens at noon and stays open until midnight, and the brewery is open noon to 8 p.m. Sundays. Each beer goes for $6, with 32-ounce growler fills costing $13 ($8 for a refill).

“I’m completely scared of running out of beer right at the beginning,” Weichert admits.

“That’s one thing that we absolutely don’t want to do,” Bland says. “I know Kansas City is a pretty thirsty town.” To help out, he has reserved some guest taps for Cinder Block, Martin City, Crane and a few other locals. “Once we start making more beer and have more of our beers on tap, we’ll start slimming down our guest taps,” he says. “We always want to showcase a couple of other breweries and see what they’re doing around the city.”

Stockyards is also brewing a couple of times a week to keep the taps flowing.

Also of note, Weichert is joining Stockyards as a full-time brewmaster. He’s splitting time between Stockyards and the downtown Gordon Biersch, but his replacement is on the way from Arizona.

“As time has gone on, I’ve come to believe more in the dream here and kind of fall in love with the idea and the whole plan and the project too,” says Weichert, who was initially hired as a consultant. “There are some things that they can offer me that Gordon Biersch won’t be able to offer me ever, like family-run business and more community involvement and stuff. I’ve just fallen in love with the vision here.”

Joining Stockyards full time hasn’t changed Weichert’s dream of opening his own brewery, Mankind. “Greg believes in that dream as I believe in his dream,” he says.

Bland concurs: “I’m just as excited for Mankind as I think the rest of Kansas City will be, too.”

Stockyards puts on its first-ever event from 6:30 to 9:30 p.m. Thursday, April 21: a KCUR 89.3 Generation Listen night called Stockyard Sounds. Think NPR’s Tiny Desk Concert series, but local, with acoustic performances by Chico Sierra, Doby Watson and Destroy Nate Allen. Besides the music, the $10 ticket provides a good chance to see Stockyards’ event space in the back of the brewery.

Thursday 4.21
It’s still Kansas Craft Beer Week. Jump on the pub crawl through KCK’s Strawberry Hill and try a couple of exclusive Tallgrass beers (Blackberry Pub Ale and Tropical Elbow Drop). Where? That’s TBD, but make sure you take quarters for pinball at the 403 Club.

The next beer social at Pinstripes (13500 Nall, Overland Park) features Martin City Brewing Co. Drink some Belgian beers and roll some balls from 3:30 to 6:30 p.m.

Free State takes over the taps at Red Lyon Tavern (944 Massachusetts, Lawrence) from 7 to 9 p.m.

Get a limited-edition pint glass at Red Crow Brewing Co. (20561 South Lone Elm Road, Spring Hill) as part of Firkin Friday’s Pour & Pint Special from noon to 10 p.m. The Twisted Asian food truck will be there from 5 to 9 p.m.

75th Street mug-club members, go fill your cup at the brewery (520 West 75th Street) and get free appetizers during happy hour at 4 p.m. You gotta be a member.

Trade your glass in at the Flying Saucer  (101 East 13th Street) for either extra fire sales on beer or food specials. It’s part of an Earth Day event with Ripple Glass.

Keep an eye out for the Free State beer tent at the downtown shot put event at Seventh and Massachusetts in Lawrence, starting at 6 p.m.

Red Crow Brewing Co. (20561 South Lone Elm Road, Spring Hill) turns its taps over to other Kansas breweries from noon to 10 p.m. Look for giveaways, games and Monk’s Roast Beef (from 5 to 9 p.m.)

Who doesn’t like cheap beer? 75th Street Brewery (520 West 75th Street) is going out with 75-cent pints of its flagship beers in the alley.

Sample some of Martin City Brewing Co.’s barrel-aged beers from 2 to 5 p.m. at On the Rocks (1818 Massachusetts, Lawrence). Then head over to John Brown’s Underground (7 East Seventh Street, Lawrence) for an MCBC tap takeover with Big Boy Bourbon Barrel-Aged Imperial Stout, Banging the Enemy Red IPA and Belgian Blond from 7 to 9 p.m.

Martin City beers will be on tap during trivia night at Lew’s Grill & Bar (7539 Wornall), starting at 8 p.m.

The Westport Ale House (4128 Broadway) throws a Leukemia Lymphoma Society benefit for Eric Walling’s man-of-the-year campaign. Look for Avery Uncle Jacob’s Stout on tap at 7 p.m. Buy the beer or make a $5 donation and you’ll get a raffle ticket for a chance to win Avery gear, gift cards, Royals tickets or an autographed KU basketball.