Stockholm, a stranger-than-fiction story that keeps the energy level high 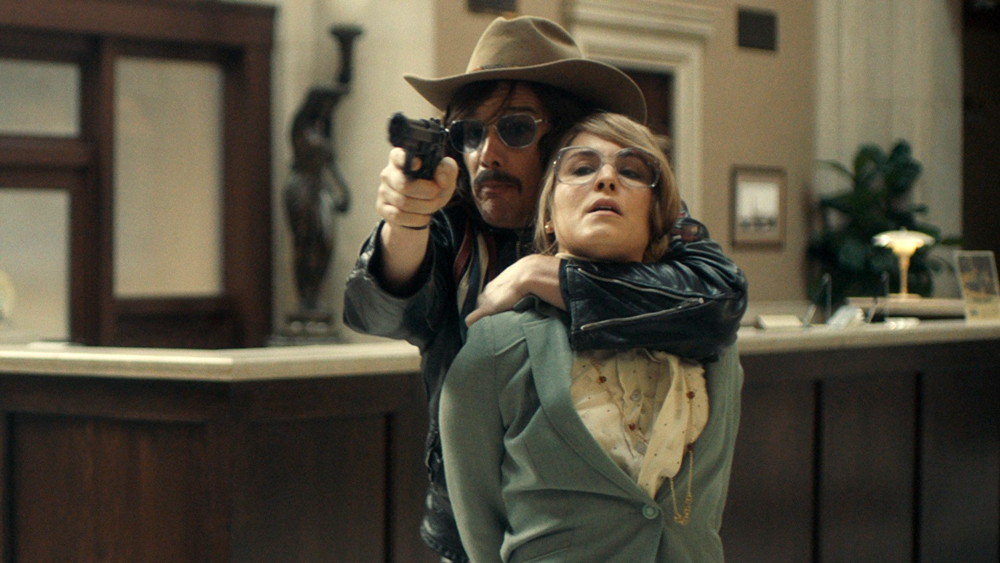 With his scraggly long-hair wig, American-flag-tinged black leather jacket, and dark sunglasses, the man who calls himself “The Outlaw” takes hostages during a 1973 bank heist in Sweden. He asks for two guns, the release of his jailed friend Gunnar Sorensson (Mark Strong), $1 million U.S. dollars, and a very specific getaway car: a Mustang 302, just like the one Steve McQueen drove in Bullitt.

Even though the new movie Stockholm claims in the opening scenes to be “based on an absurd but true story,” it quickly becomes clear that there will be creative liberties taken with its telling, starting with the casting of Ethan Hawke as an American cowboy criminal rather than the Swedish man who committed the actual crime that inspired the term “Stockholm syndrome.” Still, telling the audience in the opening frames that the story is based on fact does give it an extra kick. Stockholm positions itself in the same self-parody vein of I, Tonya, in that it embraces its stranger-than-fiction story and keeps the energy level high.

Noomi Rapace plays Bianca Lind, a married woman who is taken hostage and begins to see Hawke’s Lars Nystrom as a liberator of sorts. Anyone who understands the appeal of bad boys will see Bianca’s attraction toward Lars slowly building — despite the fact that his confidence is often misplaced, and the script takes a broadly comic tone that depicts Lars as in way over his head. You’d be forgiven for noticing the similarities between this story and the 1975 tragicomic masterpiece Dog Day Afternoon. Stockholm seems to be constantly riffing off of it, though it never develops as solid an emotional connection with its characters.

One place where Stockholm diverts quite successfully from Dog Day is on the other side of the hostage situation. Since this was the first criminal event covered on live Swedish TV, the methods of the police force and prime minister are on display for the country to see, unfolding in real time. Christopher Heyerdahl (The Swede from AMC’s Hell on Wheels) is perfect as Chief Mattson, who employs aggressive tactics and doesn’t understand how police actions could be misperceived by a wider audience. He is shocked that anyone would root for a brazen dumbass like Lars, and he doesn’t have the capacity for managing a crisis being watched by the entire country.

Many of the plot twists and more absurd parts of Stockholm go down roughly the same as they did in real life, and writer-director Robert Budreau (who teamed with Hawke previously in the perfectly calibrated Chet Baker biopic Born to Be Blue) makes full use of the preposterousness of each situation. In at least one instance, the film doesn’t go far enough: After it was all over, the real captor and hostage became family friends.

There are allusions to Bianca’s marriage being solid (if lifeless), and Hawke and Rapace develop a genuine connection. That may spring at least partially from going through a traumatic event together, but it also may be an identification of each other’s inherent loneliness. Few actors do quiet desperation quite as effectively as Hawke, and his performance anchors the movie in that feeling, making Stockholm an entertaining flick that works on a couple different levels, even if there’s not a big, overarching theme.