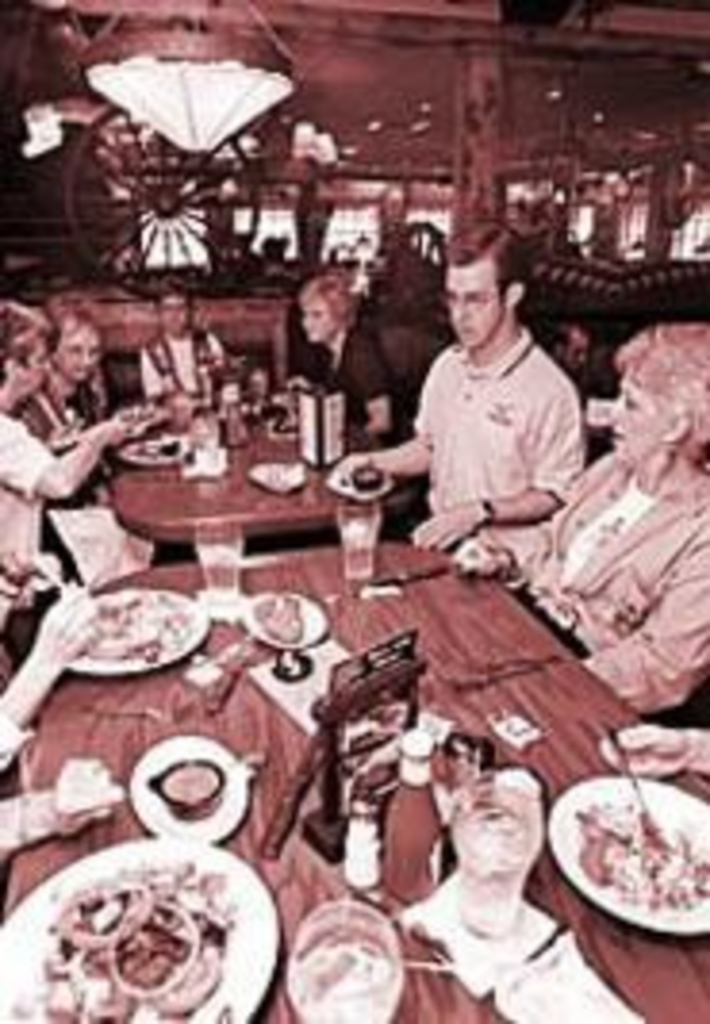 The opposite of mad cow disease appears to be infecting the brains of some restaurant owners around town. It’s not exactly a disease, but rather an obsession: to open as many new steak restaurants as possible in an area that’s already saturated with them. For example, the upscale Capital Grille, part of the Atlanta-based Rare Hospitality Inc. restaurant group, is scheduled to open one of its top-of-the-line steakhouses on the Plaza in February — just a couple of blocks from the equally pricey Plaza III and Ruth’s Chris Steakhouse.

And on the Kansas side, another Rare Hospitality concept — the much less expensive, less glamorous LongHorn Steakhouse — is celebrating its first month in a Leawood shopping center that’s within easy walking distance of Hereford House, Yahooz, and the similar-sounding Lone Star Steakhouse & Saloon.

Don’t get me wrong. I don’t have a beef with more alternatives to the reigning steakhouses. But we haven’t heard this kind of cattle call since the 1970s, when the city was glutted with low-price, no-frills “family” steak restaurants, such as Ponderosa and Western Sizzlin’. The LongHorn Steakhouse is several cuts above the budget beef joints, but like its biggest competitor, the Texas-based Outback Steakhouse, there’s a formulaic, prepackaged feel to the concept and the menu. The conceit of the place is that it’s an old cowboy roadhouse, complete with loud country music, neon beer signs, and various cowpoke-type gee-gaws strewn all over the place. But it no more has the feel of an actual roadhouse than an episode of Gunsmoke evokes real life on the 19th-century prairie. It would have helped if this newest local LongHorn Steakhouse (there’s already one in Independence) had started with the saucy pizzazz of the chain’s first one — in an Atlanta building that once housed an adult bookstore, according to manager Jeff Lang. But this restaurant’s owners picked a free-standing suburban building (where Tony Roma’s and Li’l Rizzo’s spent their short Leawood lives) and, after a massive renovation, opened a boot-kickin’ quasi-roadhouse right next to a tidy Hallmark shop.

The menu, however, is shrewdly designed with the unsophisticated diner in mind. Nothing too spicy, nothing too ethnic, nothing too creative.

The appetizers have been inspired either by diner staples (french fries doused in chili and melted cheese, a tomato-and-onion salad) or by the stuff served at other chain steakhouses. The Outback has its much-publicized fried onion specialty, and the LongHorn, not to be outdone, has the Texas Tonion: petals of sweet Spanish onion dipped in a heavy batter, deep-fried, and dusted with a peppery paprika- and cayenne-based concoction they call “prairie dust.” That dust made for an intoxicating experience, especially when we dipped the petals in the mayonnaise-based sauce that came along for the ride, spurred on by garlic, a splash of tomato paste, and a hint of those prairie dust spices. There’s also a grilled shrimp appetizer described on the menu as “seasoned with zesty spices,” although the skinny things were so unzesty that the accompanying cocktail sauce, loaded with horseradish, was a welcome relief.

When my friend Bob saw the table tent with the color photographs of two featured steaks, a Kansas City strip grilled with a peppercorn crust and a filet topped with a layer of melted blue cheese, he asked our server, “Can I get the blue cheese crust from the filet on top of the Seven Pepper Strip?”

To my amazement, the server agreed. He had seemed just the type of young waiter to snap, “No substitutions” (and later did, but that’s another story). The resulting concoction was pretty wonderful, I have to say, although I told Bob I doubted any other customer would ever request the same innovation. That was the night I ordered a slab of medium prime rib, which arrived pink and warm and surprisingly bland. Maybe I should have ordered it as the menu dared: “If you’re bold enough, ask for it with Cajun spices.” But by that point I was already so full of prairie dust that I could have flown to the Flint Hills.

My friend Dennis ordered the Texas Tequila Chicken, a basic grilled breast splashed with a tart lime sauce, vaguely flavored with tequila, and topped with a blanket of chopped peppers, onions, mushrooms, tomatoes, and melted cheese. This dinner came with “garden-patch” vegetables, a perfectly ordinary medley of carrots, zucchini, and broccoli in a buttery sauce. “I knew I should have ordered ribs,” Dennis muttered, sawing through the chicken breast with no enthusiasm. And he should have: On a later visit I enjoyed the restaurant’s fork-tender baby back ribs, meaty and drenched in a slightly sweet, tangy sauce. And the Canadian King Salmon fillet, marinated in soy, garlic, and a splash of bourbon, was a bit crusty and dry on one visit and perfectly grilled and luscious on another.

On each of my visits, I noticed that the LongHorn’s dining room had attracted a predominantly middle-age clientele who quietly pored over the menu in bifocals. The serving staff, on the other hand, was as fresh-faced as the cast of TV’s Malcolm in the Middle, with only a few exceptions (I recognized one veteran waitress who had come from slinging hash in a downtown diner). Dressed in T-shirts, jeans, and the occasional cowboy hat and bandanna, these kids had been lured to the new restaurant, Lang said, with signing bonuses.

That’s how competitive today’s market for servers is. But all the signing bonuses in the west can’t turn an inexperienced high school graduate into a good server, and LongHorn has more than its share of greenhorns on the floor. That includes one startlingly dense young man who turned a mediocre dinner into a hilarious comedy of errors. He brought our bread somewhere between the main entree and dessert, and when I asked him if the desserts were prepared in the restaurant’s kitchen (they aren’t, by the way), he announced, rather haughtily: “Yes, but they’re already made. There are no substitutions.”

Substitutions? What did he think I was going to do, ask for the Key lime pie’s raspberry sauce to be poured on the Hot Fudge Brownie Deluxe? That might have improved the latter, by the way. After extolling the virtues of the hot brownie topped with vanilla bean ice cream and “smothered in hot fudge,” the waiter seemed thrilled that we ordered it — only to return a few minutes later to inform us that the restaurant was “out of ice cream.”

“There’s a grocery store just across the parking lot,” said Bob. “Send a manager to go get some.”

The waiter looked horrified. He dashed off and returned with a naked brownie and a slab of a defrosted but still relatively tasty Key lime pie. On another visit, I sampled a crusty, hot, and divine cobbler made with tart apples and raspberries. It even came with ice cream.

Despite the wine list on the menu, with that ever-popular White Zinfandel leading the 15 selections of inexpensive vintages, most of the patrons were drinking ice-cold domestic longnecks with their beef. Which is just what you’re supposed to do in a cookie-cutter steakhouse where the cowboy-hat-wearing waiters have never ridden a horse and, on the way to the rest rooms, there’s a framed photo of Bing Crosby wearing cowboy duds.