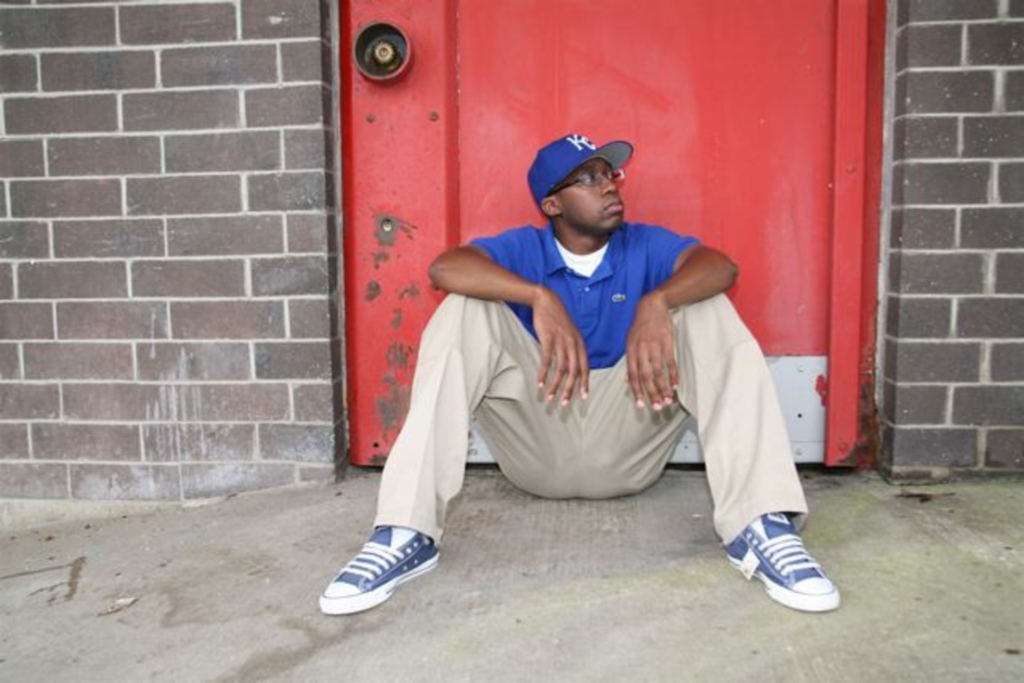 John Westbrook Jr., a 25-year-old rapper known as Stik Figa, recently totaled his car. He’s unemployed. And yet, he’s happy. On a recent weekday, Westbrook’s contagious laughter fills the interior of a fast-food joint thicker than the smell of fresh french fries.

We’re at Max’s Hamburgers and Gyros on Wornall so that Westbrook can tell me about his upcoming solo album, Twentyfourseven, produced by Leonard Dstroy. But the conversation strays all over the place, from Ice-T’s wife, Coco (“She’s like a female impersonator”), to what would happen if the movie Superbad were recast with black actors.

I laugh so hard, my face hurts.

We’re meeting at Max’s because it reminds Westbrook of a burger joint in Topeka, where he lives, called Harold’s Prize Package.

“Ain’t nothin’ special,” he says. “It’s in a spot that people don’t go to at night. But during the day, it amazes me how many people from the other side of town still come out to it during their lunch breaks, because it’s that good. I think places like this are kinda like my philosophy on music and how I’m dealing with it.”

People like Harold’s Prize Package for the same reasons that they like hip-hop, Westbrook says. “It’s, like, from the other side of the tracks. Generally, people are afraid to go to that part of town, but we’re telling you stories about what it’s like on the other side. It’s got a reputation, but you still gotta get the music.”

But these days, rappers want to be more like McDonald’s than Harold’s, he explains, continuing the fast-food analogy. “The more people get into doing it [hip-hop] via the Internet, MySpace, it stops being special at a certain point. It starts kind of blending together,” he says. “I just want my stuff to be representative of when people took pride in crafting it. I’m kind of content in being the best something and providing the best product, even if it ain’t bringin’ in a million people.”

Westbrook peppers the conversation with pauses as he devours a gyro with the carefree intensity of a skinny guy blessed with a high metabolism. Which is, of course, how Stik Figa got his name. One day, at his parents’ house in Topeka, he was doing chores without a shirt on.

“What do you call those things you draw when you’re playing hangman?” his mother asked him.

“Yeah, you look like a stick figure,” his mom said.

He adopted the moniker as a joke. It’s not his aim, but Westbrook could have a comic career if he wanted one. He brims with impressions: of the racist Wal-Mart customers he used to ring up; of Kanye West (“Ay, ay, fam, you disrespeckin’ me, fam!”); and of his dad, who speaks in a Bernie Mac bass and calls Westbrook by his family nickname, Pookey.

Westbrook doesn’t curse in his music — he says it’s because he’d rather not be censored if his songs make it onto the radio. It also might be a lesson left from his Jehovah’s Witness upbringing and his strict parents. When he first started trying to write rap music as a teenager, he emulated the Geto Boys and Too Short tapes that played in his uncle’s car. That didn’t go over well.

“First rap I wrote was like, I don’t give a fuck about a bitch, run up in the mmm with the click, mmm-mm in the crib, pistol on my waist, just hardcore shit,” Westbrook recalls. “I wasn’t doin’ none of that. Because it doesn’t come off as well to go, Beat the third level of Mario, nigga … I got the cold Sonic the Hedgehog, up, down, up, down, A, B, start! I wrote it [the hardcore verse], and I put it in my pocket, and my moms was washing my pants and she found it. She was like, ‘Pookey!‘

“Yeah,” he continues. “My relationship with rap had always been kind of a secretive one, till I got older.”

But as the seven tracks on Twentyfourseven prove, Westbrook’s secret is out. Lenny D’s crisp beats over cascading piano plunks and soul samples put a solid backbone behind Westbrook’s twangy delivery. The catchiest song on the EP is the album’s namesake, “Twentyfourseven.” It features singer Reggie B on the hook and a gently infectious guitar strum in the beat. It’s the song in which Westbrook calls his music “Richard Pryor rap” — a description that’s more than apt.

On the song “Groundhog Day,” Westbrook bemoans his financial situation in a chorus that goes, I got holes in my shoes/Baby’s on the way/Five dollars to my name/Ridin’ on a quarter tank/Rent comin’ up soon/Where I can’t afford to stay/So it’s lookin’ like to me it’s gonna be that sort of day.

And yet, he’s still smiling.