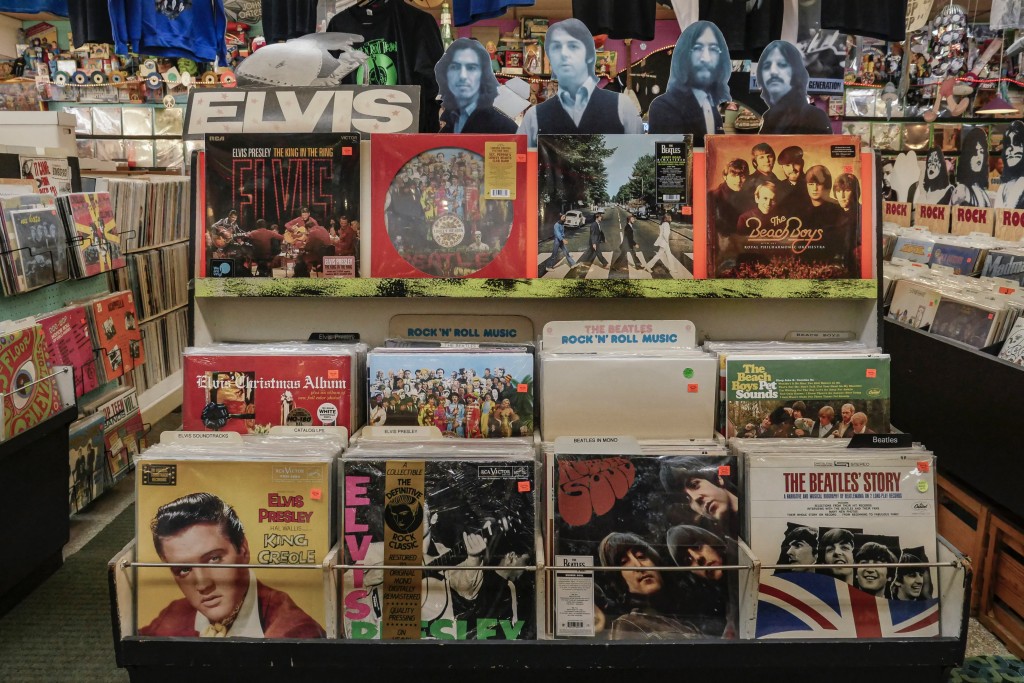 Lifelong educator Steve Lopes has turned his passion for researching the history of rock and roll music into a series of courses offered by KU’s Osher Institute.

It all started when the retiree, former teacher, and Kansas NEA Organizer enrolled in an Osher course on the history of rock and roll in the spring of 2018.

“It was being taught by a young guy in his thirties. He didn’t do a terrible job, but he’d completely ignored the 50s and skipped to the 60s. I contacted Osher and said, ‘I can teach this,’” Lopes says.

His first course, “Woodstock at 50” was offered the following semester, and drew enough interest to warrant another course, “The Devil’s Music,” an overview of the genre’s history from its inception through 1959—“the day the music died.”

Lopes, 78, expanded the scope of his research for “The Devils Music,” tracing rock and rolls’ musical roots from country & western, rhythm and blues, pop, jazz, gospel, and folk music and analyzing the impact of teenage culture, politics, business, technology and the racial strife of the time on the genre’s earliest pioneers.

Naturally, this course required a satisfying conclusion to the cliffhanger it had ended on—was 1959 the end of the prominence of rock music? Lopes answered this in his third course, “Sympathy for the Devil’s Music,” with a resounding no, and continued the narrative by explaining how early rock and roll had begun to morph into early Motown, surf music, contemporary folk, British blues, among other genres until, eventually, The Beatles rose to superstardom.

“In researching my history of rock and roll I’ve read many books and seen a lot of docs. I have my perspective now on what I like about certain eras, artists, and I particularly admire the creativity of the game changers,” Lopes says.

One of the most iconic of these many mid-century game-changers, of course, hailed from Liverpool, U.K. In his fourth course at Osher, Lopes compiled his research into a three-part series of lectures titled “Meet the Beatles You Thought You Knew,” an analysis of the band’s early years through the mid-60s.

This semester, Lopes is teaching his fifth course, “The Beatles’ Studio Years,” as a hybrid of in-person and Zoom presentations.

“The research is a lot of fun, I’ve put hundreds of hours into it. It’s my hobby—my toy trains. I bought premium YouTube without commercials and had to get ad blockers because I was watching so many documentaries,” Lopes says.

Lopes’ latest course offering shifts the focus from The Beatles’ earliest influences and rise in popularity to the transformation that had begun to take place around 1966, “when the Beatles went from craftsmen to artists.”

“Listen to the Everly Brothers’ harmonies and Little Richard’s ‘ooooh’s’ and you can hear all of those in the Beatles’ discography. One of those things that I show in my class is that there are some songs that were total punk, some that had early hip-hop elements, that they touched so many genres,” Lopes says.

In 1967, the Beatles shifted to a studio-only approach, becoming one of the first groups to really get behind the controls of the recording studio and dictate much of their own creative process. It was in this period that the band began experimenting with sounds from foreign instruments such as the Indian-made sitar, and took a bold series of creative and conceptual leaps with each subsequent release.

“It was the birth of some really creative stuff. The Beatles had just finished touring in April of 1967 and that was the first time they really had the chance to relax. They wrote over thirty songs, most of which ended up on the White Album,” Lopes says.

In regards to his personal sense of fandom, Lopes says the May 1967 release of Sgt. Pepper’s Lonely Hearts Club Band will always hold a special place in his heart. The first time he listened to it, he happened to be experimenting with the then-legal LSD.

“I was watching the album cover dance, and all of that. After that, I went back. I have to say Revolver and Rubber Soul were the most influential to me overall. There’s just so much interesting new stuff, it’s nuanced,” Lopes says.

Lopes could talk all day about The Beatles and music in general.

“The Beatles are bigger than four people. Ringo is the perfect drummer for this group. He did just one drum solo—he didn’t like doing solos. Him and Paul were an ideal rhythm section. Paul, George, and John had unbelievable three-part harmonies. John pushed the group to take risks. Paul really stepped up and coordinated the group especially after Brian Epstein died. They all had their strengths. The one I identify with the most was George, the quiet one. He’s a soft-spoken virtuoso,” Lopes says.

As a professor of the genre, Lopes doesn’t find it hard to choose his favorite rock album.

“My all-time favorite and very first CD I ever bought was Dark Side of the Moon. I listened to it on my first acid trip. I don’t understand the lyrics and I don’t care. But the way it blends and comes together, I couldn’t get enough of it and still can’t,” Lopes says.

Lopes could perhaps expand on this take in a sixth course. Or he could discuss the impact the genre as a whole has had on current-day music and popular culture. Wherever his research leads him next, the music of The Beatles—whom he first saw at Shea Stadium—will surely continue to play a role.

“Even to younger generations, the Beatles are timeless. Timeless! I have done a unit on Beatle memorabilia. People are still buying things. And they’re still making them. The Beatles stopped recording and broke up in 1970. Since then, in 25 years, there was the anthology series, played in six parts on CBS, which sold through the roof. The last several years they have reissued remasters. This stuff is selling like crazy. They are still very, very marketable and influential,” Lopes says.

More information on Lopes’ courses at the Osher Institute can be found here.