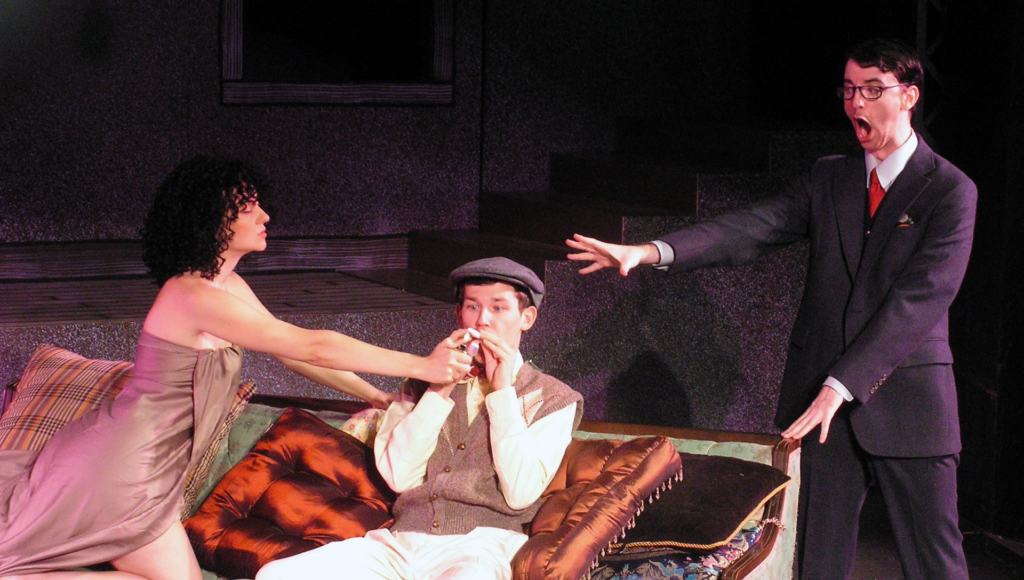 The music and book, both by Kevin Murphy and San Studney, are almost as good as the cast. A spoof of the craptastic 1936 pot-scare film of the same name, Reefer Madness is engineered for square-shocking, Rocky Horror-style cult status. As usual with this kind of thing, nothing here is all that shocking. The surprise is that so much is clever. Yes, Reefer Madness indulges in easy parody of all-American teens taking a puff and then jabbering, all red-eyed and sweaty, about their next fix. In its heart, though, it aspires to satire: not just of the scare tactics that frightened Americans once deployed against marijuana but also the scare tactics that frightened people — i.e., cultural conservatives — continue to use against everything.

The show purports to be a 1936 high school assembly designed to scare kids away from drugs. As “The Lecturer,” the tall, dark and goofy Doogin Brown is both concerned citizen and fright-night host. With a flag draped behind him, he declaims pot as a “leafy green assassin” and then gives a crash course in its horrors. It will make you a potty mouth, we learn, or it’ll make you sell your baby. A stiff-limbed beanpole capable of sudden elegance, Brown lowers his voice, cheeses up his delivery and makes good on the promise he showed two years ago when he stole a community-theater Fortinbras. He channels Groucho, Rod Serling, our own Ron Megee and every straight-arrow asshole who ever encouraged Congress to ban comics or hip-hop. He’s a dire clown here, one whose face — grave as a tombstone, with eyebrows black as permanent marker hitching up over the frames of his clunky glasses — is the best gag in a show bursting with them.

With choreographers Kendra Gunther-Burke and Tiffany Powell, Eubank has worked this cast of 11 until they’re as tight as a national touring company. As they tumble and jitterbug and hump in their underpants, they achieve a musical-theater hive mind. Equal parts comic and sexy, with a lockstep grace rare on Kansas City’s biggest stages, they shake their stingers and pollinate one another. It’s no surprise to see that chorus ringer Amy Hurrelbrink’s bio includes teaching dance. During a seductive tango at a soda fountain, she scissors one endless leg up, ultimately resting her foot over Ben Byard’s shoulder. Then, as he backs away, she stretches out into endless, angled splits.

K.C. Comeaux and Kelli Hahn give their all in two-note parts as Norman Rockwell kids slowly caught up in the world of reefer dens, but what you’re likely to remember is the exuberant invention of the production itself: the makeshift extravagance of the sets, props and costumes, all of which demonstrate that artists accustomed to making good on the cheap make even better when they actually luck into a budget. And Eubank’s direction makes two hours of swing music and drug jokes a high instead of a drag. Eubank is just a hair into his 20s, but he’s been doing this for so long, he has become the old reliable of Kansas City musicals. Other directors have a bag of tricks, but he’s packing a sackfull of ass-kick.

It’s unfair to consider Minds Eye Theatre’s take on Del Shores’ rural Texas camp comedy Sordid Lives the same week as Reefer Madness. Director Amy Eisele has her tricks, but she doesn’t have the cast, the resources, or — to be honest — the lunatic, life-sacrificing single-mindedness that sets Eubank apart. She does have Marilyn Lynch, playing a Texas woman whose sister has just died in scandalous fashion, which certainly helps. As Lynch bounds about a home that’s filling up with relatives, she cocks her skinny arms and legs out in the absurd angles of a character in a Don Martin cartoon. The show also boasts Amy Kelly as an agreeable country-music chanteuse, the funny Nick Uthoff as a gregarious good ol’ boy, and a bellowing Petra Allen as a septuagenarian barkeep.

That said, this is a nonprofessional production that too often feels like one. The pacing lags, lines are dropped, the sound effects never sync, and every time an actor yells, the dialogue is impossible to make out. Characters are cast with no attention paid to their physical selves, which makes hash out of a key comic scene where two gun-toting gals force the local men to strip down at gunpoint. Trisha Pasdach, who plays the overweight Noleta, is thin enough that she’s outfitted with a distracting padded ass, and Peter Hendrixson, who plays her fat, philandering husband, is in such great shape that he sports a fake belly. This means he can’t take his shirt off, even when Noleta forces him to slip on a bra and the scene depends upon his humiliation. Shores’ bawdy script and the better performances guarantee that this isn’t a total bust, but Minds Eye is making do instead of making theater.