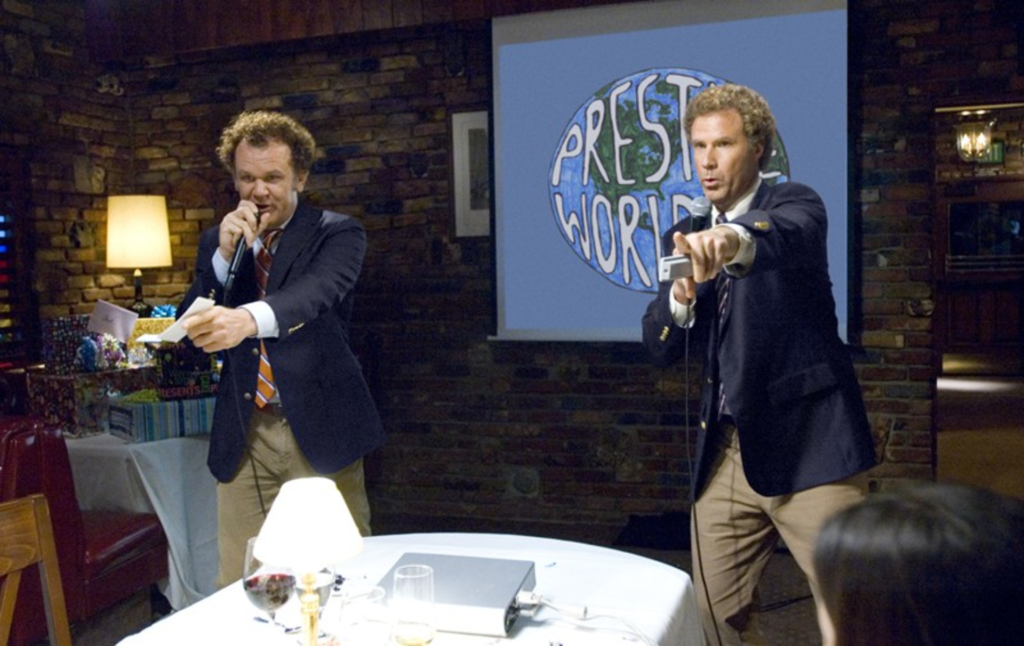 I haven’t seen much at the movies in the past two years that has given me as much unbridled comic pleasure as the sight of Will Ferrell as the win-at-any-cost NASCAR driver Ricky Bobby, calling on Jesus, Tom Cruise and Oprah Winfrey to put out the psycho­somatic flames engulfing his body in director Adam McKay’s 2006 Talladega Nights. Not much, that is, except Ferrell’s Brennan Huff — a 39-year-old, live-at-home mama’s boy with dreams of a professional singing career — belting out a heartfelt rendition of Bonnie Raitt’s “Something to Talk About” midway through the new Ferrell-McKay collaboration, Step Brothers.

In terms of showstopping musical interludes, that one turns out to be but a prelude to the scene in which Brennan and his 40-year-old stepbrother, Dale Doback (John C. Reilly), take to the stage and perform Andrea Bocelli’s “Por Ti Volaré.” Complete with an extended drum solo.

McKay and Ferrell, both Saturday Night Live alumni whose first big-screen collaboration was the 2004 TV-news parody Anchorman: The Legend of Ron Burgundy, relish working on an absurdist high wire. The point of their movies isn’t how any one scene relates to another but rather how much they can chip away at the logic that holds most ordinary movies together without causing the audience to revolt. The most inspired moments in their work — I’m thinking of Anchorman‘s rival-anchorman rumble or the TV commercial that suddenly appears in the middle of Talladega Nights‘ checkered-flag climax — are exercises in a kind of virtuoso lunacy in which anything goes and nothing is sacred. In Step Brothers, this means not one but two scenes of violent physical confrontation between Brennan and Dale and a pack of preteen playground bullies. If the thought of that doesn’t at least bring a smile to your face, this is definitely not the movie for you.

Step Brothers, which Ferrell and McKay cowrote after conceiving the premise together with Reilly, doesn’t offer much to explain why its newly minted stepsiblings, brought together under one roof after the union of their single parents (Richard Jenkins and Mary Steenburgen), have never left the nest or held a steady job — or, more to the point, why they seem to have stopped developing emotionally somewhere around the age of 12. This is well-traveled terrain for Ferrell, who has been cast as varying degrees of man-child in the likes of Old School, Elf and Wedding Crashers. But here, he and Reilly aren’t playing characters so much as they are personifying the ids of all those American males who either never learned to put away childish things or did and wish they hadn’t. Besides, if adulthood means turning into Brennan’s alpha-male brother (played to preening, carb-free perfection by Tom Cruise look-alike Adam Scott), who wants to relegate that rubber Chewbacca mask to the dark recesses of some closet in the first place?

Not to wax too serious here (this is, after all, a movie in which two nearly middle-aged men beat each other over the head with blunt instruments on their front lawn), but ticking away just beneath Step Brothers‘ free-associating surface is a fairly astute commentary on how we define such abstract concepts as “growing up” and “making something of yourself,” whether it’s with a wife and 2.5 kids, a six-pack of rock-hard abs or a seven-figure bank account. Does that make Step Brothers terminally juvenile or borderline profound? The question is par for the course in McKay and Ferrell’s comic universe. And just as we seem poised to figure it all out, we receive a cream pie to the face. Only the pie is loaded with avocado. And wait a second — that’s not even a pie.