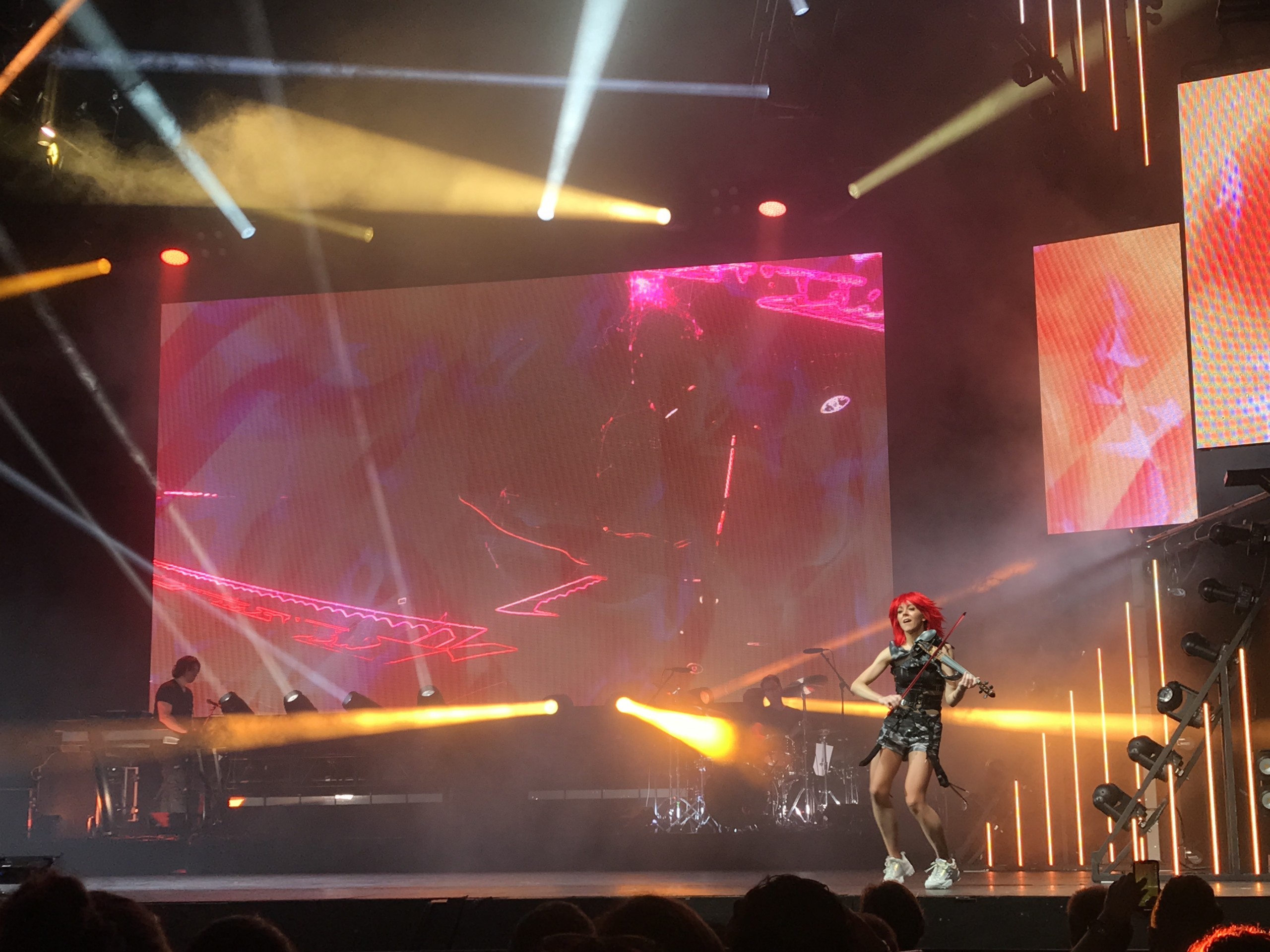 Lindsey Stirling at Starlight dressed as Artemis from the comic book companion to the Artemis album. // Photo by Lily Wulfemeyer

This Saturday, July 3, Starlight Theatre continued its season with its first concert since their pandemic shuttering. Their return concert was dancing violinist Lindsey Stirling, who was on tour for her Artemis album featuring special guest Kiesza.

Kiesza, Canadian house pop singer and instrumentalist, was joined on stage by Patty Schemel, the legendary drummer of Hole. Kiesza brought a pure magnetism to the performance that was remarkable considering Kansas City was the first stop on the tour. In her black and white jacket with gold detailing, and shimmery denim shorts over fishnets, she quite literally sparkled. (In short: a perfect outfit.)

Sans wild pyrotechnics, extensive lighting, and props, her performance felt more stripped-down, akin to the intimate solo experience of a much smaller venue. And not a single note was off as Kiesza rotated through different instruments. The energy of her set was infectious as she head-bobbed with the rest of the band, executed gymnastic backbends, and smashed the cymbals with the mic cord. 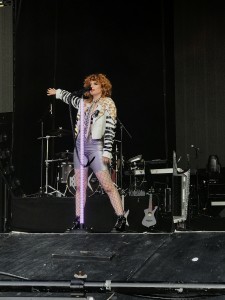 Kiesza performing at Starlight for the Artemis tour. // Photo by Lily Wulfemeyer

Most everyone at Starlight was getting back into the groove of large crowds post-pandemic, but it was Kiesza’s first time in front of an audience in four years. In 2017, she suffered severe injuries from a car accident that halted her career. Stirling was the first to invite Kiesza back on stage after years of rehab.

Her setlist mixed older hits like “Hideaway”, the track that caused her to go viral, with songs off of her 2020 album Crave. She even performed an acoustic number she had written just three weeks ago. It will likely be released over the course of the Artemis tour, she told the crowd.

Unlike Kiesza, Stirling’s entrance was theatrical. She swept on stage in a cloud of red smoke, with clips from the “Artemis” music video playing on the screen behind her. Always known for her fantastical garb, Stirling’s first Greek goddess-inspired costume was reminiscent of Aloy from “Horizon Zero Dawn”. Her electric violin was shaped like the bow that would be wielded by the goddess of the hunt herself.

Stirling has a knack for making a performance feel both esoteric and wildly human. Drawing from pop culture, fantasy, and video games, her work holds strains of Jeremy Soule and Amy Lee (who she has collaborated with a number of times), with a dash of ballet and cosplay. Throughout the show, she carried out costume changes from a masquerade ball-goer to a cryptid with deer antlers, and in between songs, she delivered motivational speeches about overcoming our personal demons. She’s been open in the past about her challenges with depression and an eating disorder, which heavily influence the themes in her music.

As for the songs and dancing: None of it felt particularly unique to her body of work. The virtuosic runs on the violin were as familiar as her high kicks. Stirling’s appeal isn’t necessarily her wildly inventive melodies, but her raw honesty about mental health and dedication to aesthetics across the entire production of an album and tour. She is, first and foremost, a performance artist seeking to tell a story.

And she had a few unique tricks up her sleeve this weekend. For the first time, she tried a choose-your-own-adventure number. Armed with her four backup dancers in pirate costumes, Stirling let the audience choose, through cheers, what scenarios they would act out. As the options were projected on the big screen, the crowd gleefully chose the most chaotic evil route possible. Thanks to us, Stirling got her pocket picked and her crew mutinied against her, hoisting her in the air on the fly system, to the tune of “Master of Tides”.

Stirling was certainly brave to go flying again. When she came to Starlight three years ago, she epically ascended to the skies on a lift only to have the tech stop working. She was stranded 20 feet in the air for ten minutes, she tells the audience. (They had to get a ladder to get her down. It looked terrifying.) And Starlight-goers remembered; when she was being rigged to the fly system, someone shouted, “Don’t get stuck, Lindsey!” 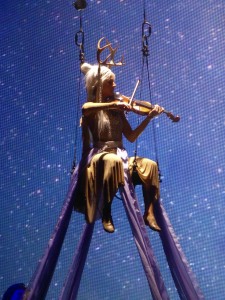 Lindsey Stirling in costume for her Artemis tour at Starlight. // Photo by Lily Wulfemeyer

Towards the end of the show, Stirling transformed into a new Artemis, the hero of the comic book that acts as the album’s partner piece. This character, represented on the album art, is vastly different from the woodsy, faun-like huntress of Stirling’s first act. With a spiky red wig and violin, comic book Artemis is leading the rebellion against the forces of “darkness”, such as depression and self-doubt.

Stirling explains her inspiration for this new character on her website.

“Every night [the moon] fights the darkness all alone; and even when she is only a weak, tiny sliver, she still has the courage to shine. [Sometimes] I too feel like a weak sliver covered in shadow—something I think we’ve all experienced in one form or another. Darkness is a part of life the same way it’s a part of the lunar cycle. But, like the moon (and like Artemis), we all have the ability to shine in the midst of great darkness, and eventually become whole again.”

As compelling as her storytelling may be, the heartfelt nature of the concert was marred by culturally appropriative costuming choices: One of her wigs was styled with Rastafarian locks. Then, in the final number before the encore, Stirling’s backup dancers swirled on stage in costumes that looked vaguely sari-inspired. The dancers’ formations and hand positions were a watered-down mish-mash of traditional Indian dance styles. All the while, mandala-like patterns swirled on the big screen. The display was embarrassing and disappointing.

Perhaps it feels easy to brush these microaggressions away and say that Stirling is just a musician. She’s not performing in the political circuit by any means. But fans don’t follow Stirling just for the dancing violin—her music transports listeners to another world where they, too, can be the main character. But one can only imagine that for some fans, it’s hard to enjoy the empowerment of the music in the face of such insensitivity. It was the first show on the tour, so here’s hoping that the Artemis tour team decides to reevaluate.

At the very least, the simple fact that Starlight has reopened in the last month is something to celebrate. (One could write an ode to their propellor-sized fans cooling the July heat.) After a year of watching musicians perform on Instagram Live and Reddit, being able to sit under the stars slurping sugar-forward margaritas and inhaling Dippin’ Dots was a gift from the open-air theatre to us.

Be sure to check out Starlight’s full season of concerts, Off-Broadway shows, and events here.

[Updated 7/6/21, 4:25 p.m.: A previous version of this article stated that this concert was Starlight’s reopening. The article has been updated to reflect that this is Starlight’s first concert since reopening; there have been other productions at the theatre in the last month.]

[Updated 7/7/21, 2:33 p.m.: A previous version of this article stated that the song that caused Kiesza to go viral was her unreleased “Oops”. The article has been updated to reflect that the song was “Hideaway”, which was released and can be listened to on her 2014 album Sound Of a Woman.]